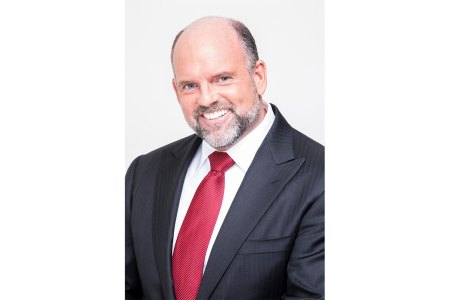 Like many children, Tracy Bouchard followed in his father’s footsteps. He was born in Tulsa, Oklahoma, and moved to Las Vegas, Nevada, as a young child. After graduating high school in 1983, he joined his father’s title company as a “runner.”

“As I reflect on this past year, it has been extremely fulfilling to see how the National Title team continues to serve our community under the Stewart Title brand,” said Tracy. “I am proud to see the legacy continues and reminds me of when I purchased National Title from my father in 2003.”

When Tracy took over, he oversaw continuous market growth and led a very successful local business for many years.

“The housing crash hit everyone hard,” recalled Tracy. “But I dug in and navigated us through one of the worst housing crises our country has ever seen.”

As the market came back, Tracy worked hard to rebuild, reorganize and redirect National Title to be the number one title agency in Nevada.

“I’ve always had strong employee retention, many of whom have worked with me for more than a decade,” said Tracy. “So as the years went on, I wanted to make sure I put National Title, and my employees, on the best path to success.”

As CEO, Tracy dealt with everything from human resources needs, finance and payroll, to IT infrastructure, and it became more and more difficult for him to focus on his customers and the industry. With the ever-evolving changes in regulations and procedures in the industry, as well as the rise of cyber fraud and attacks, Tracy felt National Title would benefit from being affiliated with a large organization.

As he began reaching out to title companies, he kept coming back to one company in particular.

“I’ve had a great history with Stewart Title,” said Tracy. “From 1983 to 1993, Stewart was my exclusive underwriter. During that time I got to know a lot a great people associated with Stewart. And moreover, as I had more conversations with them, I loved the Stewart story; the idea that they too were a family business and had been so for more than 125 years.”

“Tracy and his team in Las Vegas were a perfect fit for Stewart because of his devotion to customer service, and the values we share around integrity, loyalty, passion and innovation,” said Matt Morris, CEO, Stewart Title. “The more I got to know Tracy, the more I could see how he and his team could help us achieve our vision of being the most admired real estate services company.”

A year ago, Stewart Title and National Title worked out a merger deal, which Tracy believes was a win-win for both companies.

“Looking back, it was a great decision since we share the same values of serving the community with integrity and transparency,” Tracy explained. “Although joining any corporation has its challenges, especially coming from the agency world, the leadership at Stewart is remarkable and they have gone over and above to help accommodate us during the transition.”

Now, as the division president, Tracy can focus solely on what he’s passionate about: his customers, his brand, and building Stewart Title market share and growth in Nevada.

Tracy also has more time to focus on his community.

“We love our community, and I know that without their support, we are out of business,” said Tracy. “Each year, and throughout the year, the Stewart Title Team in Las Vegas look for ways to help the community and participate in local charity events whenever possible.”

This year, they took care of six families during the Christmas season by donating food, toys for the kids, and other essential items. They have a saying around the office:

“Winning in life is about caring for other people and believing in them – We will always do our best to live up to our customers’ expectations.”

Both organizations share the same values of community investment and continue to support larger initiatives throughout the year like Habitat for Humanity and Toys for Tots. For Tracy, community engagement and involvement builds comradery and teamwork.

“For me, Stewart Title is the new National Title, so to speak, 99 percent of my team that took this industry by storm and rose to the number one agency ranking in the Southern Nevada market still remain at Stewart,” said Tracy. “As Stewart, we have recruited some remarkable talent, and although we have a different name, it’s the same people with the same goal, to be the realtors and lenders number one choice in title companies.”