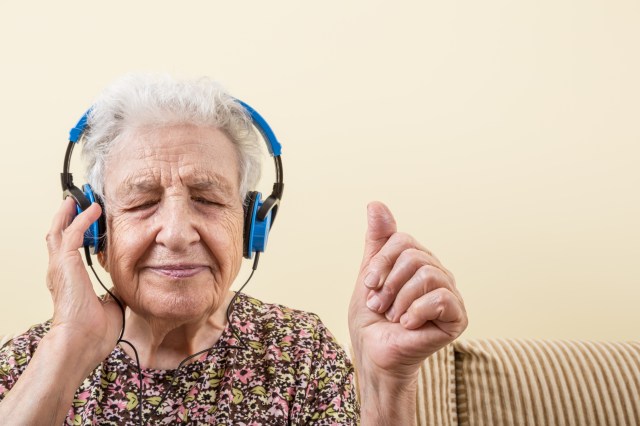 According to the Alzheimer’s Association, the number of Americans living with Alzheimer’s disease is growing — and growing fast. An estimated 5.7 million Americans of all ages have Alzheimer’s. Because the disease currently has no cure, researchers are continually looking for ways to improve the quality of life for those affected.

Studies have shown that music therapy can improve focus, the ability to communicate with loved ones, and may lower the dependence on psychiatric drugs for people affected by Alzheimer’s.

Music therapy offers a variety of benefits at each stage of the disease. This is especially true in the later stages of Alzheimer’s, when they may disconnect from anything happening around them and experience an inability to communicate and connect with others verbally. They may perk up and take a renewed interest in their surroundings. Upon hearing the music they might clap their hands or sing. One of the reasons for this is that responses to rhythm bypass the typical response process in the brain. Instead, it responds to the music directly and orders the body to respond; by clapping, swaying or humming to the music.

Memories of music are often preserved in those affected by the disease because key brain areas linked to musical memory are relatively undamaged by the disease. Researchers believe music stimulates many parts of the brain at the same time, such as those areas affecting language, mood and movement, along with the senses of hearing, sight, sound and touch. Research at the University of California at Davis pinpointed an area of the brain which stores memories by linking them to familiar songs and the emotions associated with those memories.

The affect a song will have on someone can often be determined by a person’s past emotional experience with that song. If the song reminds someone of breaking up with an old boyfriend, their response could be less positive than a song associated with happier memories. Alzheimer’s patients might show distress in such a situation by acting agitated, tense or making grimacing facial expressions. Music popular when a person was between the ages of 18 and 25 often promotes the most positive response.

Depending on the type of music, music therapy may help accomplish a variety of things. Stimulating music with a quick tempo and percussion songs can motivate patients to move their body or stay awake. Sedating music might prove more soothing. This type of music works well with patients who feel agitated or overloaded by their environment. In later stages, the disease causes patients to stop showing affection to others, but through dance or swaying to the music they may move closer to others or make affectionate gestures.

The 2014 documentary, Alive Inside, chronicles astonishing experiences of individuals around the country who have been revitalized and awakened by the simple act of listening to the music of their youth. It’s a must see. Don’t forget your box of tissues!

Farina Randolph is the Expressions Memory Care Director for Prestige Senior Living at Mira Loma in Henderson, NV. For more information on the services and community, visit https://www.PrestigeCare.com