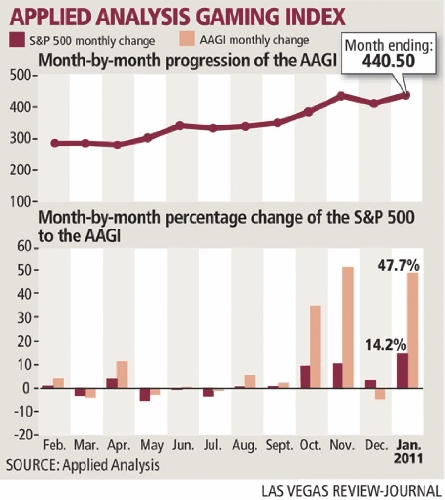 Investors had a positive outlook toward the gaming industry during January. The average daily stock prices for seven of the 10 casino companies and slot machine manufacturers charted by financial consultant Applied Analysis for its gaming index trended upward for the month.

"Gaming operators appear to be in greater demand as compared to equipment makers," said Brian Gordon, a principal with the firm.

The gaming index itself rose 24.5 points to 440.50, based on the various performances.

The nearly 13 percent increase by MGM Resorts was attributable to the company’s completion of $2 billion in refinancing for a portion of the debt covering the CityCenter project. The transaction extended maturities and reduced debt on some of the project’s credit agreements.

"The transactions also provide additional breathing room and flexibility as the market absorbs the various components of the CityCenter development," Gordon said.

Investors are focused on MGM Resorts, which operates 10 casinos on the Strip. Last week, billionaire financier Kirk Kerkorian, the company’s founder and largest shareholder, said his privately held investment arm would entertain offers for his 27 percent stake in the casino operator.

"We expect overall visitation to rise 2 percent to 3 percent in 2011, on the back of higher drive-in and more stable flight patterns," Beynon told investors last week. "Should airlines maintain capacity and patrons satiate the supply despite rising fuel costs, we believe Las Vegas multiples could be on the rise."

Las Vegas-based Ameristar Casinos was the only casino operator that saw its average daily stock price tumble in January, falling nearly 8 percent. Ameristar’s board of directors, which began a process last year to entertain sales offers for the company, took the regional casino operator off the market in December.

Slot machine manufacturers were hurt by news last week that an Illinois Appellate Court rejected plans that would have allowed locations around the state to add video slot machines. Also, International Game Technology reported a 10 percent decline in total revenue for its first fiscal quarter.

On Monday, IGT announced that its casino management system was selected for the upcoming opening of the Gun Lake Casino in Michigan, which is being managed by Station Casinos.