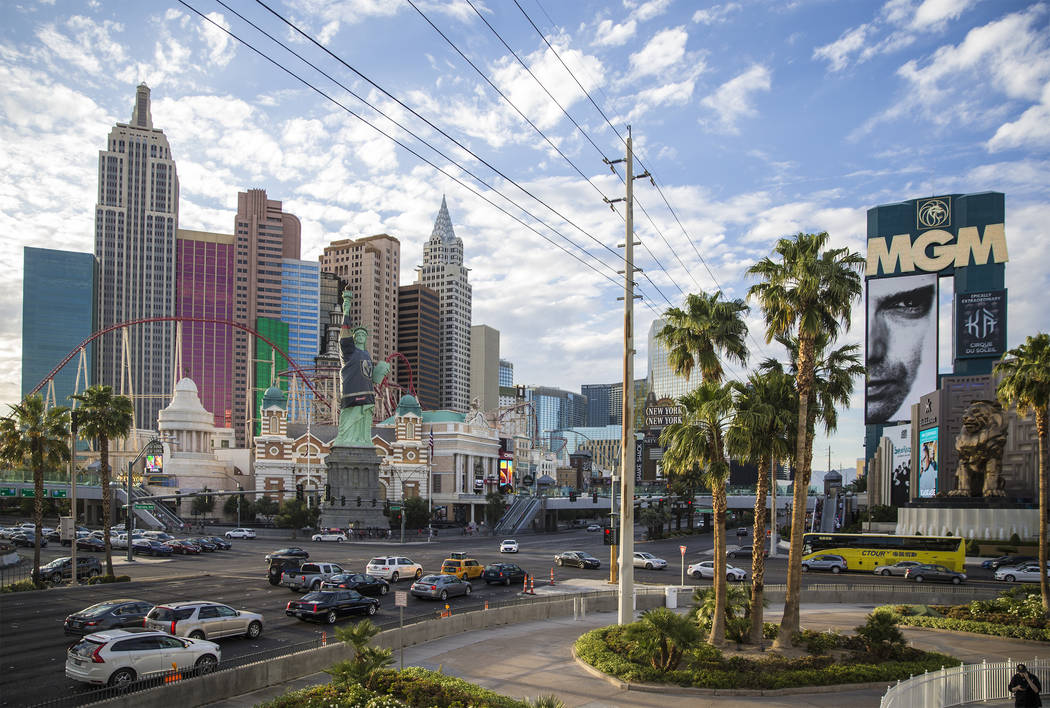 Nevada casinos made it three for three in 2018, collecting more than $1 billion in gaming win for the third straight month in March, the state Gaming Control Board reported Monday.

Visitation remained flat, according to the Las Vegas Convention and Visitors Authority, with volume down 0.9 percent to 3.75 million people.

Downtown Las Vegas was off 14.2 percent to $54 million and North Las Vegas and the Boulder Strip also were down for the month.

The three-month totals for gaming win for the first quarter of 2018, generally a more accurate indicator of current trends, shows win up 2.8 percent statewide, 2.3 percent in Clark County, 3.3 percent for the Strip and down 3.8 percent downtown.

It was 38th time the state has recorded more than $1 billion in monthly win, a level first achieved in March 2005. The highest monthly win ever came in October 2007 when the state recorded $1.165 billion.

It was the first back-to-back-to-back billion-dollar win months since February through April 2008, according to Michael Lawton, senior research analyst for the Tax and License Division of the Control Board.

The state recorded billion-dollar win totals for eight straight months from October 2006 to May 2007, the all-time record.

“For the Strip, the story was an extremely strong baccarat month in both volume and win,” Lawton said in an email. “The Strip has now recorded consecutive increases after four consecutive decreases and is up 3.3 percent for the calendar year.”

Downtown’s severe drop for the month was due in part to the discontinuation of operations at the Lucky Dragon, which is counted as a downtown property, and closed its casino and restaurants in January.

March also ended on a Saturday, creating a tough comparison with March 2017 and affecting slot revenue counts downtown and in locals markets. Lawton said he expects the revenue trend to reverse in April.

On the visitation side, the 0.9 percent decline marked the 10th straight month in which year-earlier figures outpaced current months.

While most categories were outpaced by those recorded in March 2017, totals this year were still the best of the year in five categories, including visitor volume, citywide occupancy, room nights occupied, air passengers, and average daily highway auto traffic.

Visitation was hurt by a 13.9 percent downturn — 652,400 people — in convention attendance. The decline was attributed to not having ConExpo-Con/Agg, a major construction industry trade show, in town in 2018. The show, which occurs every three years, brought 129,000 attendees to Southern Nevada in March 2017.

While March’s 92.7 percent occupancy rate was the best this year so far and would have been the third best in 2017, it showed as a 1.3 percentage-point decline against March 2017 when the rate was 94 percent, thanks, again, to ConExpo.

For the second straight month, the LVCVA said the implementation of updated accounting rules at some resorts have altered average-daily-room-rate and revenue-per-available-room calculations. The agency said the calculation is an accounting procedure followed by some but not all resorts so the LVCVA didn’t list those statistics. Officials said restated figures for affected months would be released later in the year.