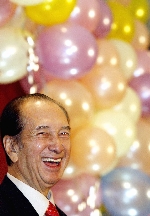 The transfer of Stanley Ho’s Macau casino holdings to family members has turned into a soap opera.

A day after it was announced that the 89-year-old Hong Kong billionaire had moved nearly his entire Macau casino ownership stake to several of his 17 children, a Hong Kong lawyer said the transfer took place without Ho’s consent.

A few hours later, Ho’s family members produced legal documents they say were from him, showing the allocation of shares in his Hong Kong-based corporation represented his wishes. The family members also said the lawyer was fired.

Ho, who has been recuperating from brain surgery since 2009, had a 40-year monopoly on casino activity in Macau when it was a Portuguese colony.

SJM announced the transfer of Ho’s interest in the company, valued at $1.7 billion, to two companies operated by family members. He retained about 100 shares in SJM.

“This is robbery,” Oldham quoted Ho as having said Tuesday.

Ho plans to initiate legal proceedings in Hong Kong if the matter is not resolved by today, Oldham said.

The family members accused by Ho of wrongdoing said they had acted with his consent.

The documents, according to Bloomberg News, say that Ho is abandoning his legal action, considers the share allocation in the family company completely fair, and will solve domestic matters “behind closed doors.”

One document is handwritten and the other printed on his personal letterhead and bears his apparent signature.