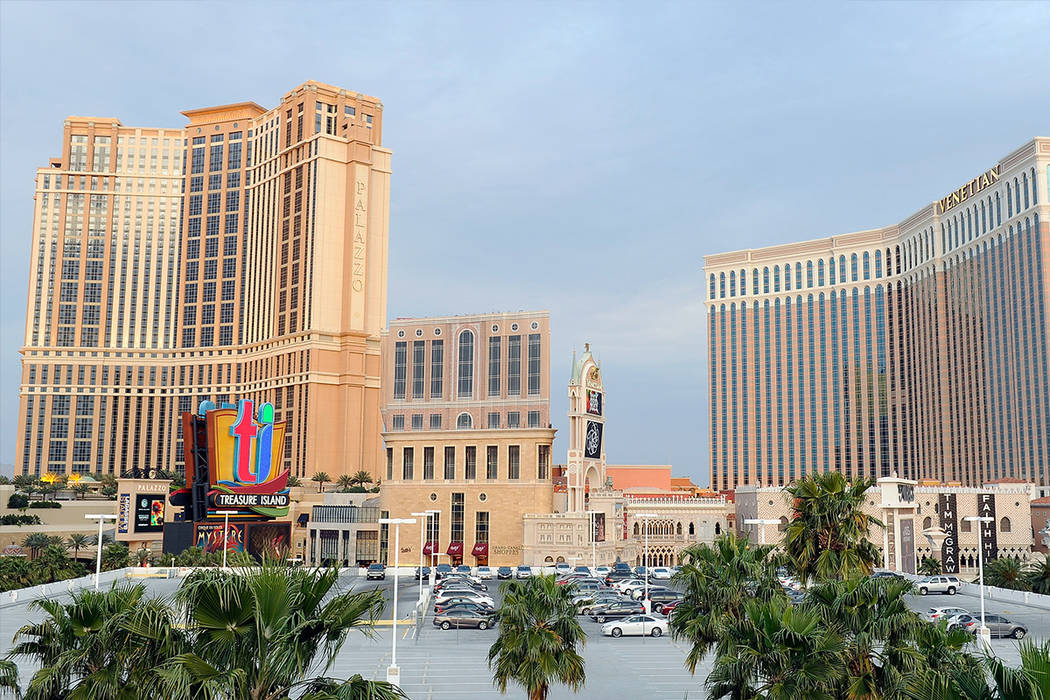 The Venetian and The Palazzo. (David Becker/Las Vegas Review-Journal)

The company that owns the Las Vegas Strip’s Venetian and Palazzo resorts set numerous benchmarks for the quarter that ended March 31, including highest mass table gaming drop by revenue, highest retail mall sales and highest cash flow margin since the third quarter of 2006.

“At the same time, we received an all-time quarterly record in adjusted property EBITDA (earnings before interest, taxes, depreciation and amortization) in both Singapore and Las Vegas,” Sands Chairman and CEO Sheldon Adelson said in a Wednesday conference call with investors. “As I said last quarter, the G in my middle name stands for Gary, but it also stands for growth, and that was fully on display at present in each of our markets.”

The company outpaced the estimates of 13 Wall Street analysts for revenue and earnings. Sands also said it paid a 75-cents-a-share dividend during the quarter and will pay another June 28 to shareholders of record on June 20. The company also repurchased 1 million shares of stock valued at $75 million to enhance shareholder value.

The results were most impressive in Macau, where Sands is the dominant player in the world’s most lucrative gaming market.

The company is replicating its successful Las Vegas growth formula in Macau. Chinese travelers are coming from farther away to experience Sands’ array of entertainment, shopping and spas in addition to gambling.

“They come from further away, and I think they’re very lifestyle-driven,” Sands President and Chief Operating Officer Rob Goldstein said on the earnings call.

“The way it’s described to us is that the acceleration of younger people who are very affluent bring their families, want to stay as much as four nights, they want to see Bruno Mars or whoever the star is that weekend, they want to shop at the stores, they want to go to the spa and they like to gamble,” Goldstein said. “It’s quite a great combination. So they stay longer, they gamble more and have more time to spend in our shops.”

“Most positive is that the acceleration of demand outside Guangdong is incredible and I think when you start seeing (increased transportation from Hong Kong on a new bridge) it’ll be even better for us,” Goldstein said.

The Hong Kong-Zhuhai-Macau Bridge is expected to open in July, which could open a new segment of traveler that won’t be dependent on travel by ferry.

Goldstein said Las Vegas also had an extraordinary quarter, even though casino hold percentages were within normal parameters.

“I’ve been here since the open and that’s the best quarter in history so we’re doing something very right,” he said. “To make $140 million in Las Vegas for a quarter without doing something lucky, that’s pretty exceptional results.”