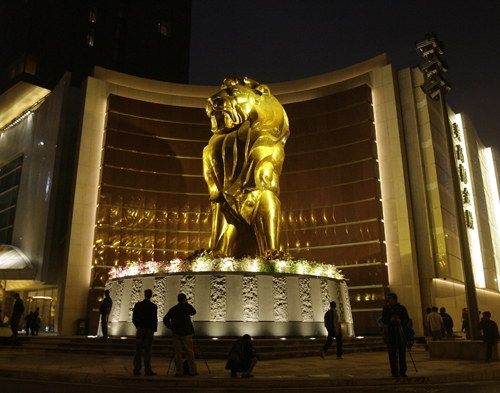 The question on the minds of many, however, is how long will it be before any rebound takes effect?

MGM Resorts Chairman and Chief Executive Officer Jim Murren told analysts and investors the company’s Strip resorts already are experiencing some signs of recovery. Spending by customers increased in January at the company’s resorts, which have reported a double-digit increase in advance convention bookings.

“The company is playing more offense than we did in 2008 and 2009 and early last year,” Murren said. “We’re no longer a liquidity story, we’re a recovery story. Our balance sheet is in tremendous shape, CityCenter is more profitable and we’re starting to recover some of the markets that we lost in the great recession.”

The company, which operates 10 casinos on the Strip, including the massive CityCenter development, narrowed its net loss for the quarter that ended Dec. 31 to $139 million, or 29 cents per share. A year ago, MGM Resorts lost $434 million, or 98 cents per share.

MGM Resorts extended the maturity of its $3.5 billion credit agreement to 2014 and raised an additional $3 billion of debt and equity capital during 2010. As of Dec. 31, the company had approximately $12.3 billion in long-term debt and has roughly $1.2 billion available for borrowing under its credit agreement.

D’Arrigo said the corporate balance sheet was improved by raising capital and extending debt maturities at the corporate level and through the company’s two 50-50 joint ventures, MGM Grand Macau and CityCenter.

“We remain focused on continuing to strengthen our balance sheet, growing cash flows and positioning our resort portfolio for future growth,” D’Arrigo said.

Unlike competitors Wynn Resorts Ltd. and Las Vegas Sands Corp., which collect roughly 80 percent of their revenues and cash flow from their casinos in Asia, MGM Resorts relies on the Strip for about 70 percent of those figures.

“Results show there is room to grow, particularly on the occupancy side in Las Vegas,” Cappaert said. “Our outlook assumes slow growth in demand, which should help to fill rooms, particularly with higher-yielding convention business.”

MGM Resorts received approximately $192 million from the MGM Grand Macau, which represents a full repayment of the company’s interest and noninterest-bearing notes to the joint venture.

“Macau provided an important upside surprise in the quarter, while the Las Vegas operations were more in-line, except for CityCenter, which remains challenging to forecast, in our view,” Jefferies & Co. gaming analyst David Katz said.

CityCenter, which opened in December 2009, had net revenues of $257 million in the quarter, including $26 million related to residential operations. About $8 million of the condominium revenues were attributed to forfeited residential deposits. The company said it took a $27 million impairment charge related to inventory at the all-residential Veer Towers.

Aria, CityCenter’s centerpiece 4,004-room hotel-casino, had net revenues of $198 million and hotel occupancy of 80 percent during the fourth quarter. Aria’s average daily room rate was $190 in the quarter. The company said the revenue per available room at Aria, a nontraditional profitability measurement, grew 7 percent from third quarter 2010.

CityCenter CEO Bobby Baldwin said Aria had $225 million in gaming revenues in the second half of 2010, compared with $125 million in the first six months of the year.

Baldwin said Aria accounts for about 26 percent of the Strip’s baccarat market.

The Crystals retail center was approximately 80 percent occupied by the end of the year. In addition, Baldwin said all of CityCenter’s components were profitable in January, including the nongaming Mandarin Oriental Hotel, which lost $1 million in the fourth quarter.