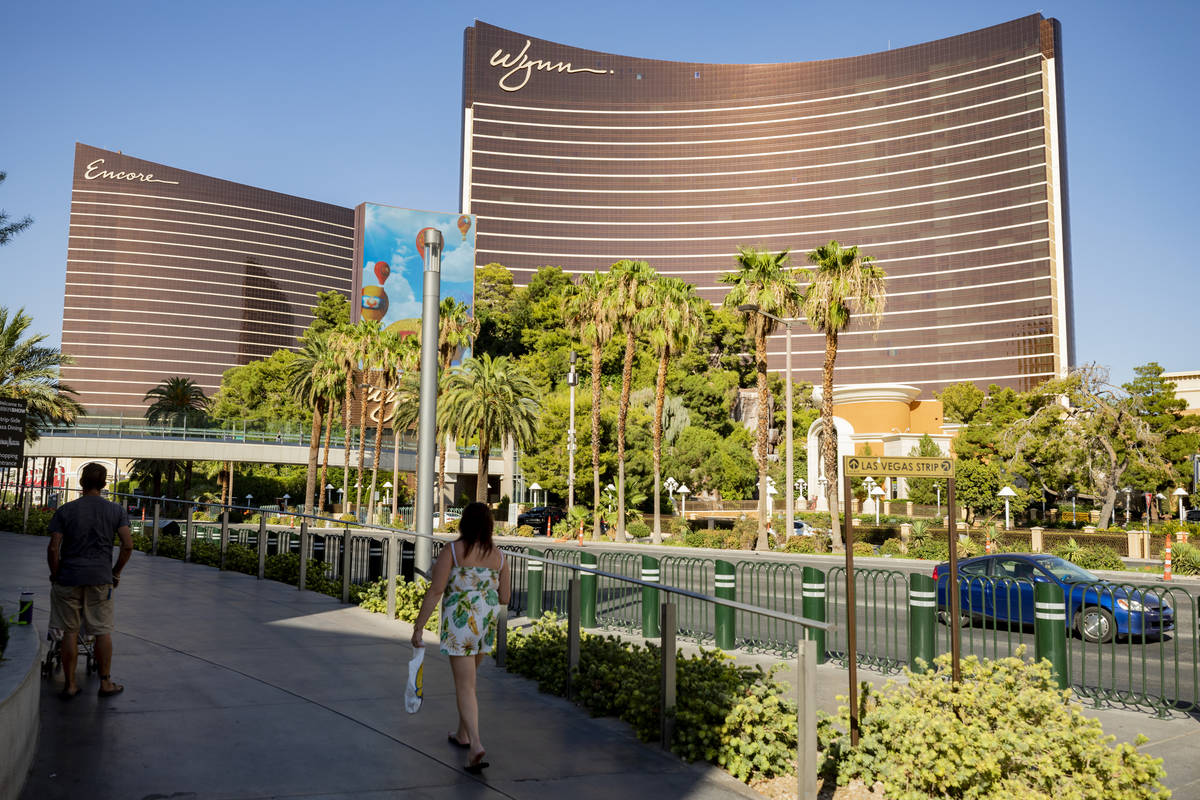 A view of the Wynn Las Vegas and Encore along the Las Vegas Strip in 2020 in Las Vegas. (Las Vegas Review-Journal)

Las Vegas-based Wynn Resorts Ltd. reported its seventh straight quarterly loss in net income Wednesday, but company executives say they are encouraged by the steady return of customers and bookings in the future.

“We were pleased to see the strong return of our guests at both Wynn Las Vegas and Encore Boston Harbor during the second quarter with adjusted property cash flow at our U.S. operations well above prepandemic levels, highlighting the significant pent-up demand for travel and leisure experiences,” Wynn CEO Matt Maddox said Wednesday.

In a conference call with investors, Maddox said that the company’s emphasis has been on keeping room rates high to attract premium customers and that even without international high-end play and conventions, cash flow grew higher with every month in the quarter that ended June 30.

He said occupancy rates have consistently been around 90 percent on weekends and 80 percent at midweek.

Wynn Las Vegas President Marilyn Spiegel said the company currently has the highest number of group reservations for conventions and trade shows in history for the second half of the year.

Macao, which, like the United States, is facing an increase in coronavirus infections amid a 44 percent vaccination rate in both Macao and nearby Hong Kong, closed borders once again on Tuesday.

“While there have been some fits and starts along the road to recovery in Macao, we were encouraged by the strong demand we experienced during the May holiday period, particularly in our premium mass casino and luxury retail segments,” Maddox said.

Wynn has three resorts in Macao, including the high-end Wynn Palace on the Cotai Strip across the street from MGM Cotai.

Maddox says Wynn will be “a real player” in sports wagering. The company added a partnership with the National Football League Detroit Lions and Major League Baseball’s Colorado Rockies during the quarter and is close to showing off the new WynnBET Blue Wire podcast studio being built at Wynn Las Vegas and opening before football season.

“Our WynnBET online casino and sports betting app is currently available in six states with additional launches planned over the coming months,” Maddox said. “We continue to enhance our product with frequent new feature releases and are advancing our marketing and branding strategy as we approach the upcoming NFL 2021 season.”