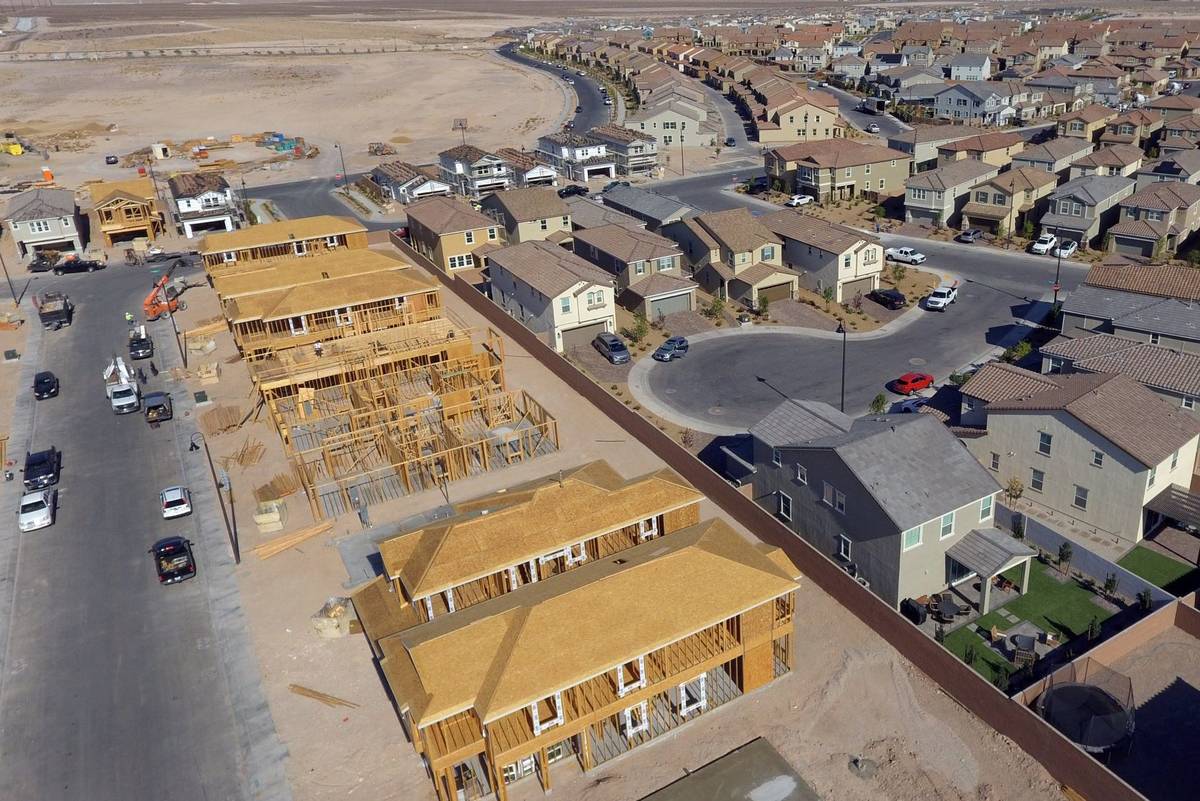 An aerial view of new homes under construction near Democracy Drive and Palindrom Avenue, on Friday, May 7, 2021, in Henderson. (Bizuayehu Tesfaye/Las Vegas Review-Journal) @bizutesfaye 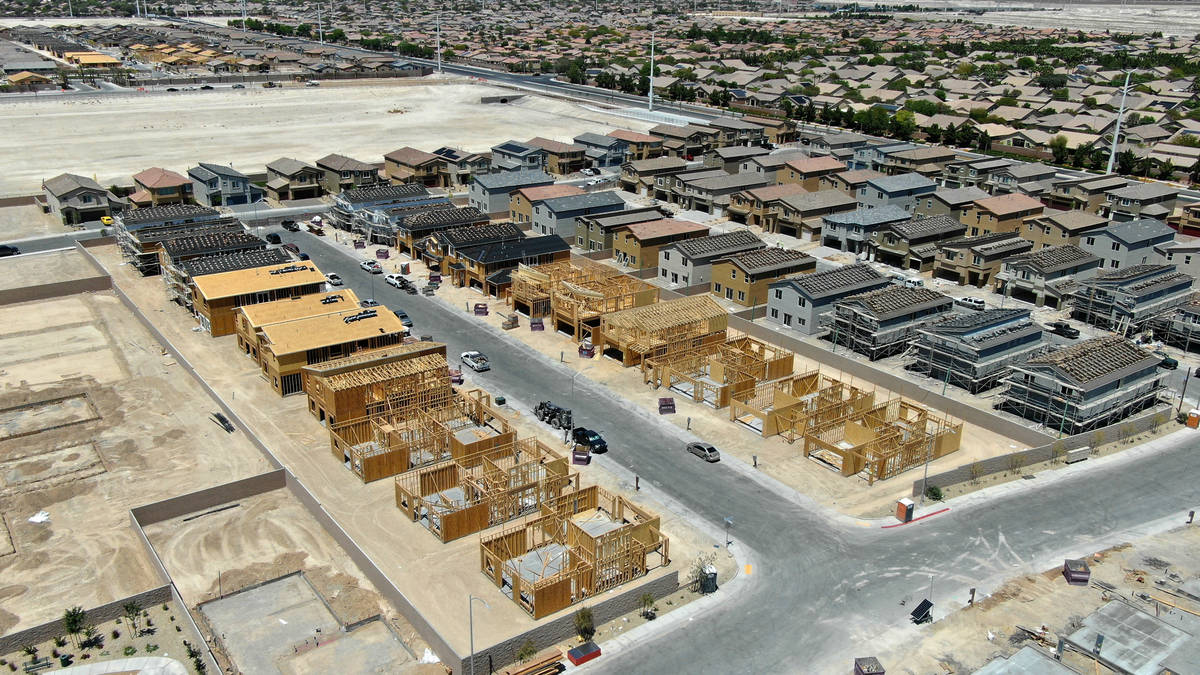 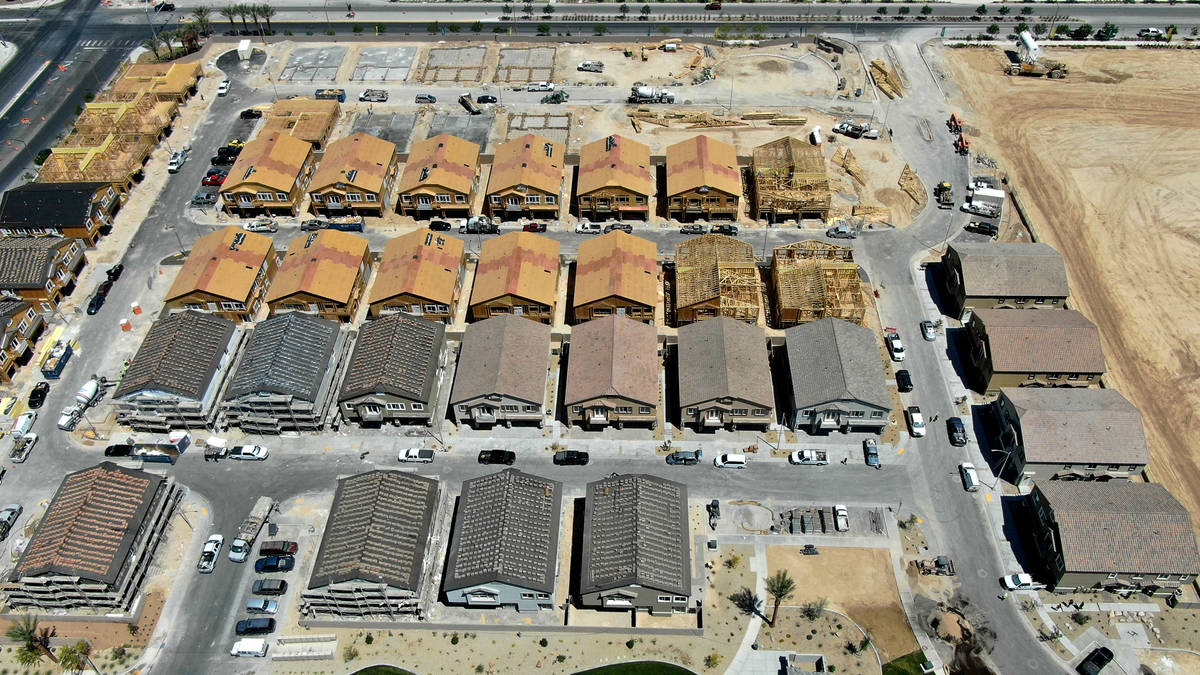 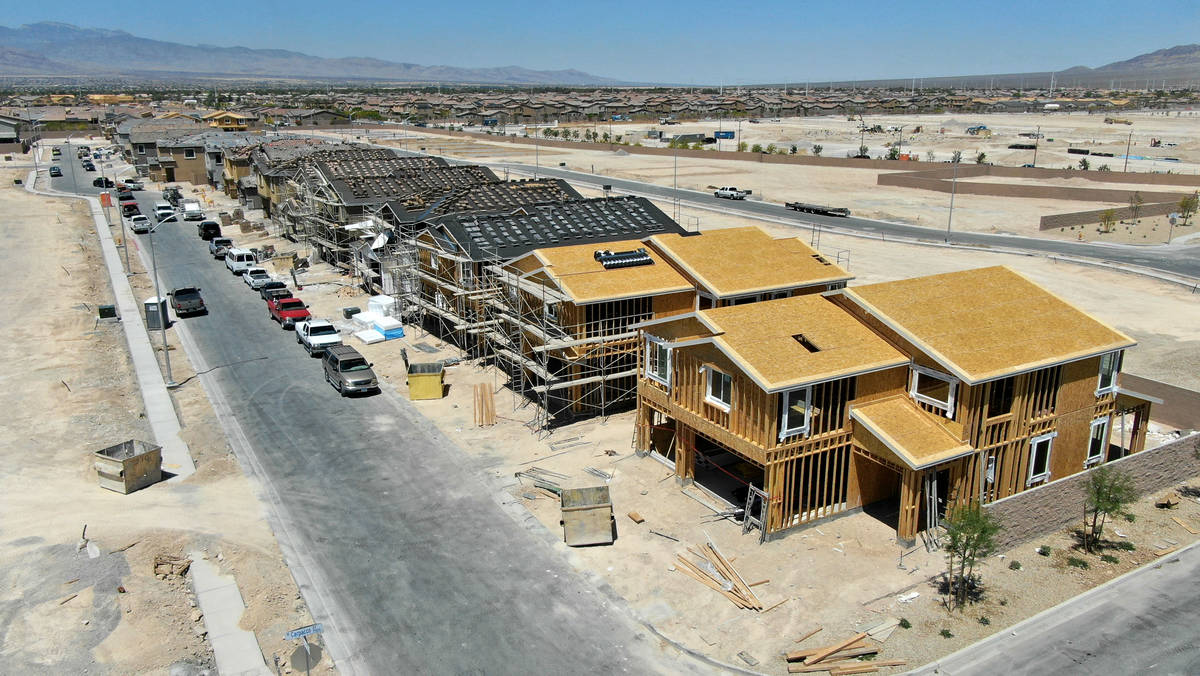 Homebuilders continue to raise base asking prices, and the median sales price for closed transactions in May was $402,990, an all-time high, according to the firm’s records going back to 1990, Smith reported.

He attributed the higher prices to builders’ increased costs and the “hot” housing market.

Housing markets across the United States accelerated in recent months with rapid sales and rising prices, fueled largely by rock-bottom mortgage rates that have let people lock in lower monthly payments and stretch their budgets. In Southern Nevada, median resale prices have set all-time highs practically every month, and buyers have flooded properties with offers.

Amid the surge of demand, local builders have regularly raised prices and put house hunters on waiting lists. At least one developer, KB Home, has drawn names to select buyers, telling the Review-Journal in April that it does this at certain communities where “demand greatly exceeds supply” and that it’s a “fair and equitable way to proceed.”

Locally and nationally, however, housing has been showing some signs of a cooldown lately during the normally busy spring buying season.

“The housing market was going 100 miles per hour, and now it’s down to 80,” Daryl Fairweather, chief economist of listing site Redfin, said in a report in early June.

Nationwide, the pace of homebuilders’ sales last month fell 5.9 percent from April to the slowest rate in a year, according to a recent federal report. The median sales price last month, $374,400, was up just over 18 percent from May of last year.

Resales have also slowed, as the National Association of Realtors recently reported that sales of previously owned homes fell for the fourth consecutive month in May.

According to the association, the median sales price last month, $350,300, and year-over-year price jump, 23.6 percent, were both record highs since 1999.

In Southern Nevada, resales have fallen the past few months, and the tally of available listings, while still low, has ticked higher, according to figures from trade association Las Vegas Realtors.

Moreover, customer traffic for local homebuilders in May was down 25 percent from its recent peak, set in March, Smith recently told the Review-Journal.

In his latest report, Smith wrote that builders often hold back the number of lots they release for sale to help ensure “acceptable” completion times.

Construction costs have climbed, and builders do not want to lock in a price on a home that they can’t start relatively quickly, as they may lose profit margins if it costs more than expected to build the house after the buyer signs a sales contract, he added.

Despite the recent pullback, homebuilders’ sales this year far exceed 2020 levels. Builders reported 6,413 net sales this year through May, up 60 percent from the same stretch last year, according to Smith.

He also noted that sales activity was picking up after a two-week “lull.”

Overall, the recent slowdown seems to be “more of a ‘blip’ rather than a sustained trend,” he wrote. 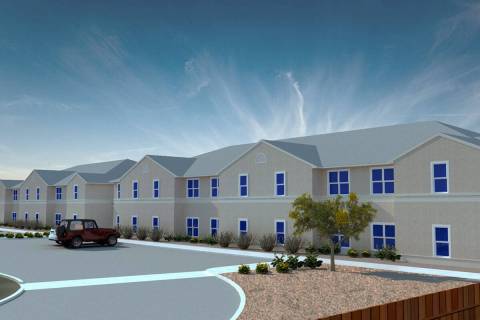