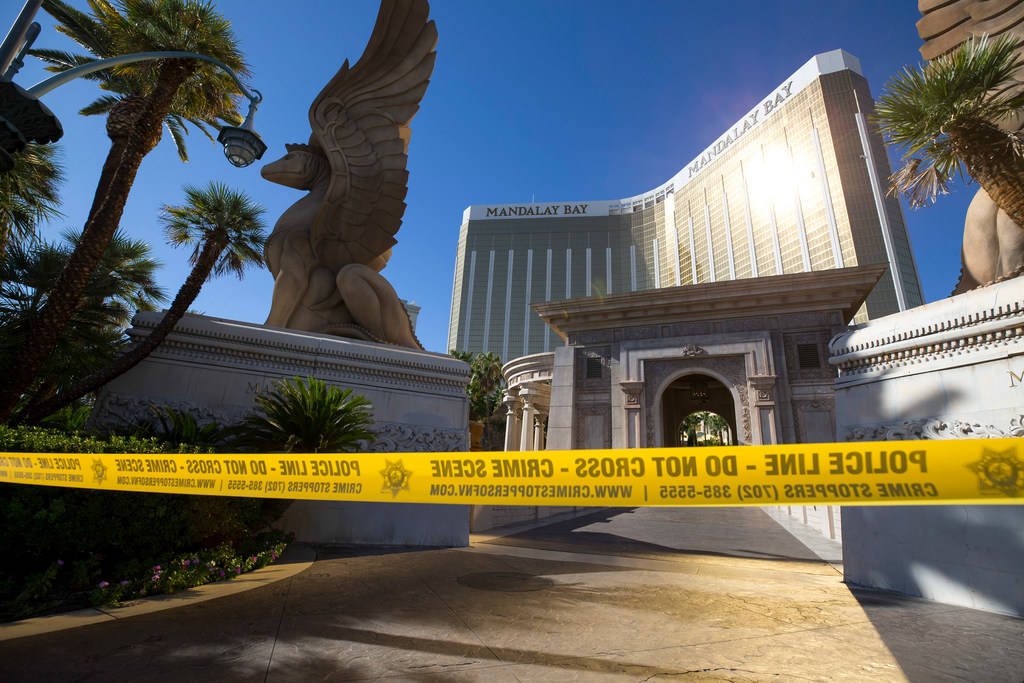 Las Vegas police pat down people and scream orders at others in the latest batch of body camera footage released Wednesday from the Route 91 Harvest festival shooting.

The 34 new videos were all filmed sometime after the gunfire ended. They captured worried friends and relatives asking officers near the scene for answers and confused civilians asking for directions. In some, a panting Las Vegas police canine occasionally pops into frame.

The clips marked the 19th court-ordered release since early May of Metropolitan Police Department audio, video or documents from the Oct. 1 shooting, which left 58 concertgoers dead and hundreds more injured.

Just west of the Strip, an officer walks through traffic lanes on Tropicana Avenue in the longest video released Wednesday. The video lasts about 48 minutes.

As the officer passes each car, he warns drivers that Las Vegas Boulevard is shut down because of an active shooter.

Unfazed by the information but upset about the traffic, one man asks, “How long do you guys think it’s going to be?”

“I can’t tell you,” the officer replies. “I know there’s a lot of victims.”

In the background, ambulance after ambulance zooms toward the Strip, sirens blaring. At one point, a small white car tries to follow paramedics to the scene.

The driver says someone he knows is “dying in there.”

A woman in the passenger seat shouts, “We need to get there!”

“I get it,” the officer says calmly. “There’s ambulances going right now. There’s officers being shot and everything right now. I get it.”

Frantic, the woman in the passenger seat shouts at the man to turn around.

“We’ll find another way!” she yells, crying. “Where there’s a will, there’s a way! Turn around!”

The officer counters that the Strip is “completely locked down.”

“We can’t just leave her there!” the woman screams.

Suddenly, the driver flings his door open and starts running toward the Strip, ignoring the officer’s protests. The woman jogs around the back of the car, then takes the wheel.

“You’re gonna make a U-turn right here and wait for him to bring her to you,” another officer says encouragingly.

The video later ends with the first officer, who said he had military experience, mentioning that his “PTSD is acting up.”

Another video shows officers shouting at and briefly detaining three women behind a dumpster at a CVS Pharmacy on the Strip after a call came in saying the women were armed.

Weeping and handcuffed, the women say they do not have weapons. When officers realize they don’t, they let them go.

A separate video filmed near the shooting scene captures a woman asking to grab her backpack from the festival site.

When an officer tells her she can’t do that, she starts to sob.

He tells her to cross the street and try to get a cab, but she says she has no money. On a night like this, he assures her, they will take her anyway.

Another video shows an officer trying to find someone to take a father and daughter to Metro headquarters, the first designated gathering place for those with missing friends and relatives.

“Is that your patrol car right down there?” he asks a fellow officer. “I feel like you’re the only one that doesn’t have blood in the back of it.”

The newspaper and other media organizations sued for the records in the days after the shooting. Metro fought their release for months, then began handing over the records in batches of varying size and type after a court forced the department to comply.

Metro has said it will release more records next week.

The department released its own 187-page report on the shooting investigation in early August. A separate FBI report is expected sometime after the first anniversary of the shooting.