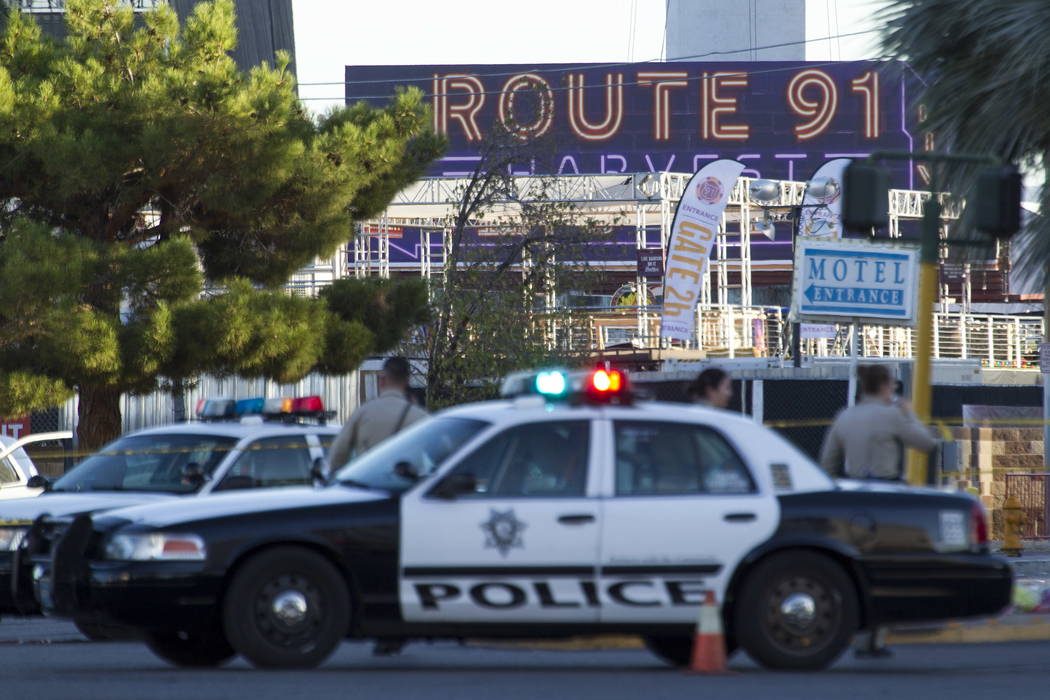 A scene from Oct. 2, 2017, the day after the Route 91 Harvest festival shooting in Las Vegas. (Richard Brian/Las Vegas Review-Journal)

The latest batch, turned over Wednesday, consisted of 46 new body camera videos. It marked the 21st court-ordered release since early May of Metropolitan Police Department audio, video or documents from the Oct. 1 massacre, which left 58 concertgoers dead and hundreds more injured.

In one of the new videos, a man approaches an officer stationed at a triage area on the Strip and asks how to get to Sunrise Hospital and Medical Center.

The officer asks if she’s alive. She was shot in the arm, the man says. The officer suggests he find a taxi.

When the man asks if the attack is over or if the shooter is in custody, the officer says, “It’s still active.”

Another video shows a team of officers at Mandalay Bay clearing the backstage area of the Michael Jackson Theater, where hundreds of people took shelter in the hours after the tragedy. The officer with the camera walks through offices, back hallways and training rooms, making sure they are clear.

At one point, the officer positions himself at a door near the stage and asks for water.

One woman warns him to avoid some bottles.

“Be careful, don’t touch those because those are pee,” she says.

“Are you serious?” the officer asks before he is interrupted by someone.

Long after the shooting ended, a separate clip shows an officer positioned just outside the festival grounds, where he was asked to deny access to anyone who wanted to go inside, except for homicide detectives.

“Were you working out here tonight?” another officer asks him.

“It’s supposed to be an easy gig,” the other officer says.

He was working traffic control when his intersection was suddenly sprayed with bullets, he explains.

He says it wasn’t until later, when he was hiding behind a wall, that he felt the rounds ricocheting and realized, “Oh, this is real.”

Police previously released more than 3,000 pages of witness statements and officer reports, as well as 911 calls and additional body camera footage. A Las Vegas Review-Journal examination of those records found that many officers experienced communication problems during the shooting response.

The newspaper and other media organizations sued for the records in the days after the attack. Metro fought their release for months, then began handing over the records in batches of varying size and type after a court forced the department to comply.

The department released its own 187-page report on the shooting investigation in early August.

A federal report released this month found that Las Vegas police and Clark County firefighters channeled their training well but failed to follow some protocols during their response. The document presented 72 lessons learned.

A separate FBI report is expected sometime after the first anniversary of the shooting.