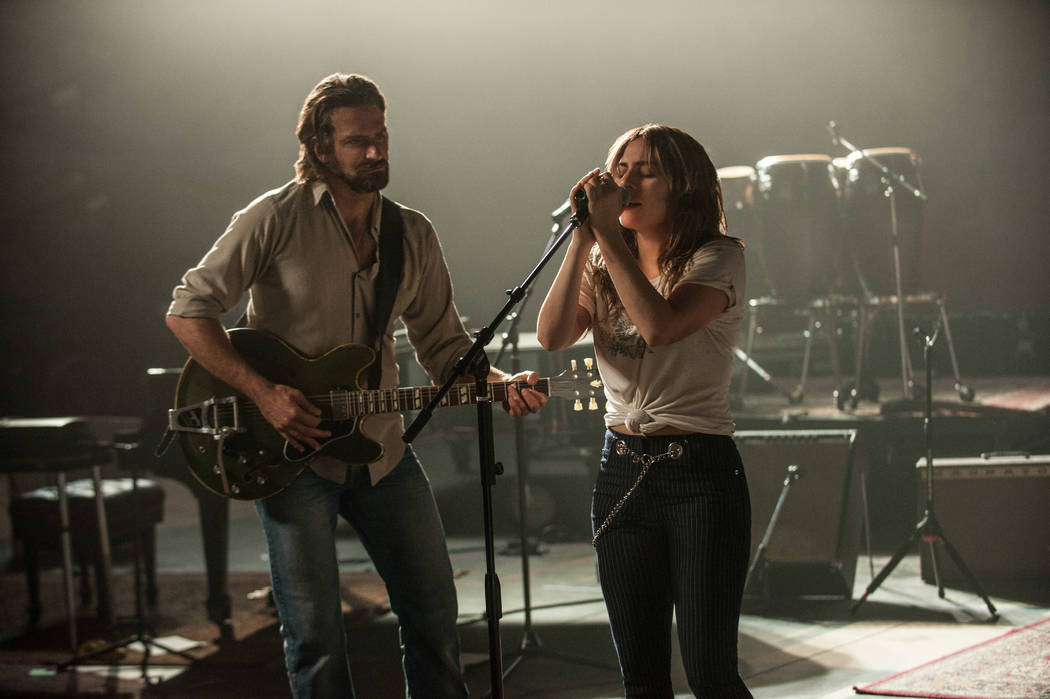 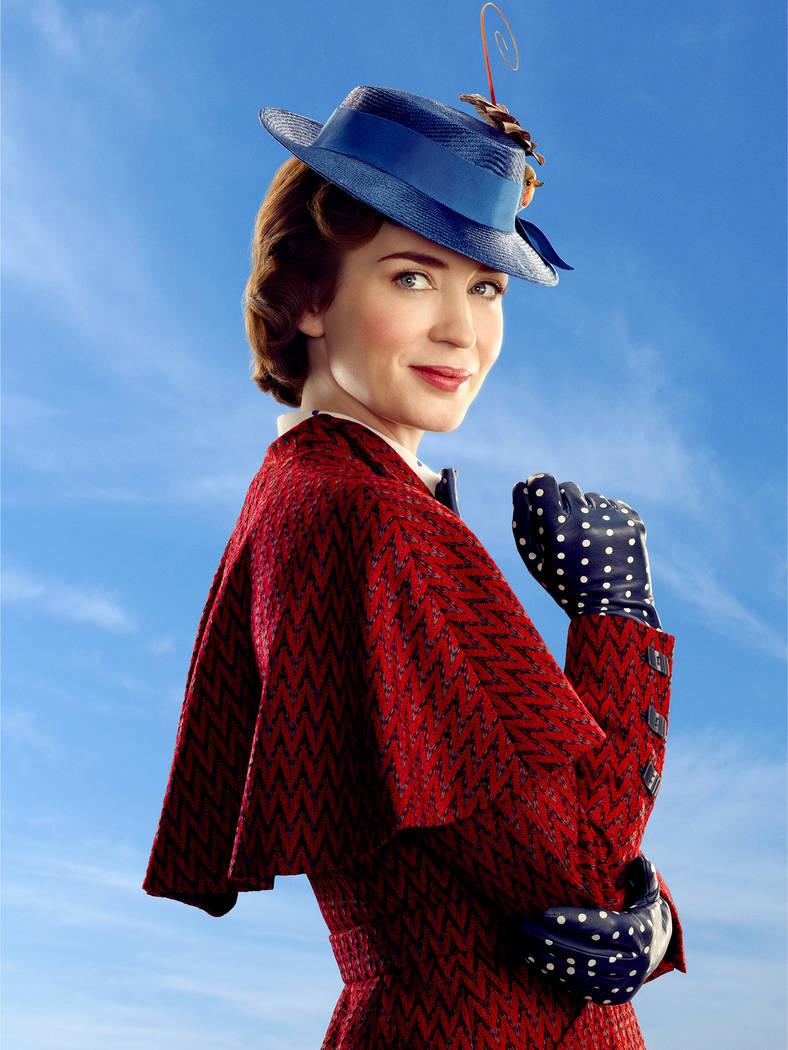 Mary Poppins (Emily Blunt) in Disney's original musical "Mary Poppins Returns", a sequel to the 1964 M"Mary Poppins" which takes audiences on an entirely new adventure with the practically perfect nanny and the Banks family. 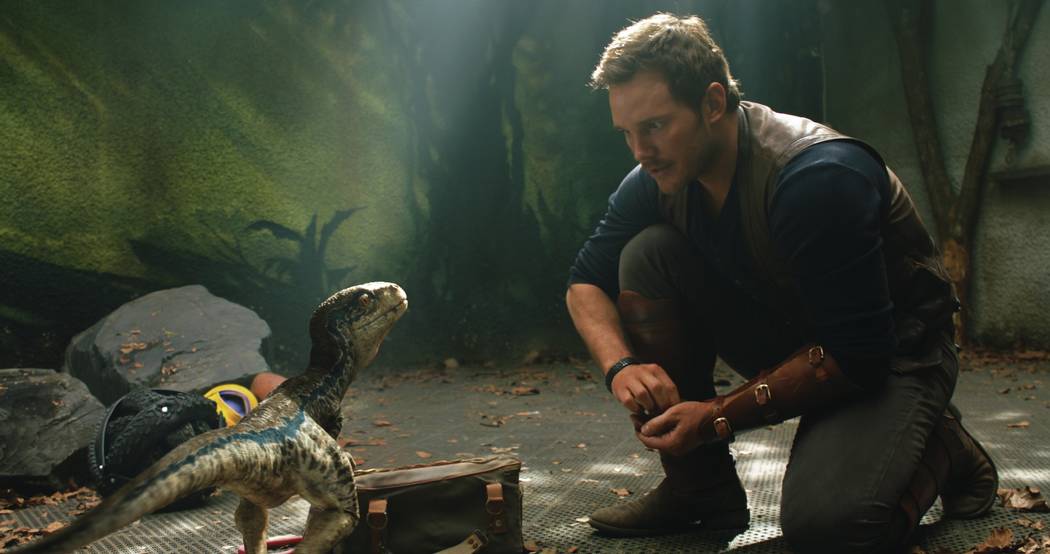 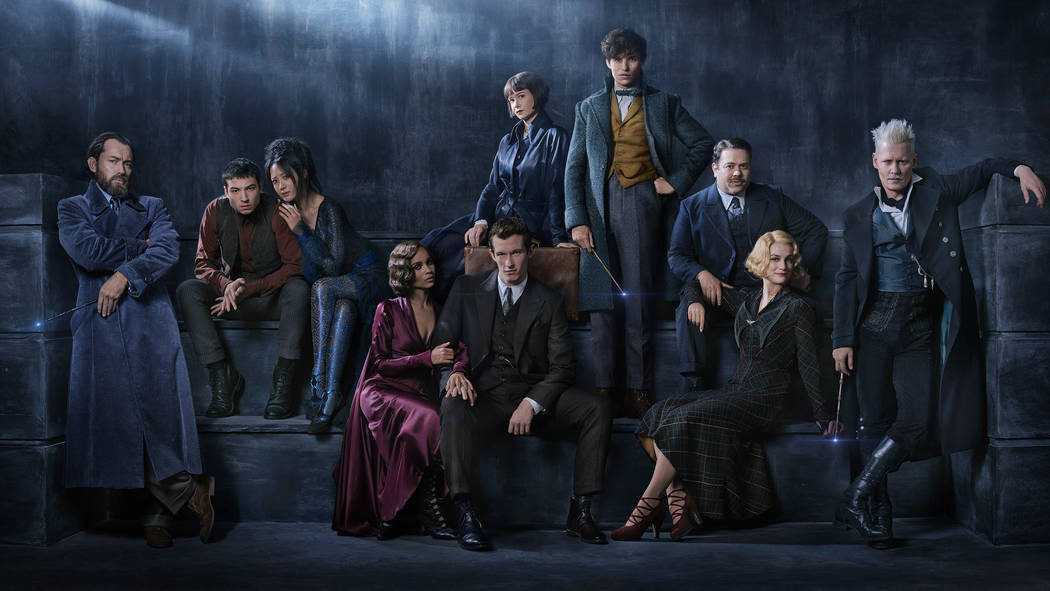 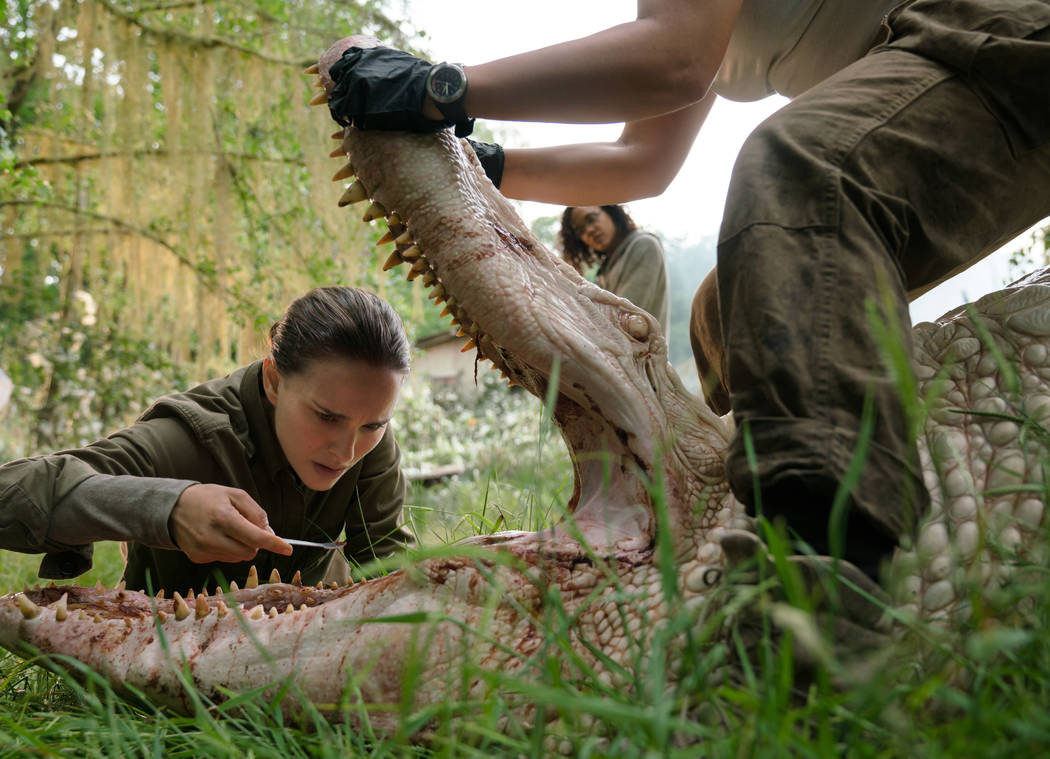 Natalie Portman and Tessa Thompson in "Annihilation," from Paramount Pictures and Skydance. 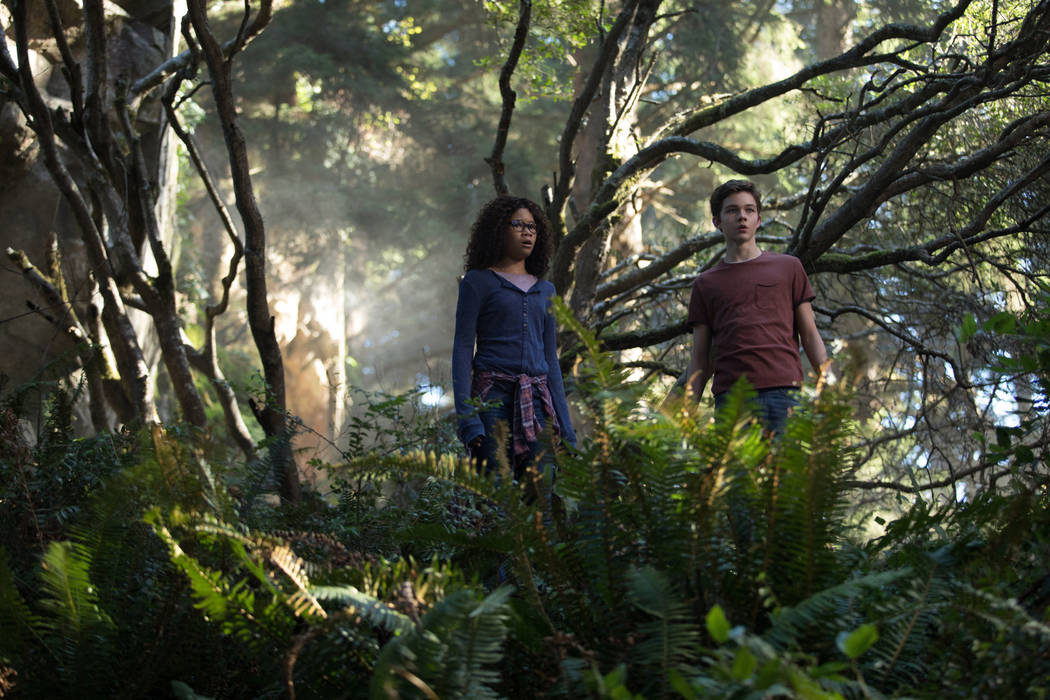 Storm Reid is Meg Murry and Levi Miller is Calvin O'Keefe in Disney's A WRINKLE IN TIME, an epic adventure based on Madeleine L'Engle's timless classic directed by Ava DuVernay. 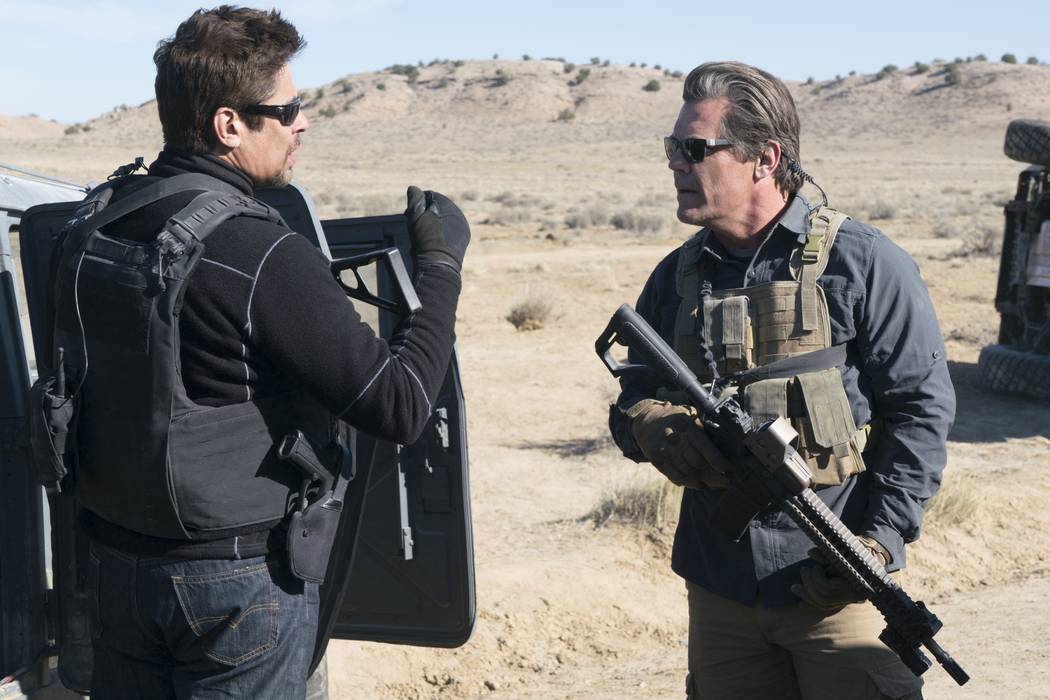 Of the 10 highest-grossing films of 2017, six were superhero movies, one was another “Star Wars” and one was a live-action remake of a Disney animated tale.

So what’s in store for 2018? More superhero movies and another “Star Wars.” (A live-action remake of Disney’s “Mulan” was set for November before it was delayed until 2019.)

“Avengers: Infinity War” is one of the most anticipated events of the year. Then again, so is “Deadpool 2.” And “Black Panther.” And “The Incredibles 2.” So, to ensure a little variety, here’s a look at 18 non-superhero movies to look forward to in 2018:

Spencer Stone, Anthony Sadler and Alek Skarlatos — the three Americans who, on Aug. 21, 2015, thwarted a terror attack aboard a Paris-bound train — portray themselves in this drama directed by Clint Eastwood.

When her soldier husband (Oscar Isaac) is the sole survivor of a mission to an environmental disaster zone, a biologist (Natalie Portman) searches for answers in the latest from writer-director Alex Garland (“Ex Machina”).

After suffering a career-ending injury, a prima ballerina (Jennifer Lawrence) is recruited to join a secret intelligence service, which turns her body and mind into dangerous weapons, in this thriller.

When her physicist father (Chris Pine) goes missing, Meg Murry (Storm Reid), her brother and a classmate seek help from three celestial beings (Oprah Winfrey, Reese Witherspoon, Mindy Kaling) to rescue him in this update of Madeleine L’Engle’s classic story directed by Ava DuVernay (“Selma”). Admit it, you always had a feeling Oprah was a celestial being.

In what may be the Wes Anderson-iest movie yet, the writer-director turns to members of his recurring troupe — including Edward Norton, Jeff Goldblum, Tilda Swinton, Harvey Keitel and, of course, Bill Murray — as well as Scarlett Johansson, Frances McDormand, Bryan Cranston and Yoko Ono, to voice this animated comedy about the 12-year-old ward of the corrupt mayor of Megasaki City who travels to Trash Island to rescue his exiled canine bodyguard.

In 2045, the first person to find an Easter egg hidden by the inventor (Mark Rylance) of an expansive virtual reality universe will inherit his vast fortune in Steven Spielberg’s adaptation of the best-selling novel.

John Krasinski directs and stars alongside his wife, Emily Blunt, in this horror movie about a rural family forced to live in complete silence to avoid being hunted by an evil presence that’s attracted to sound.

Long before he was part of the Rebellion, Han Solo (Alden Ehrenreich) was just a roguish smuggler, completing the Kessel Run in less than 12 parsecs, and palling around with Lando Calrissian (Donald Glover) and a certain Wookiee. That’s long been established, though, so why do we need this spinoff/prequel? Because, money.

When a volcano threatens the surviving dinosaurs in the ruins of Jurassic World, Owen (Chris Pratt) and Claire (Bryce Dallas Howard) set out to rescue them. They correct the biggest blunder from the 2015 reboot by bringing back rock-star mathematician Dr. Ian Malcolm (Jeff Goldblum). Maybe this time Claire will even wear some sensible shoes.

Josh Brolin, Benicio Del Toro and, most importantly, screenwriter Taylor Sheridan (“Wind River,” “Hell or High Water”) return for another murky look at the war on drugs along the U.S.-Mexico border.

Shane Black portrayed nerdy mercenary Hawkins in “Predator,” which was released in 1987, the same year as his first big-screen writing credit, “Lethal Weapon.” So if you’re going to bring back the jungle-dwelling alien, who better than Black (“Iron Man 3,” “The Nice Guys”) to write and direct the mayhem involving “This Is Us” Emmy winner Sterling K. Brown, Keegan-Michael Key, Edward James Olmos, Olivia Munn and “Room’s” Jacob Tremblay?

In recent years, we’ve seen Sherlock Holmes as a brawler (“Sherlock Holmes”) and as an elderly retiree battling dementia (“Mr. Holmes”). We’ve seen him in modern London (“Sherlock”) and modern New York (“Elementary”). In March, some of us with small children or too much time on our hands will even see him as an animated garden gnome voiced by Johnny Depp (“Sherlock Gnomes”). What we haven’t seen, until now, is the great detective portrayed by Will Ferrell, with his “Step Brothers” co-star John C. Reilly as Dr. Watson.

It’s a good thing Emily Blunt was saving her voice during “A Quiet Place.” She no doubt needed every bit of it to belt out new songs by Lin-Manuel Miranda, who co-stars with her in this sequel set 25 years after one of the most beloved movie musicals of all time.

Scaramouche, Scaramouche, you can buy tickets on Fandango — or simply go to the box office — to see this Queen biopic, starring “Mr. Robot’s” Rami Malek as Freddie Mercury.

And now for something super

These are the 11 superhero movies slated for release in 2018: