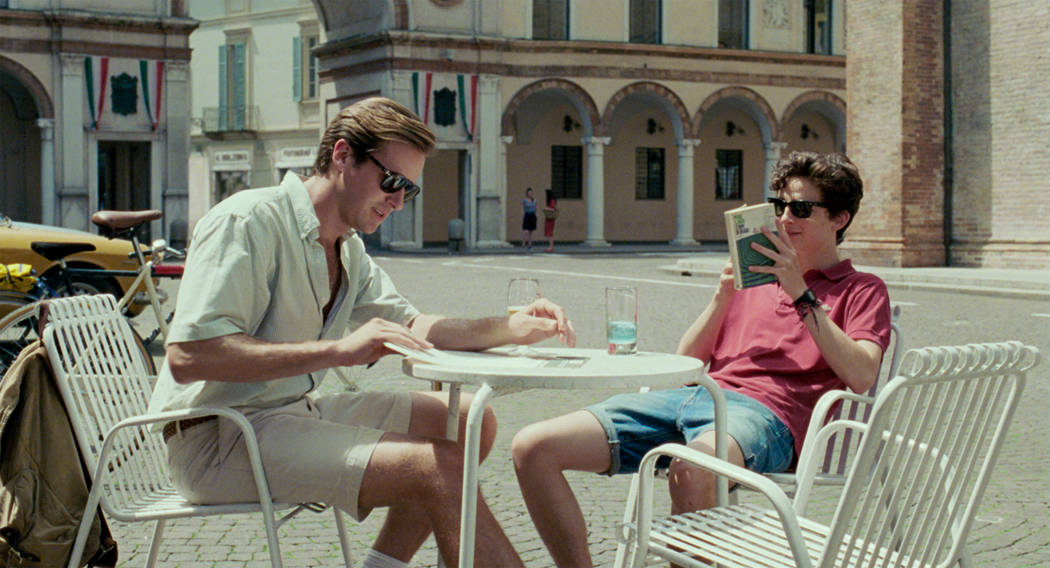 Armie Hammer and Timothee Chalamet in "Call Me by Your Name." (Sony Pictures Classics)

On Tuesday, it will have been a year since “Call Me by Your Name” debuted at Sundance to rapturous reviews.

That year might as well have been a generation, though, because it’s become almost impossible to view the coming-of-age romance between a 24-year-old graduate student (Armie Hammer) and his professor’s 17-year-old son (Timothee Chalamet) without being bathed in the uncomfortable stench of a million Twitter accusations.

Elio must give up his bedroom to the newcomer, and they’ll still have to share a connecting bathroom. Worst of all, Elio finds him arrogant. “All right, buddy. Thanks for the help,” Oliver says, dismissively, after Elio shows him the way into town from their rural home.

A bored Elio slowly becomes more curious about the family’s new houseguest, though, as the days drag on. “So what does one do around here?” Oliver asks. “Wait for the summer to end,” Elio replies.

Needless to say, “Call Me by Your Name’s” languid, halting look at the pain and awkwardness of first love isn’t exactly a thrill a minute. It’s closer to eavesdropping than watching a more traditional film.

Once Elio and Oliver grow closer, they spend their days lazily swimming and sunning themselves, biking aimlessly through the countryside and plucking peaches from nearby trees. It’s beautiful, but you might want to grab a Red Bull on your way into the theater.

I long to be as free as Hammer is in the scene in which Oliver dances, wildly and gracelessly, to The Psychedelic Furs’ “Love My Way.”

Stuhlbarg, meanwhile, is on one of Hollywood’s greatest awards-season hot streaks. His tender, sympathetic Mr. Perlman comes on the heels of his turns as Dr. Robert Hoffstetler in “The Shape of Water” and New York Times Managing Editor Abe Rosenthal in “The Post.” He’s at his best here as the quiet professor who just may be the ideal father for any teenager exploring his sexuality.

Bringing Andre Aciman’s novel, a landmark of gay fiction, to the screen has been a labor of love that began in 2008. It’s just a shame that the finished product, written by James Ivory of Merchant Ivory fame and directed by Luca Guadagnino (“A Bigger Splash”), couldn’t have hit theaters sooner.

There’s nothing predatory in Oliver’s behavior. It probably wouldn’t have been illegal.

Yet, much like “All the Money in the World,” you can count “Call Me by Your Name” as another movie Kevin Spacey very nearly ruined, and this time he was never even in it.