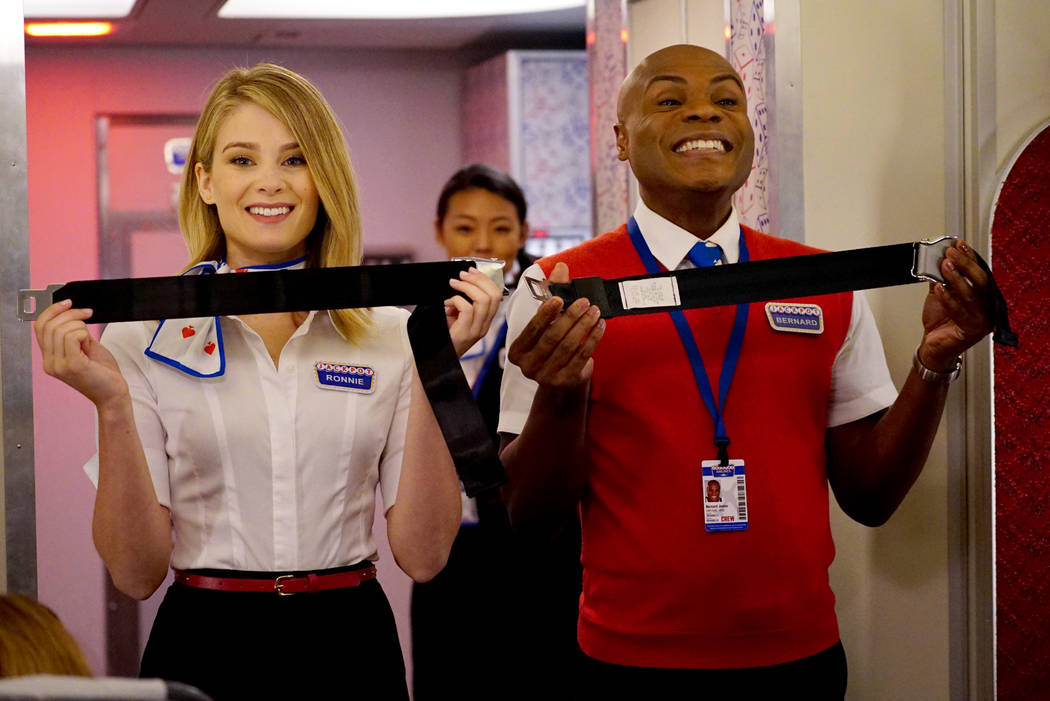 Kim Matula and Nathan Lee Graham are seen in the pilot episode of "LA to Vegas." (Fox) 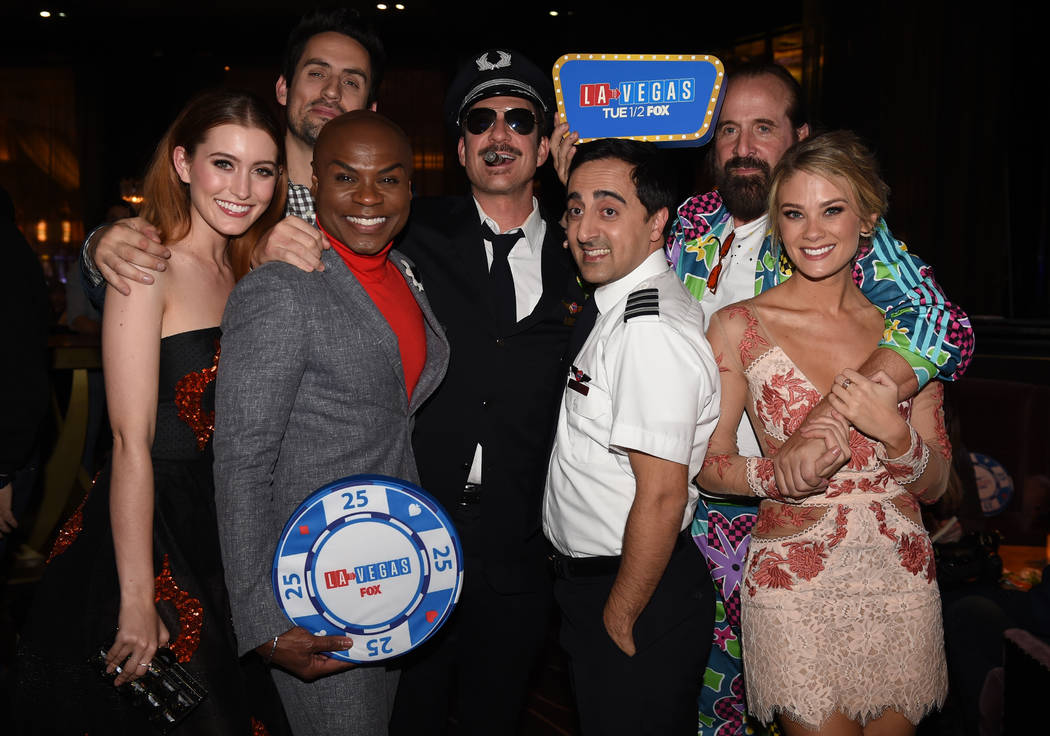 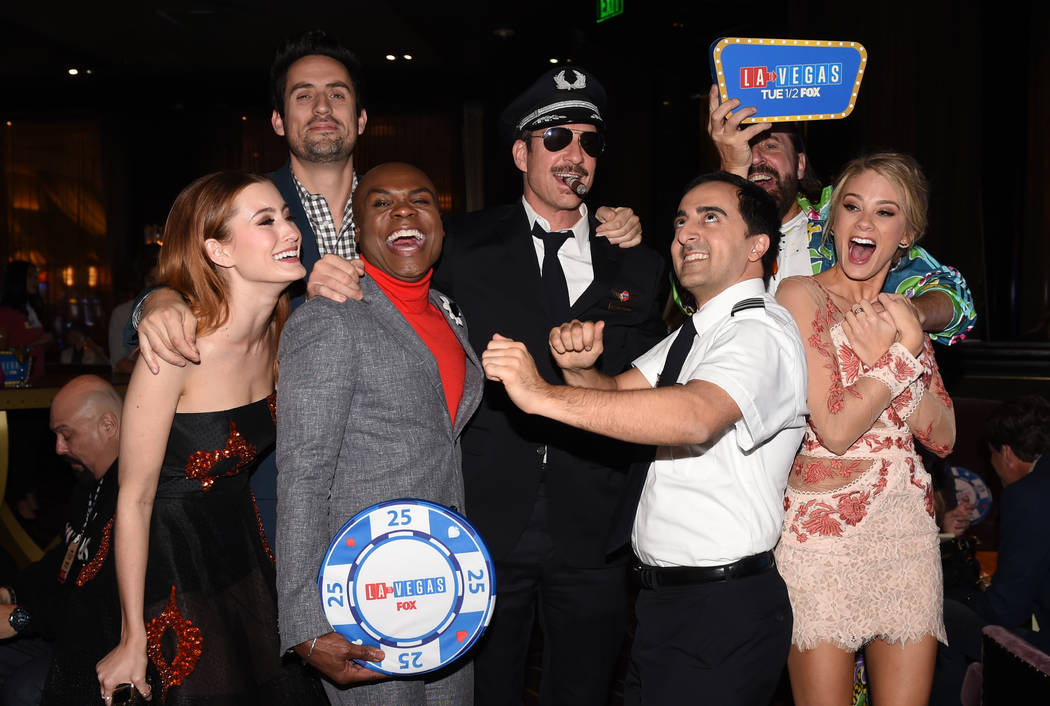 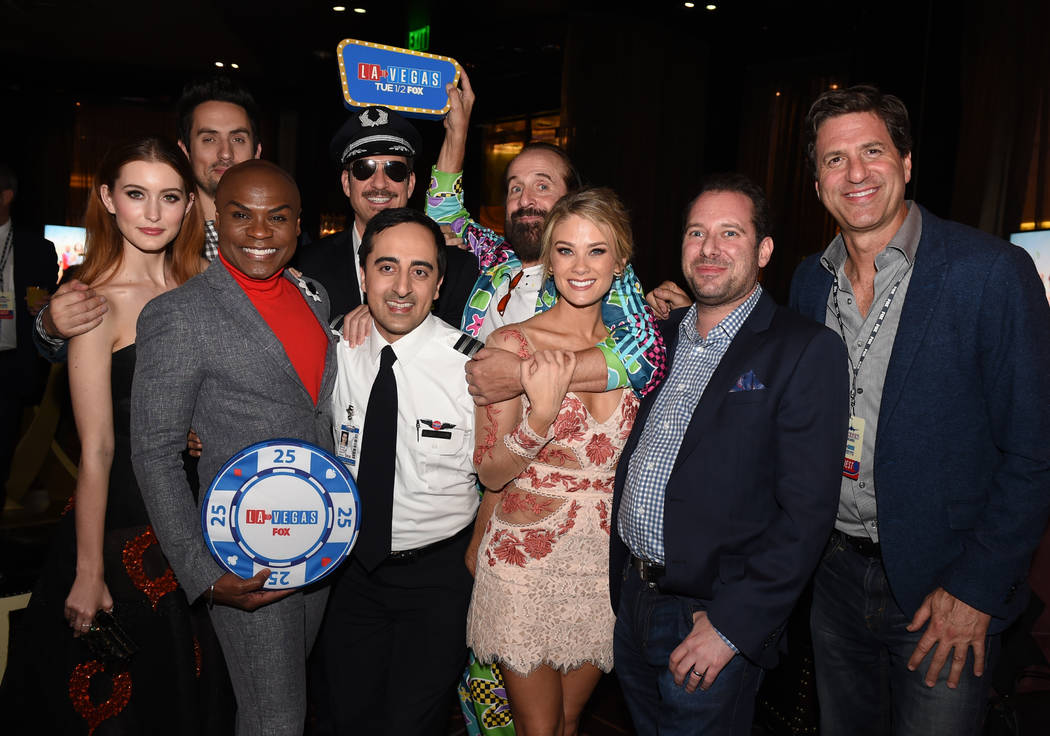 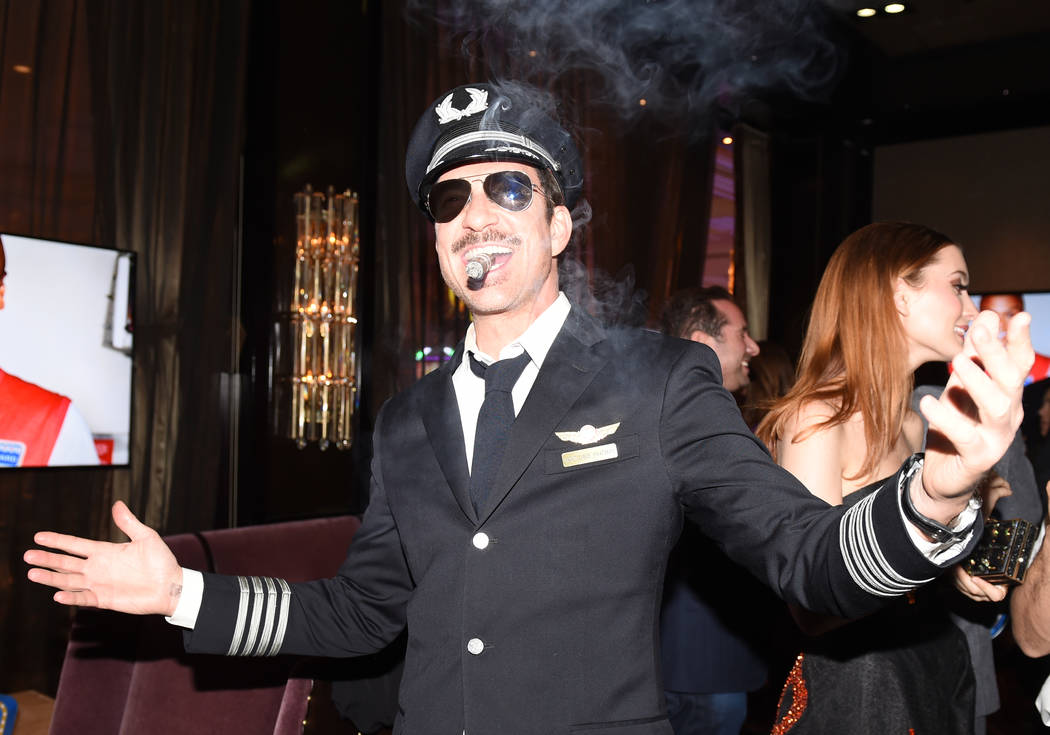 LA TO VEGAS: Dylan McDermott at the LA TO VEGAS Premiere Party at the Bellagio Resort & Casino on December 7, 2017 in Las Vegas, Nevada. (Photo by Frank Micelotta/Fox/PictureGroup) 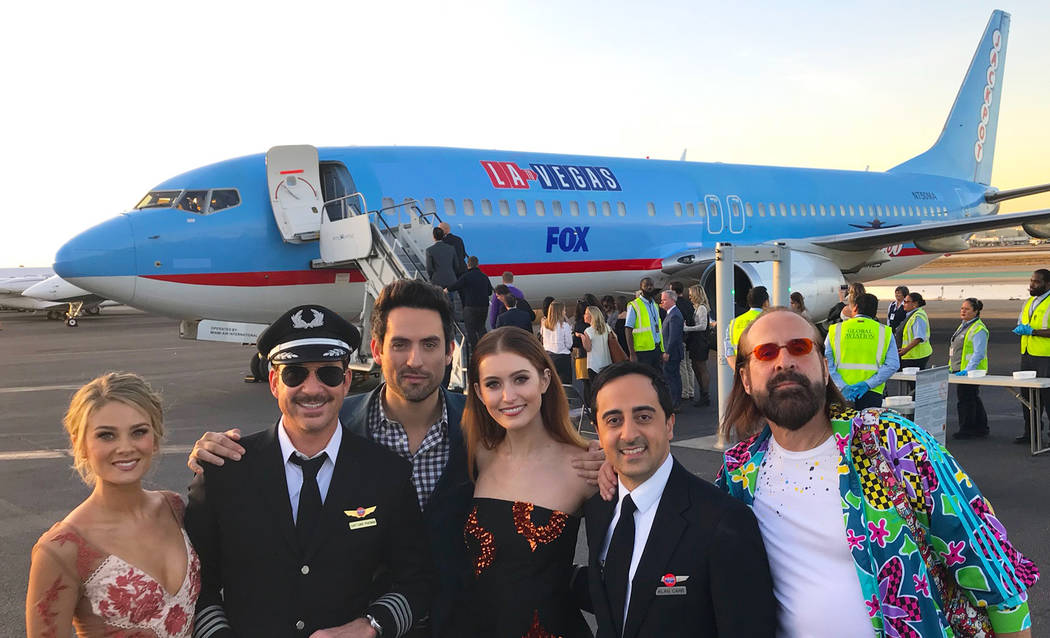 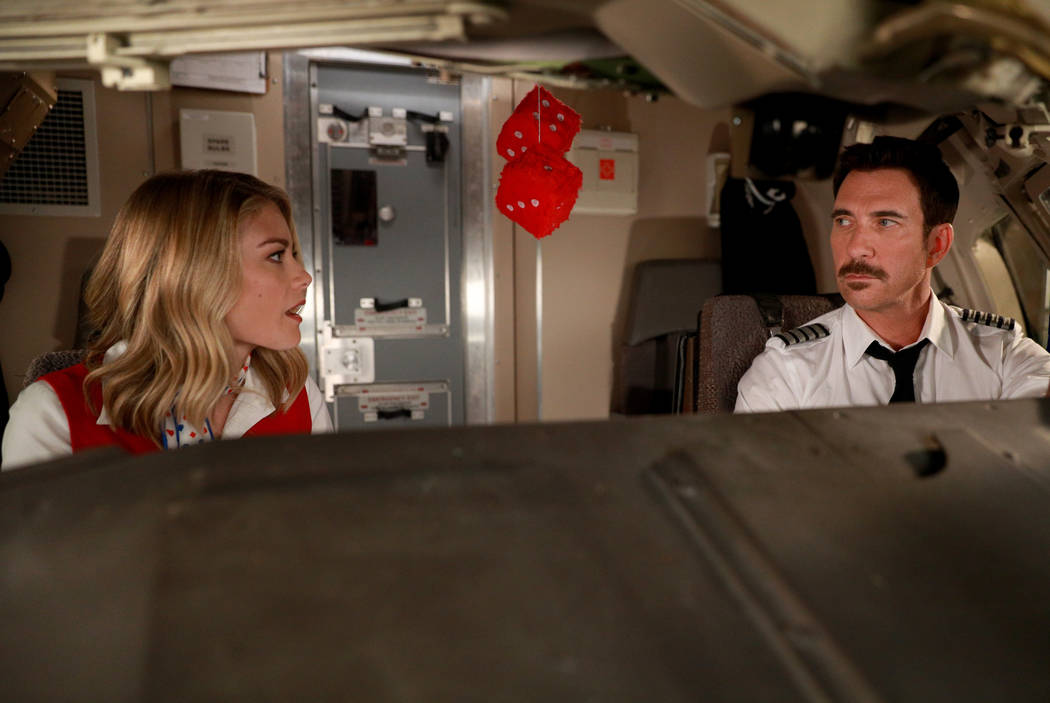 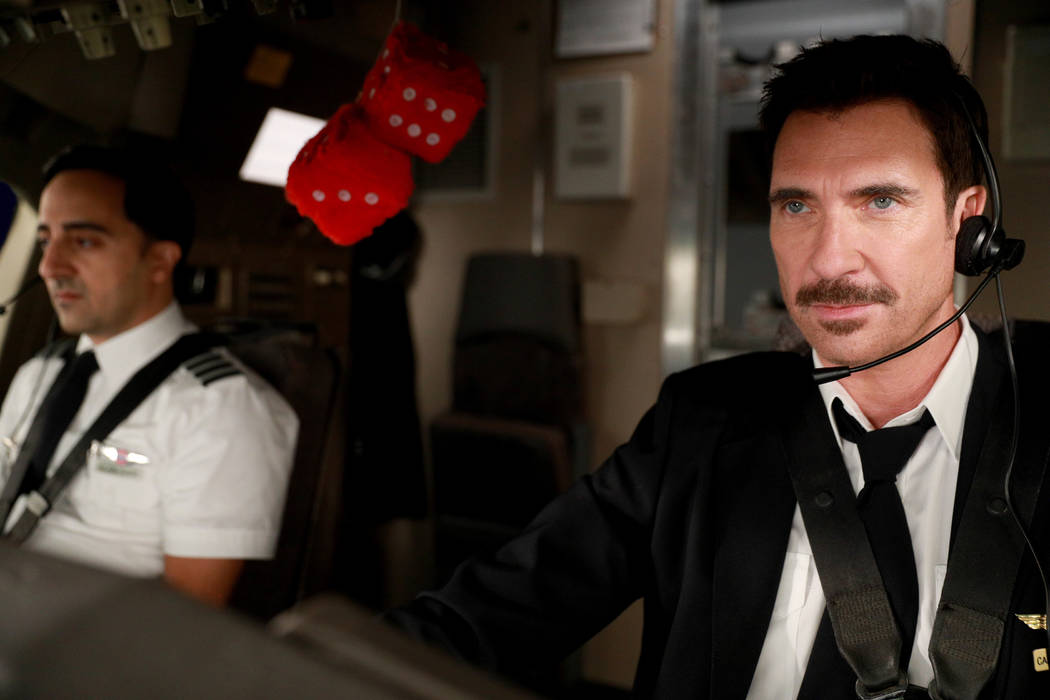 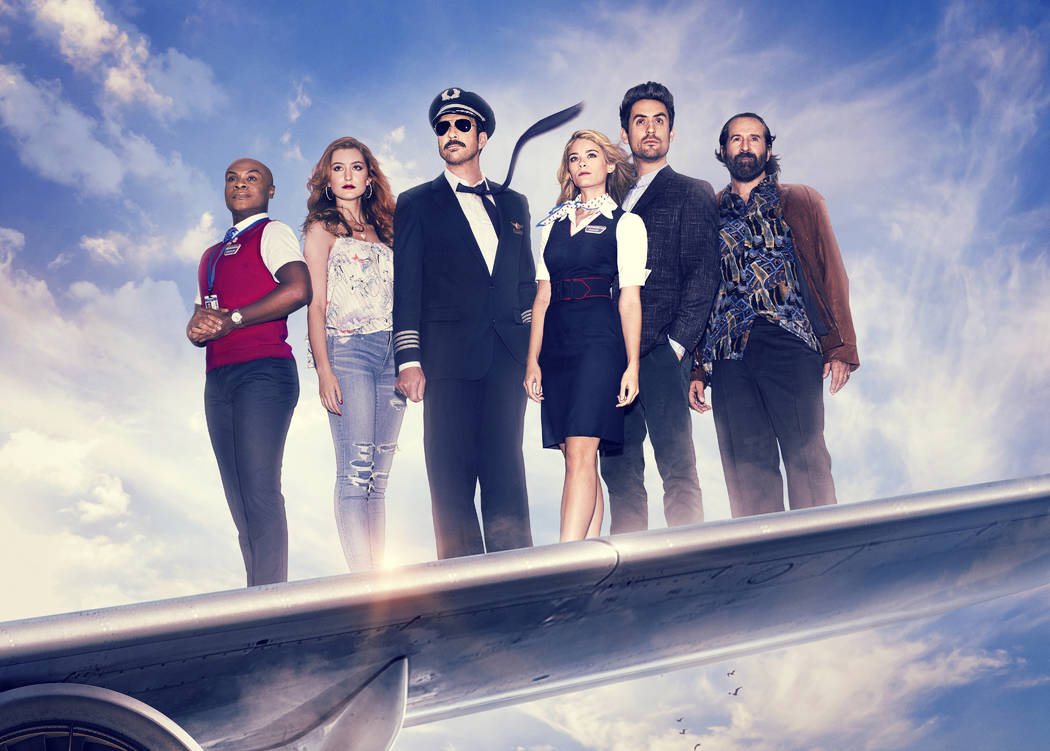 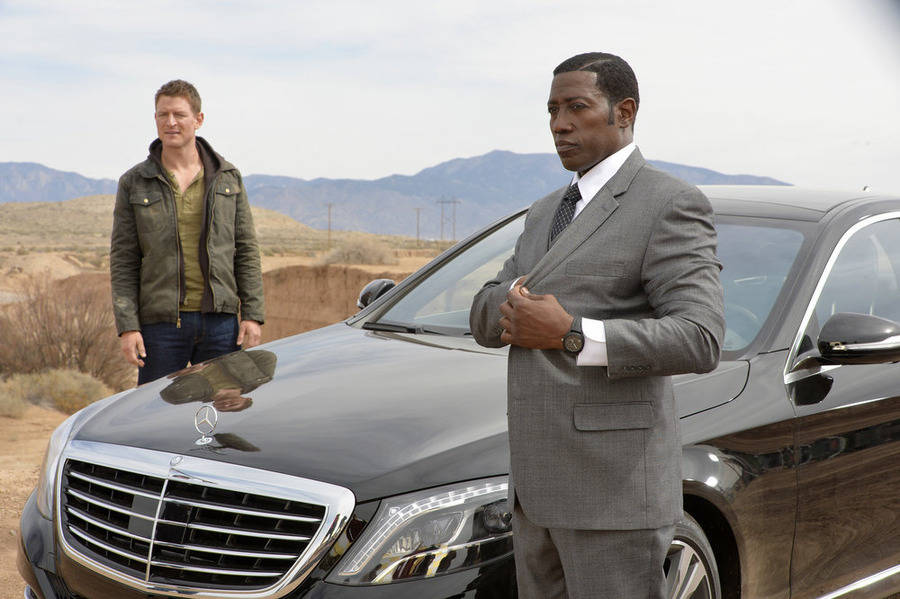 You could say the new comedy “LA to Vegas,” debuting at 9 p.m. Tuesday on Fox, was in the cards.

You could, if you enjoy making people groan.

Writer Lon Zimmet drew upon his monthly flights to play poker on the Strip when creating the series, which follows the Las Vegas-bound crew and passengers on the low-rent Jackpot Airlines, where fuzzy dice hang in the cockpit, Captain Dave (Dylan McDermott) plugs steakhouses and brothels from the flight deck and, during times of stress, flyers can seek comfort from a therapy duck.

As flight attendant Ronnie (Kim Matula) complains, “I need to be on a real airline, where people aren’t just looking to cheat on their wives and butt-smuggle molly.”

Shortly after Chris Moneymaker won the Main Event at the 2003 World Series of Poker in what was his first live tournament, online and home players flocked to the Strip to try their luck. Zimmet, who was struggling to find writing work in Hollywood, wasn’t far behind.

“I started making this trip a lot, realizing a lot of people were getting introduced to poker after I’d been playing for years, and could make money off it when I couldn’t get a job anywhere else,” he said at the show’s launch party last month at the Bellagio. “So I used to come out one weekend a month, and it would pay my rent for the month, and it would pay for food for the month.”

Three regulars take Jackpot Airlines Flight 1610 from L.A. to Vegas on Fridays, returning on Sunday’s Flight 1322: Colin (Ed Weeks), a UCLA economics professor; Artem (Peter Stormare), who’ll gamble on anything; and Nichole (Olivia Machlin), who commutes to the Strip on weekends at Grapefroots, where customers get a free fruit salad with every lap dance.

Will Ferrell and Oscar-winning writer Adam McKay (“The Big Short”) came onboard as executive producers, as did “Modern Family” co-creator Steve Levitan, whose first job in television was writing for NBC’s airline comedy, “Wings.”

“Complete coincidence. I wasn’t, like, on the hunt for an airline show,” Levitan joked at the Bellagio event, shortly after flying in from Los Angeles with the cast, producers and a gaggle of L.A.-based reporters on an “LA to Vegas”-branded jet. McDermott and Amir Talai, who portrays his co-pilot, Alan, even showed up in uniform.

Levitan had been looking for a series to mark his first directing gig outside “Modern Family” since its debut in 2009. “This is,” he said, “by far the funniest thing I read.”

“Las Vegas is the most enchanting place there is,” sassy flight attendant Bernard (Nathan Lee Graham) gushes in the premiere. “A place where tigers are liberated from their dirty jungles and acrobats can make a living.”

“LA to Vegas” doesn’t make fun of Las Vegas. It has fun with Las Vegas.

“I made sure to pack a (writing) staff full of people who are very familiar with Las Vegas, so everyone has their own stories,” Zimmet said in a follow-up phone conversation. “One of my writers actually used to take trips where he’d get a load of money from someone just to fly out to Vegas to place sports bets for them. So he used to fly out with literally hundreds of thousands of dollars in, like, a suitcase.”

McDermott, who still may be best-known for his seven seasons on “The Practice,” is relishing playing the berserk, muay thai-obsessed, nine-toed Captain Dave: “It’s the best job ever. … They pay me. They feed me. And I laugh all day.”

For anyone struggling with the concept of a comedy set on an airplane, co-star Matula has an easy fix: “It’s ‘Love Boat’ in the sky, but dirtier.”

If that’s not already plastered on billboards in cities across the nation, someone isn’t doing his job.

The first episode of “LA to Vegas” was filmed last spring, and it was picked up as a series in May. Then the events of Oct. 1 cast a pall over the episode’s best inside-Vegas joke: “OK, so it looks like the chapel is next to a gun range,” a groom exiting the plane tells his bride-to-be. “Wait, the chapel is a gun range.”

Josh Bycel, who grew up visiting his grandparents at their home near Boulder Station, said he and some of his fellow executive producers talked about scrapping the joke before ultimately leaving it in.

“We feel like it’s far enough away (in time),” he said. “And it just feels so Vegas. But it was discussed. We want to make sure that we’re as respectful as possible.”

Those involved with the series said that while they’re sensitive to and always aware of the Route 91 Harvest festival shooting, the city bounced back so quickly that it didn’t alter their plans for the comedy.

In future episodes, “LA to Vegas” gets out of the plane, and even out of the airport. And, in doing so, it explores the city’s sillier side.

“I kind of want to show its eccentricities and what makes it probably the most unique city in America, and have some fun with it in all its little nuances,” Zimmet said.

If anything, the series is a celebration of everything that lures more than 40 million visitors here each year.

“Vegas is strong, and Vegas is here to stay, no matter what kind of tragedy happens,” co-star Graham said. “So we keep lifting Vegas up for what it actually was, is and always will be: a place to have a magical time.”

Given his family ties, Bycel takes personal responsibility for how the show portrays the city.

“Vegas is a very special place, a very cool place,” he said. “I love this city. And I think our main job is when we represent it, we want to represent it well.”