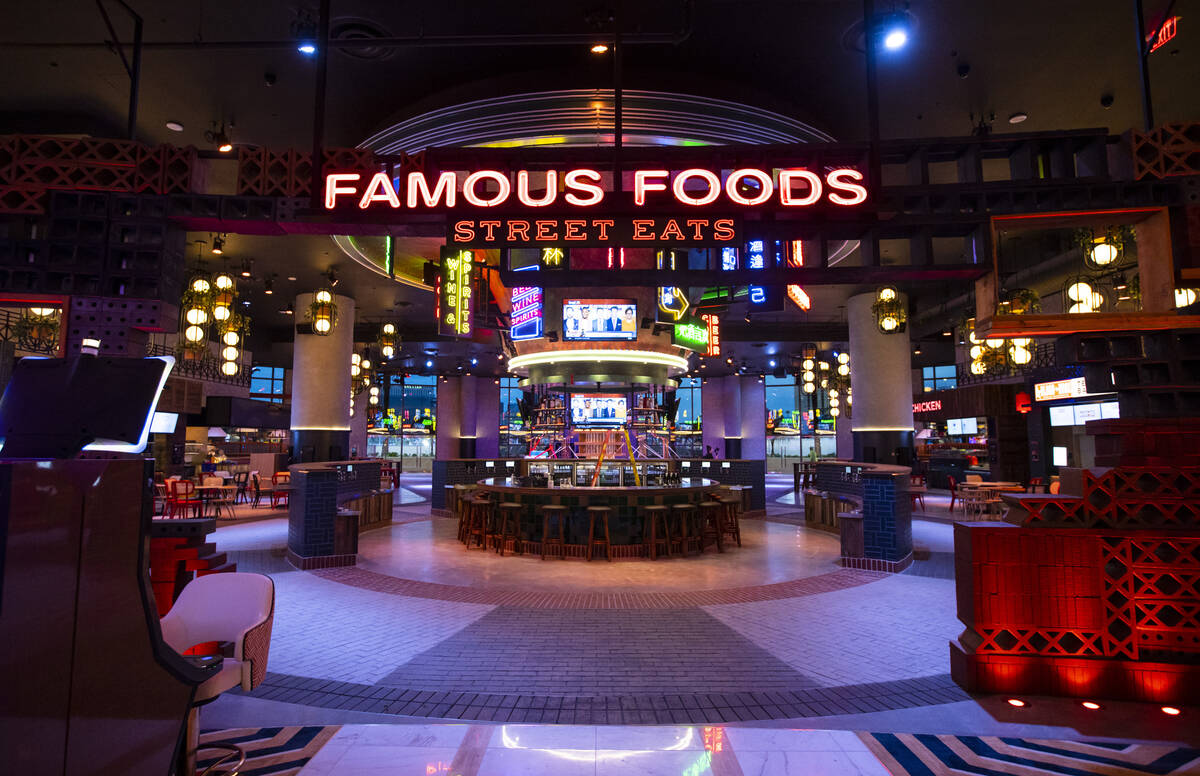 A view of one of the entrances to the Famous Foods Street Eats area during a tour of Resorts World ahead of its opening in Las Vegas on Wednesday, June 23, 2021. (Chase Stevens/Las Vegas Review-Journal) @csstevensphoto 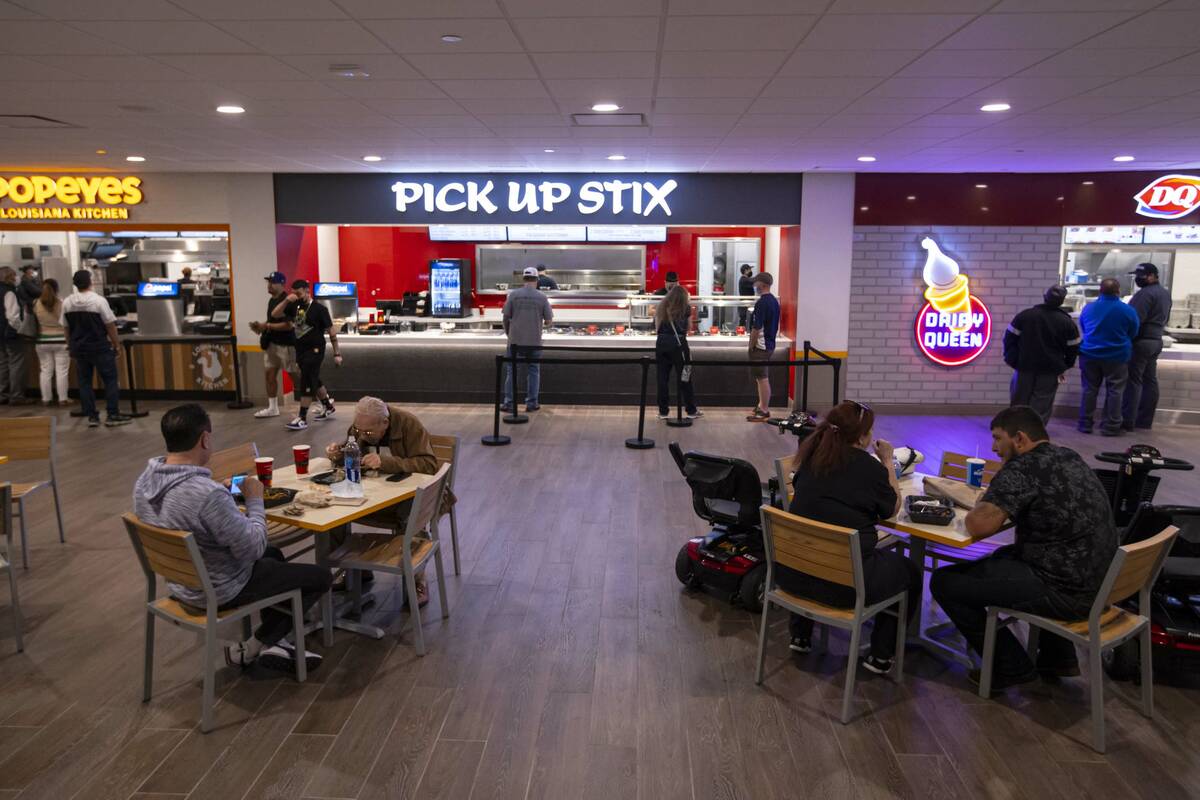 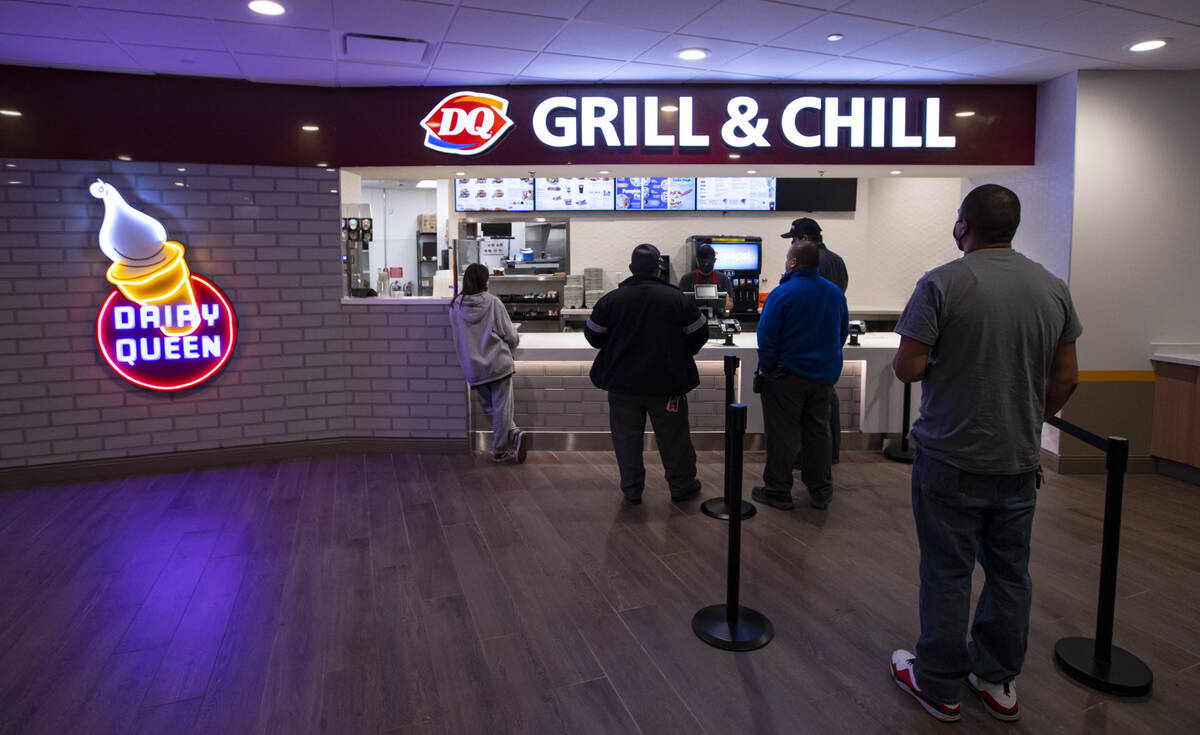 People line up to place an order at Dairy Queen inside the new food court at Circus Circus in Las Vegas on Tuesday, Oct. 26, 2021. (Chase Stevens/Las Vegas Review-Journal) @csstevensphoto 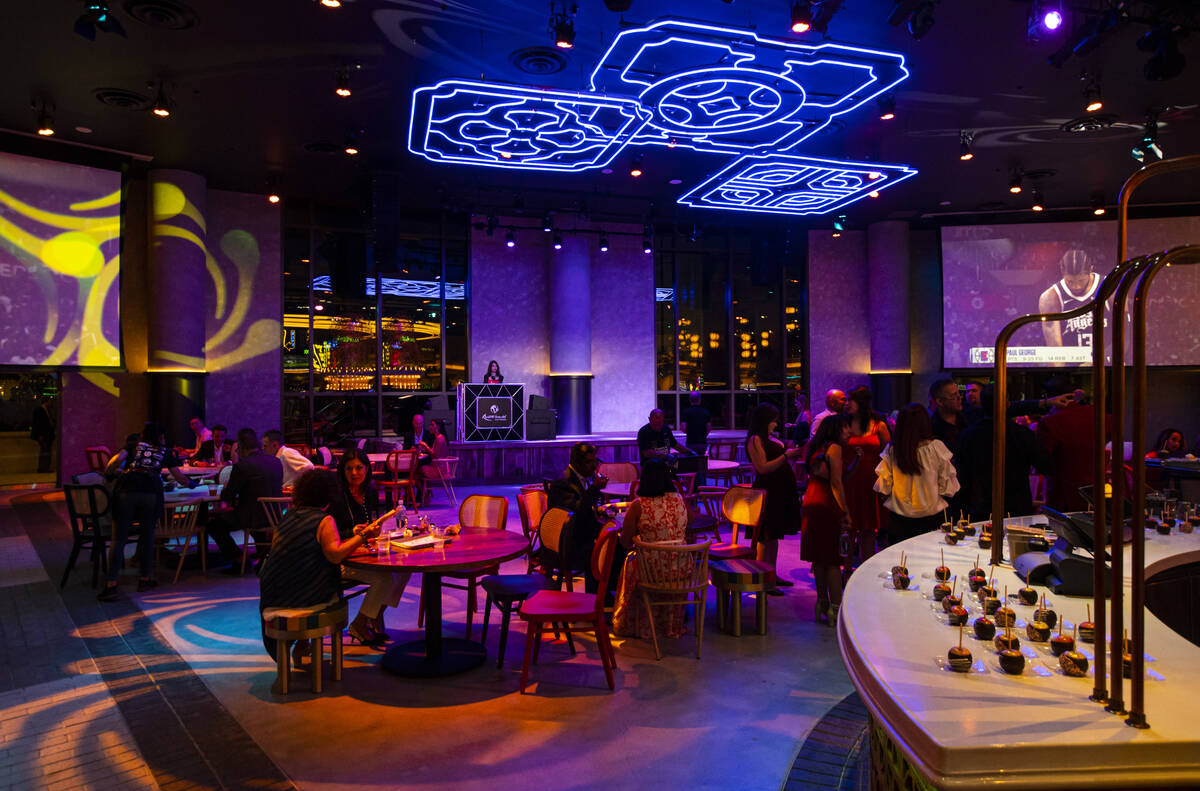 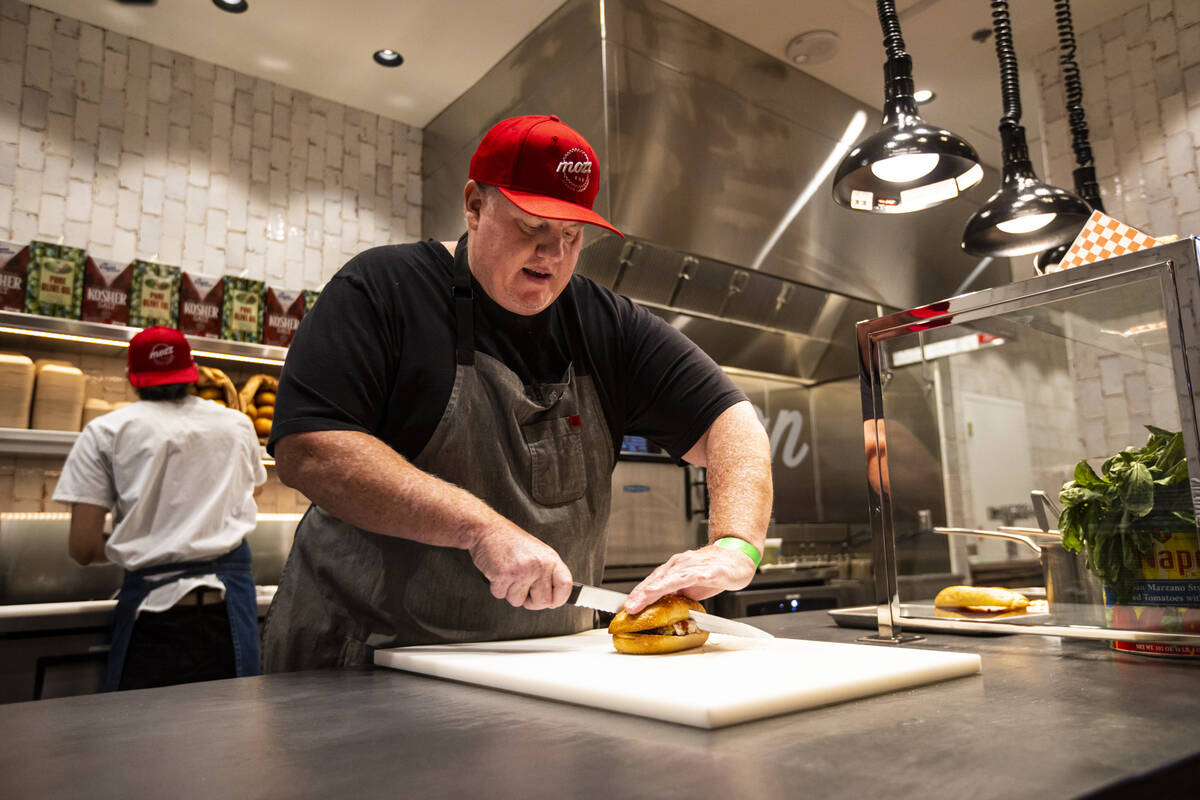 Chef James Trees prepares a chicken parmesan sandwich at Mozz, inside of the Famous Foods Street Eats area, during a tour of Resorts World ahead of its opening in Las Vegas on Wednesday, June 23, 2021. (Chase Stevens/Las Vegas Review-Journal) @csstevensphoto 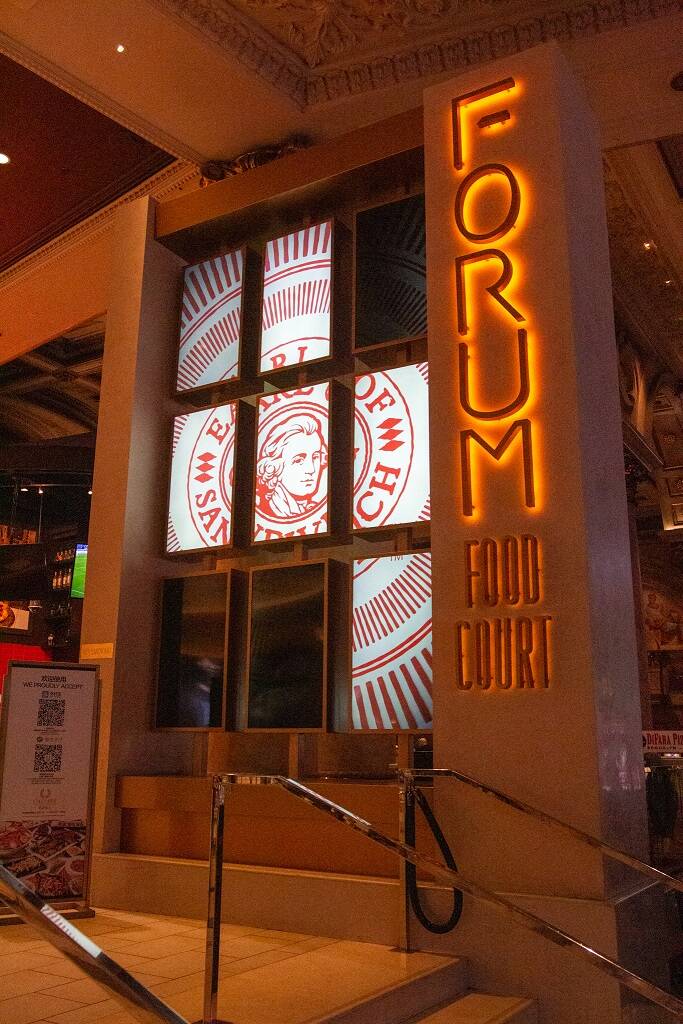 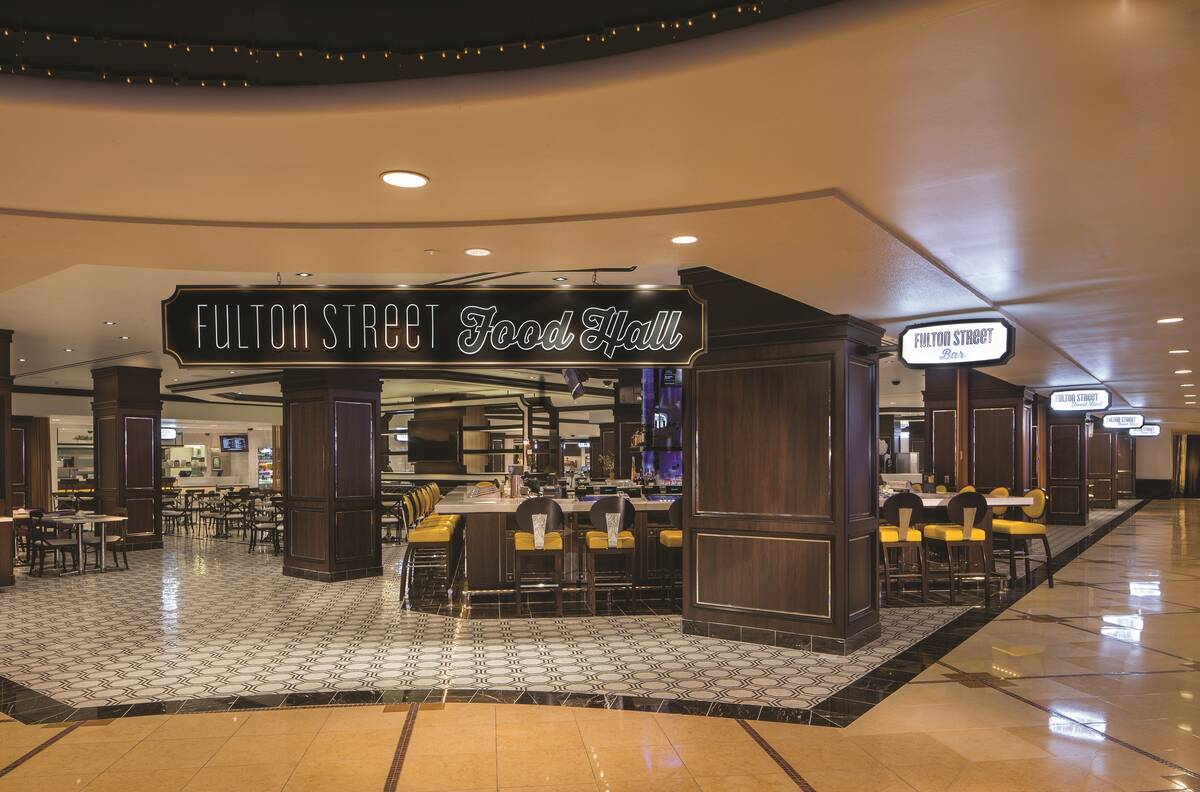 It is the era of the food court in Las Vegas, it appears, with new ones opening and older ones expanding or refreshing. Consider it the latest example of the city continually redefining itself.

For decades, anything approximating an American food court or European food hall was pretty scarce on the Strip.

“Remember that at one time, the whole idea was cheap food, cheap rooms — and you’ll pay for it at the tables,” said Michael Green, an associate professor of history at UNLV. “For that reason, it wasn’t necessarily that beneficial even to a fast-food chain to be involved, when they have their own bottom line.”

Plus, Green said, in Las Vegas’ mobbed-up days, not many large companies wanted the public to identify them with a casino. But changes brought by the corporate era, in tandem with an evolution of customer tastes, have led to a shift.

“There’s what you might call an increased commitment to a comfort level,” Green said. “If you’re coming here to do new things and have fun, it’s also OK to have some familiarity. And for many people, that applies to brands they’re used to at home.”

Familiar names pepper Feel Good Brands’ new $9 million food court at Circus Circus — the first in the property’s 53-year history, which came on the heels of the expiration of a long-term exclusive contract with McDonald’s.

“We’re believers in national brands,” Feel Good founder Lincoln Spoor said. “We believe people prefer brands, but not all brands. Everyone wants to be in (a casino), but we are very particular about who we work with.”

An increased demand for variety also is driving the rise of food courts and food halls.

That comes with new expectations, he said.

“Yes, a lot of people are going to come here for Wolfgang Puck and other big names, but it also means they expect more variety than (the era) when their choice was a coffee shop, possibly a gourmet room and a buffet,” Green said. “There are a lot of people who like a nice, sit-down dinner. There are also people who want to get their food and get back to the tables or whatever else they’re doing.”

Christine Bergman, professor of food science and nutrition at the University of Nevada, Las Vegas, pins the shift to the increase in millennial visitors.

“Millennials are really into customizing things,” she said. “A food court or food hall would make sense for them, because they like to have choices.”

Alyssa Mendes, vice president of food and beverage of Harrah’s, The Linq and the Flamingo, said that when the Fulton Street Food Hall opened at Harrah’s in 2014, it meant that seven offerings replaced one restaurant. And they’ve continued to shift.

“We’ve evolved stations, based on trends,” she said. “We used to have made-to-order salads, which transitioned because of the pandemic” to a pop-up omelet station that will in turn transition to a carving station during the holidays.

She said the Fulton Street Food Hall draws a wide variety of people.

‘The average guest who comes in for a weekend ultimately goes at least once in the morning and once for another meal,” Mendes said. “It’s very convenient.”

The offerings at Caesars Palace’s Forum Food Hall also have continually evolved since it was established about 10 years ago. Unlike at Harrah’s, whose casino-branded outlets will be joined by a big name for the first time when Bobby Flay’s Bobby’s Burgers opens in December, there are more familiar names.

“Brand recognition is a big part of what we do,” said Christopher Carraher, director of food and beverage for Caesars Palace. “We have such fabulous chefs partnered throughout our many restaurants. We carry that over to the food hall, so customers can get a Bobby Flay experience, or a DiFara Pizza.”

Other properties take a different path to what they offer, putting value on unfamiliar choices as much as variety.

“We wanted to get grassroots foods from renowned hawkers,” Mahoney said. “Marcus Samuelsson has a tri-tip sandwich that’s second to none, and that I’ve had twice in the last three days.”

Joseph Lema, chairman of the food and beverage and event management department at UNLV, said unique choices can be as important as brand recognition.

“It can be a draw,” Lema said, “that they’re seeing something new or something different they’ve never had before.”

‘The action is part of it’

Another draw: the inherent open-kitchen concept.

“I think people want food that’s cooked in front of them,” Mahoney said. “You can see the freshness and the quality. I think that’s important to people.“The action is part of it — seeing the wok going, seeing the people cut up, braise. It’s fun.”

Lema said being able to direct the action also is part of the appeal.

“They want speed, and they want control over their experience,” he said. “The service is on the customer’s terms. You can order from your phone, at the counter, get grab-and-go. With full-service dining, you’re kind of at the mercy of the server.” With food halls and food courts, “you have greater control over the time and pace of your activity.”

Another change that has been driven by technology as much as changing tastes is the increased demand for delivery. Harrah’s and Caesars enable guests to order from any of the restaurants in their food halls and have it delivered to one of the resort bars or to their room.

At Famous Foods’ electronic kiosks, as many as 4,000 guests a day order from multiple food hall outlets (except the bar) at one time.

“When you see people at those kiosks, from their eyes you can see they’re having as much fun as the people cooking,” Mahoney said. 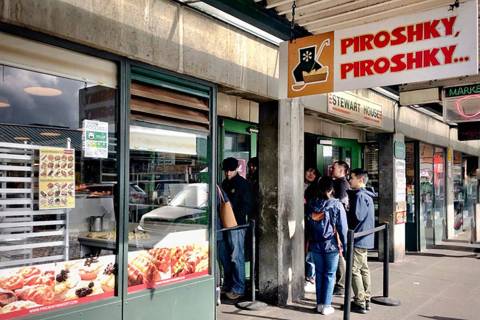 Piroshky Piroshky has offered hand-crafted Russian pastries out of Pike Place Market in Seattle, Washington, since 1992. 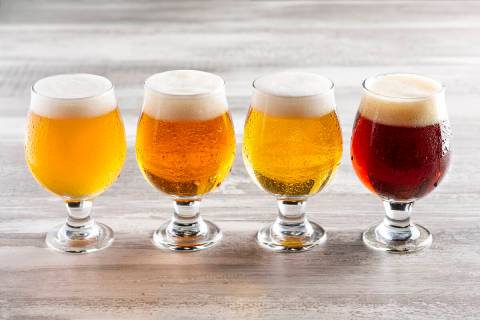 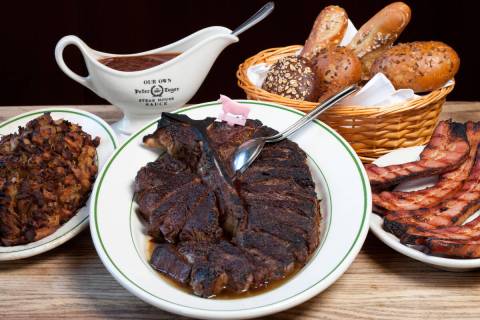 Iconic New York restaurant Peter Luger Steak House will open an outpost at Caesars Palace on the Strip, according to a news release issued today. 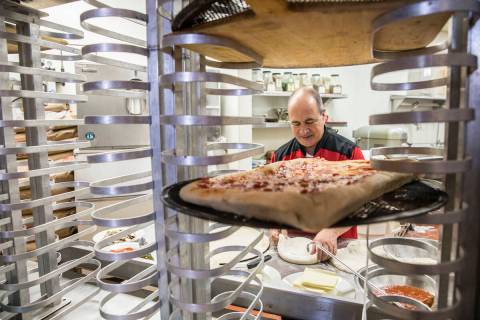 Las Vegas eateries cutting hours, closing on some days due to omicron
By Colton Lochhead / RJ

Metro Pizza is shutting its doors Mondays and Tuesdays this month as a way to deal with pressures of staffing shortages. “They just need a break,” co-founder John Arena said of his employees. 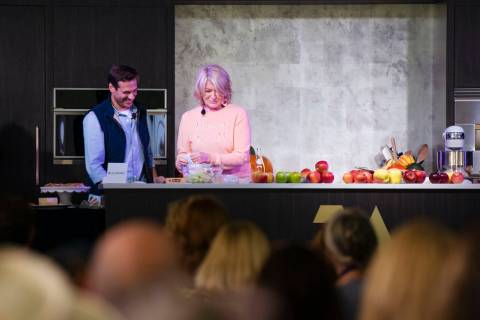 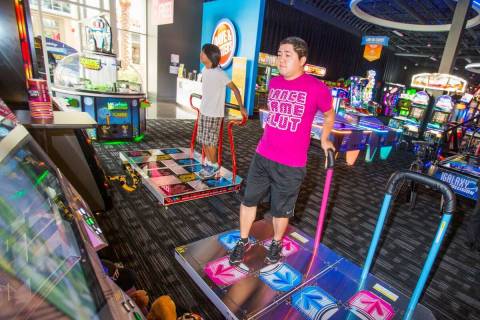 The facility will feature an arcade, a sports bar and dining areas. Its first location in Nevada debuted in 2016 in Downtown Summerlin. 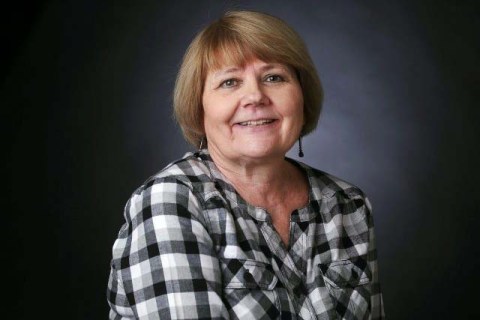 After more that two decades of keeping Review-Journal readers up to date on the food, faces and business moves of the Las Vegas dining scene, journalist Heidi Knapp Rinella is retiring. 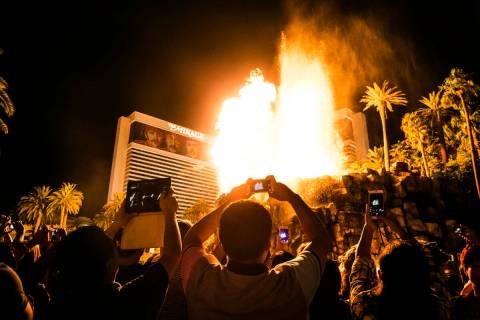 Much like this time 12 months ago, it’s easy to hope that the new year will be substantially less awful than the last. 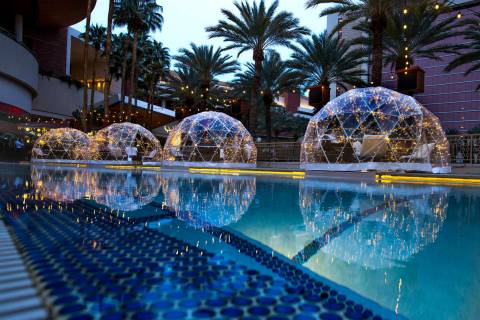 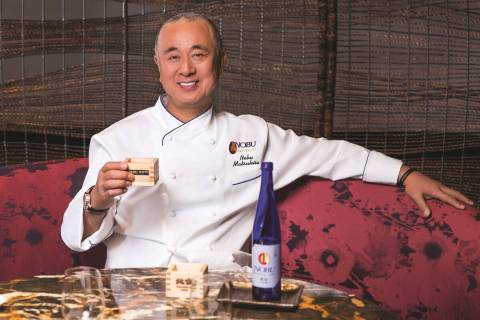