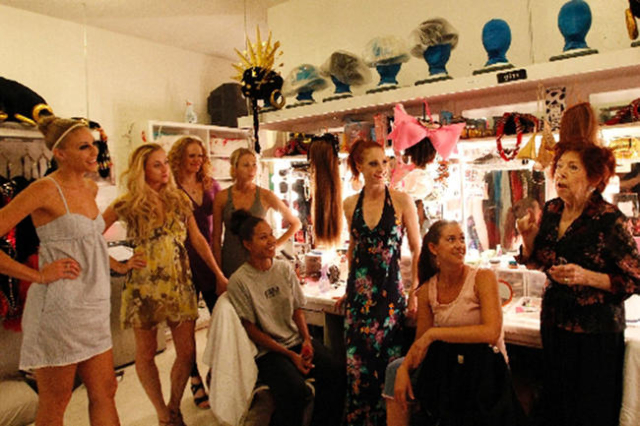 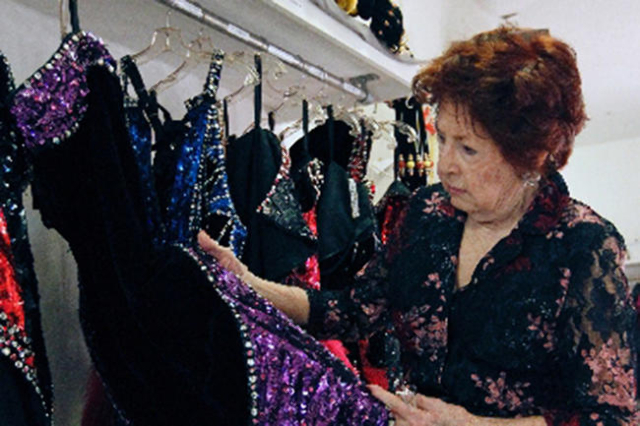 To find Ffolliott “Fluff” LeCoque’s office in Bally’s, visitors must walk down a narrow hallway, past a row of about seven vivid yellow-and-white-feathered arm cuffs hanging from a bar to the right. An equal number of matching jewel-covered headdresses rest on a white shelf, just above the cuffs.

Her office door, on the left, is open.

A box brimming with lush fake eyelashes sits atop a table in the entry, and a mirrored wall covered with photos of dancers reflects LeCoque. The company manager for “Jubilee!” is making notes on tonight’s show list, with the help of a large, bejewelled magnifying glass. LeCoque’s show, which has run for 30 years on the Strip, is the last of its kind in the city.

“I’ve had several people call in sick tonight,” LeCoque says, without looking up from her work. “One girl I’d written out of the show says she can come back into the show, and I can’t keep her from working, so she’s coming back in.”

At 87, LeCoque manages 85 dancers and singers she handpicks at auditions every six months. Her day begins with the roster — an ever-changing list of who can dance that night.

“I can rearrange the show, and it’s like playing chess,” LeCoque says. “You borrow from Peter to pay Paul.”

Once the roster is set, LeCoque presides over a preshow staff meeting.

LeCoque, who performed professionally until she was 43, took her first dance class, ballet, in Seattle. She was 7. The year was 1930. She taught dance while attending the University of Washington as a drama major, then began a professional career that took her to Hollywood, Paris and, eventually, Las Vegas.

After retiring from performance, LeCoque was recruited in 1973 to work under the Donn Arden’s direction at the original MGM Grand. She has worked in the same building ever since, originally managing “Hallelujah Hollywood.” Then, MGM ordered “Jubilee!” from Arden. The property was sold shortly after the MGM Grand fire in 1980, but LeCoque and “Jubilee!” stayed on, making her the only company manager the show has ever had.

Question: What was your first professional gig as a performer?

Answer: My first professional job where I got paid a salary was as a singer with an orchestra in Las Vegas in 1947. I really couldn’t sing more than a four-note range, but I played a mean maraca and I looked good. I was at the Last Frontier hotel and I was with the Chuck Gould Orchestra and we had an engagement there for six weeks. But actually, I was earning money as a performer since I was about 9 years old. My mother used to play the piano for me and I would perform for various functions.

Question: What did being Miss Thunderbird entail?

Answer: I was Miss Thunderbird. I wore the first bikini in Las Vegas. It was just publicity. I did nothing, just sit up on the diving board and had my picture taken. They asked me to dive in, but I wouldn’t because the bikini was terry cloth and you know what happens when a towel gets wet.

Question: What was it like for you, being a stage performer?

Answer: You know, it’s a very difficult thing for a performer to describe what it’s like to perform. It’s not so much working for the applause as being able to get away from yourself and become something else. You’re able to give of your ability to feel dance and you have to love to be able to give that expression of the music and the movement to the audience. You know when you go to see a show, you feel the electricity coming from the performer, or you feel nothing.

Question: Is it a hard life, being in show business?

Answer: I’ve been very lucky, very lucky, to have been able to bridge the gap from performer to the other side of the fence. Usually, your life is like a gypsy’s life. You never know where your next paycheck is going to come from sometimes. It’s not maybe any more difficult than other careers, but in one sense, most shows don’t last very long. You’re lucky if you get a six-week gig or a three-month gig.

Question: How did you bridge the gap?

Answer: I was a good teacher, so that helped, but also I was bossy. And very professional. Most kids didn’t like me because I was too tough. I was very strict. I can’t be as mean or strict as I used to be because of all the restrictions that are laid upon you. I can’t yell at anybody, I can’t tell anybody they’re fat. I have to be very diplomatic so as not to cross the boundaries of political correctness. It has calmed me down quite a bit. That’s a good thing. You shouldn’t have to yell at people to get your point across.

Answer: There are personality conflicts occasionally and bear in mind we have new people who come in every six months. It’s a constant fluctuation. You know, people have their problems. They get sick, they get hurt, they have family problems. It’s like managing anything else, you have to make everything work as harmonious as you can.

Question: What advice would you give to a new company manager?

Answer: Keep your cool. Listen before you say anything.

Question: In your time at “Jubilee!” what stands out to you?

Answer: I remember one birthday, I opened the door to the office here, and it was filled from ceiling to floor with balloons. With a big sign on the door, “Happy Birthday.” Ceiling to floor. I don’t know how they ever did it. All night long they were blowing up balloons and sticking them in here.

Question: What does it mean to you that “Jubilee!” is the only showgirl-style show left?

Answer: It’s sad. There will always be showgirls, but nobody wants to put up the money to build a show like this one anymore. There was a lot more work for dancers. Now, there isn’t that much work for dancers. There’s a lot of work for acrobats and acts.

Answer: I never get bored watching the show, because there’s always something that’s going on. You have to watch the show because you’re watching the show to see if people are making mistakes or not performing.

Question: You’ve said you don’t plan to retire. Why?

Question: What was it like working with Donn Arden?

Answer: It was wonderful. He was very difficult. He had a terrible temper. But, he hit the nail on the head all the time. Right, smack, on the head whether you like it or not. He loved his people.

Question: What did he teach you?

Answer: He told me that to be a good choreographer, which I wasn’t, you have to not be afraid to do something that’s different. And lots of times when I was working with him as a choreographer, all of a sudden the inspiration would just come over me to do something and he would say, “do it, do it, do it,” then he would keep it because it was exciting then. You get inspired by the music and you do something and it works. He never let anything sit too long. Things keep moving. You just get enough of a good taste of it, and then it moves. It changes. It doesn’t become static. 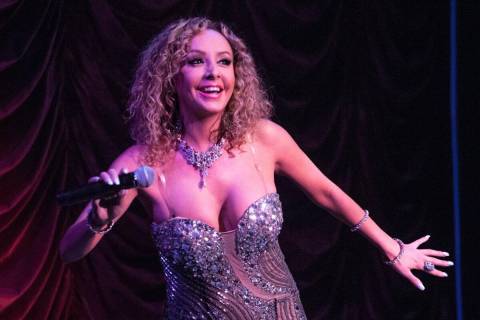 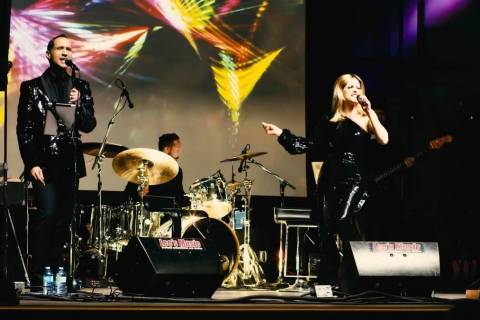 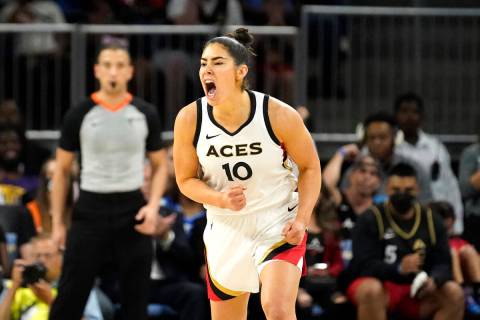 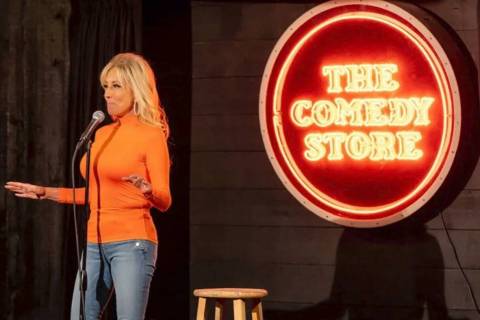 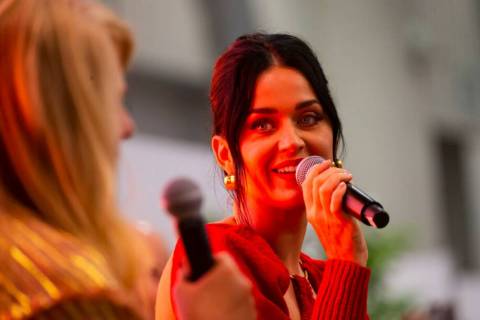 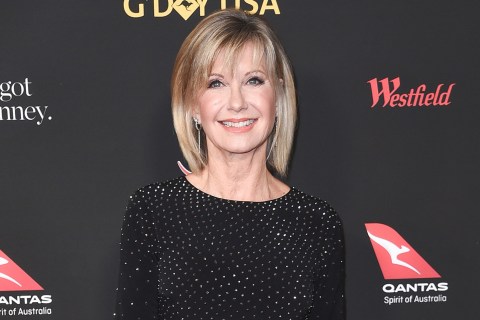 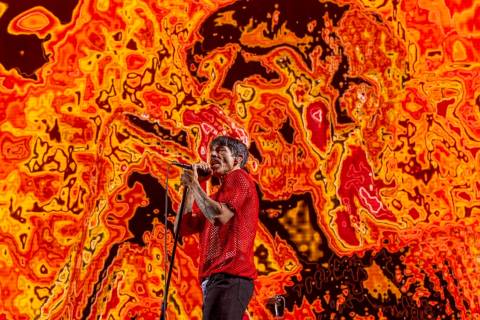 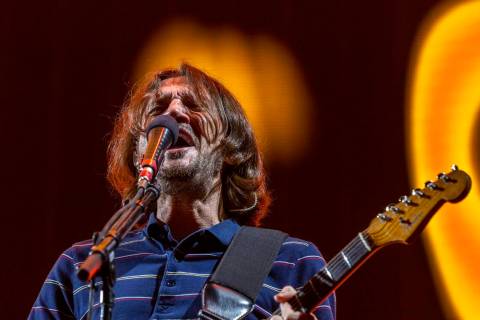 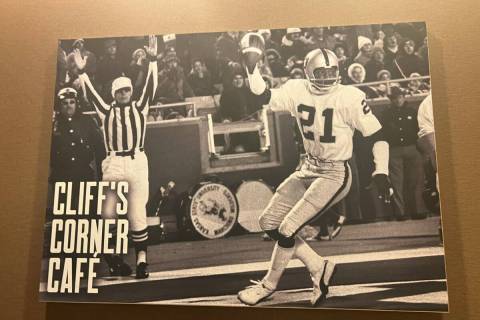 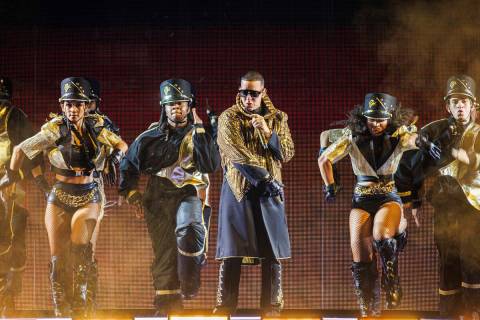 Daddy Yankee, “Bullet Train” and John Legend highlight this week’s list of things to do in Las Vegas.