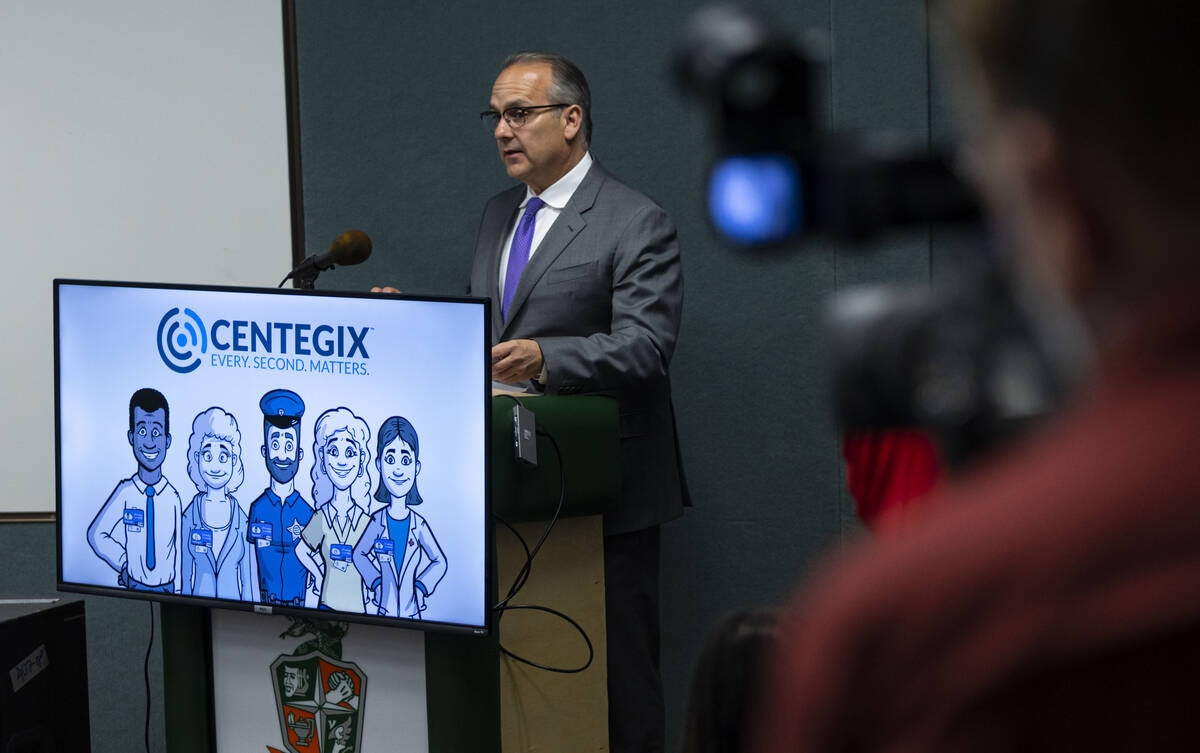 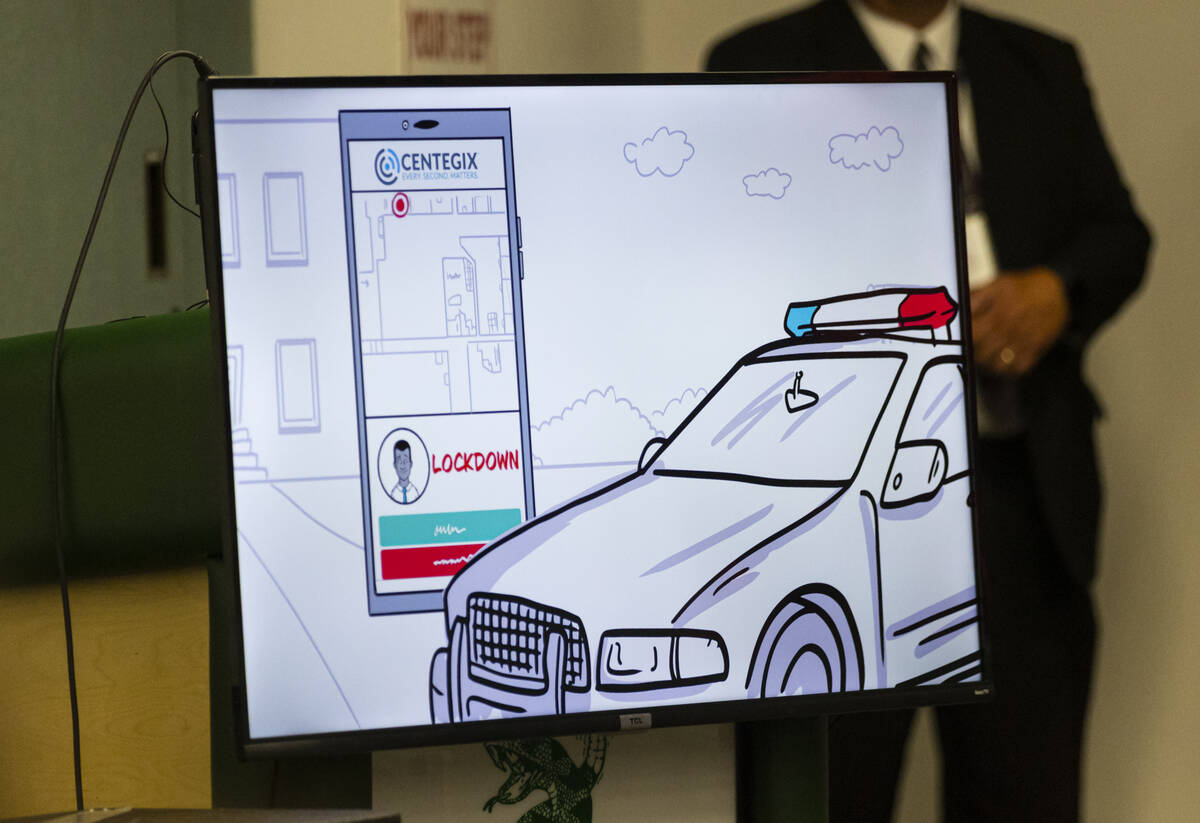 An informational video is played during an event marking the launch of a pilot program using an instant alert system at Mojave High School on Thursday, June 2, 2022, in North Las Vegas. (Chase Stevens/Las Vegas Review-Journal) @csstevensphoto 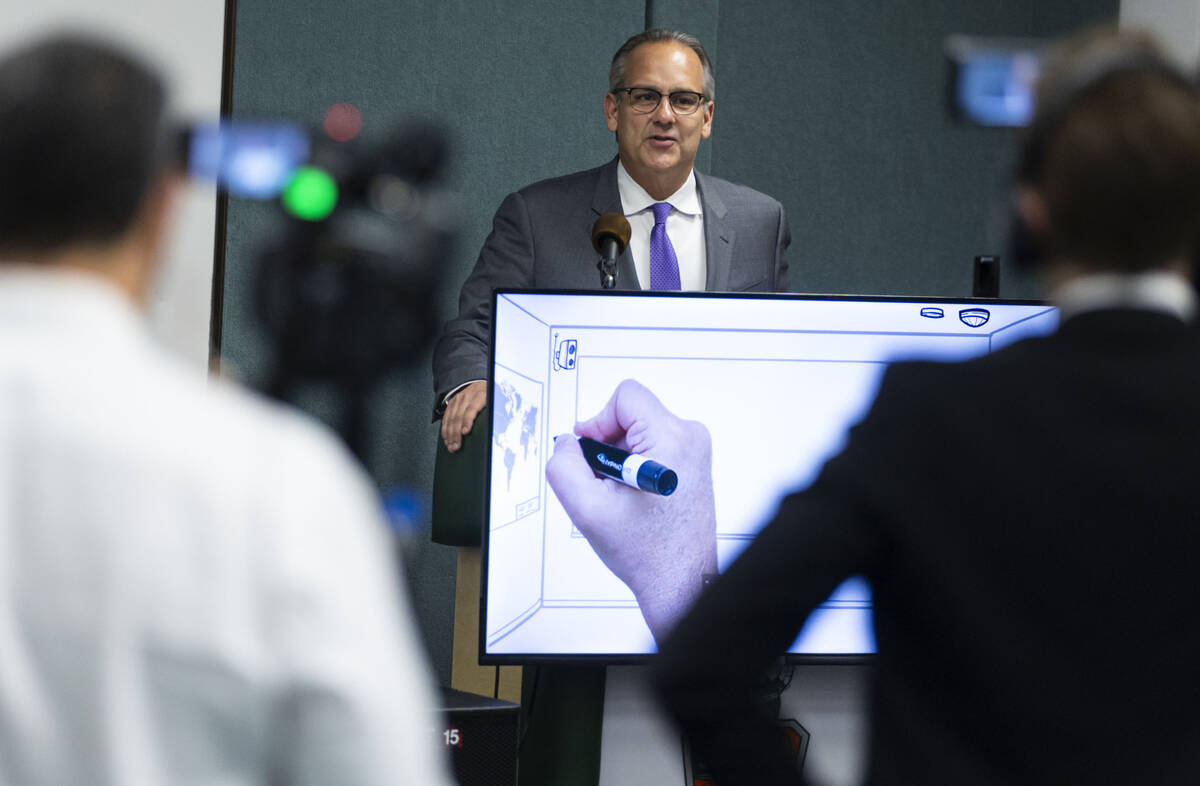 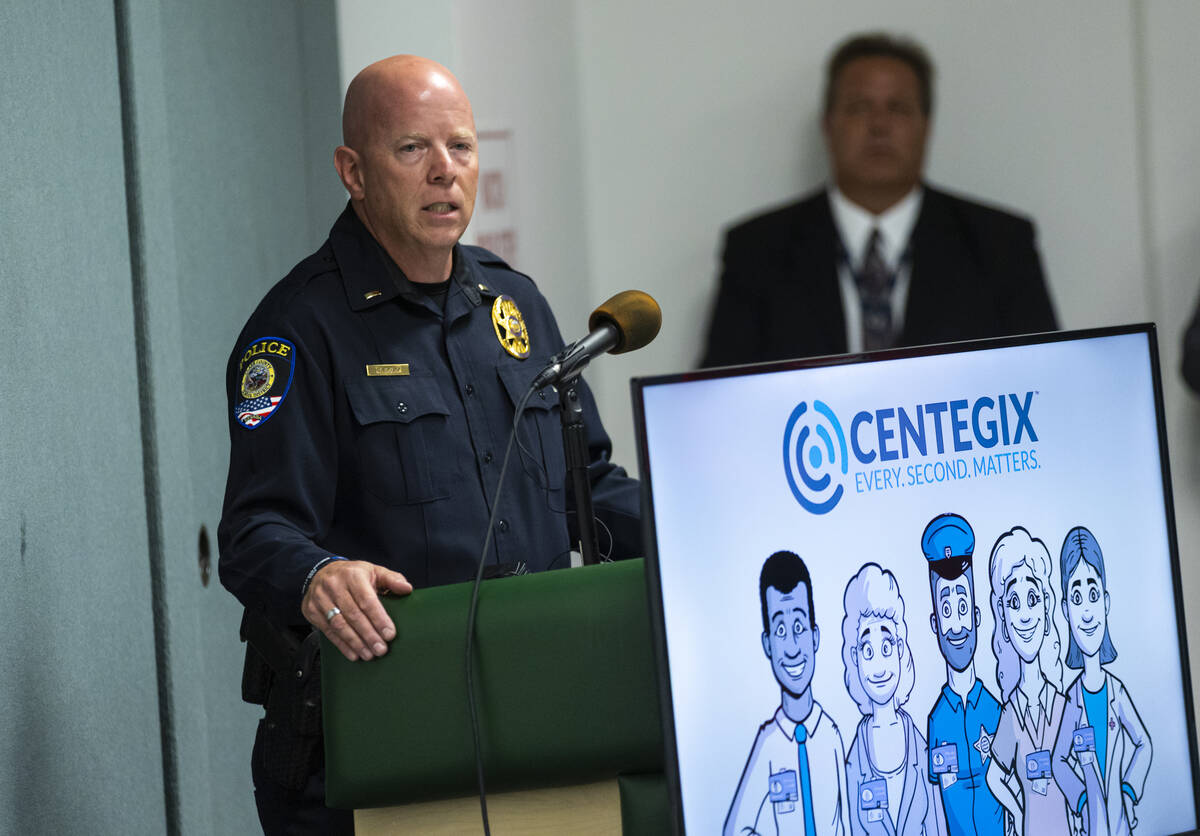 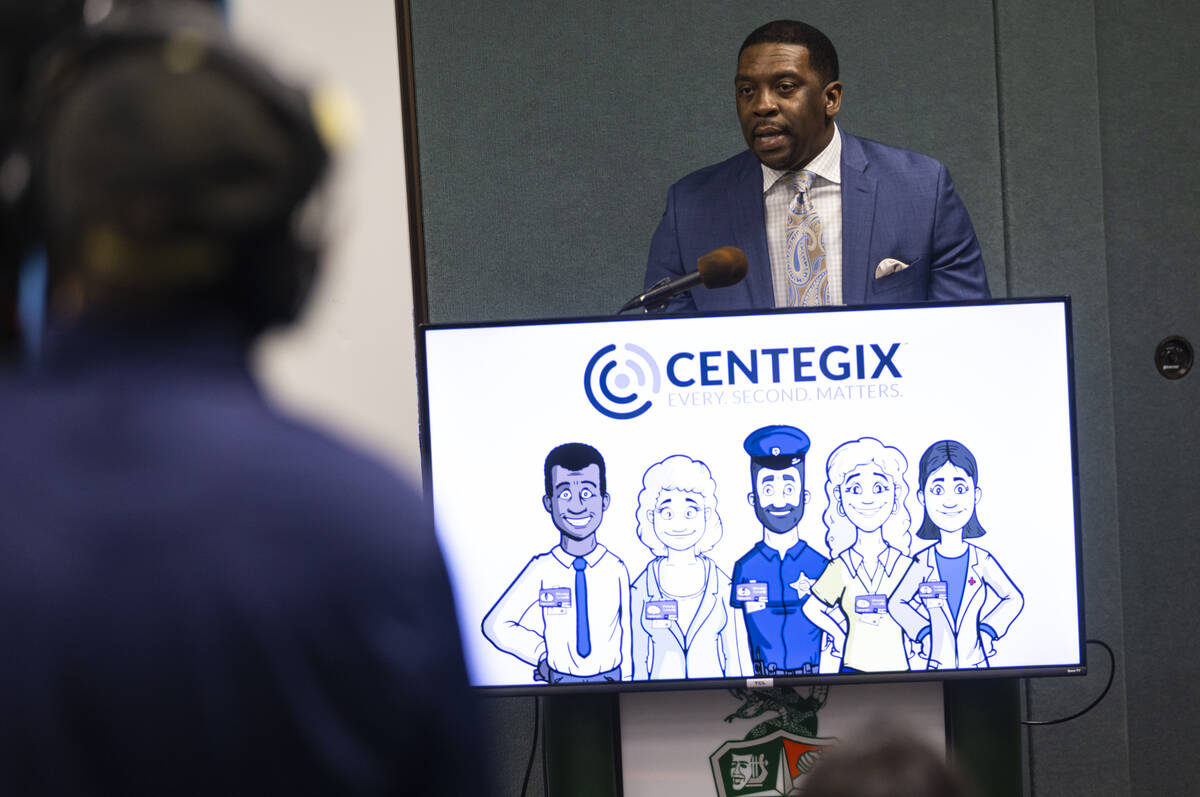 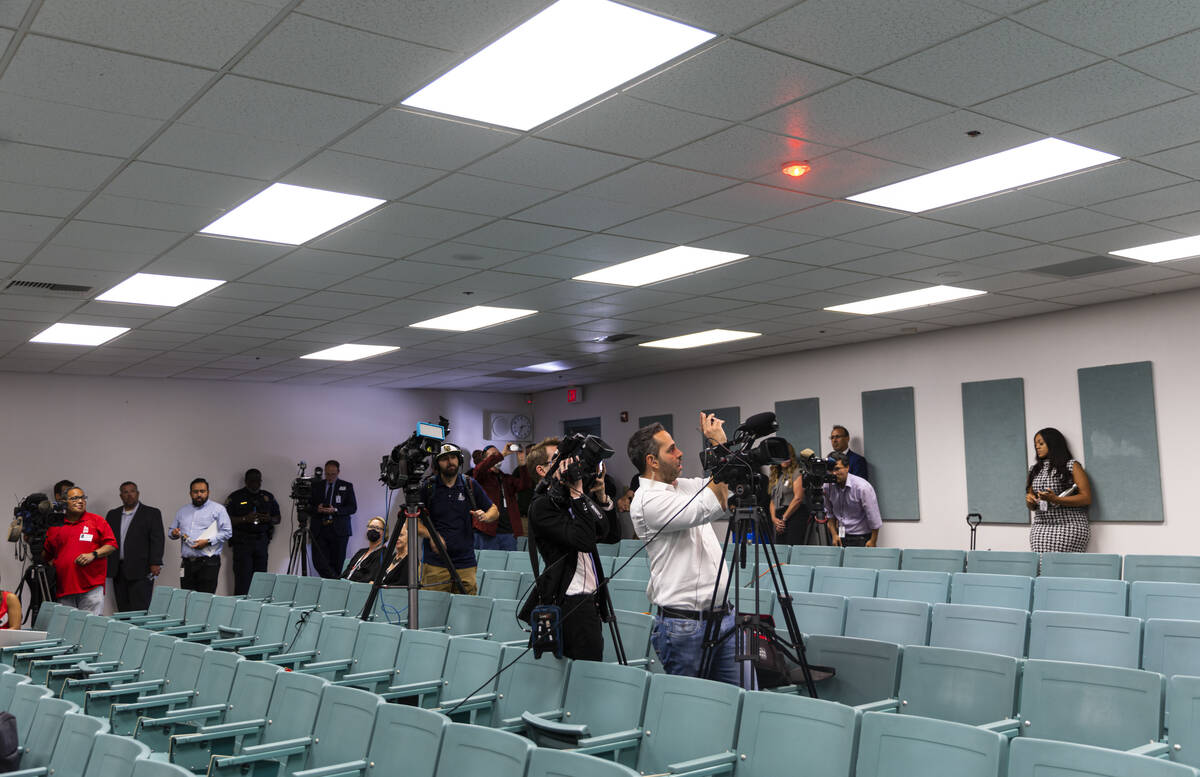 Journalists record as school officials look on during a lockdown demonstration at an event marking the launch of a pilot program using an instant alert system at Mojave High School on Thursday, June 2, 2022, in North Las Vegas. (Chase Stevens/Las Vegas Review-Journal) @csstevensphoto

The Clark County School District is rolling out an instant alert system at nine schools this summer in response to concerns over a spike in violence on campuses this year.

As of Thursday, the district had rolled out CrisisAlert badges that will be worn by staff at four high schools. It plans to install the alarms and train staff at five more high schools by next week.

When a button on the badge is pressed, school employees can initiate a staff alert, which will call for immediate help from the school principal, nurse or school resource officer to the employee’s location, or it can trigger a campuswide emergency lockdown.

Superintendent Jesus Jara and other district officials announced the upgrades at a news conference Thursday.

“This is an ongoing body of work that we are doing to make sure that we really protect all 305,000 students and 43,000 employees,” Jara said.

The four schools where the alarms have been installed and distributed are Basic, Clark, Durango and Mojave High schools.

The alarms will be installed at Centennial, Cheyenne, Del Sol, Liberty and Palo Verde High schools by the end of next week.

However, the alarm system differs from the emergency response system that the district implemented at Eldorado High School in April following the violent assault of a teacher. In response to the attack, the district said it would implement new protocols and safety measures, including panic buttons for teachers and staff to reach leadership and first responders from their location, with Eldorado taking priority for the new measures.

Clark County School District teachers already use a tool called audio enhancement to project their voices in the classroom. A panic-button feature included with the audio enhancement devices was rolled out at Eldorado this year.

Jara said Thursday that the district was piloting two systems to see which one gave the district “the best value to protect our staff.”

Michael Wilson, the school district’s director of emergency management, said that at the end of the pilot program, the district would solicit feedback from teachers, administrators and staff to assess what is working for each program.

“As we’ve looked at programs, we’ve tried to select ones that are simple and easy to do,” Wilson said.

Jara could not answer how much the new alarm system would cost. Instead, he called it a “reallocating of dollars.”

“This is a priority,” he said. “Our children and our staff need to be safe. We are prioritizing our existing dollars to make sure that our staff is safe.”