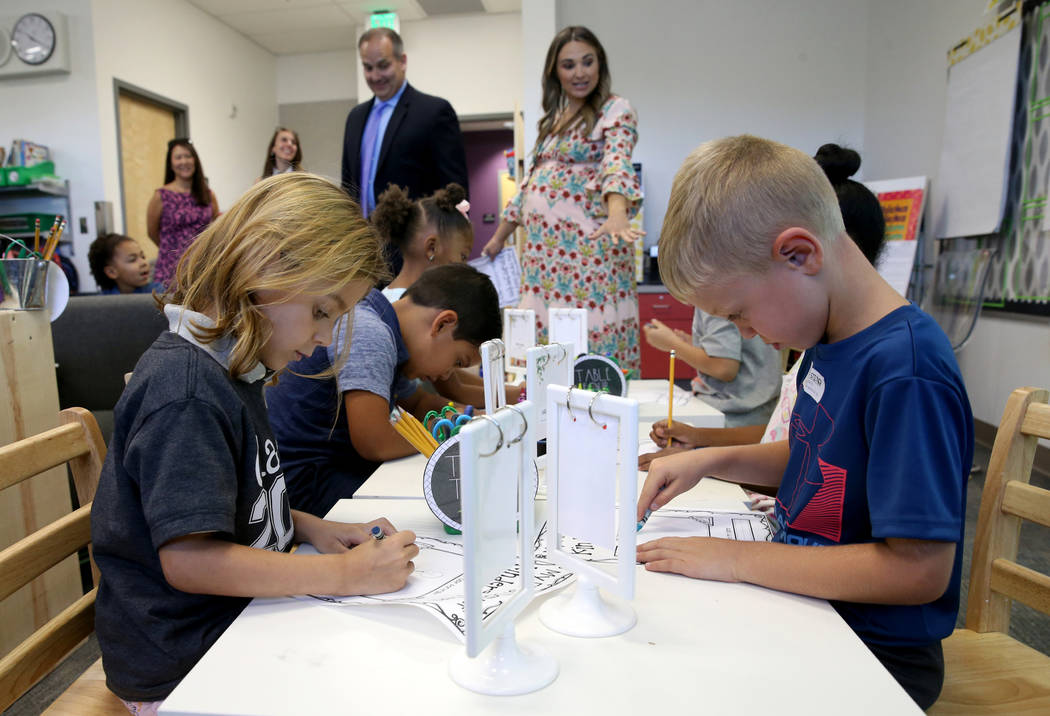 Wilhem DeSouza, left, and Mason Stiltner in Katie Rios' kindergarten class on the first day of school at Bonner Elementary in Las Vegas Monday, Aug. 12, 2019. Many parents hearing for the first time Tuesday about a possible strike next month by Clark County school teachers were supportive of the action, saying they back teachers and want better funding for education in the state of Nevada. (K.M. Cannon/Las Vegas Review-Journal) @KMCannonPhoto

Many parents hearing for the first time Tuesday about a possible strike next month by Clark County school teachers were supportive of the action, saying they back teachers and want better funding for education in the state of Nevada.

Parent Melody Pash, interviewed during morning drop-offs outside Staton Elementary, said she had not yet heard that the teachers union warned that its members would strike on Sept. 10 if an acceptable contract is not approved by the end of this week.

But Pash, who has two kids attending Staton and has family members who work as teachers in the Clark County School District, said it’s not only that teachers aren’t paid enough, but that they’re expected to spend their paychecks to make up for budget cuts for classroom supplies.

“They have to buy all kinds of stuff. There’s even a $25 STEAM fee now,” said Pash, adding that she also purchased some supplies for her children’s classrooms. “They need more money.”

At Helen Marie Smith Elementary, parent Carrie Fragoso said she supports teachers doing what they have to do to bring about change.

“I’m all for what teachers need, and right now they don’t get what they need,” Fragoso said.

“These teachers have been getting the short stick for so very long and I feel like education funding in Nevada is so poor and education is so not a priority,” she said. “We need to do something dramatic. So if the teachers feel so inclined to do this, I’ll absolutely support (it).”

Kesisian said her job allows her flexible hours so her children can stay home with her in the event of a walkout.

Making arrangements for students left without their classroom teachers would likely have ripple effects throughout Clark County. Staton parent Shelby Cull said a strike would not be good for her child care situation.

“We would have to figure it out,” Cull said.

Still, parent Mike Bohannon laid the problems squarely at the feet of the state Legislature, which he says has failed to properly fund education for years.

“If they spent the money they’ve got on what’s needed, we wouldn’t have a teachers’ strike,” he said.

Melissa Kendall, a recent transplant from Iowa whose first experience with CCSD was enrolling her son in kindergarten at Staton, said the two states’ approaches to K-12 education are very different.

“Iowa teachers are so well-trained, the schools are so good and there’s such support,” Kendall said. “We were already worried about the schools moving here. It makes me nervous.”