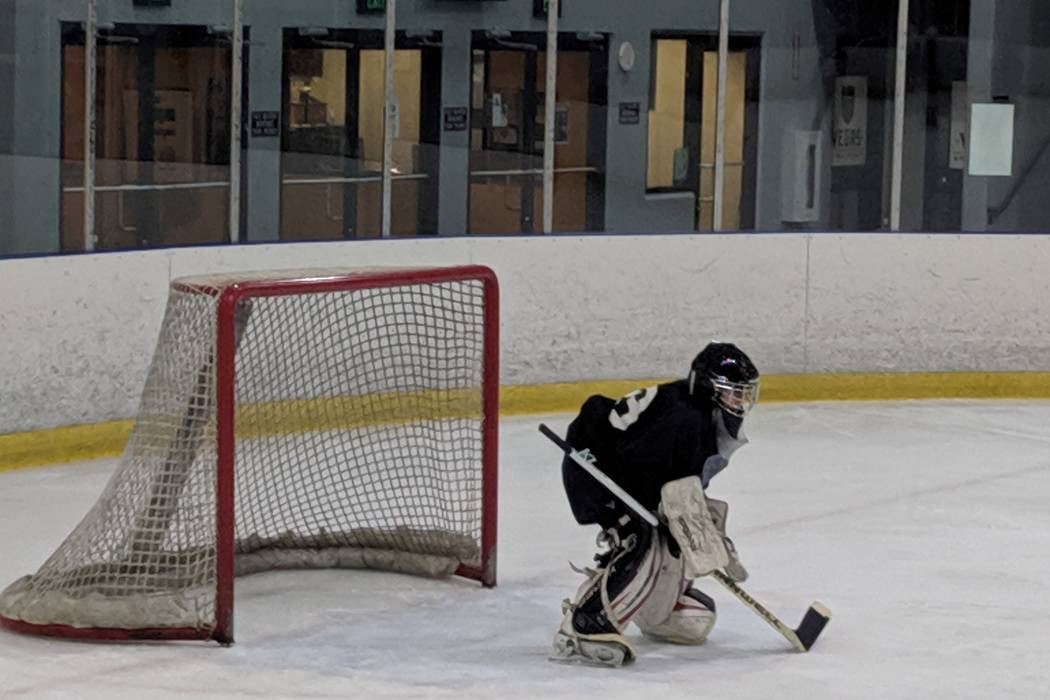 Jake Kielb, who plays on the PeeWee team, is in net at Sobe Ice Arena. (Gina Kielb) 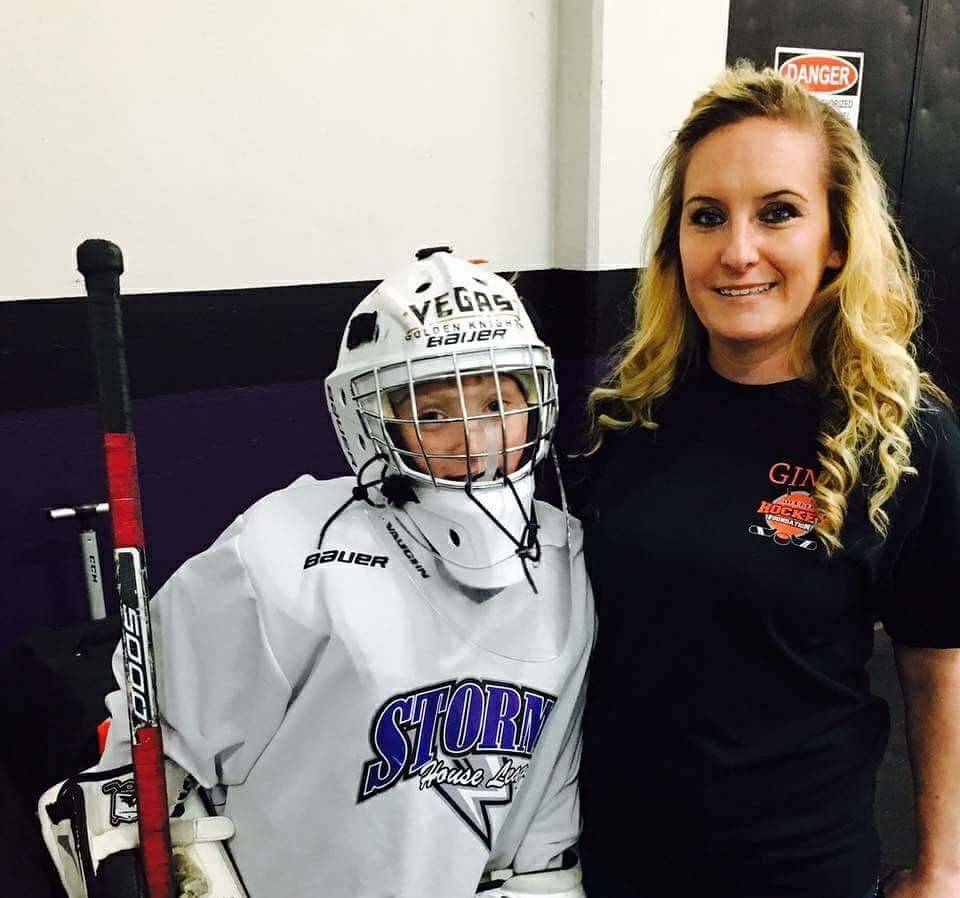 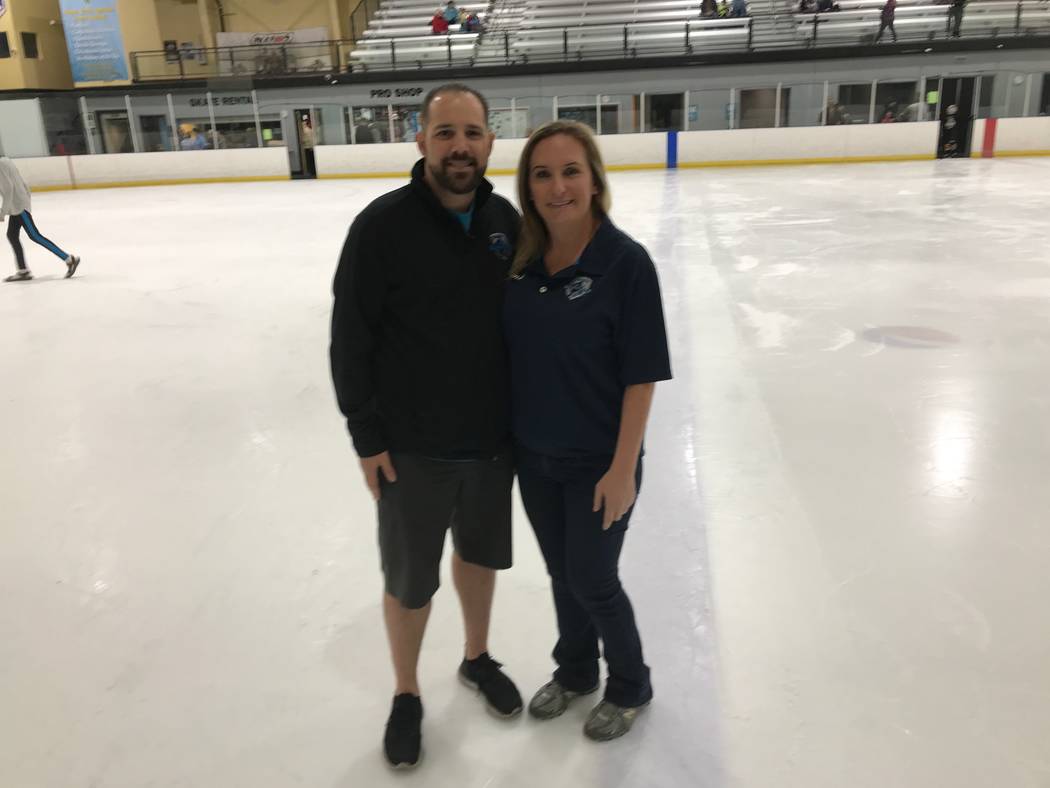 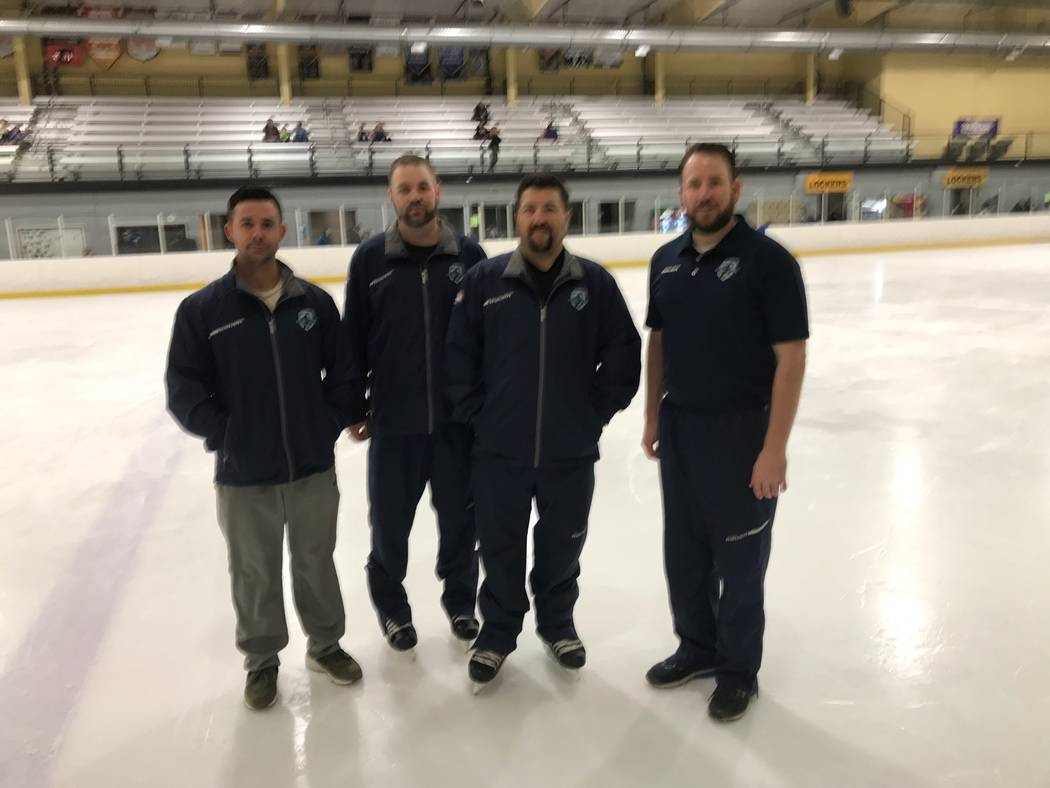 Four of the volunteer team coaches are on ice at the Sobe Ice Arena; from left are Alex Granda, Jared Harvick, Geoff Sneed and Marty Martin. (Herb Jaffe) 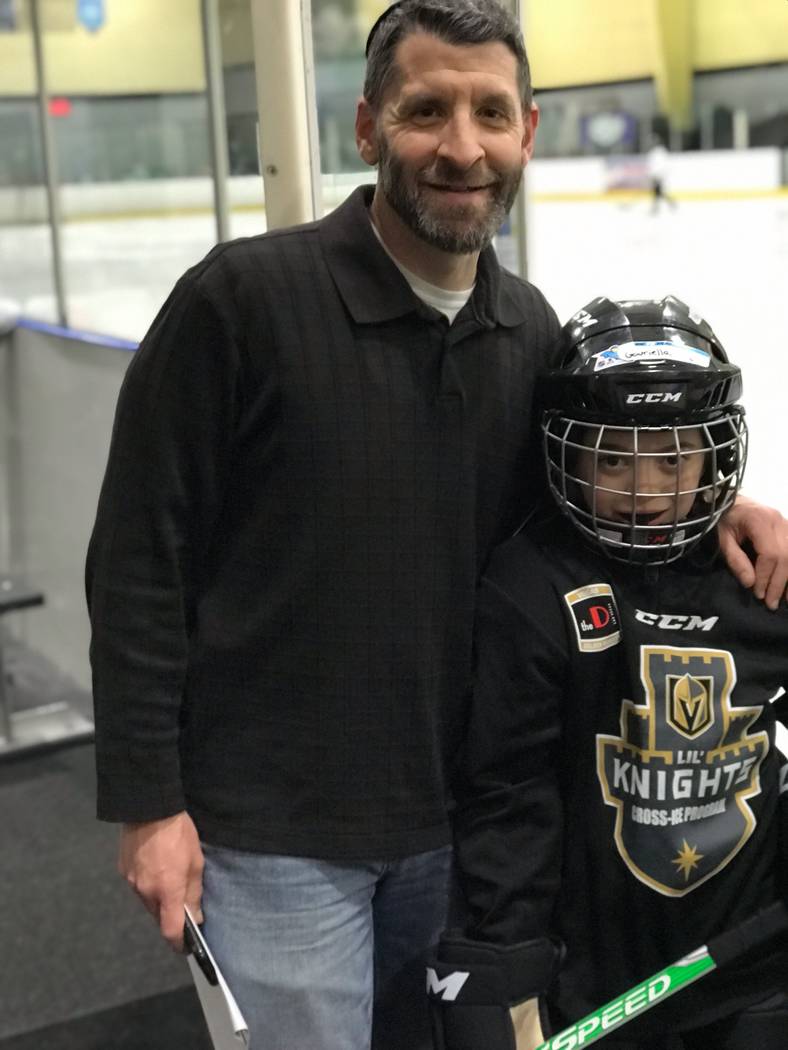 Steve Riback and daughter Gabi, 9, one of four girls on the Squirts. (Herb Jaffe) 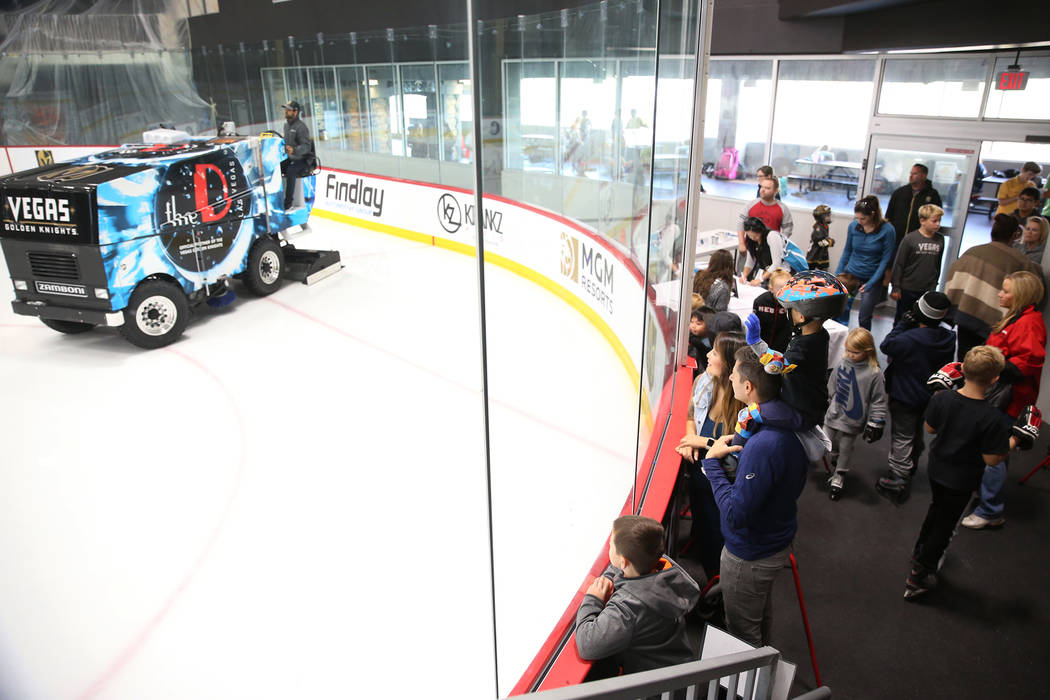 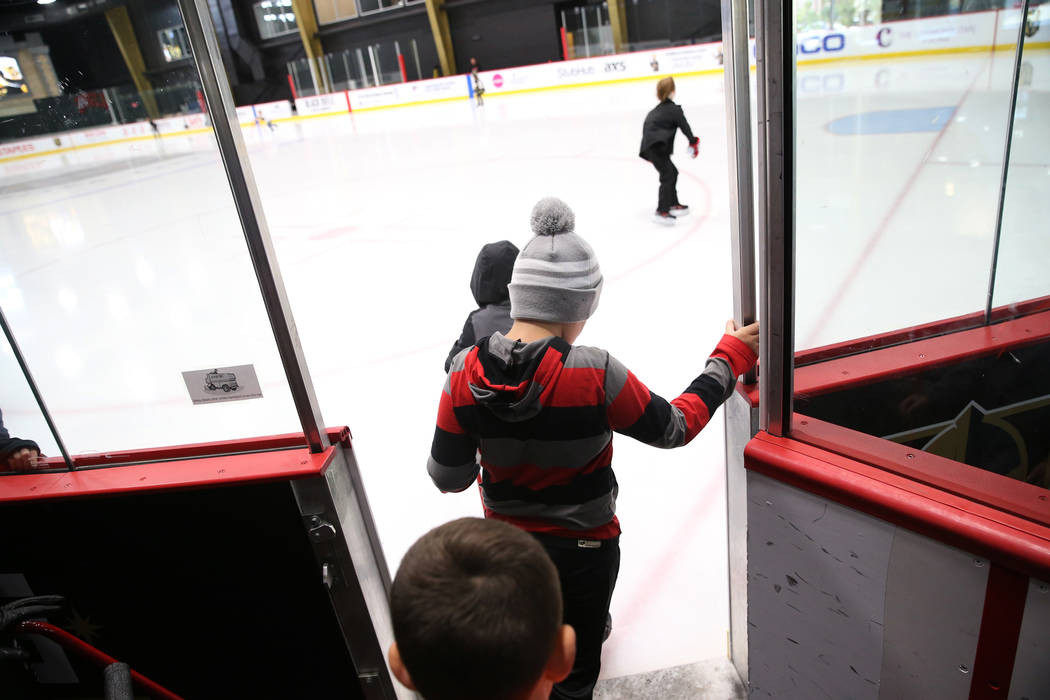 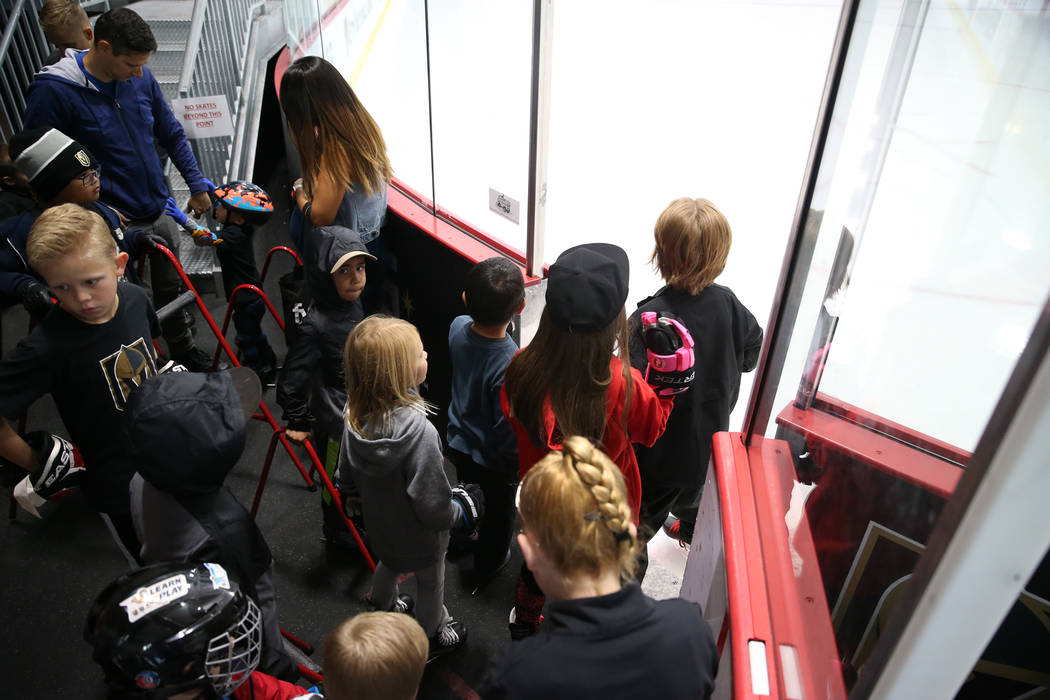 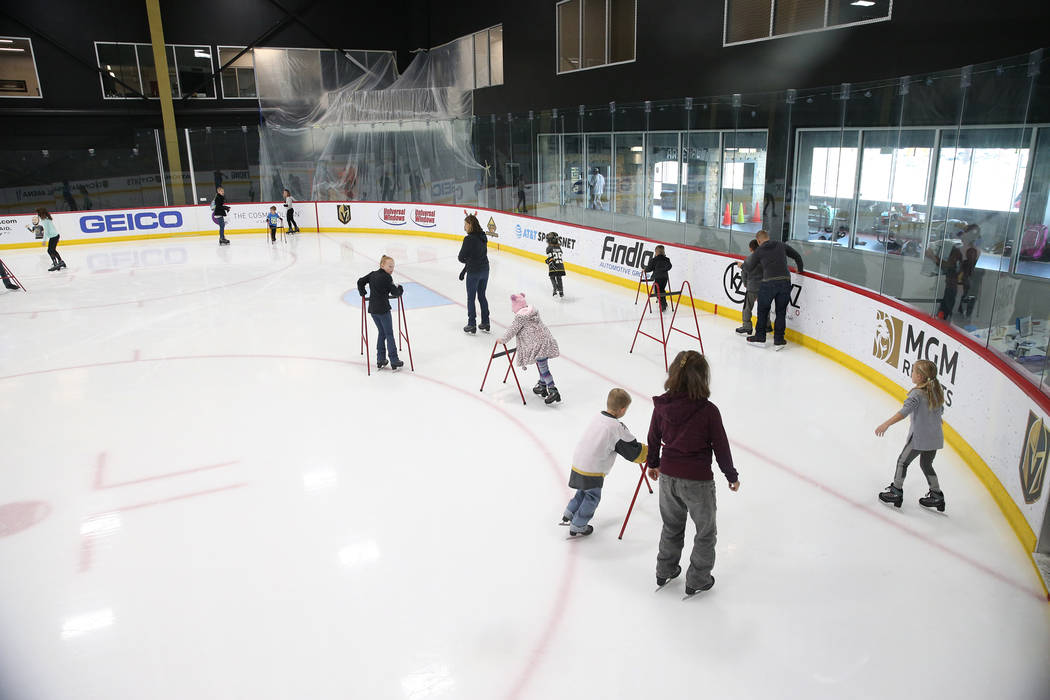 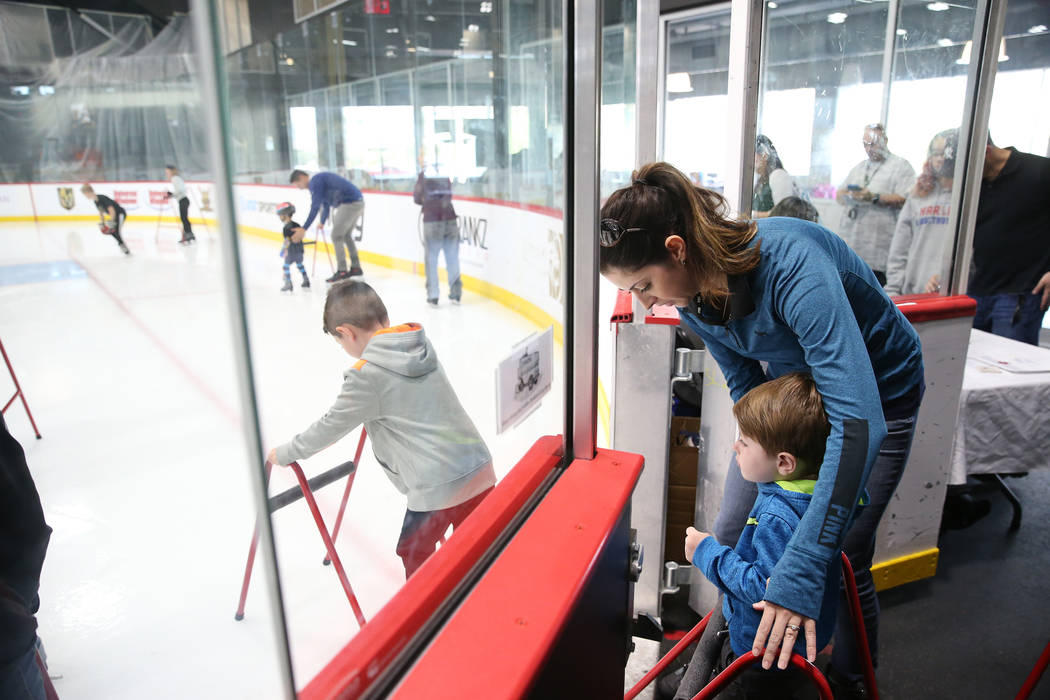 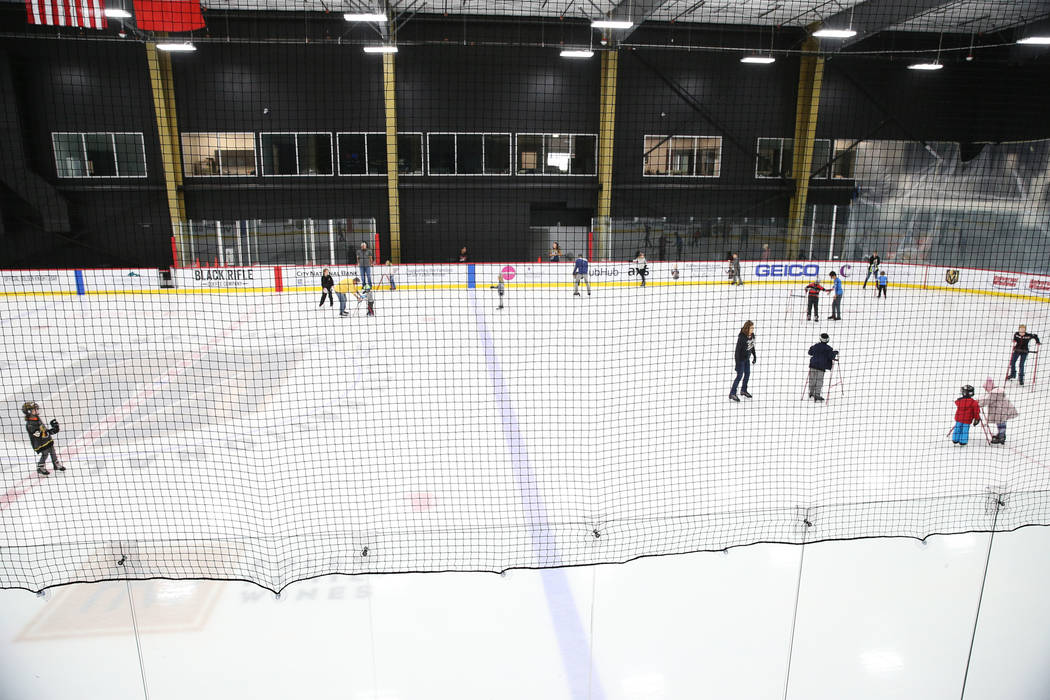 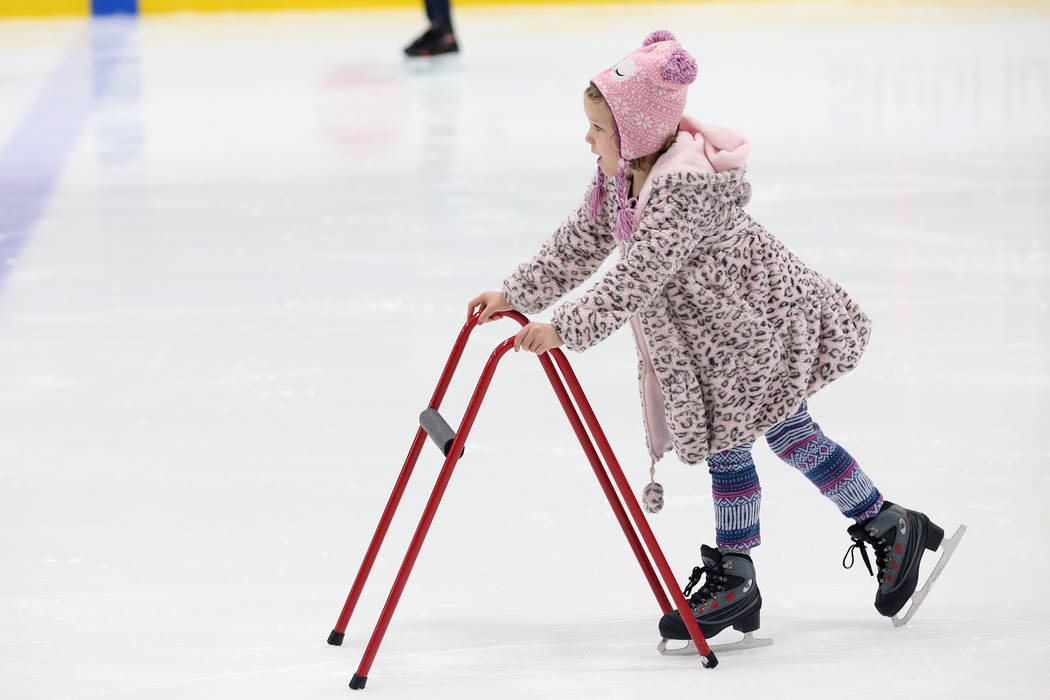 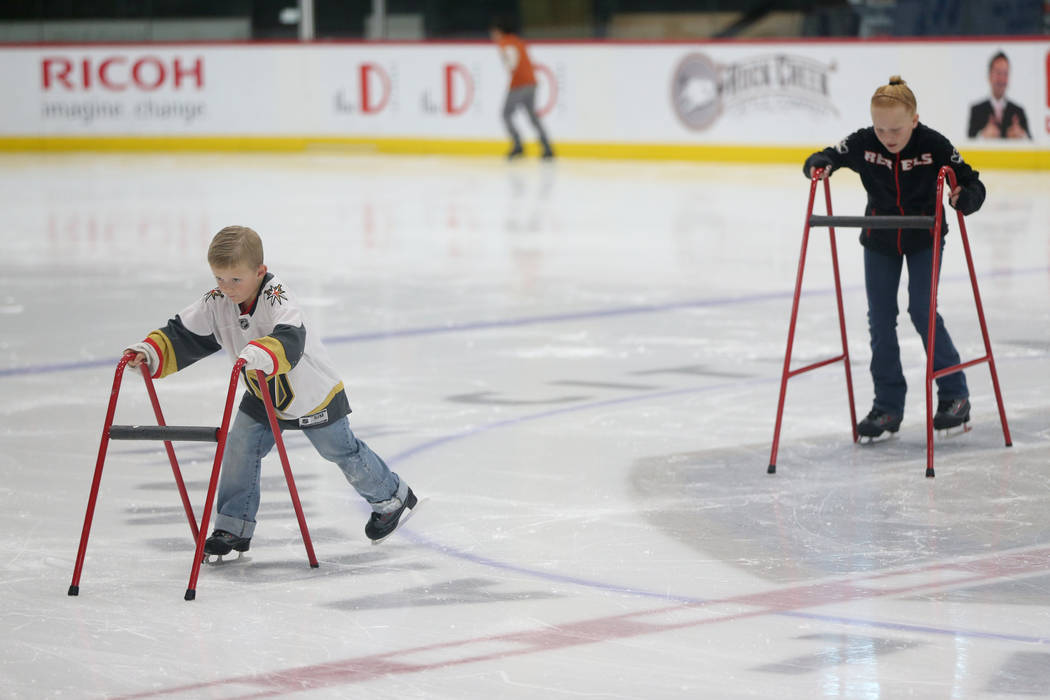 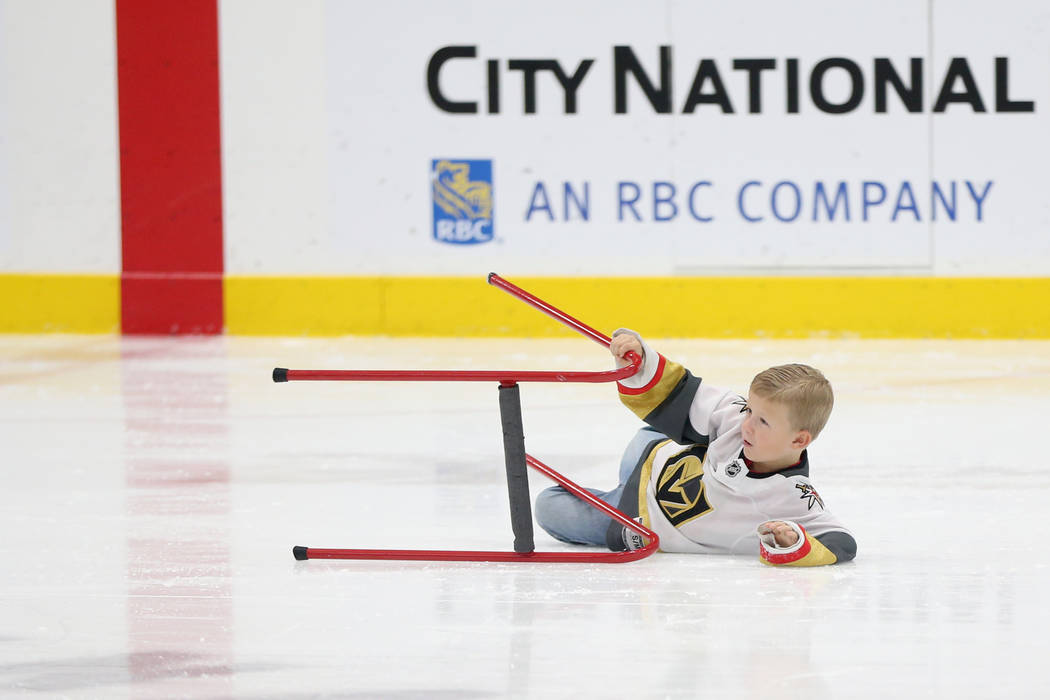 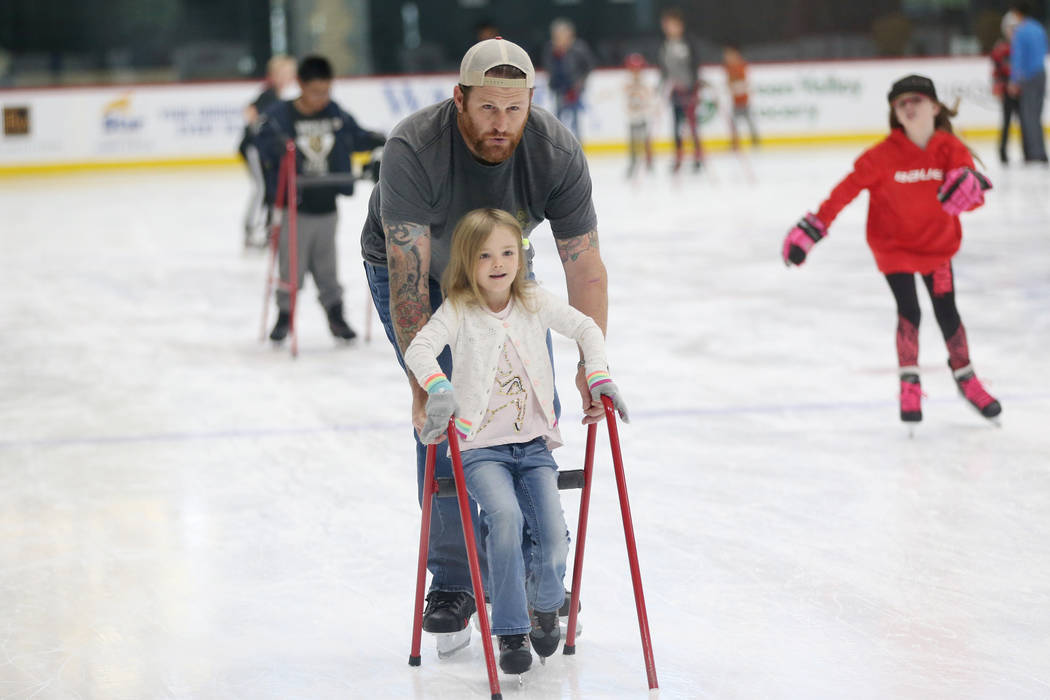 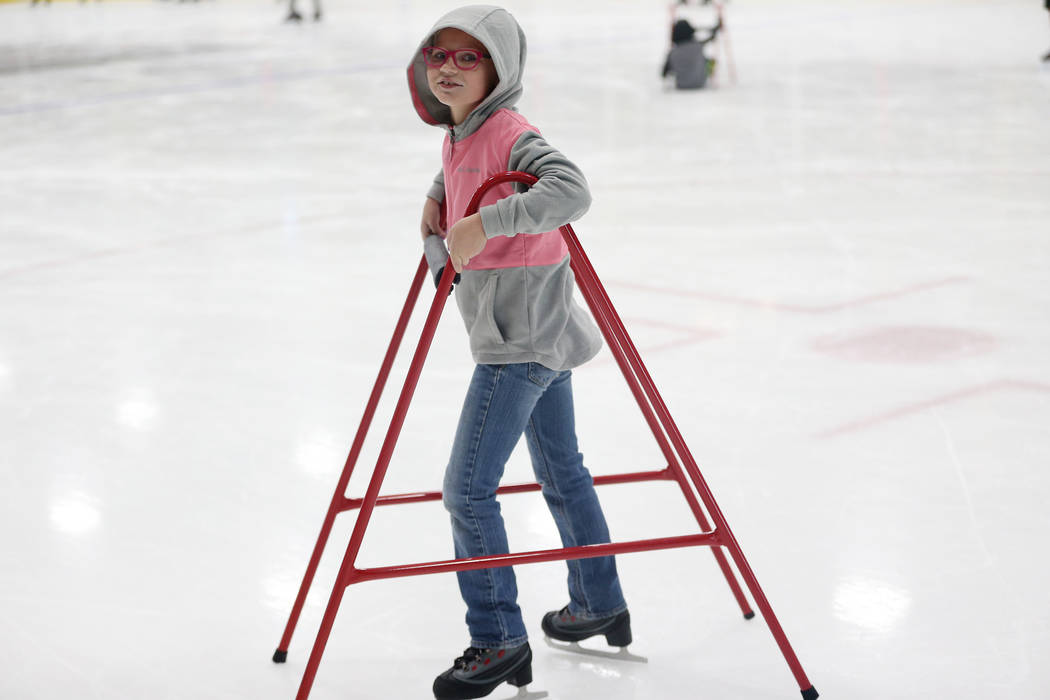 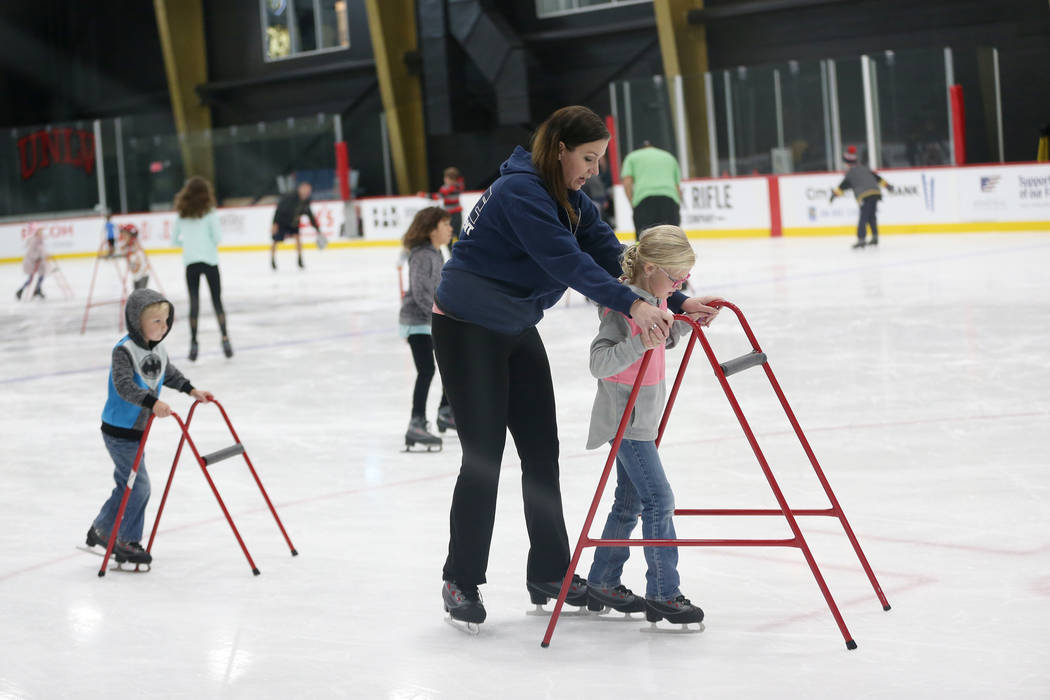 No question about it, hockey fever has spread to all corners of Las Vegas, irrespective of the Vegas Golden Knights being knocked out of this year’s Stanley Cup Playoffs due to some shoddy officiating.

But one thing you can’t deny: It was the Golden Knights that brought hockey fever to the desert. And if you have any doubts about how contagious the disease has become in just two years, try visiting Sobe Ice Arena at the Fiesta on any Sunday, where you’ll find Mites, Squirts and PeeWees, in full uniforms, slapping pucks from one end of the rink to the other.

These are little kids who play in a hockey league called the Sobe Ice Warriors. There are 10 teams in the league. Four are composed of Mites, ranging in age from 5 to 8. The Squirts are 9- and 10-year-olds and make up two teams, and the PeeWees, ages 11 and 12, consist of four teams.

As for how many kids play in the Sobe Ice Warriors, even Gina Kielb and Bryan Toupe, both of whom founded the league in November 2017, have difficulty coming up with an exact count, beyond saying “it’s something more than a hundred.”

Kielb and Toupe are employed in non-hockey jobs but donate their time on weekends to the development of youth hockey, as do 10 other adult skaters who volunteer their time to coach the teams. Meanwhile, the steady flow of new kids eager to play hockey can easily be attributed to its growing popularity in Las Vegas.

“The first teams were formed last September,” said Toupe. “And we have doubled the number of kids playing in the league since the start of the winter season.” That was from January into April. The summer season is now in force through August.

“Prior to forming the teams, we had a lot of beginners who were just learning how to skate,” Kielb added. She noted that a program jointly promoted with the Golden Knights Foundation, through the efforts of its president, John Coogan, produces more and more youngsters learning how to skate for the first time at City National Arena, many of whom look to play hockey.

That gave rise to the Sobe Ice Warriors, especially after Kielb and Toupe were able to negotiate for more Sunday ice time in Sobe Ice Arena, at reasonable costs, thanks to the efforts of ice rink manager Wally Lacroix.

But that’s only one part of the story. The other part is Jake Kielb’s Hockey Foundation, a nonprofit charity that was formed in early 2016 to provide the equipment youngsters need to play hockey.

“Jake Kielb is my son. He’s 12 years old and plays on a PeeWee team. He’s been playing hockey since he was 4, and I named the foundation for him because he and I typify the problem parents and kids often face when confronted with paying for hockey gear, which can run into the hundreds of dollars,” Kielb said.

“The foundation provides hockey gear for kids, and when they outgrow it we pass it on to other kids,” she explained.

She said the foundation raises funds for that purpose through contributions that are tax deductible under section 501 (c)(3) of the Internal Revenue Code. Kielb is president of the foundation, and Toupe is vice president.

They explained that the charity has raised more than $80,000 for youth hockey, including a $50,000 donation from the Albertsons’ Foundation and $10,000 from the Golden Knights Foundation. Further information is available on the website hockeyforkids.org.