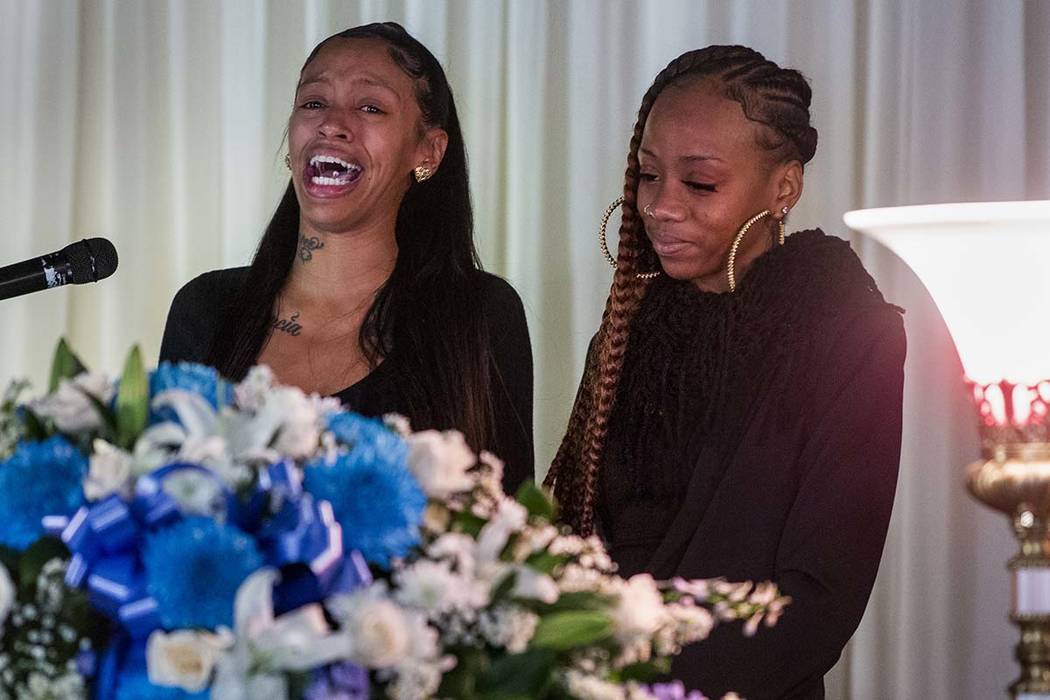 Sisters Ebony Hester and Derryon Burks comfort each other as they talk of wonderful past moments with their stepfather Don Bennett, a maintenance man and hero of the Alpine Motel Apartments fire, during his funeral service at Heritage Mortuary on Tuesday, Dec. 31, 2019, in North Las Vegas. (L.E. Baskow/Las Vegas Review-Journal) @Left_Eye_Images 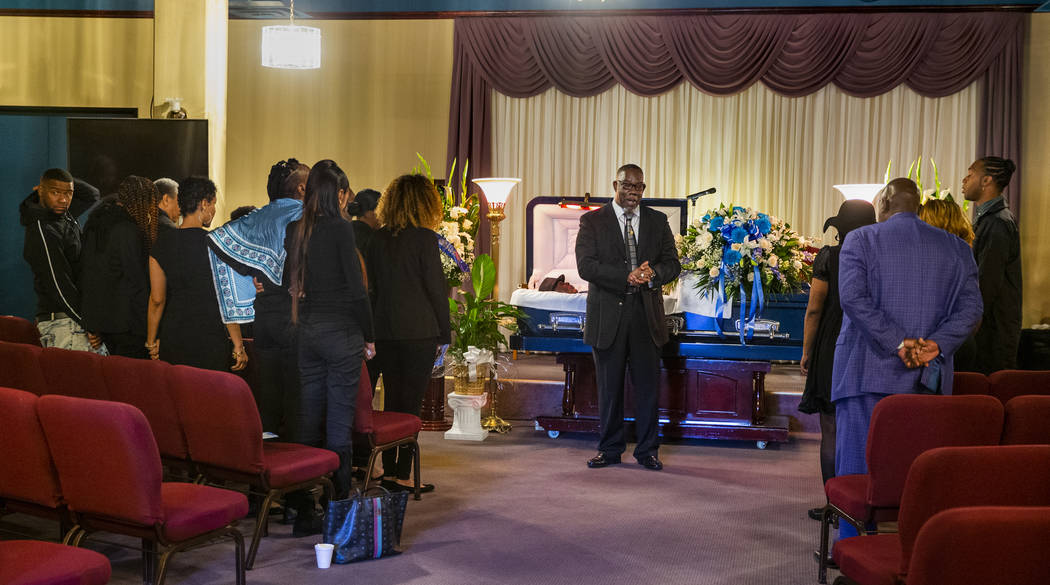 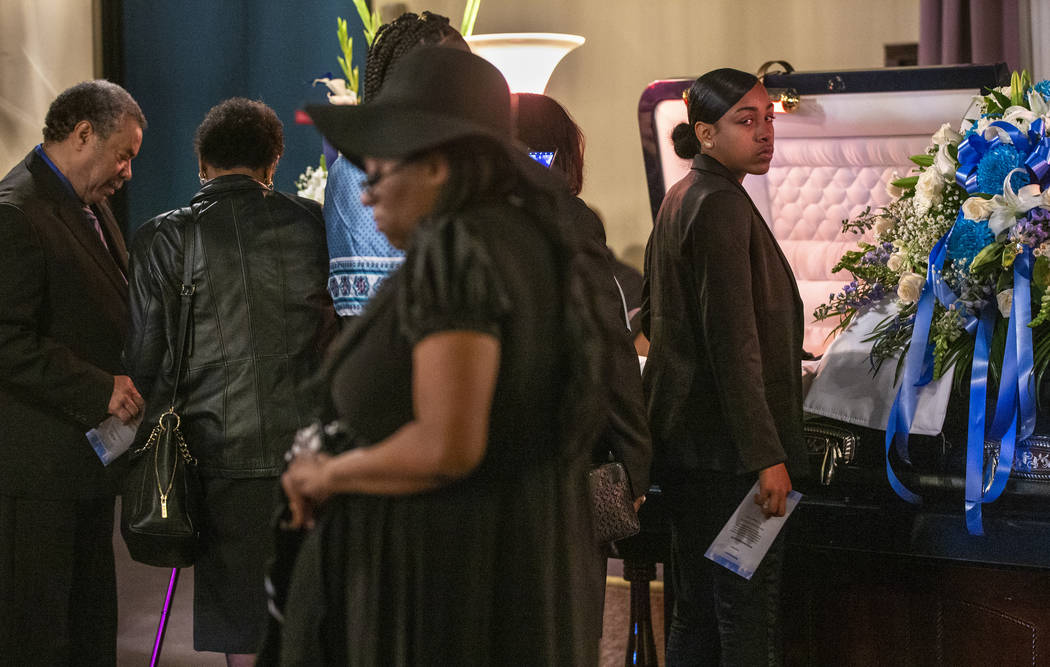 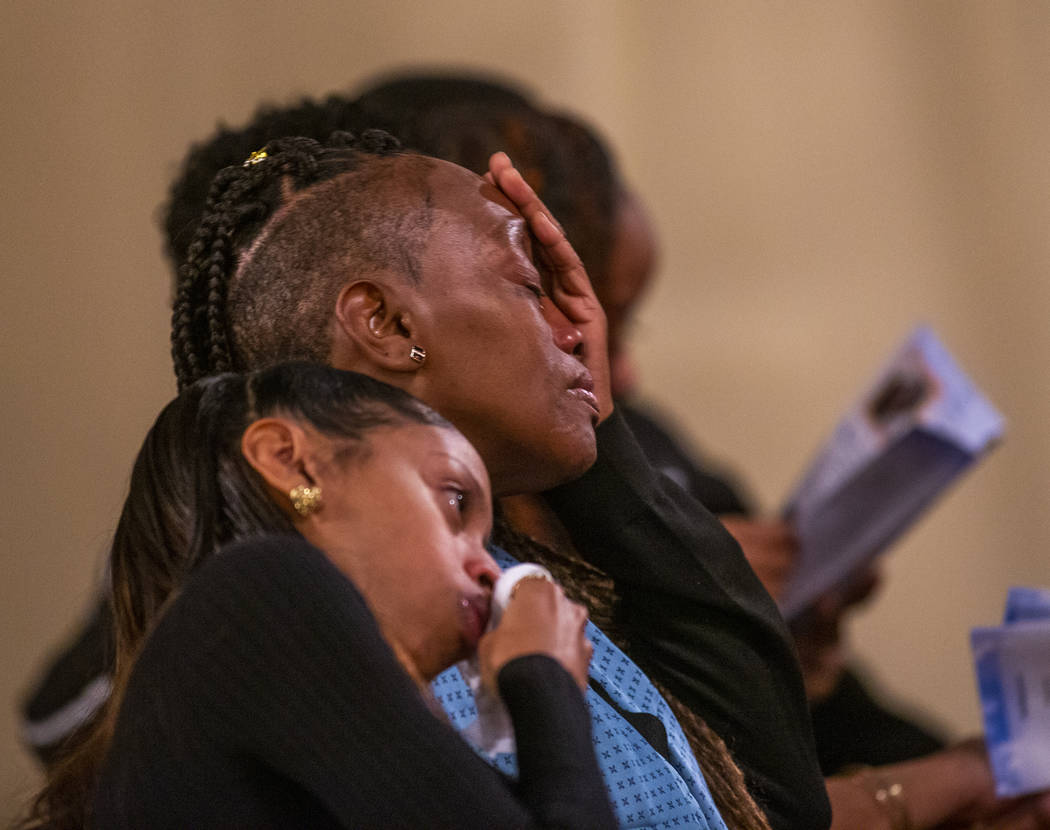 Family members become emotional during a funeral service for Don Bennett, a maintenance man and hero of the Alpine Motel Apartments fire, while being laid to rest at Heritage Mortuary on Tuesday, Dec. 31, 2019, in North Las Vegas. (L.E. Baskow/Las Vegas Review-Journal) @Left_Eye_Images 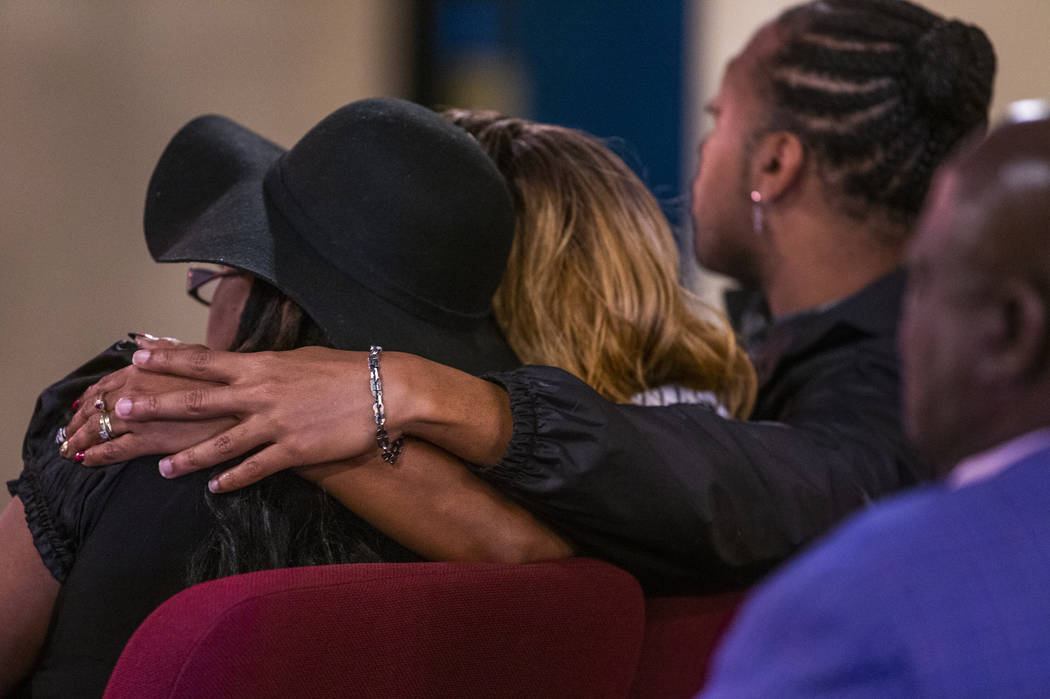 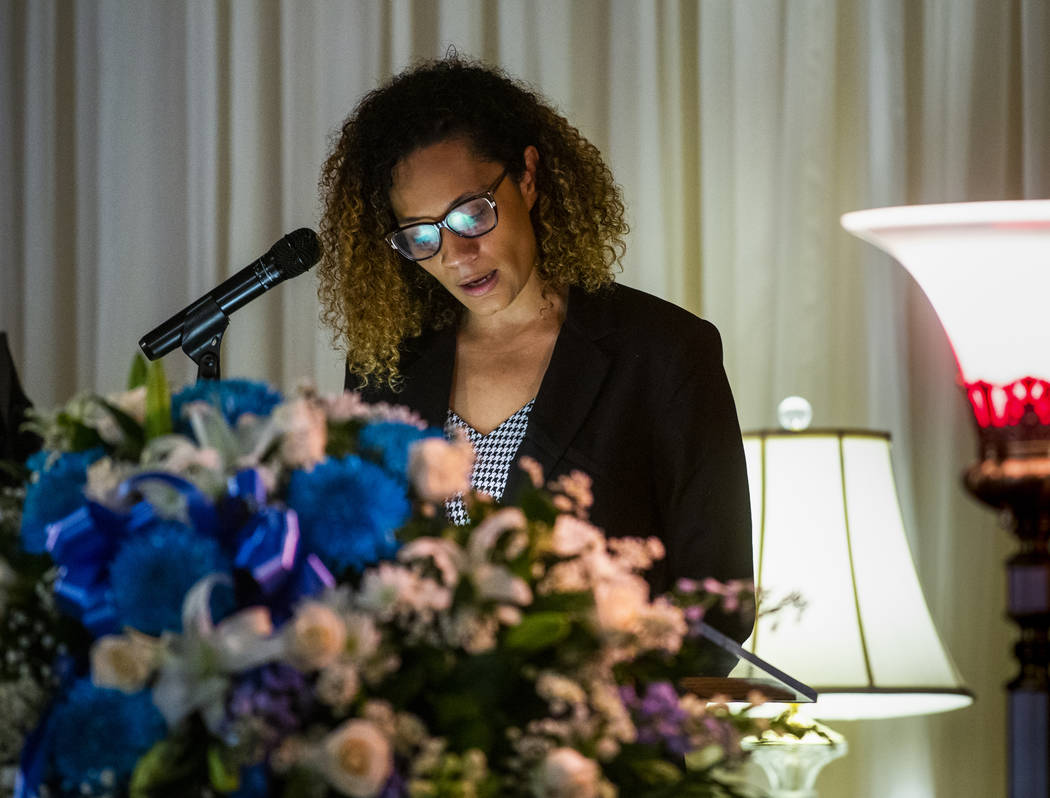 Diane Roberts tells the history of her father Don Bennett, a maintenance man and hero of the Alpine Motel Apartments fire, during his funeral service at Heritage Mortuary on Tuesday, Dec. 31, 2019, in North Las Vegas. (L.E. Baskow/Las Vegas Review-Journal) @Left_Eye_Images 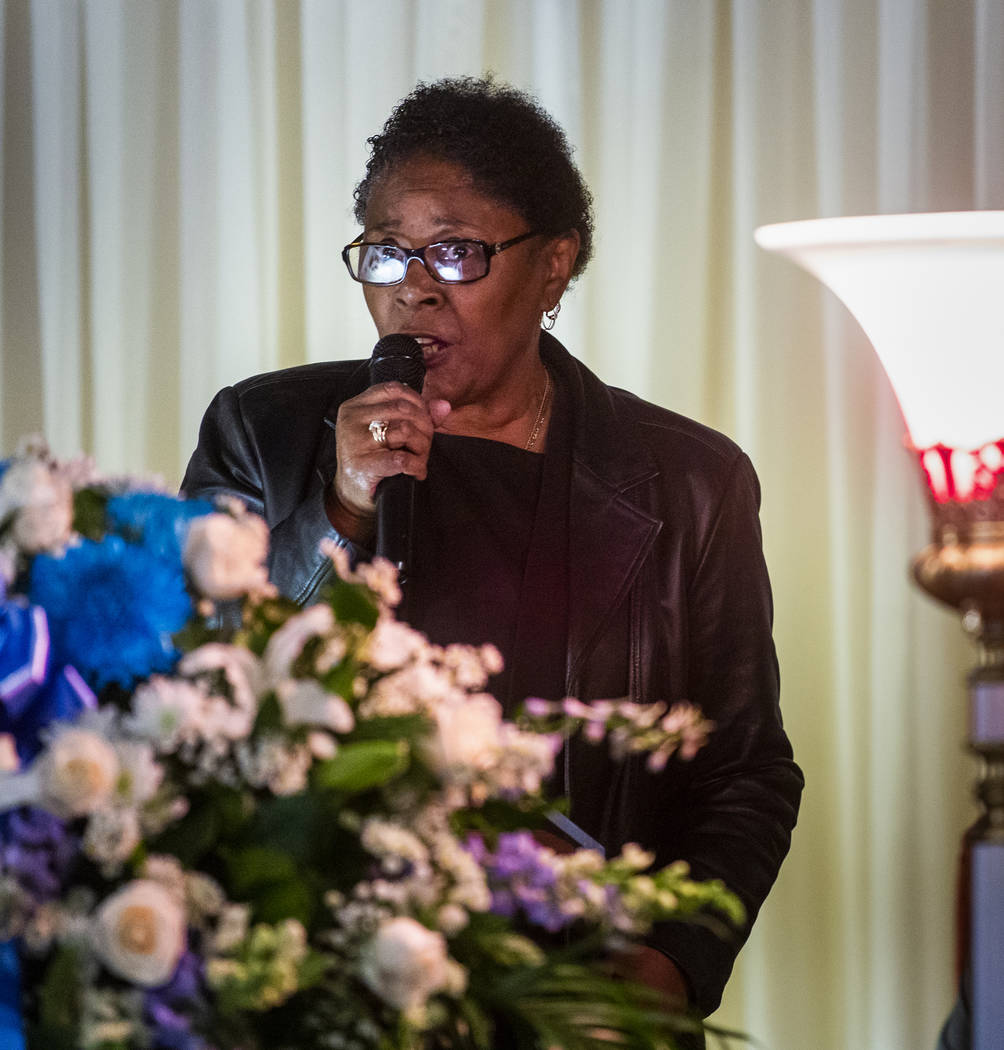 Patricia Murphy recalls a story of her brother Don Bennett, a maintenance man and hero of the Alpine Motel Apartments fire, during his funeral service at Heritage Mortuary on Tuesday, Dec. 31, 2019, in North Las Vegas. (L.E. Baskow/Las Vegas Review-Journal) @Left_Eye_Images 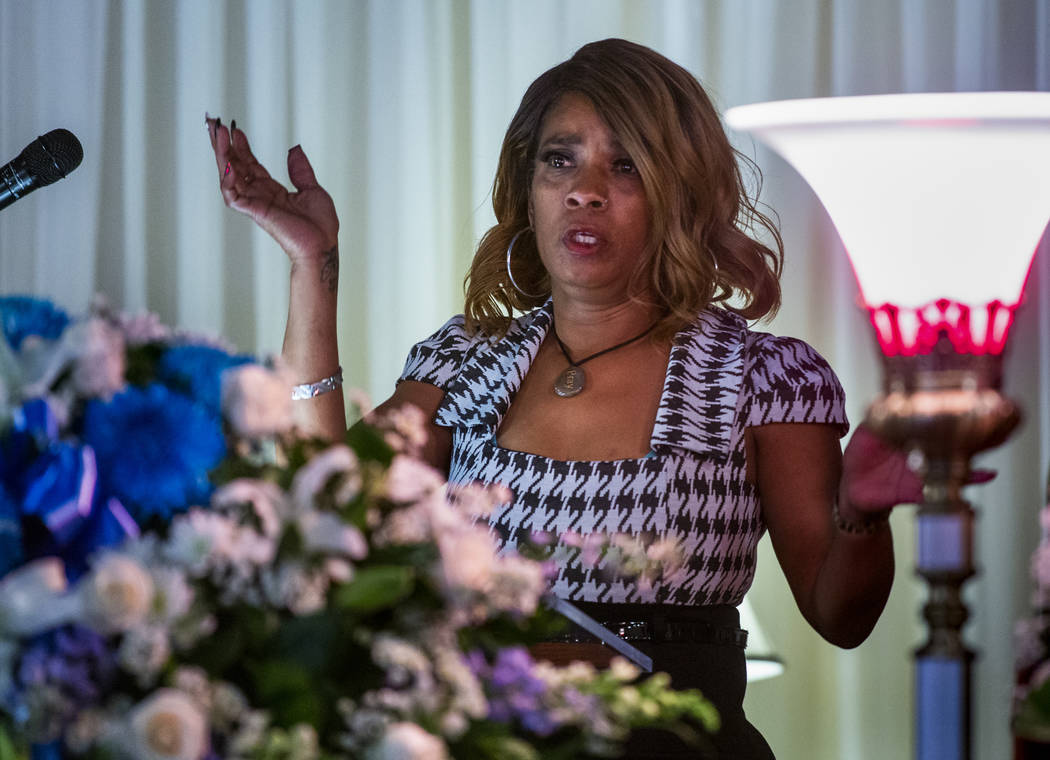 Linda Smith speaks about the kindness and bravery of Don Bennett, a maintenance man and hero of the Alpine Motel Apartments fire, during his funeral service at Heritage Mortuary on Tuesday, Dec. 31, 2019, in North Las Vegas. (L.E. Baskow/Las Vegas Review-Journal) @Left_Eye_Images

The Las Vegas Marine veteran who lost his life saving others from the Alpine Motel Apartments fire was laid to rest Tuesday, with family and friends alike hailing him for his bravery.

“This man right here, this is a hero,” former Alpine resident Timothy Henry said as he pointed to the casket of Don Bennett, 63, who both lived and worked as a maintenance man at the complex. “It’s sad he’s gone, and God knows I’m going to miss him.”

Henry and other survivors of the Alpine fire said Bennett rushed door to door in the burning downtown motel on Dec. 21, waking people up and alerting them to the fire. Bennett and five others perished, but residents of the Alpine said that if not for Bennett, many more would have died in the early-morning blaze at 213 N. Ninth St. in downtown Las Vegas.

At Tuesday’s service, one of Bennett’s sisters, Patricia Murphy, said her brother was extremely proud of his more than three years of service in the Marine Corps, starting at Camp Lejeune in North Carolina and later in Okinawa, Japan.

Murphy told a story about a visit by Bennett to her home in Virginia to illustrate his dedication to the Corps.

“He came to visit me. It was pouring down rain, so I get up, get my purse and I get ready to go to the store to make us some breakfast,” Murphy said. “So meanwhile, he had this long, green raincoat sitting on the chair.

“It was raining, so I grabbed the raincoat,” she recalled. “He said, ‘Hold it right there, girl. What do you think you are doing?’”

One of Bennett’s daughters, Diane Roberts, tearfully read an obituary for Bennett in which she referenced her father’s heroism, saying, “No greater love has a man than to lay down his life for his friends.”

Bennett’s selflessness certainly struck a chord with local residents, prompting many to donate to a GoFundMe account to pay for his funeral. As of Tuesday morning, charitable contributions to the account topped $16,000.

One anonymous donor gave $10,000 through the Southern Nevada Home Builders Association and issued a statement saying:

“While I did not know Donald Bennett, I was so touched by his heroism. As a fellow Marine who may have also served on Okinawa with him (we are similar in age) this is not surprising though, as Marines are bred that way. I love what Sgt. Major Witt said, ‘Marines Take Care of Their Own,’ on the battlefield and off. And to the Las Vegas community who also comes together during these tragedies to ‘take care of our own,’ I am honored to make this donation to the family.”

Bennett’s brother, Charles Bennett, expressed thanks at the service, which was at the Heritage Mortuary on North Rancho Drive, to all who had donated to pay for his brother’s funeral and help the family. He said Texas Station casino had provided hotel rooms and food for Bennett’s family members as they made their way to Las Vegas and navigated through the heartbreaking tragedy.

“They went way out on a limb for us,” Charles Bennett said. “We want to thank everyone for their generosity.”

Bishop Tyrone Seals presided over the service. He too referenced Don Bennett’s heroism as well as his commitment to his faith throughout his life.

“If Donald could wake up right now, he would say, ‘I did what I did because God put it in my heart,’” Seals said.