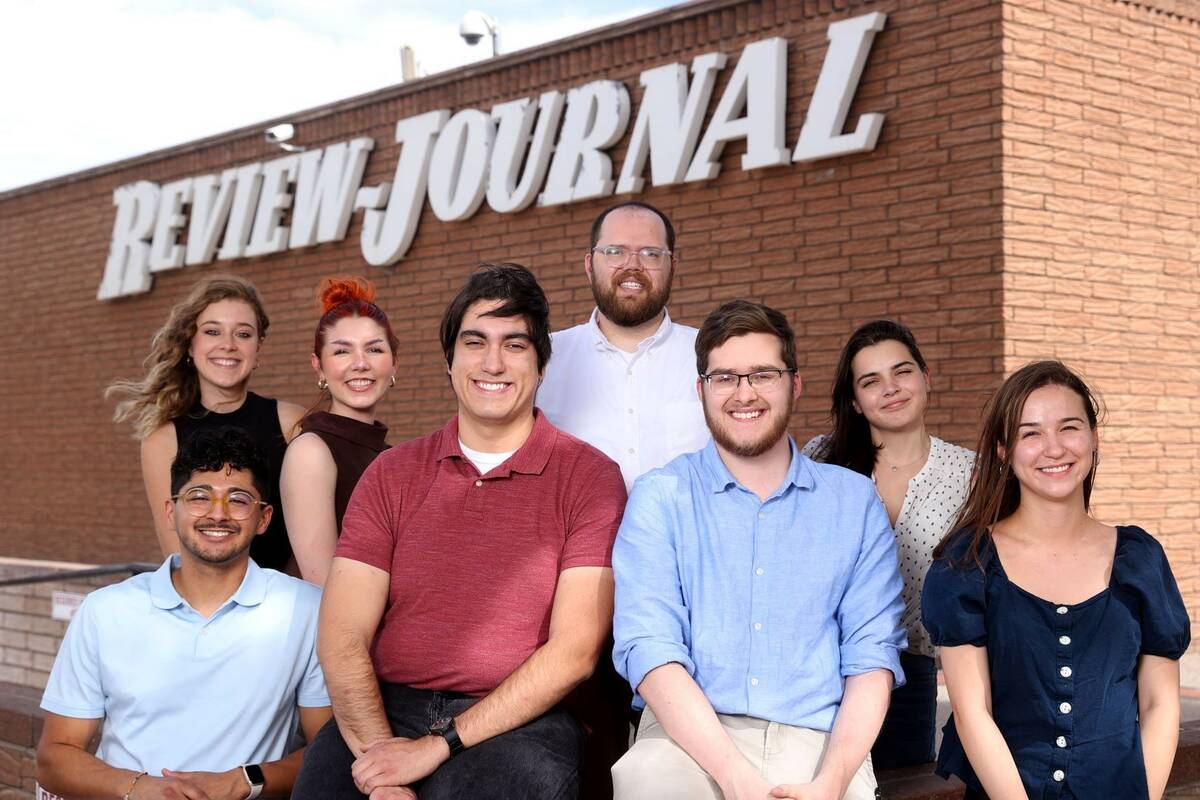 The news organization has welcomed Steel Brooks, Emerson Drewes, Taylor Lane, Glivell Piloto, Nick Robertson, Jimmy Romo, Teghan Simonton, Maria Staubs and Alex Wright to its staff this summer. They will work across the newsroom’s different departments and cover topics such as business, politics and sports.

This summer will be the first since 2019 — before the pandemic — that interns will be able to work alongside staff in person at the newsroom’s offices on Bonanza Road.

“We’re proud to welcome such an accomplished class of interns to the Review-Journal,” Executive Editor Glenn Cook said. “They’ll make a big difference in our coverage of the community in the coming months.”

A native of Portland, Oregon, and a recent graduate of Ohio University with a master’s in photojournalism, Steel Brooks joins the photo desk this summer.

Brooks has worked as a staff photographer at the Gillette News Record in Wyoming and recently completed his master’s photo thesis chronicling a young girl with a severe seizure disorder working with equine therapy.

Brooks also has worked as a freelance photographer and in video production. He is returning to journalism to capture the stories and experiences of everyday people.

“That’s something that really drew me to journalism from the beginning, was just being able to walk out the door and talk to the community about what’s going on,” he said.

A junior at the University of Nevada, Reno, Emerson Drewes joins the the business desk this summer. Drewes is a Las Vegas native and Bishop Gorman High School alum who currently serves as the editor-in-chief of UNR’s student newspaper, The Nevada Sagebrush.

She’s reported on COVID-19 and student government at the Sagebrush and hopes to learn more about the way money changes hands — and the people behind those decisions — as part of the business team.

“I like being involved in my community and getting to know people,” Drewes said. “I like the challenge of getting information.”

Lane previously interned for The Arizona Republic as a digital production intern and has also covered sustainability and climate change for her student newspaper, The State Press. She hopes to find new ways to reach people in Las Vegas who need the news.

“When I worked for the Republic, I was learning about places I had never been to, I didn’t know about,” she said. “Now I get to write and read about places that I have been to in a community that I grew up in.”

A recent UNLV graduate with a bachelor’s degree in journalism, Glivell Piloto joined the Review-Journal in January.

A Las Vegas native and Mojave High School alum, Piloto was a staff writer for the university’s student newspaper, the Scarlet & Gray Free Press, where she wrote features and columns concerning culture and identity.

At the Review-Journal, Piloto helps with headlines and getting stories ready to post online. This summer she hopes to continue learning new skills and expanding her journalism portfolio.

“I love to write. I want to write stories, I want to interview people,” Piloto said. “I’m hoping to create a strong voice.”

A Cincinnati native and senior at Syracuse University, Nick Robertson joins the politics team this summer.

Robertson previously interned for the St. Louis Post-Dispatch, covering crime and local news. He also has covered politics and Syracuse’s underground music scene for his student newspaper, The Daily Orange. He hopes to gain more experience covering high-profile races during his time with the politics team.

“When I was looking for somewhere to work, I wanted something different. I wanted to expand my horizons,” Robertson said. “There’s nothing more different than Las Vegas. … You can get a lot of really good experience around some really experienced people.”

Jimmy Romo, another Las Vegas native, joined the Review-Journal in February as a news reporting intern. He later moved to the RJ’s sister newspaper, the Pahrump Valley Times, where he will continue his internship through the summer.

Romo is a UNLV student on track to graduate next spring with a degree in biology and a minor in journalism. He’s also a graduate of the pre-nursing program at Nevada State College.

In addition to his work at the Review-Journal, Romo has worked as a staff writer and editor for UNLV’s student newspaper, the Scarlet & Gray.

“I hope through this experience I expand my journalistic coverage into more in-depth topics, especially in the sciences,” Romo said. “I’ve had the opportunity to fly over the Amargosa desert to see the risk factors to the underground river and the endangered species and report on it. There is more to come.”

A graduate student at the Missouri School of Journalism at the University of Missouri in Columbia, Teghan Simonton joins the investigative team this summer.

Simonton, whose hometown is Maynard, Arkansas, has worked as a data intern on USA Today’s investigative team and at the Pittsburgh Tribune-Review, where she covered the pandemic response and local issues like a lack of ambulance services in small towns and communities.

She plans to use the investigative skills she has cultivated to help shine a light on issues in Las Vegas.

“From what I’ve learned so far, it’s a really fascinating community,” she said. “The projects that the I-team is working on are exciting and heavy-hitting pieces that I’m really honored to be able to help with.”

Maria Staubs knew she was interested in journalism when she first read the morning announcements at Cadwallader Middle School in northwest Las Vegas. An Arbor View High School alum, Staubs is a junior at ASU’s Walter Cronkite School who joins the features team this summer.

Staubs has written for her school’s online publication, the Downtown Devil, including a story that profiled a local muralist who used art to recover after being released from prison. This is her first news reporting internship, and Staubs hopes to use the experience at her hometown paper to pursue a career in entertainment reporting.

“My grandma reads the paper every morning,” Staubs said. “I’m just really looking forward to tying pop culture to Vegas and tying entertainment stories to what’s going on in Vegas.”

A Las Vegas native and Desert Pines High School alum, Alex Wright started at the Review-Journal in January on the sports desk and will continue his internship through this summer.

Wright is a senior at UNLV and the outgoing editor-in-chief of the university’s student newspaper, the Scarlet & Gray. This is his first news internship, following a stint with the communications department at UNLV athletics.

Wright describes a story that he pitched and reported on this year about UNLV’s hockey program as a “full circle” moment for him, as his first assignment at the Scarlet & Gray also centered around UNLV hockey.

“I’ve gotten a lot out of it, and I’m hopeful to learn some more and get a little bit more experience as this summer goes on,” he said of his internship.