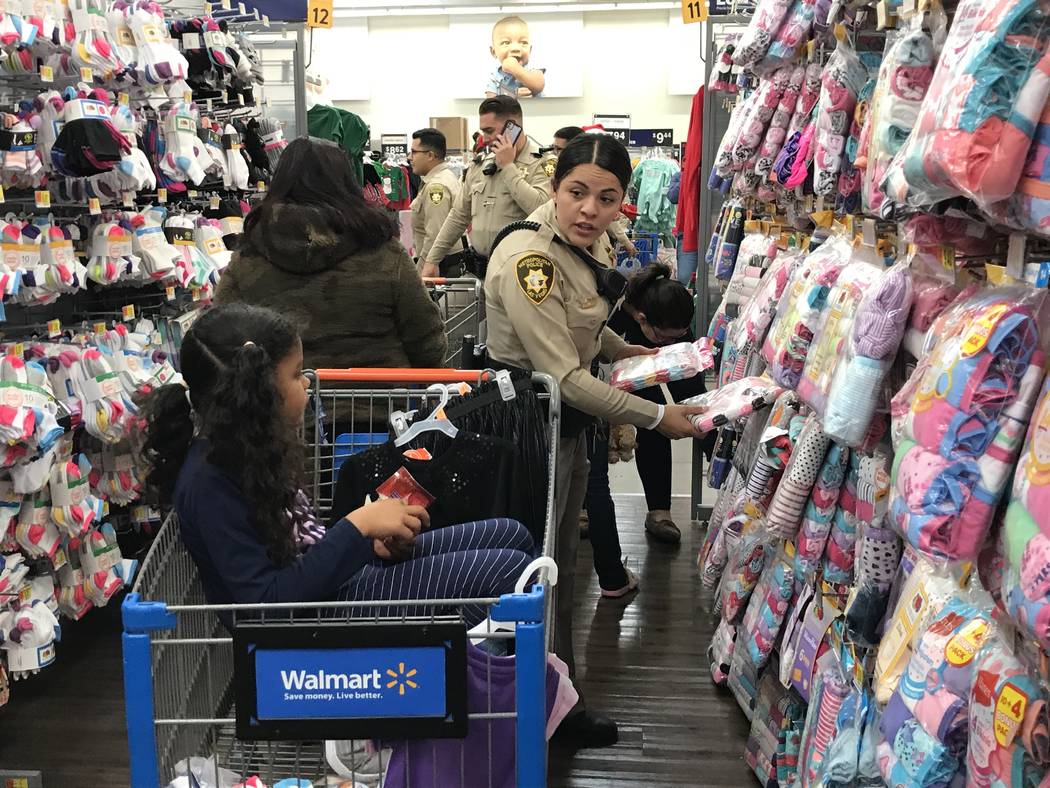 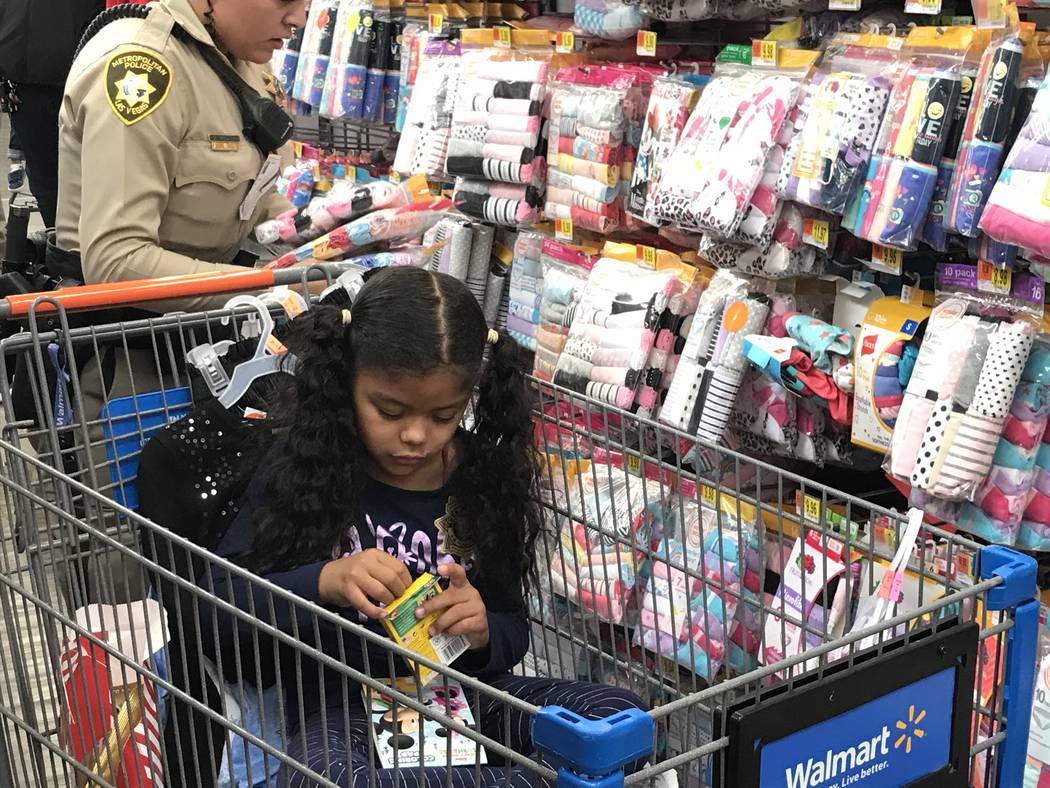 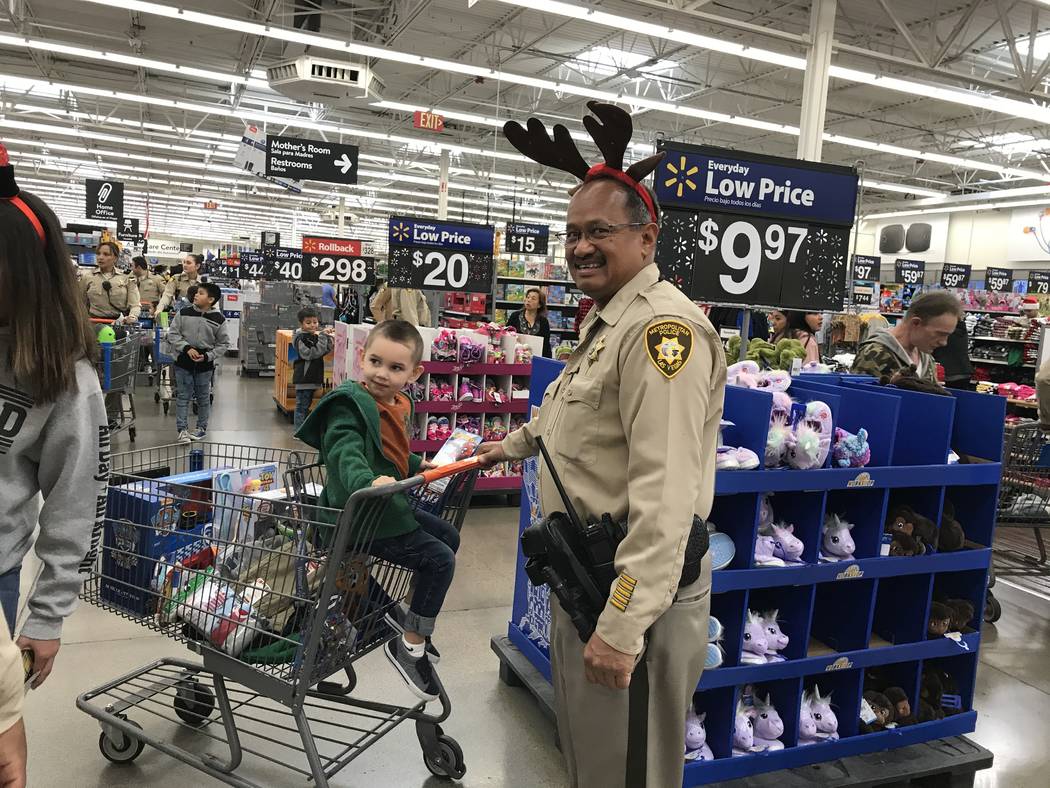 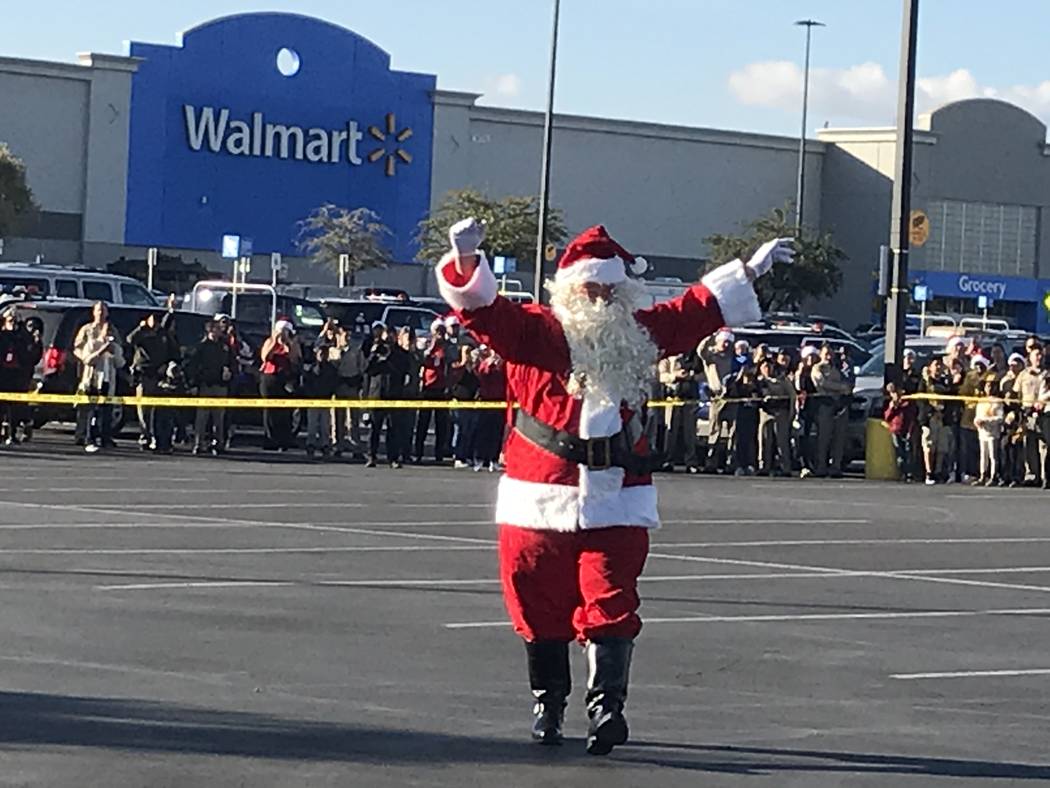 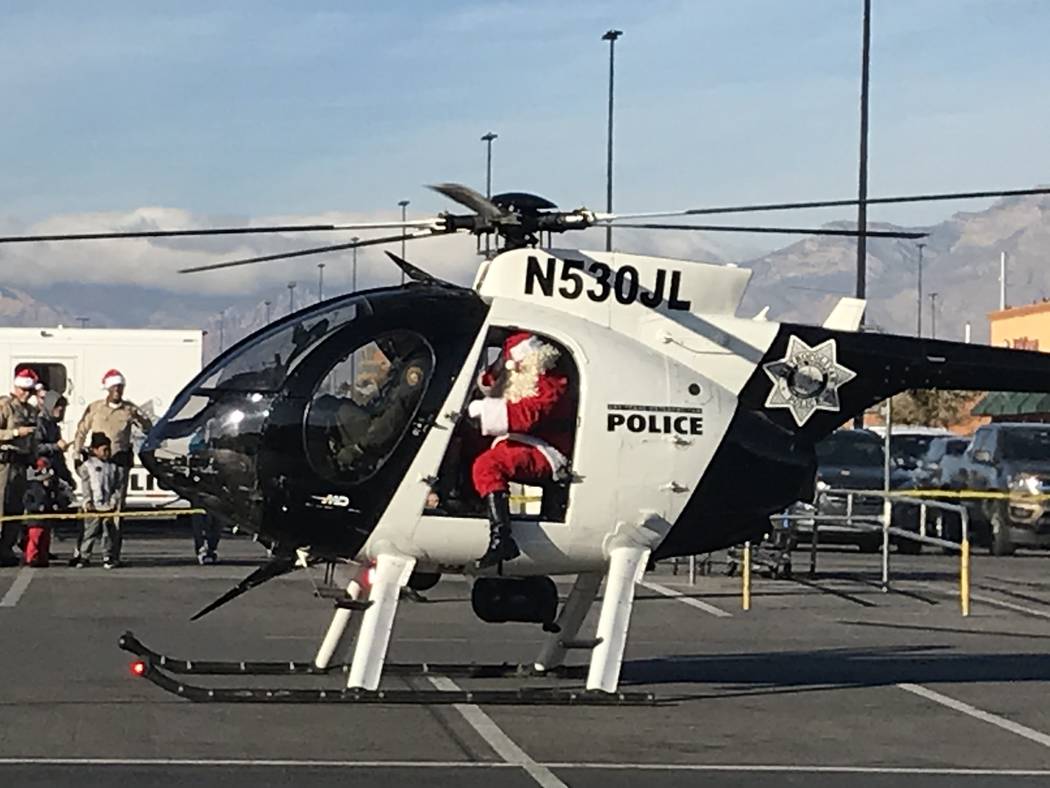 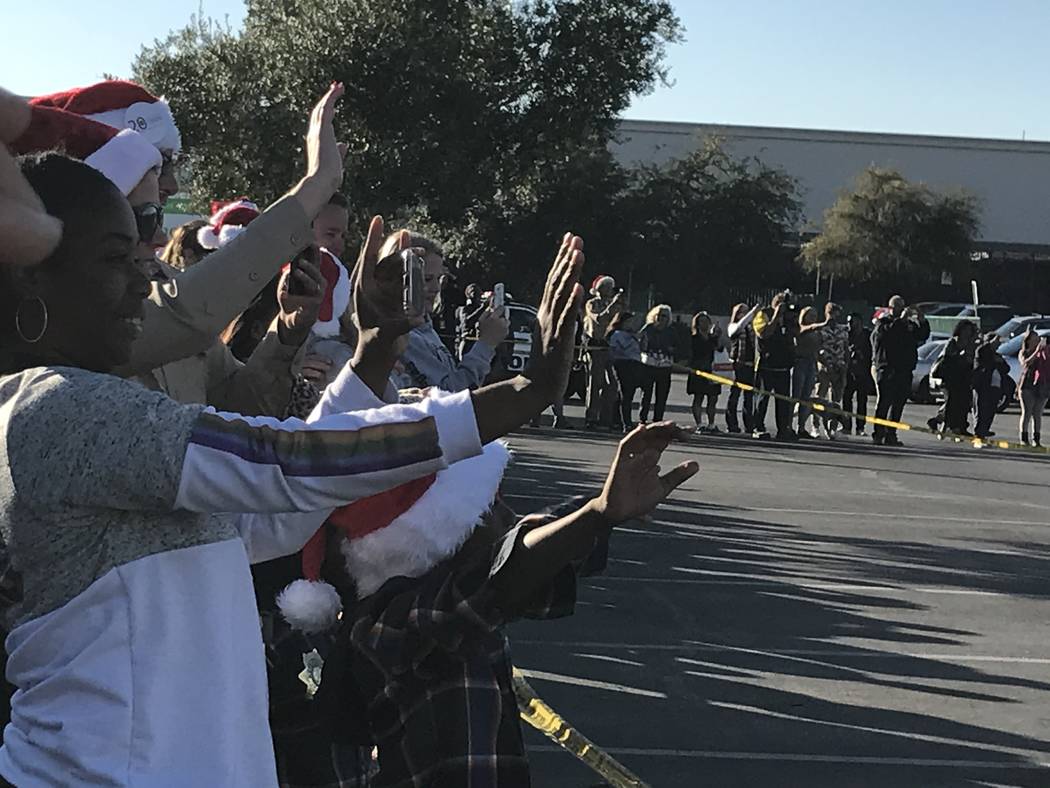 Children and their families wave to Santa Claus during a "Santa Cops" event on Saturday, Dec. 14, 2019, at Walmart on West Charleston Boulevard in Las Vegas. (Julie Wootton-Greener/Las Vegas Review-Journal) 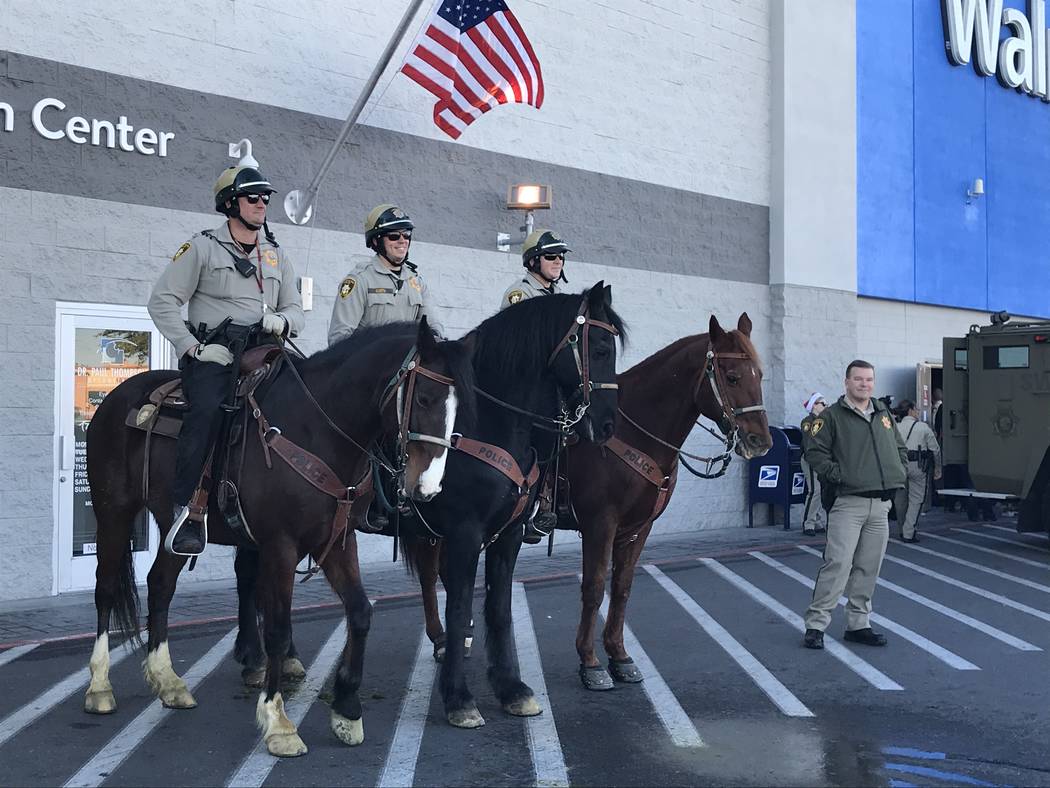 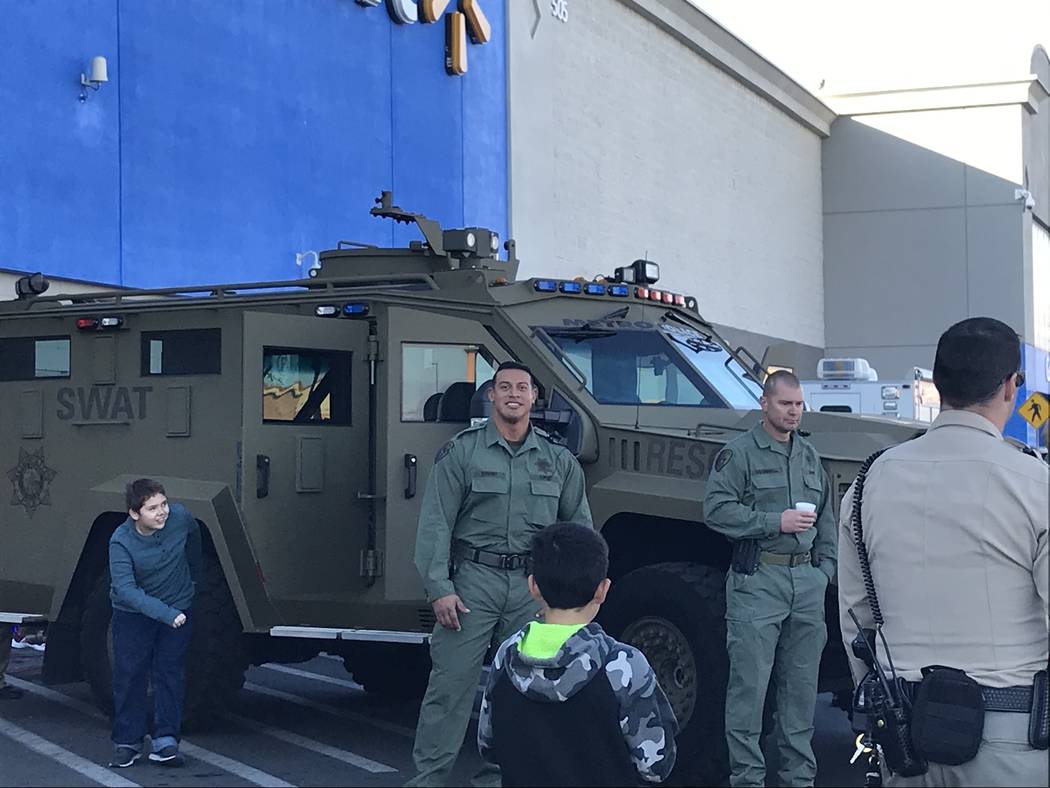 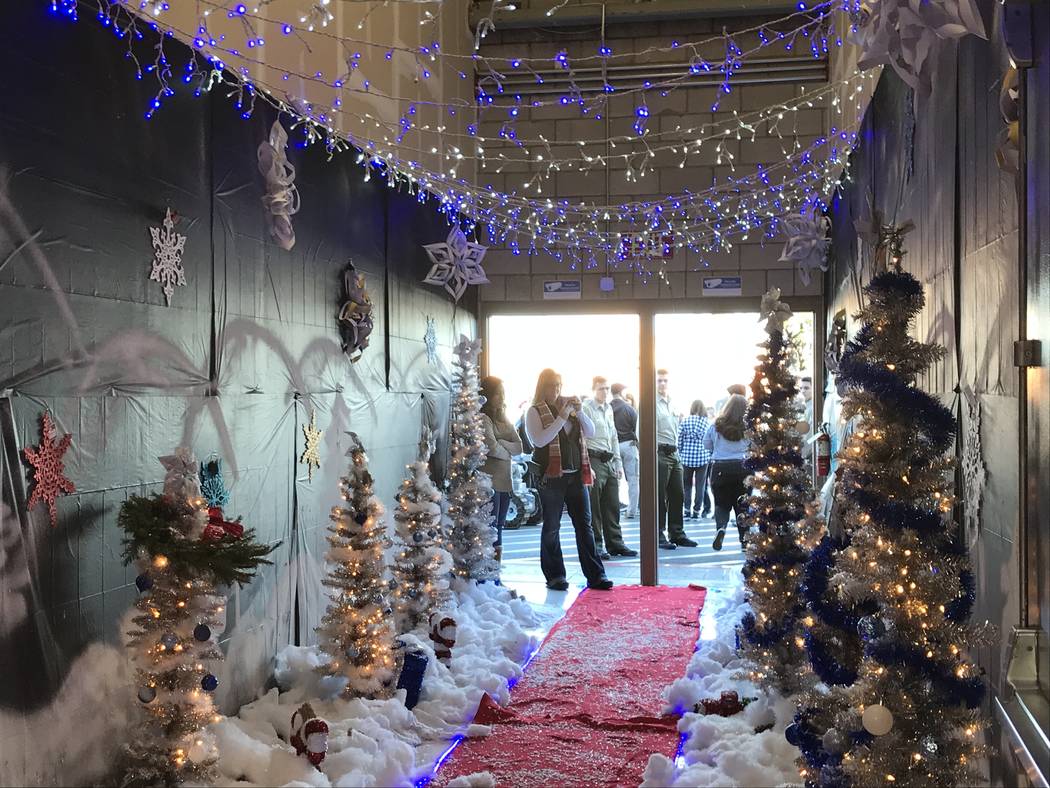 The entryway to Walmart is decorated during a "Santa Cops" event on Saturday, Dec. 14, 2019, at the store on West Charleston Boulevard in Las Vegas. (Julie Wootton-Greener/Las Vegas Review-Journal) 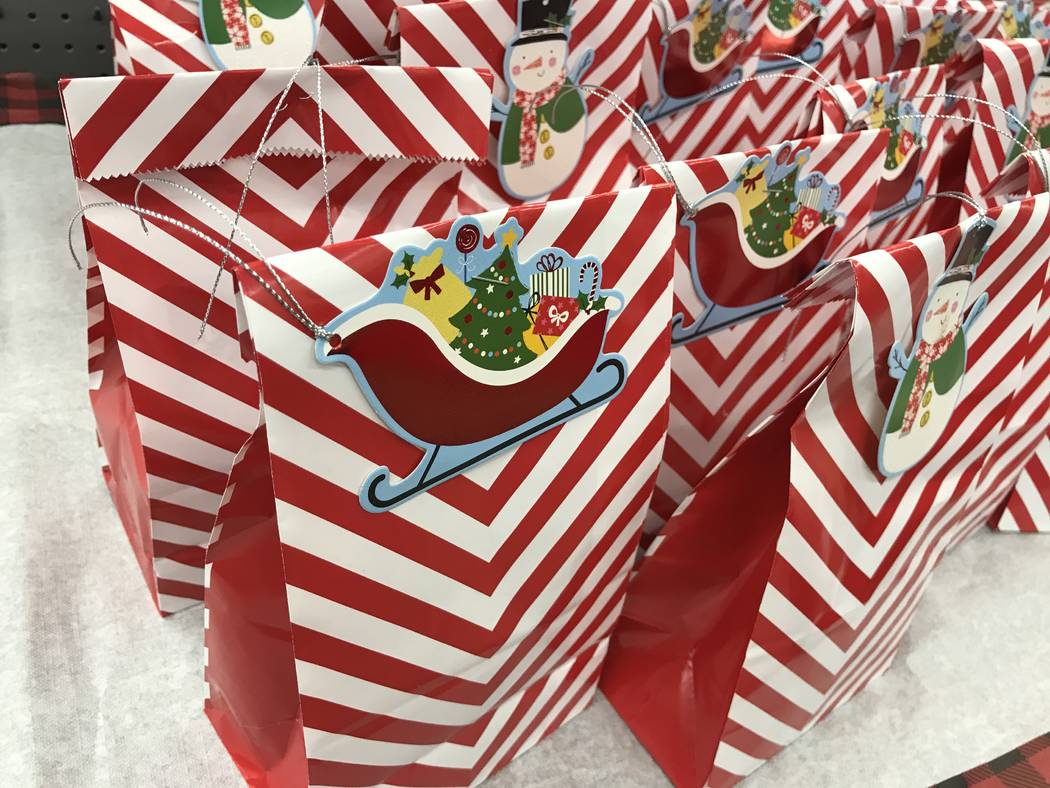 Goodie bags for children are on display during a "Santa Cops" event on Saturday, Dec. 14, 2019, at Walmart on West Charleston Boulevard in Las Vegas. (Julie Wootton-Greener/Las Vegas Review-Journal)

The options were overwhelming for 6-year-old Cathalina Correa while picking out underwear at Walmart.

Metropolitan Police Department officer Alexis Hodler showed Cathalina — who was sitting in a shopping cart — a pack of underwear with printed characters from the Disney movie “Moana.”

“Do you like these ones?” Hodler asked Cathalina, whose hair was pulled back into three small pigtails.

“This one and the ‘Frozen’ ones,” said Cathalina, who was looking through a goodie bag full of snacks and a coloring book. She told Hodler: “I’m going to start coloring now.”

Cathalina was among more than 130 children who participated Saturday in the Metropolitan Police Department’s annual Santa Cops event at Walmart at 4505 W. Charleston Blvd.

Children were paired with officers to shop for toys, and basic necessities such as clothing and shoes.

A goal for Las Vegas police was to provide an opportunity for positive interactions between the children and officers.

“A lot of people come into contact with police under not very good circumstances,” Metro spokesman Larry Hadfield said. The Santa Cops event, he said, is a chance for police to reach out to the community during the holidays and give back.

Each child had $150 to spend during the event. The money was raised by the nonprofit Las Vegas Metropolitan Police Department Foundation.

The event benefited children from disadvantaged families; those who are ill and whose families are struggling with medical bills; those from Child Haven, Clark County’s emergency shelter for abused and neglected children; and those who’ve been victims of crime.

Participating children were nominated by officers, Hatfield said. There are a lot of “younger kids,” he said, but some are 12 or 13 years old.

More than 200 Metro employees volunteered their time to participate in the longtime holiday tradition.

Before the event, children and Metro employees gathered in an area of the Walmart parking lot that was sectioned off using yellow caution tape.

They watched as Santa Claus arrived in a police helicopter. SWAT and K-9 units, and mounted police also were present at the event.

Children and officers entered the store through an indoor hallway decorated with a red carpet, fake snow, lights, and decorated artificial trees and snowmen.

Inside the store, Metro officer Amy Wyatt — who works in community-oriented policing — was shopping with an 8-year-old girl. They had found jeans and a hair bow, and were working on picking out shirts.

Officer Ed Serrano pushed 3-year-old Justus around in a shopping cart, which was full of PAW Patrol toys.

Near the boys clothing section, Serrano and a few other Metro employees encountered a traffic jam of shopping carts trying to navigate a narrow aisle. It’s all part of the holiday shopping experience.