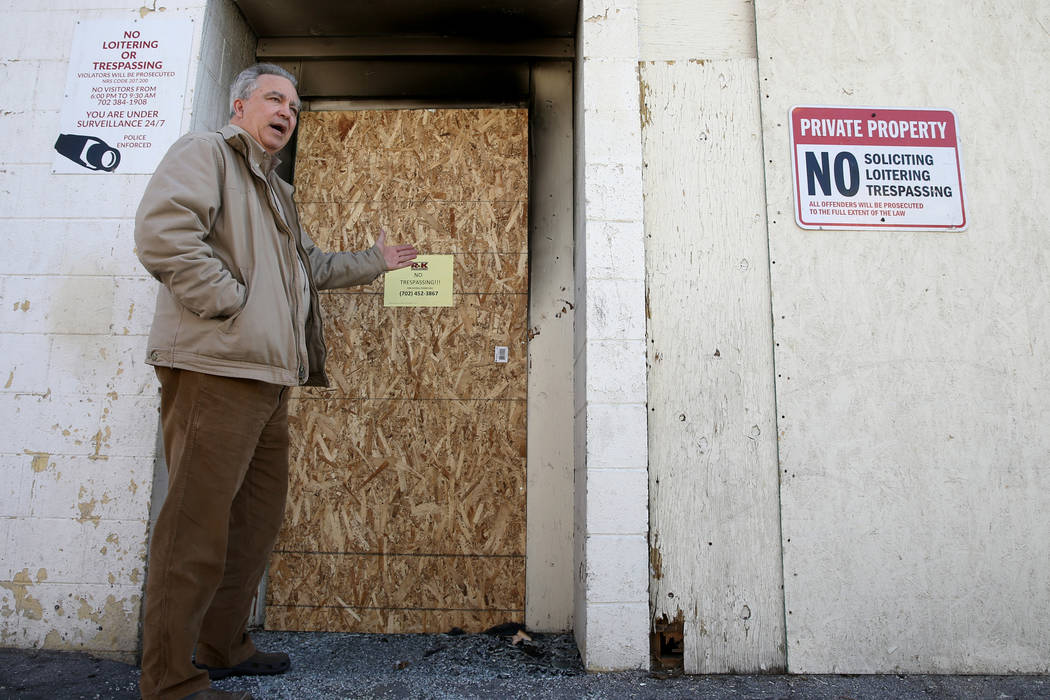 Donald Walford talks to a reporter at the Alpine Motel Apartments in downtown Las Vegas on Monday, Dec. 30, 2019, following a fatal fire at the building on Dec. 21. Walford snapped a photo of the bolted back door of the building on Oct. 8. He said the door was no longer bolted when he checked back days later. (K.M. Cannon/Las Vegas Review-Journal) @KMCannonPhoto 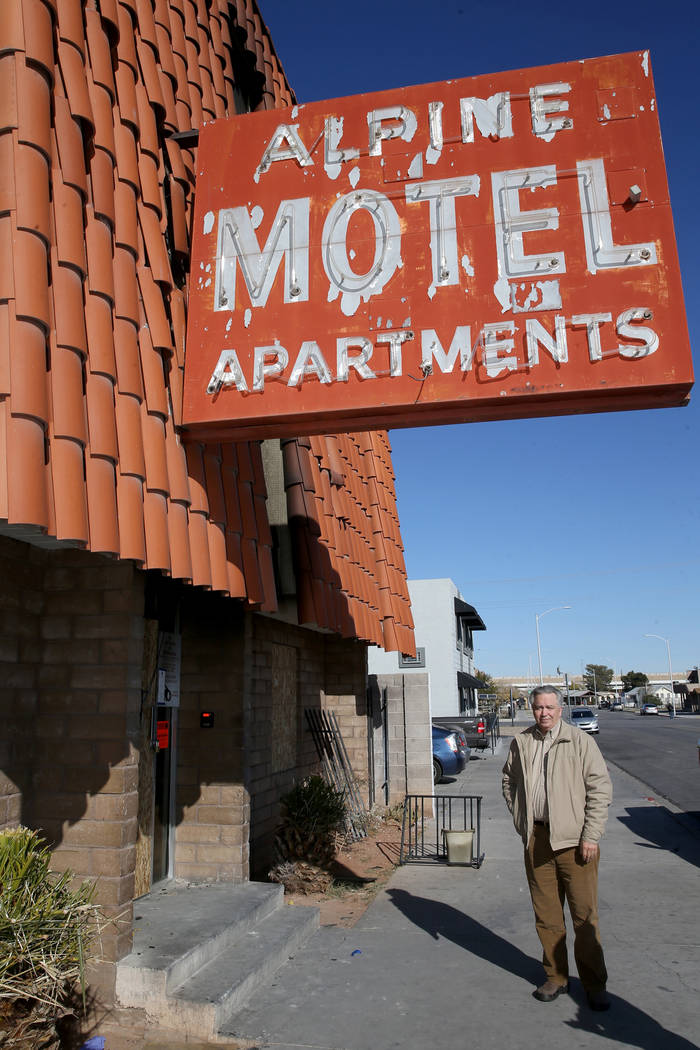 Donald Walford talks to a reporter at the Alpine Motel Apartments in downtown Las Vegas on Monday, Dec. 30, 2019, following a fatal fire at the apartment building on Dec. 21. Walford snapped a photo of the bolted back door at the building on Oct. 8. He said the door was no longer bolted when he checked back days later. (K.M. Cannon/Las Vegas Review-Journal) @KMCannonPhoto 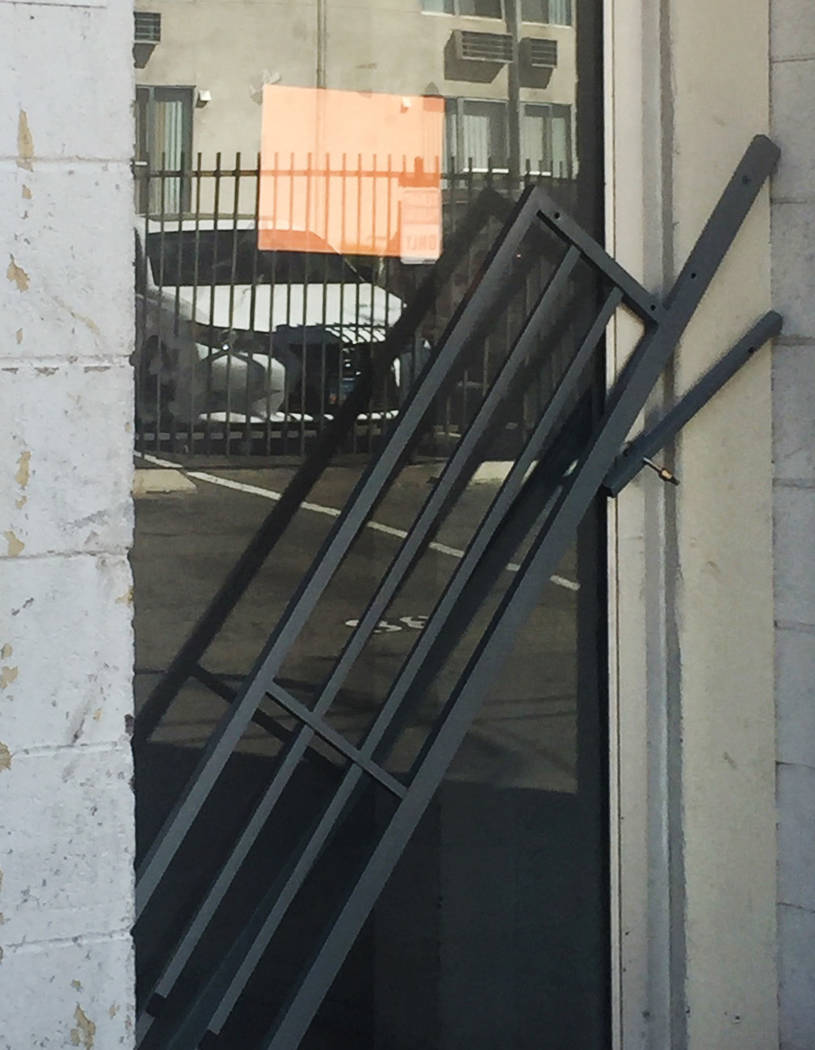 A photo shows the rear exit door of the Alpine Motel Apartments barred shut more than two months before a fire that killed six at the property.

The blaze swept through the downtown motel at 4:13 a.m. on Dec. 21. Survivors said a rear exit door of the motel was barred shut, trapping people inside the burning building.

Las Vegas businessman Donald Walford said a group of downtown Las Vegas residents concerned about crime, code violations and quality of life in the downtown corridor documented the existence of the barricaded door because they thought it was a potential fire hazard. The group is informally known as the “God Squad.”

“One of our group members, a resident, she noticed that the door was blocked by metal rails that were bolted to the door,” Walford said.

Walford went to the Alpine on Oct. 8 and took a photo showing black metal bars over the exterior of the exit door.

“I went through the alley, confirmed it, took a picture with my cellphone,” said Walford, who shared his photo with the Las Vegas Review-Journal on Monday.

Walford said the photo then was forwarded to an employee of the city of Las Vegas whom he declined to identify. About two days later, Walford returned to the alley and found that the bars had been removed.

But sometime later, the bars were reinstalled. Witnesses recounted victims trying to kick open the rear exit door during the fire, only to find it barred.

One witness, Jeremy Gordon, said the body of his aunt, Mikell, was found just a few steps from the rear exit. Another resident, Floyd Guenther, said Bennett, who died trying to save others, was trying to kick open the rear exit door but couldn’t.

“The back door to the apartment complex was bolted shut, locked up. Couldn’t get out of it,” Guenther said.

Walford said that when he heard about the fire at the Alpine on the morning of Dec. 21, he rushed to the scene and tracked down a Las Vegas Fire Department investigator.

“I heard about the fire that happened that night, and I came down here to talk with a fire investigator to show him what I had seen weeks before,” Walford said.

Las Vegas attorney Chris Anthony said previously that he represents the ownership of the Alpine Motel Apartments. Anthony did not respond to a request for comment. Adolfo Orozco is the owner of the property. Attempts to reach Orozco since the fire have been unsuccessful.

A criminal investigation into the Alpine fire by the Las Vegas police homicide detail is ongoing. Clark County District Attorney Steve Wolfson said previously that one component of the investigation is focused on “communication between this property and code enforcement.”

City of Las Vegas spokesman Jace Radke, when contacted regarding this story, said in an email that “the Alpine fire remains under investigation, and the city does not have further comment on details regarding the fire at this time.”

Radke also noted, though, that city Fire Marshal Robert Nolan had previously confirmed publicly that there were “code enforcement cases at the location, but all of those cases had been resolved.”

The God Squad regularly holds monthly meetings, open to the public, at which its members discuss their concerns. In the past, Las Vegas police and city employees have attended.

Members of the God Squad also regularly send emails to police, the city and anyone else they believe can help them address the problems.

These emails, provided to the newspaper by downtown advocate Steve Smith, show several complaints referencing the Alpine dating back to 2016.

In a July 2017 email sent to police, Smith wrote, “I understand there was gunfire over the weekend in the alley behind the Alpine. The only business in operation in that block with a door leading to the alley is the Alpine. You make your own conclusions.”

In an email sent to police in October 2016, Smith wrote, “You have what I believe to be another gang wearing blue mixing it up in front of the Alpine. Guns are in the mix so It doesn’t take a rocket scientist to understand it won’t be long until there is violence.”

Smith also sent police an email in May 2016 complaining about the Alpine, and Walsh responded, “I will look into the Alpine’s license. I also had filed complaints with the City and that resulted in an inspection of the property.

“Numerous violations were found and the owners were given time to correct those violations. The follow up I received was that all the violations have been corrected. I was hopeful that fines would be levied but apparently not. I know that the wallet is the way to affect them but that did not occur. This is frustrating for me and my team.”

When reached Monday, Walsh said, “A tragedy of this magnitude is terrible for this community and the families involved. Everybody in the city clearly should be shaken by this event.”

“When I was the captain of the Downtown Area Command, the Alpine Motel was not on our radar for violent calls for service or street level violence,” Walsh added. “It just was not that type of property. There were other things brought to our attention from the community which are better addressed through entities like code enforcement and the Fire Department. We used those resources regularly to conduct the necessary inspections of those properties. Obviously when you compel people to do things because of the idea there is a penalty on the end of it, that can be a motivator.”

In one lengthy email sent by Smith to Vicki Ozuna, code enforcement manager at the city, Smith wrote:

“It is my opinion your complaint driven department needs a revamp. It simply is not working in downtown, especially the East Village. I grew up hearing, ‘if it ain’t broke don’t fix it.’ We think its broke based on our experience the last couple of years,” Smith wrote.

Smith listed Alpine as one of the problem areas and recommended a “coordinated effort” between Ozuna’s department, Metro’s Downtown Area Command and the God Squad.

Ozuna responded, indicating she wanted to meet with Smith.

Records also show that the city did issue complaints against the Alpine. According to city records, it was the subject of at least eight code enforcement complaints from 2016 through 2018.

Twice in early 2016, residents complained about a lack of fire safety equipment, including smoke detectors, smoke alarms and fire extinguishers. The records do not show how the complaints were resolved.