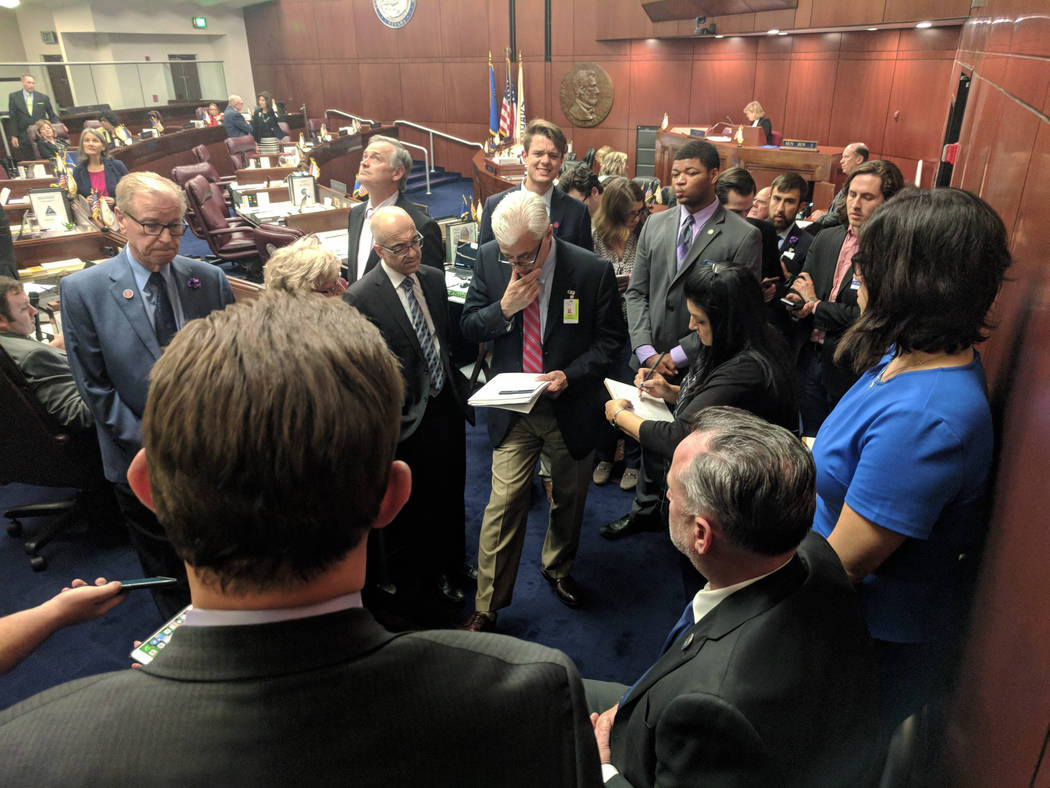 Senators held session till after midnight Sunday and held frequent committee meetings "behind the bar" on the floor during recesses to move legislation forward. June 2, 2019. (Colton Lochhead/Las Vegas Review-Journal)

CARSON CITY – With one day left to the session, legislative Democrats late Sunday moved to amend a key education funding initiative to win Republican support for the measure and avoid a potential legal battle over extending a tax to pay for it.

The amended bill was approved in a Senate committee about 11 p.m. on a 5-3 party-line vote. It immediately moved to the Senate floor.

“We’re trying to work with our colleagues across the aisle,” Senate Majoirty Leader Nicole Cannizzaro said after presenting the bill to the Senate Finance Committee.

In a concession by Democrats, Cannizzaro said the revised measure would advance relying on the two-thirds majority requirement for approval that regularly applies to tax legislation.

“That is something that’s important to (Republicans) and we want to work with them,” Cannizzaro said.

The measure, Senate Bill 551, extends at current rates a business payroll tax set to roll back in July to generate an additional $98 million over the next two years. Because it is an extension and not a brand new tax, Democrats sought and obtained an opinion from legislative lawyers saying the move did not need two-thirds support to pass, which would require Democrats to entice at least one Republican to vote for it in the Senate.

Democrats hold enough seats in the Assembly to pass the bill without Republican support. In pressing their case for extending the tax, they have cast it as a choice between increasing education funding or voting for a “corporate tax break.”

In the budget for the next two years, the revised bill adds nearly $17 million more for school safety and allocates $72 million overall for statewide teacher pay raises – from just $11,400 in tiny Esmeralda County to $53 million in Clark County.

Additionally, in another proffer to Republicans, the revised bill adds $9.5 million to fund Opportunity Scholarships that cover provide private-school tuition aid to low-income students. Another bill this session froze the program at current levels; the additional money means that students now receiving the scholarships can stay in the program.