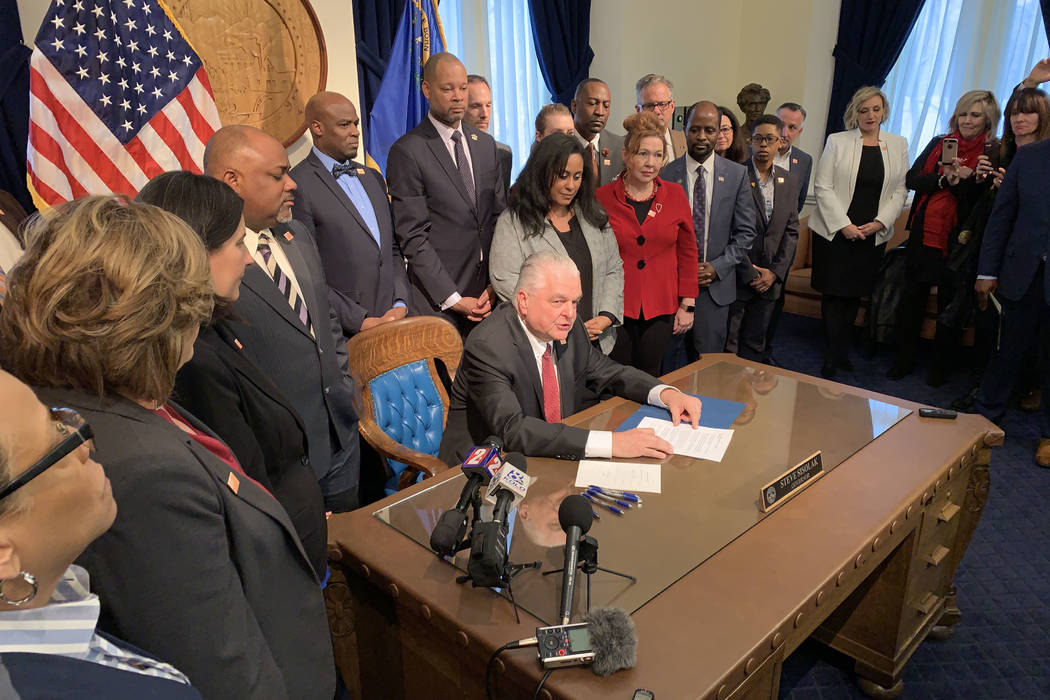 CARSON CITY — With last week’s passage and signing of a bill setting up background checks on private firearms sales, Nevada becomes the 21st state, along with the District of Columbia, to have such a law on its books.

The state actually has had the law since voters approved it in a 2016 initiative, but a fault in its implementation has blocked it from taking effect.

That’s been fixed, although opponents disagree and still think the measure is flawed. Here’s a quick guide to how and why it passed and what happens now:

Why did Nevada pass a new law if private sale background checks were already approved by voters?

Language in the 2016 initiative called on the FBI to conduct the background checks directly, but the FBI balked at carrying out a state-sponsored mandate, and the law could not be implemented. The bill repealed that provision and replaced it with a method of background checks through licensed dealers.

Why did lawmakers do this now?

Largely for symbolic, but meaningful reasons. Leading Democrats, including Gov. Steve Sisolak, campaigned last year on a pledge to fix the problems that blocked implementation of the law. Last week was the one-year anniversary of the school shooting in Parkland, Florida, where 17 people died and 17 more were injured.

Yes and no. Legislation seldom moves from introduction to passage to signing in one week — as this bill did — and Republicans and other opponents complained about it. On the other hand, the intent of the law was decided more than two years ago by the voters. The bill did not break new ground; it fixed a broken law and made it workable. Lawmakers devoted an entire day to testimony on the bill where dozens of people in Carson City and Las Vegas were allowed to speak about it.

When does the law go into effect?

Not until January 2020. The law enacted last week is effectively a repeal and rewrite of the action that voters approved in November 2016. By law, the Legislature can make no changes to initiatives for three years from time of approval, hence the delay in implementation.

What exactly is a private sale?

A sale, also a transfer, where the seller or transferor is not a federally licensed firearms dealer who is required by law to conduct background checks. These could mean people selling weapons online or at gun shows. The latter example is why the federal law exception on private sale background checks is often called the gun-show loophole. A 2015 study that surveyed 1,600 gun owners found that 1 in 5 who bought a gun during the prior two years did so without a background check, and 50 percent who purchased a weapon privately did not.

How will the law work?

Parties involved in a private sale will have to visit a licensed gun dealer, who will run the background check. The law carves out exemptions for certain types of sales or transfers, such as those involving antiques, between family members, or from a trust, as well as for temporary transfers to people legally entitled to have a gun for activities such as hunting or target practice or for use in the presence of the owner.

Opponents in the Nevada debate argued that the term “transfer” is not properly defined in the law and therefore could describe a situation where someone simply leaves a gun behind somewhere, potentially for another’s use. Supporters dismissed that, contending that the legal system was sophisticated enough to determine what constitutes an actual transfer.

What will it cost?

The state does not charge a fee for private sale background checks, which are now voluntary; the bill says dealers can charge a reasonable fee. The current fee for dealer checks is $25. A fiscal note accompanying the bill sees no additional cost to the state if the volume of background checks does not rise dramatically. It notes that in 2018, voluntary private sale background checks comprised 0.2 percent of the nearly 26 million checks conducted nationally. The rate was the same in Nevada, where 215 voluntary private checks have been processed since December 2017 among 98,500 in all — about 14 per month.