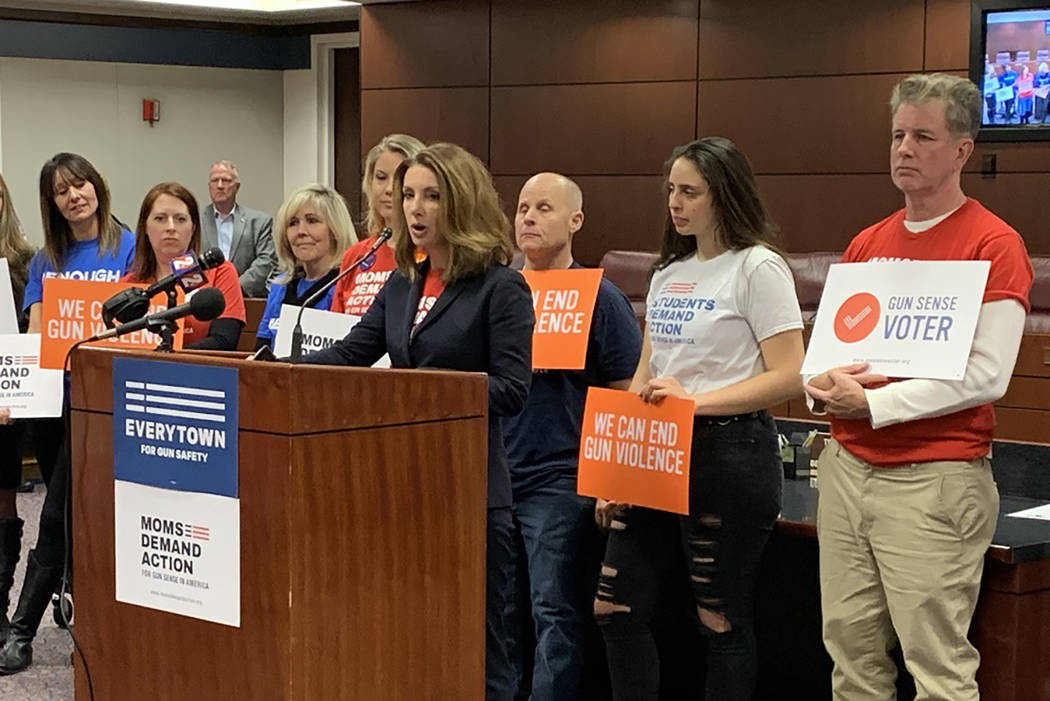 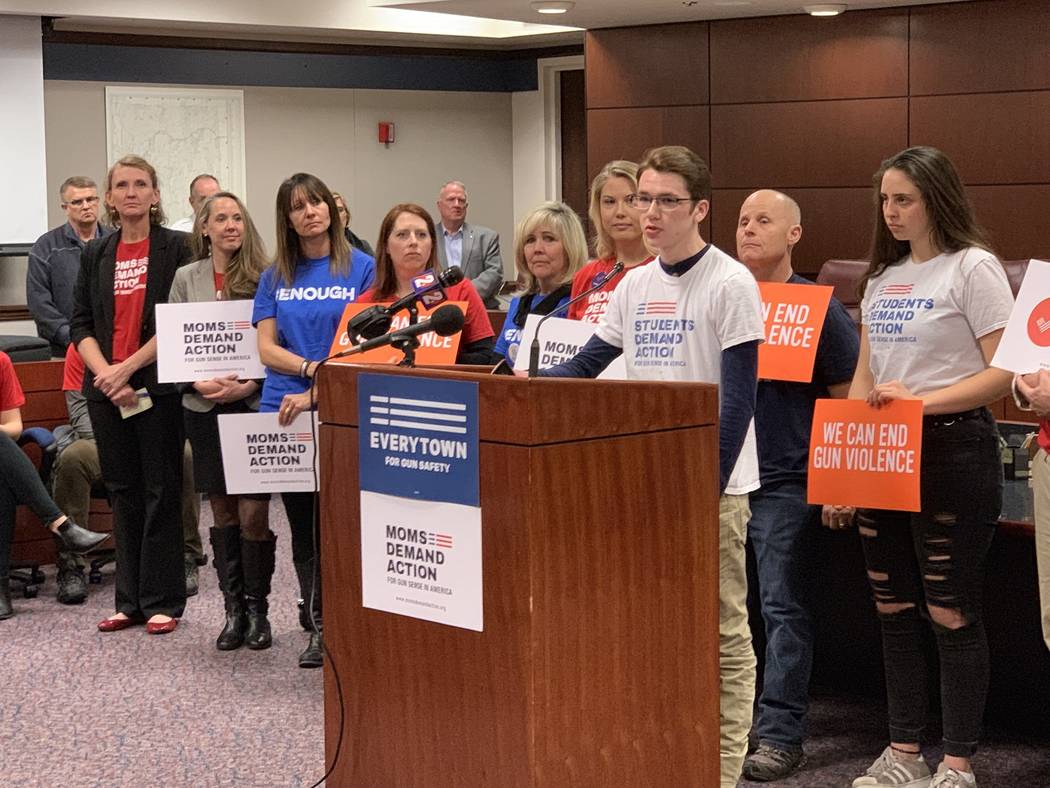 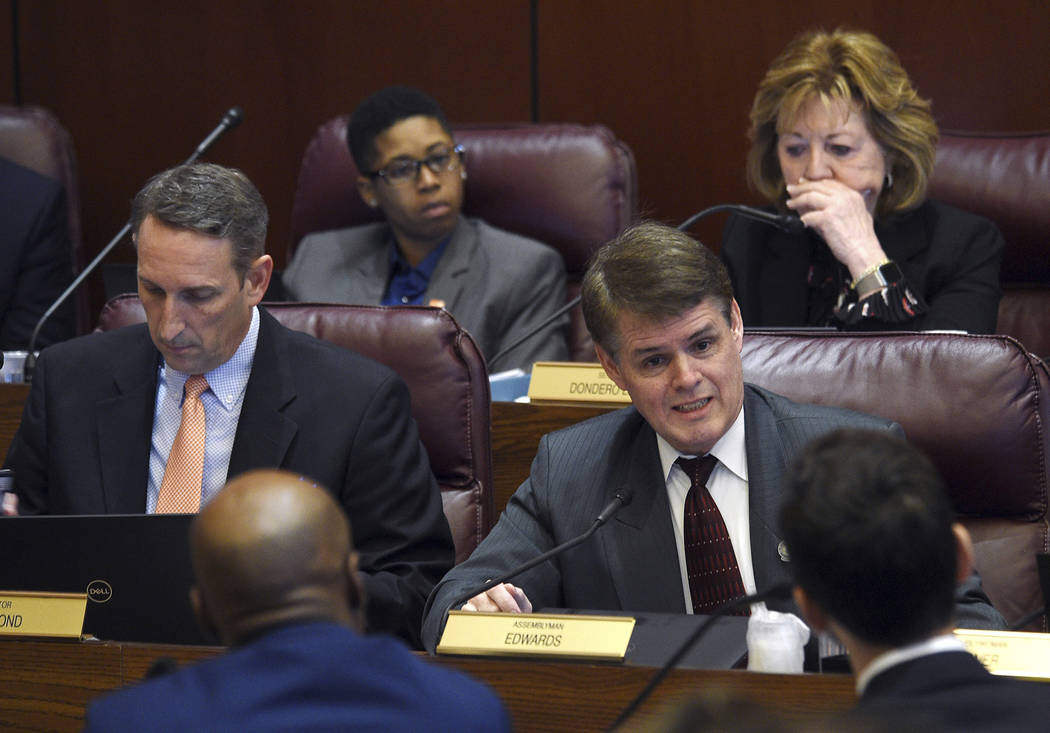 CARSON CITY — A panel of lawmakers on Tuesday approved a bill to implement Nevada’s sidelined background checks initiative, sending it on to the full Legislature for expected votes Wednesday.

The 5-3 party-line vote by the Senate Judiciary Committee shortly after 5 p.m. followed roughly eight hours of testimony that seesawed back and forth among hundreds of supporters and opponents, who chiseled away at one another’s arguments for an entire day, two minutes at a time.

Testimony continued into the late afternoon in hearing rooms in Carson City and Las Vegas before a joint panel of Senate and Assembly lawmakers. The Senate committee then voted to send the bill to the full Senate, which met briefly Tuesday evening to formally put the bill on its Wednesday calendar.

Supportive Democratic majorities in both houses are expected to push through its passage Wednesday.

Supporters testifying Tuesday included Gov. Steve Sisolak and Attorney General Aaron Ford, both of whom ran for office on pledges to fulfill the intent of the 2016 voter initiative that approved private gun sale background checks but faltered on the practical details of conducting them.

The measure before legislators aims to correct that deficiency, doing away with the initiative’s overreaching effort to require FBI background checks and entrusting the responsibility instead to state law enforcement.

“This bill is a priority for me, and I look forward to signing it when it is brought to my desk,” the governor told the joint panel of Assembly and Senate lawmakers hearing the bill.

But what bill opponents might have lacked in star power Tuesday they handily made up for in volume, widely outnumbering supporters. With little doubt existing on the bill’s eventual outcome, opponents — and supporters as well — used the occasion to debate broader, polarizing issues around gun control, Second Amendment protections and where the two might find balance.

Many of the opponents sought to relitigate the outcome of the 2016 referendum, noting that 16 of 17 counties in the state defeated it, often by wide margins. It passed with just over 50 percent of the vote on the strength of a nearly 100,000-vote majority in Clark County.

“The whole idea of all these people signing up and coming out here is to have their voice heard,” Assembly Minority Leader Jim Wheeler, R-Gardnerville, said in the afternoon. “We have 16 of the counties that voted drastically against this, and you’re hearing from those people now.”

Opening testimony shortly after 8 a.m., Senate Majority Leader Kelvin Atkinson, D-North Las Vegas, reviewed the history of efforts to enact private sale background checks in the state beginning with a 2013 bill that then-Gov. Brian Sandoval vetoed. Neither that bill nor the later successful initiative affect law-abiding gun owners or encroach on Second Amendment rights, Atkinson said, noting that licensed gun dealers who would conduct the background checks are plentiful across the state.

There are communities, he said, where residents “have to go a few more miles” to get groceries. If somebody has to go to the same effort to reach a licensed gun dealer for a background check, he continued, “then so be it.”

Opponents said the bill’s lack of specific definitions on what constitutes the transfer of a weapon could criminalize routine and typically lawful behaviors, such as lending a weapon for target practice or temporarily leaving it in a home or car. The bill lists many exemptions for temporary transfers.

“I’m not home, but my gun is,” Las Vegas resident Vernon Brooks told the panel. “The babysitter, house sitter, fish feeder and Amazon delivery guy come in. I’ve just transferred my gun to them.”

Assemblyman Chris Edwards, R-Las Vegas, a retired Navy commander, said the bill “totally missed a lot of concerns about active duty and reserve personnel” who leave weapons with a spouse or roommate when they deploy.

More ardent opponents called the measure an incipient effort to register all guns or restrict legal gun ownership or, in the words of one commenter, a “veiled attempt to confiscate guns.”

Commenters, all limited to two minutes to accommodate the overflow crowd, included victims of gun violence as well as survivors of the Oct. 1, 2017, mass shooting at the Route 91 country music festival in Las Vegas. Assemblywoman Sandra Jauregui, a festival attendee, described still-vivid memories of hitting the ground and having her husband crawl on top of her to shield her.

Outside the hearing room, at a rally attended by bill supporters and gun control advocates, Shannon Watts, founder of Moms Demand Action for Gun Sense in America, told those assembled that they “have become the strongest opposition the gun lobby has ever seen.”

“Through your votes and your activism, you are changing the tide in Nevada and making sure that your newly elected state leaders are gun sense champions who will put your interests first,” she said.