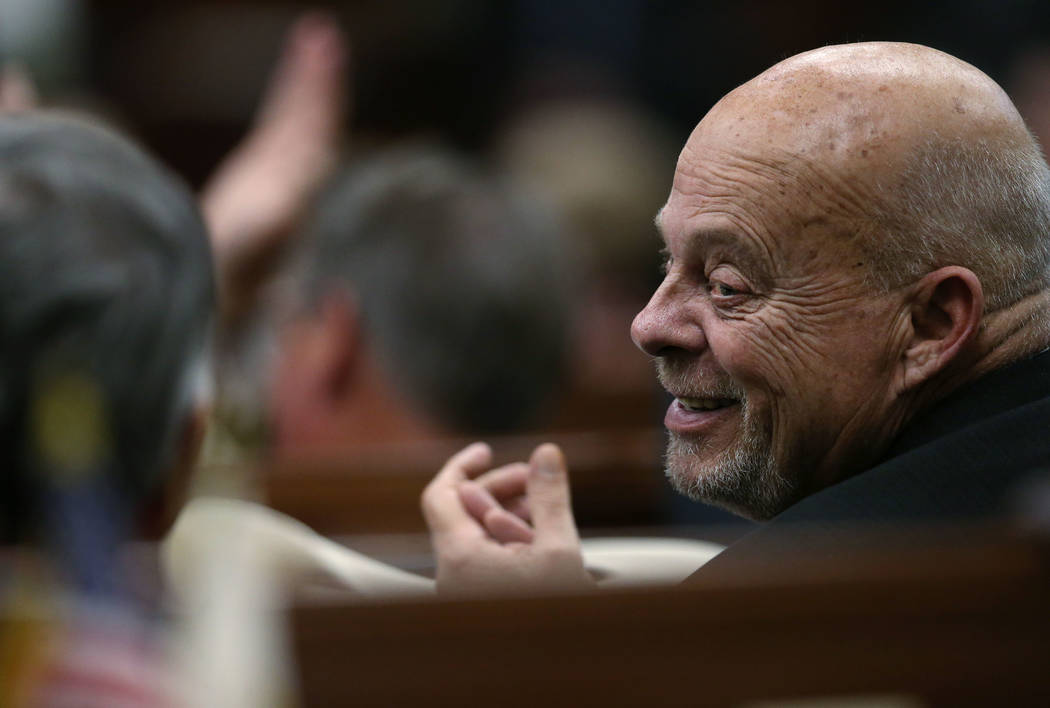 Nevada Assemblyman Jim Wheeler, R-Gardnerville, applauds as Gov. Steve Sisolak gives a shout-out to the Golden Knights during his State of the State address in Carson City on Jan. 16, 2019. (Cathleen Allison/Las Vegas Review-Journal)

CARSON CITY – Nevada Assembly Republicans have 115 bills in the works this session in five priority areas they outlined for reporters Thursday.

The 13-member caucus is outnumbered by Assembly Democrats more than 2-1 but is counting on pledges of bipartisanship and cross-the-aisle alliances to get action on their bills.

“Even though we are in a superminority here, we still represent somewhere between 800,000 and 1 million people,” Assembly Minority Leader Jim Wheeler, R-Gardnerville, told reporters. “We want to make sure their voices are heard, too.”

Other lawmakers went into greater detail on each of the five priority areas.

Among bills they highlighted, some with bipartisan sponsorship or still in draft form, are measures to reduce a secondary sales tax on guns purchased out of state; end the statute of limitations on sexual assault cases where DNA evidence is present; and encourage employers to provide work-based learning opportunities for students.

Wheeler said it was still too early, in the session’s fourth week, to gauge whether pre-session pledges of cooperation and less partisanship were holding. Only a couple pieces of legislation have thus far made it to the floor of both houses for votes.

“I’m not going to say there’s no cooperation because there’s nothing to cooperate on yet,” he said. “We’re looking forward to having these discussions and having some input. I think we will.”