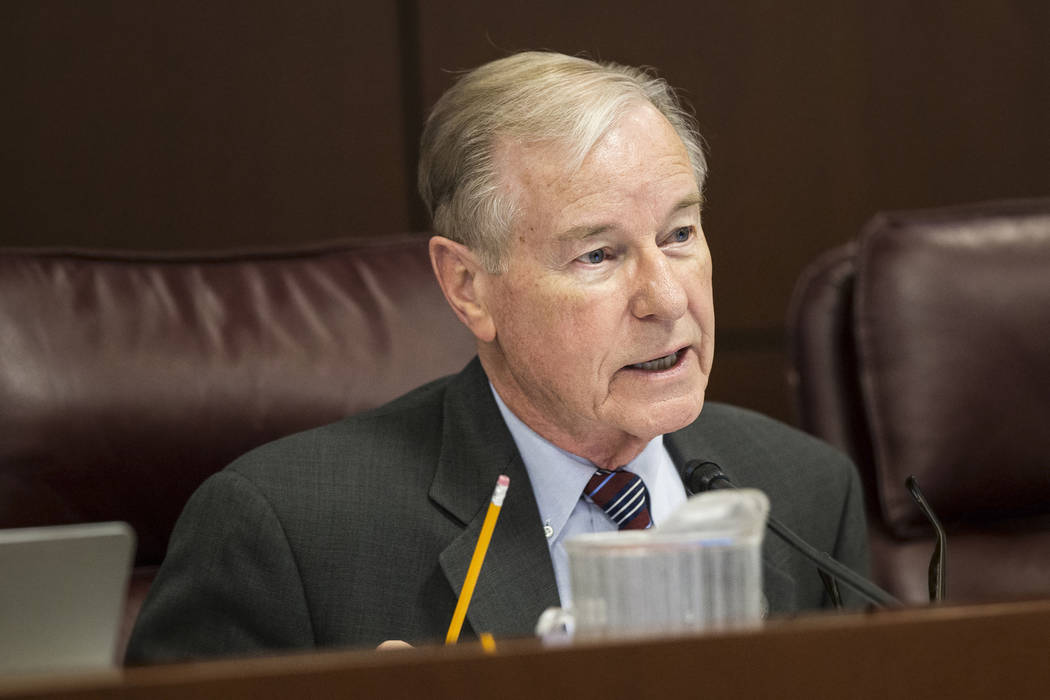 “I’m confident that we’ll get the bill passed,” said Sen. David Parks, D-Las Vegas, whose bill, Senate Bill 165, has 16 co-sponsors. The same bill passed the Senate in 2017 but died without a vote in the Assembly, a defeat Parks attributed to running out of time.

“I think I could have gotten the bill passed if we had had, perhaps, an extra week,” Parks said prior to Monday’s hearing. “There were one or two individuals who weren’t really quite sold on it. I think we’ll see that this time around they’ll be more supportive.”

The measure would permit physicians to prescribe lethal medication to state residents who have been deemed competent, are at least 18 years old, have a terminal condition diagnosed by two doctors, have made both spoken and written requests to die and can self-administer the drugs. Two people would have to serve as witnesses, one of them not a relative or recipient of any death benefit.

The polarizing issue drew a large crowd to the Senate Committee on Health and Human Services, even though no vote by the committee was planned. Opponents, including two Republican senators on the committee, said they had concerns about potential abuses or coercion, the possibility for mistaken diagnoses and a lack of safeguards.

Supporters, responding to those concerns, showed how they were addressed in the bill and cited practices in other states going back 20 years.

Behind specifics of the bill, debate seesawed between arguments about letting the end-of-life process follow its natural course, with palliative care where necessary, versus an individual’s right when faced with a terminal diagnosis to forgo the last, worst stages of an illness.

“A terminally ill individual that applies for this option is not deciding between living and dying,” said Dan Diaz, whose terminally ill wife, Brittany Maynard, ended her life in 2014. “This is not a right-to-life or right-to-choose issue. The option of living (was) no longer on the table for Brittany.”

Kristen Hanson, whose husband, J.J., died of a brain tumor in 2017 and who now works to to oppose so-called death with dignity laws, said her husband outlived his terminal diagnosis by more than three years, enough time to father a second son.

“If assisted suicide had been legal at the time he was diagnosed, he may have not had that time,” she said.

Both sides cited data from Oregon, the first state where doctor-assisted suicide was legalized, via a ballot measure in 1994. The law did not take effect until 1997 because of legal challenges. California, Colorado, Vermont, Washington, Hawaii and the District of Columbia subsequently passed laws authorizing assisted suicide. It is permitted in Montana by court ruling.

The Oregon law requires health officials to collect data on patients who choose to end their lives and publish a report annually. Oregon’s 2018 data show prescriptions have been written for 2,217 people since 1997, and 1,459 people have died from taking lethal drugs. In 2018, 249 prescriptions were written. Of those, 158 patients died from taking the drugs, 48 did not take the medication and died of other causes, 29 were alive and 14 died but the state did not know the cause.

In Washington, where physician-assisted suicide was made legal in 2009, 1,401 prescriptions have been written, and 1,364 people had ended their lives via the legal means through 2017, according to that state’s most recent report.

Committee member Sen. Scott Hammond, R-Las Vegas, in posing a lengthy series of questions about the bill, noted that Nevada has only a 30-day residency requirement and asked whether people might move to the state in the interest of “suicide tourism” to end their lives.

Parks said the bill could be amended to address that.

“It’s an issue of personal choice,” he said in wrapping up testimony after dozens of people spoke. “This is an issue of compassion … of people that just want to have control of the last few months and moments of their life.”