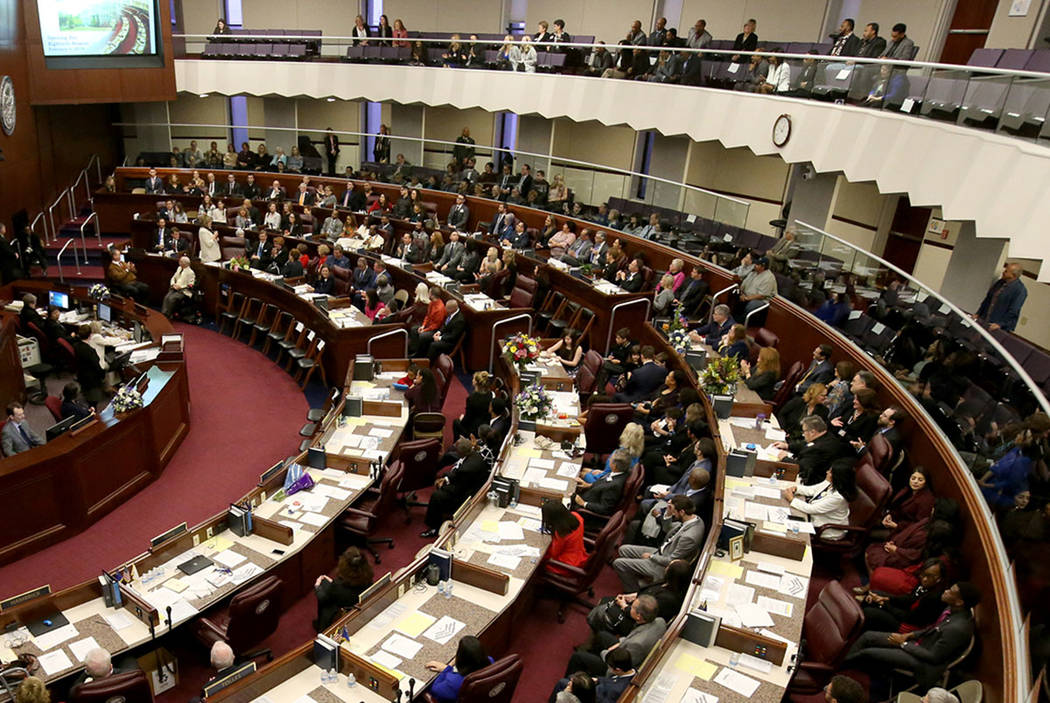 Lawmakers are seen in the Legislative Building in Carson City on the first day of the 80th session of the Nevada Legislature Monday, Feb. 4, 2019. (K.M. Cannon/Las Vegas Review-Journal)

CARSON CITY — The Senate gave final approval Monday to a bill that would reverse 2015 Republican-backed changes to state prevailing wage laws, reinstating them in full for school construction projects and reducing the cost threshold for public works projects covered by them.

Assembly Bill 136 passed on a party-line vote, 12-8, and now heads to the governor. Republicans voted against it on the grounds that it would drive up costs for publicly financed construction.

The Republican-controlled Legislature in 2015 set prevailing wages for school projects at 90 percent of the local prevailing wage, raised the cost threshold for projects to $250,000 from $100,000, and exempted charter schools from the law. The bill approved Monday would undo all of that. A similar measure passed in 2017 but was vetoed by then-Gov. Brian Sandoval, a Republican.

The measure was one of dozens passed in both houses Monday as lawmakers returned to work with two weeks of session left and hundreds of bills yet to vote on. Some 39 bills and one resolution died Friday when they failed to pass out of committee.

In the Assembly, lawmakers unanimously approved Assembly Bill 267, which would allow for people wrongfully convicted of crimes to receive financial compensation from the state. The bill now heads to the Senate.

Notable or interesting bills that failed to advance ahead of Friday’s deadline:

Assembly Bill 153: Would have criminalized negligent storage of a firearm where a minor could gain access to it. The bill passed the Assembly 32-9 but died in the Senate Judiciary Committee. Its provisions are expected to be added to another firearms bill.

Assembly Bill 355: Would have required grocery employers to retain certain workers for a period after a change in ownership. It passed Assembly 28-12 on party-line vote, but died in Senate Commerce and Labor Committee.

Assembly Bill 479: Would have toughened rules for importing, possessing, selling or breeding dangerous wild animals including poisonous snakes, big cats and bears. It passed the Assembly 31-9, but died in the Senate Natural Resources Committee.

Senate Bill 256: Would have changed procedures to increase protections for tenants facing eviction. That bill passed the Senate 11-10, but failed to pass out of the Assembly Commerce and Labor Committee.

Senate Bill 354: Would have changed the makeup of the state Higher Education Board of Regents, subject to the passage of a constitutional amendment by the Legislature and voters in 2020. It passed the Senate 15-6, but died in the Assembly Legislative Operations and Elections Committee.

Senate Bill 418: Would have strengthened rules on serving, storage, labeling and sale of raw milk. The Senate approved the measure 16-5, but the Assembly Health and Human Services Committee failed to send it to the Assembly floor.

Senate Bill 464: Would have made changes to the North Las Vegas city charter. The Senate passed the bill unanimously, but the Assembly Government Affairs Committee killed it.

Senate Bill 474: Would have increased number of training hours for drivers 18 under or younger to obtain a license. It passed in the Senate 13-8, but died in the Assembly Growth and Infrastructure Committee.