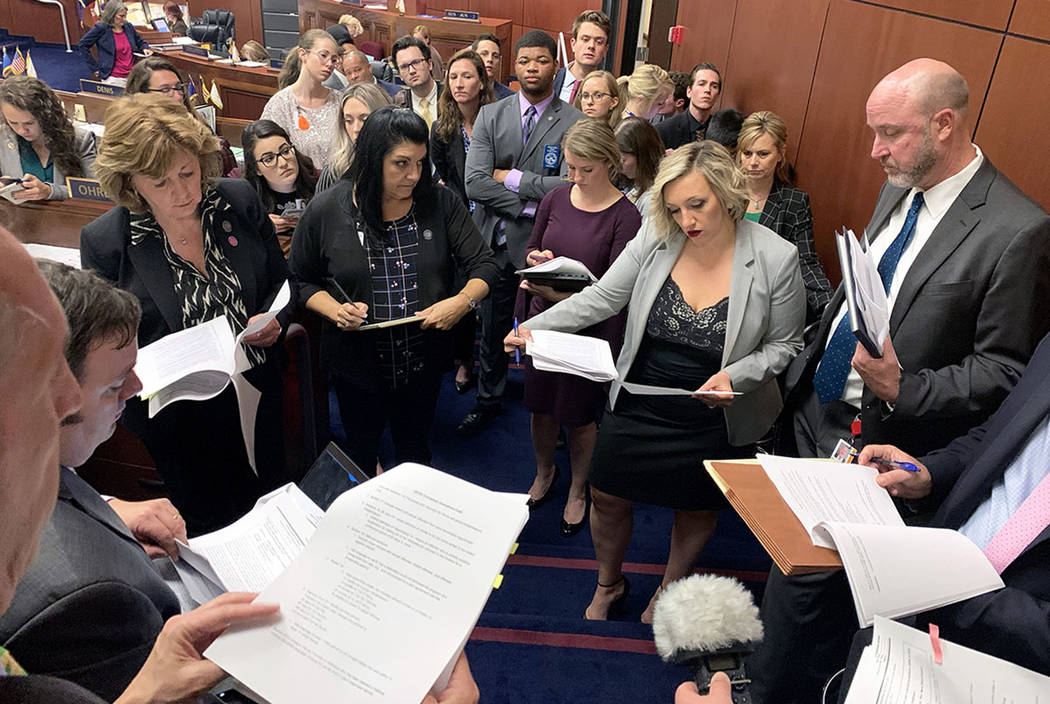 Senate Majority Leader Nicole Cannizzaro, D-Las Vegas, center, and other lawmakers meet in committee "behind the bar" on the Senate floor Sunday to pass bills and move them to the full Senate for votes in the waning hours of the legislative session in Carson City. (Bill Dentzer/Las Vegas Review-Journal).

CARSON CITY — The Nevada Legislature unanimously approved a two-year, $2.3 billion general fund spending plan for K-12 schools on Sunday, the first of five budget bills that heralds the end of the 2019 session.

The bill — which now heads to Gov. Steve Sisolak for his approval — also includes funds from other sources that will see Nevada’s total per pupil spending rise to $10,227 in the 2020 school year and $10,319 in the 2021 year, said Assemblywoman Maggie Carlton, chairwoman of the budget-writing Ways and Means Committee.

The bill includes nearly $38 million for school safety and $89 million for programs such as Zoom and Victory schools, along with money for professional development for teachers, Carlton said.

Under a state constitutional amendment adopted by voters in 2006, lawmakers must approve the education budget before the other four major budget bills, which encompass capital improvement projects, money to pay state employees, authorizing government spending and appropriating money to pay for government departments over the next two years.

The Senate unanimously approved the Authorizations Act on Sunday, and the Assembly unanimously approved the appropriations act, capital improvements program and state employee pay bill over the weekend. Now, those bills must be heard and approved in the opposite house before Monday’s midnight deadline. At press time Sunday, no other action had been taken on the budget measures.

In other news from Carson City on Sunday:

— The Senate passed Assembly Bill 533, which would create the Cannabis Compliance Board to oversee marijuana regulation. The bill also prohibits state or local governments from licensing marijuana lounges until at least 2021.

— Assembly Republicans introduced a last-minute measure on Sunday that would raise the legal age to buy tobacco products to 21. Assembly Bill 544 was introduced on the penultimate day of the 120-day lawmaking session. The new proposal follows a failed attempt last week in which Republicans attempted to amend Senate Bill 263, a bill that would add a 30 percent tax to vaping products.

— Senate Majority Leader Nicole Cannizzaro introduced her own last-minute measure, to tighten Nevada’s lax campaign finance statutes. Senate Bill 557 would require any organization that donates more than $10,000 to a candidate during a campaign cycle to disclose the contributions in an annual report to the Nevada secretary of state’s office, detailing each contribution of more than $100. The measure passed out of committee and now goes to the full Senate.

A more stringent version of a campaign finance bill was introduced last month by Senate Minority Leader James Settelmeyer that would have required any organization that donates more than $1,000 per year to file a report. That bill died without a hearing.