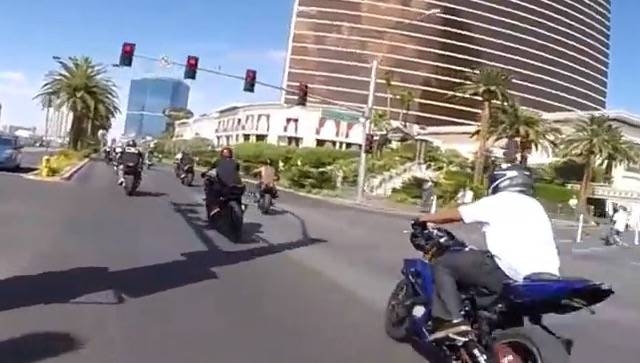 Las Vegas police on Monday showed state lawmakers a YouTube video of motorcyclists speeding, running red lights and performing stunts on the Strip in 2017. A proposed law backed by police would make such displays a specific class of crime with stiffer penalties. (YouTube)

CARSON CITY — Nevada might create stiffer penalties for motorcyclists who take to public roads in packs, blocking or weaving through traffic to perform stunts that police say put others and themselves at risk.

Las Vegas police, among other supporting agencies, say current laws aren’t tough enough to justify the resources officers need to track down offenders, who often ride without license plates and speed off from police, unpursued out of safety concerns.

If passed, it would make operating a vehicle in an unauthorized display of “trick driving” on a public road a form of reckless driving. The crime would be classified as a gross misdemeanor punishable by up to a year in jail or a $2,000 fine.

“This is an issue that the current reckless driving laws don’t cover in statute,” Chuck Callaway, representing Metro, told the Assembly Committee on Judiciary early Monday after playing a 2017 video of motorcyclists running red lights and performing tricks on the Strip.

Callaway said police have reached out to motorcyclist groups to organize legal trick-riding events, but officers have been rebuffed because they “want to do it illegally,” posting video of their exploits on social media.

“They want to be in the spotlight,” Callaway said. “They don’t want to go out at midnight on a country road and do it. They want to do it on the Strip on a Saturday when everyone’s around because they want the notoriety.”

In addition to misdemeanor penalties, offenders could lose driving privileges or have their vehicles impounded. A provision calling for possible vehicle forfeiture is likely to be removed or tweaked following a Supreme Court decision last month against local forfeiture statutes.

Some lawmakers on the panel expressed concerns that the law might inordinately penalize specific demographic groups, such as younger adults or those who stand to lose their only means of transportation. Callaway said the law was not designed to target any specific group.

“It doesn’t matter if they’re young or old,” he said. “It should apply equally to everyone.”

The bill remains pending before the committee.