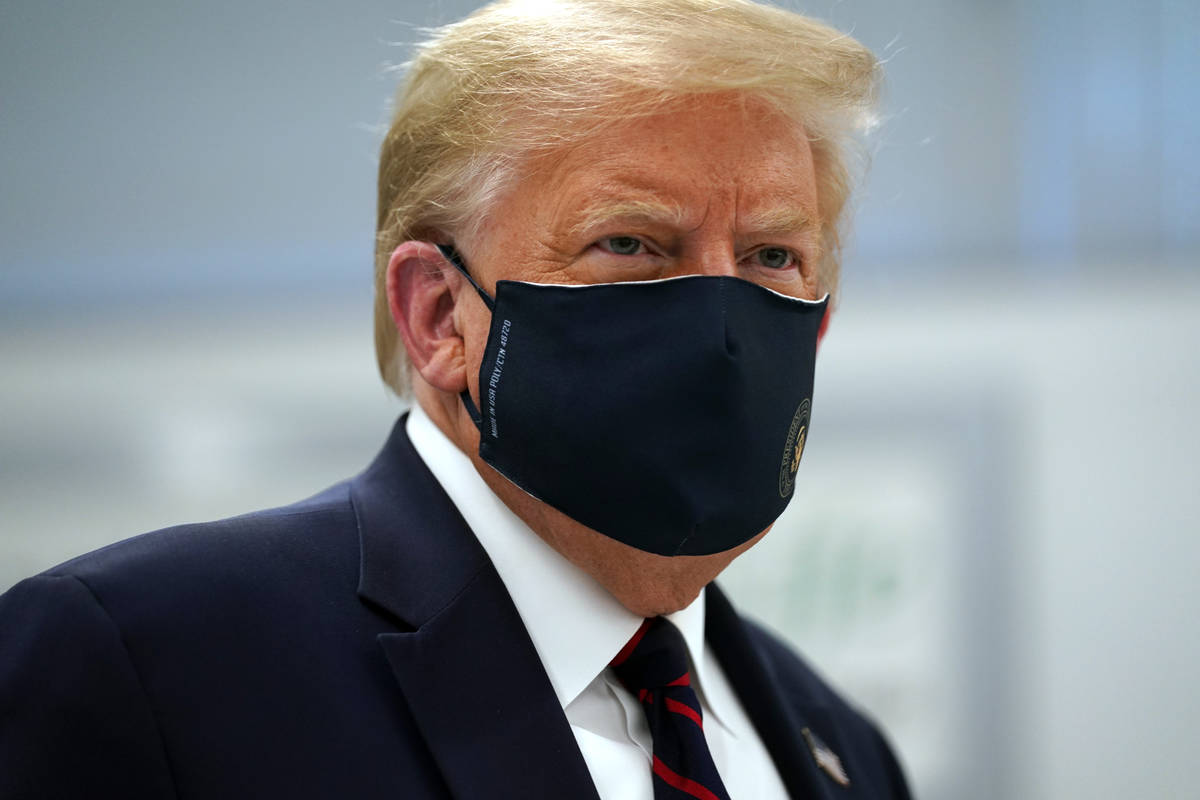 President Donald Trump wears a face mask as he participates in a tour of Bioprocess Innovation Center at Fujifilm Diosynth Biotechnologies on Monday, July 27, 2020, in Morrisville, N.C. (AP Photo/Evan Vucci)

WASHINGTON — President Donald Trump, lagging in the polls and confronted by fresh evidence of an economic collapse and an escalating public health crisis, on Thursday suggested delaying the Nov. 3 presidential election as he pushed unsubstantiated allegations that increased mail-in voting due to the coronavirus pandemic will result in fraud.

It was the first time Trump publicly raised the idea of pushing back the balloting. Shifting the election is virtually impossible, but the mere suggestion of delay was extraordinary in a nation that has held itself up as a beacon to the world for its history of peaceful transfer of power, including during the Civil War, the Great Depression and World War II and marked another bracing attempt by Trump to undermine confidence in the American political system.

With Universal Mail-In Voting (not Absentee Voting, which is good), 2020 will be the most INACCURATE & FRAUDULENT Election in history. It will be a great embarrassment to the USA. Delay the Election until people can properly, securely and safely vote???

Trump’s tweet came on a day of bad economic news and amid a dark political patch for his re-election effort.

The date of the presidential election — the Tuesday after the first Monday in November in every fourth year — is enshrined in federal law and would require an act of Congress to change, including agreement from the Democratic-controlled House of Representatives. Regardless, the Constitution makes no provisions for a delay in the end of Trump’s term — noon on Jan. 20, 2021.

“With Universal Mail-In Voting (not Absentee Voting, which is good), 2020 will be the most INACCURATE & FRAUDULENT Election in history,” Trump tweeted Thursday. “It will be a great embarrassment to the USA. Delay the Election until people can properly, securely and safely vote???”

Nevada is widely recognized as being a leader in election administration, and we will continue to support the safest, most accessible election possible under these unprecedented circumstances. Nevada will hold its election as required by law on November 3. https://t.co/Wkdqu8P4JA

Trump’s tweet came just minutes after the government reported that the U.S. economy shrank at a dizzying 32.9 percent annual rate in the April-June quarter, by far the worst quarterly plunge ever, as the coronavirus outbreak shut down businesses, threw tens of millions out of work and sent unemployment surging to 14.7 percent.

With just over three months until Election Day, Trump trails in the polls nationally and across battleground states, and some surveys even suggest traditionally Republican-leaning states could be in play. While Trump has come back before after trailing consistently in the polls throughout 2016, the survey data has raised the possibility that he could face a landslide loss if he doesn’t turn things around.

Trump has increasingly sought to cast doubt on November’s election and the expected pandemic-induced surge in mail-in and absentee voting. He has called remote voting options the “biggest risk” to his re-election. His campaign and the Republican Party have sued to combat the practice, which was once a significant advantage for the GOP.

There is no evidence of widespread voter fraud through mail-in voting, even in states where all votes are mailed in. Five states already rely exclusively on mail-in ballots, and they say they have necessary safeguards in place to ensure that a hostile foreign actor doesn’t disrupt the vote. Election security experts say that all forms of voter fraud are rare, including absentee balloting.

One Republican governor, Chris Sununu of New Hampshire, quickly shot down Trump’s idea: “Make no mistake: the election will happen in New Hampshire on November 3rd. End of story. Our voting system in NH is secure, safe, and reliable. We have done it right 100% of the time for 100 years — this year will be no different.”

Hogan Gidley, the Trump campaign’s national press secretary, pointed to the delays in counting votes in New York’s primary. “The President is just raising a question about the chaos Democrats have created with their insistence on all mail-in voting. They are using coronavirus as their means to try to institute universal mail-in voting, which means sending every registered voter a ballot whether they asked for one or not. “

Trump refused in an interview just weeks ago with Fox News to commit to accept the results of the upcoming White House election, recalling a similar threat he made weeks before the 2016 vote.

Trump and many members of his administration have previously availed themselves of absentee voting, but Trump has sought to differentiate that from a growing push by states to mail all registered voters either ballots or absentee request forms.

Most states are still finalizing their plans for November, although California has announced plans to send ballots to all registered voters for the fall election along with having in-person voting options available. A small number of states also sent ballots to voters during the primaries, but most states are not expected to do so in November. Instead, voters will have to request an absentee ballot if they want to vote at home.

Voters and public health officials have expressed concerns about the potential dangers for spreading the virus during in-person voting, and states have reported difficulty filling poll worker positions given the pandemic.

Trump’s stated concern for poll safety defies his otherwise aggressive push to “reopen” the nation from partial shutdowns meant to slow the spread of the virus, even as rising confirmed coronavirus cases and deaths have pushed the U.S. to the top of the list for the world outbreak.

“He has absolutely no power to do this,” said Wendy Weiser, director of the democracy program at the Brennan Center for Justice at NYU’s Law School. “And Congress is not going to vote to change the statute that has governed for decades and decades when and how we hold elections. This is just sowing chaos.”

Last month, Trump told supporters in Arizona that “This will be, in my opinion, the most corrupt election in the history of our country.”

“The Congress may determine the Time of choosing the Electors, and the Day on which they shall give their Votes; which Day shall be the same throughout the United States.” https://t.co/NIaa7mQVnn

There appears to be next-to-no appetite in the Capitol for a change to the Nov. 3 election. Democratic House Speaker Nancy Pelosi replied to Trump’s tweet by tweeting a quote from the Constitution assigning Congress the power to set the timing of elections.

Democrats have pushed to include billions of dollars in the next coronavirus relief bill to fund election security and accessibility improvements for this year’s vote, but Trump and Republicans have so far resisted those efforts.

Senate Majority Leader Mitch McConnell, R-Ky., did not respond to questions about Trump’s tweet on the way to the Senate floor Thursday morning.

Just months ago, in April, Trump had ruled out the prospect of trying to change the election. “I never even thought of changing the date of the election,” he said. “Why would I do that? November 3rd. It’s a good number. No, I look forward to that election.”

And in March, Trump opposed moves by several states to delay their presidential primaries because of the coronavirus.

Attorney General William Barr, speaking to a House committee earlier this week, claimed there was “a high risk” that mail-in voting would lead to “massive” fraud. He said he had no “reason to think” the upcoming election would be rigged. But he said he believed “if you have wholesale mail-in voting, it substantially increases the risk of fraud.”

Rep. Cedric Richmond, D.-La., asked Barr at the hearing whether a sitting U.S. president could move the election date. Barr responded: “Actually, I haven’t looked into that question under the Constitution.”