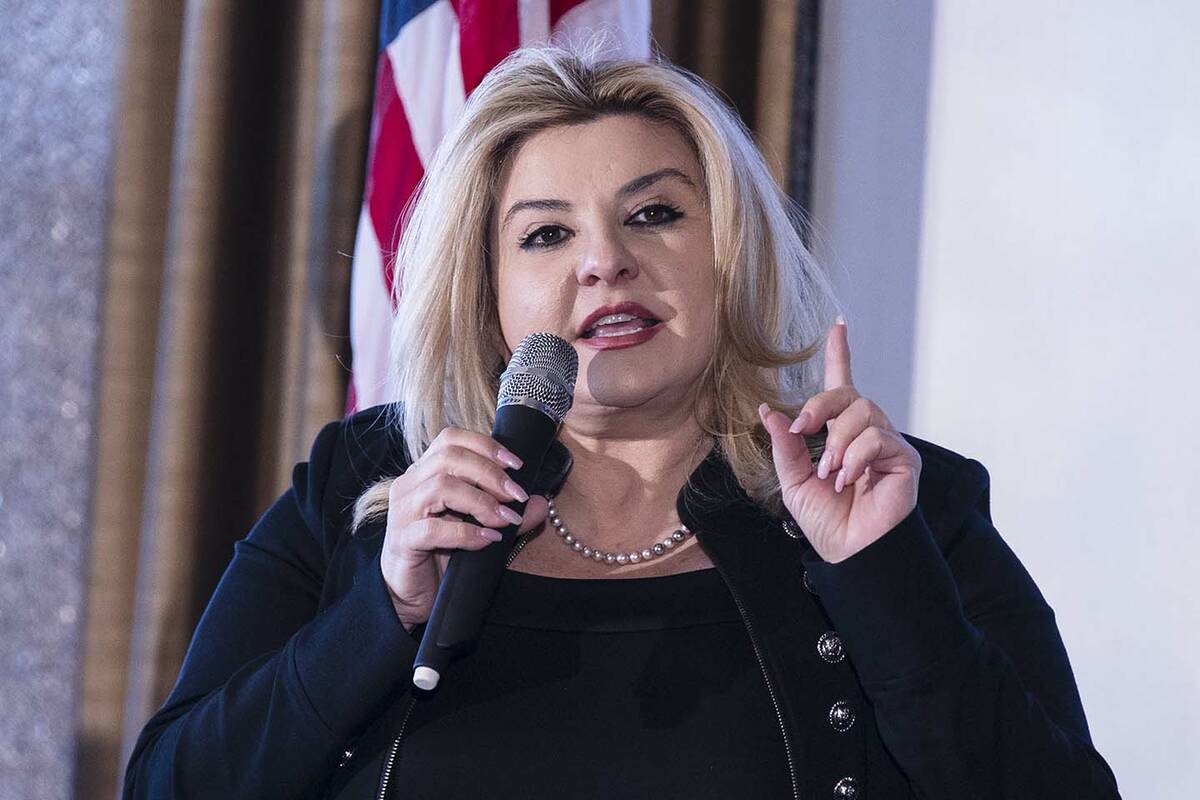 Michele Fiore, then a Republican candidate for Nevada governor, speaks during a debate on Feb 8, 2022, in Henderson. She filed on Thursday, March 17, 2022, to run for Nevada state treasurer. (Bizuayehu Tesfaye/Las Vegas Review-Journal) @btesfaye 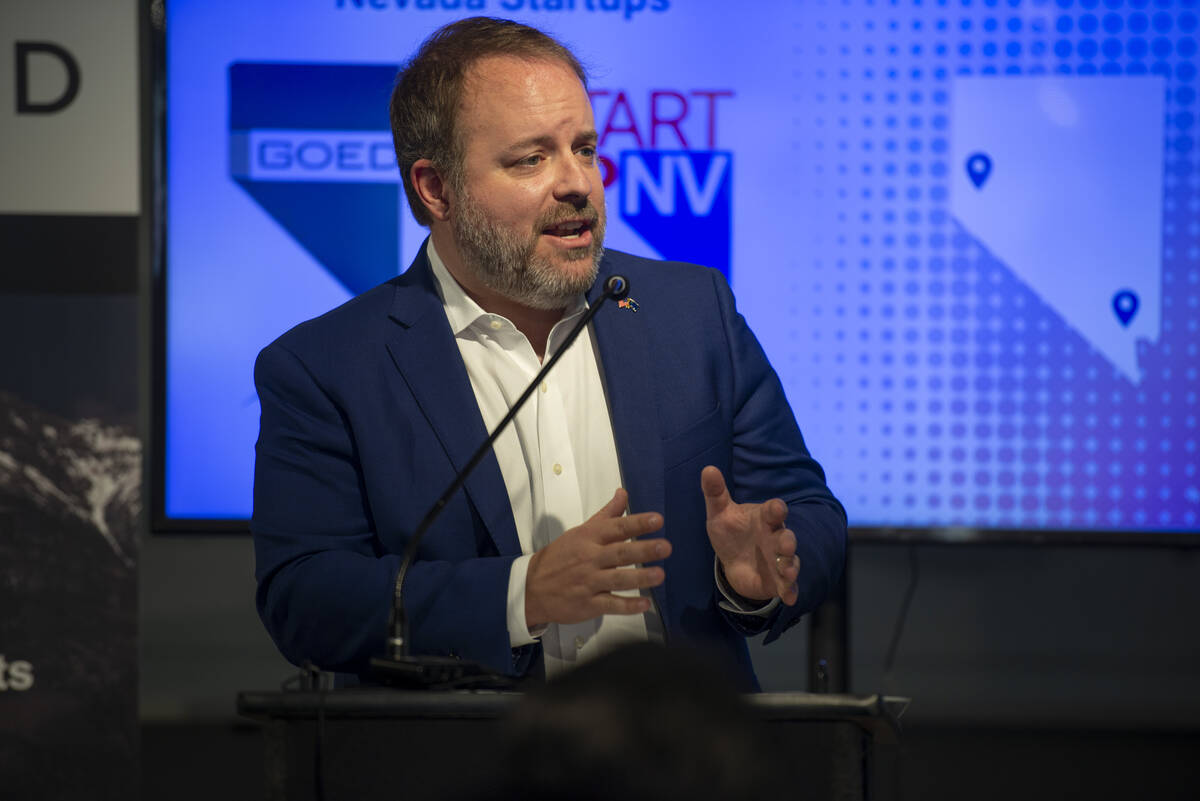 Sometimes, you just have to know when to quit.

Las Vegas Councilwoman Michele Fiore was understandably irked when the campaign of state Treasurer Zach Conine filed a complaint with the state Ethics Commission because Fiore had failed to list a business on her required annual financial disclosure statement.

That business, which the secretary of state’s website shows as revoked, was a joint venture with disgraced ex-Las Vegas Councilman Ricki Y. Barlow, who went to federal prison briefly over some campaign finance shenanigans. He recently endorsed Fiore in her race against Conine for treasurer.

As campaign hits go, it was a base hit, a regulatory infraction for a business that never really got off the ground.

But then, Fiore touted an ethics complaint that was filed against Conine for allegedly running a business right out of the state treasurer’s office!

“It’s recently been brought to my attention that an ethics complaint was just filed against my opponent Zach Conine for unlawfully keeping his business dealings from Nevadans,” Fiore wrote in an email on Sept. 23, that also asked for donations to her campaign. “As it turns out, Conine is listed as the President and Director for Nevada Capital Investment Corporation, a questionable business whose address is listed as the Nevada State Treasurer’s office.

“If Conine is doing business out of the same office where Nevadans’ public funds are managed, why wasn’t this information disclosed to residents as state law requires?”

It’s a good question. And Conine had a pretty good answer: Because that’s a public nonprofit corporation that the state treasurer, by law, is required to lead. And not only is it not a secret business, it’s a thriving one, with returns more than doubling since Conine took on his legally mandated duties overseeing it.

“Michele Fiore is the most comprehensively unqualified major party candidate for constitutional office in Nevada history, and her failure to even understand the job she is asking Nevadans to give her underscores that sad truth every single day,” Conine said in a statement.

Now, at this point, it would probably have been advisable to just forget the whole thing, chalk it up to shoddy research, move on and hope everybody forgets the entire matter.

On Tuesday, Fiore emailed the exact same attack against Conine again, as if he hadn’t completely disproved her original charges. Unless this was some kind of email glitch, the strategy behind the move is a mystery, but it certainly raises the stakes from felonious campaign malpractice to Category 1A Capital Campaign Malpractice in the First Degree, with sentencing enhancements.

Will we see this material again? Checking the in-box regularly.

Every campaign, candidates highlight how various groups of people are supporting them, often with a list of names attached. Often, it’s alliterative, such as “Republicans for Reid” in 2010 or “Latinos for Laxalt” this year.

This week, Gov. Steve Sisolak released a really long list of Young Nevadans for Sisolak. But in an odd twist, the list contained only first names and last initials! It was as if the Young Nevadans didn’t really want people to know they were for Sisolak!

We are assured by the campaign that each of the people is real, and there are some unique names on the list. But many are quite common. Craig V.? Paul C.? Kyle F.? That could be anybody!

This could, however, become a new trend that would allow famous political people to endorse somebody without actually putting it all on the line. For example, what if “Brian S.” from Reno endorsed, say, Catherine Cortez Masto for Senate? Or if “Marilyn K.” from North Las Vegas backed Joe Lombardo for governor? For sure you know “Debra M.” from Henderson is leaning toward Lombardo. And “Carolyn G.” from Las Vegas. And maybe even “Dina T.”!

Can somebody check on Eddie?

Eddie may have gotten himself into big trouble.

Eddie, who is a staffer on ex-Attorney General Adam Laxalt’s U.S. Senate campaign, admitted in an email Wednesday that he was directly disobeying his candidate’s orders by asking for money.

“Adam asked me not to bother you,” reads the subject line of the email. In the body, he writes: “Adam would be really mad if he knew I was reaching out to you like this, but I think it’s really important. Our crucial FEC deadline is coming up and I’m worried that our fundraising numbers aren’t looking too good. This is our FINAL quarterly deadline before election day, and it’s vital that we post a huge number to show the enthusiasm behind our campaign.”

Man, that’s rough. Not only did Eddie go behind Laxalt’s back to email, but he admitted the campaign’s fundraising is lagging! We sure hope Laxalt doesn’t find out he did this! In fact, can somebody at the Laxalt HQ check on Eddie?

Oh, wait, never mind: Eddie emailed again on Friday, this time to say that Laxalt had asked him specifically to reach out to us. “Eddie, I was looking through the list of top donors from the past quarter and I realized Steve isn’t on the list. I know they are one of our top supporters, so maybe they haven’t been seeing our messages? Can you reach out and ask if they can chip in one more time before the FEC Deadline closes?”

In November, voters are going to see three statewide questions on their ballot, all to amend the state constitution. Question 1 asks if voters want to include equal rights language, Question 2 asks if they want to establish a $12 per hour minimum wage and Question 3 asks if they want to create open primaries and ranked choice general elections.

You can read more about these questions in the secretary of state’s booklet here.

You may see some legal notices in the Monday Review-Journal for the next three weeks, outlining these questions and listing the candidates for office. Just to be clear, this is not the Review-Journal’s voter guide for 2022. The voter guide – in which we interview nearly every candidate running for office – will appear in print and online on Oct. 7. We’ll include a link to those pages in next week’s Party Lines, so stay tuned for that.