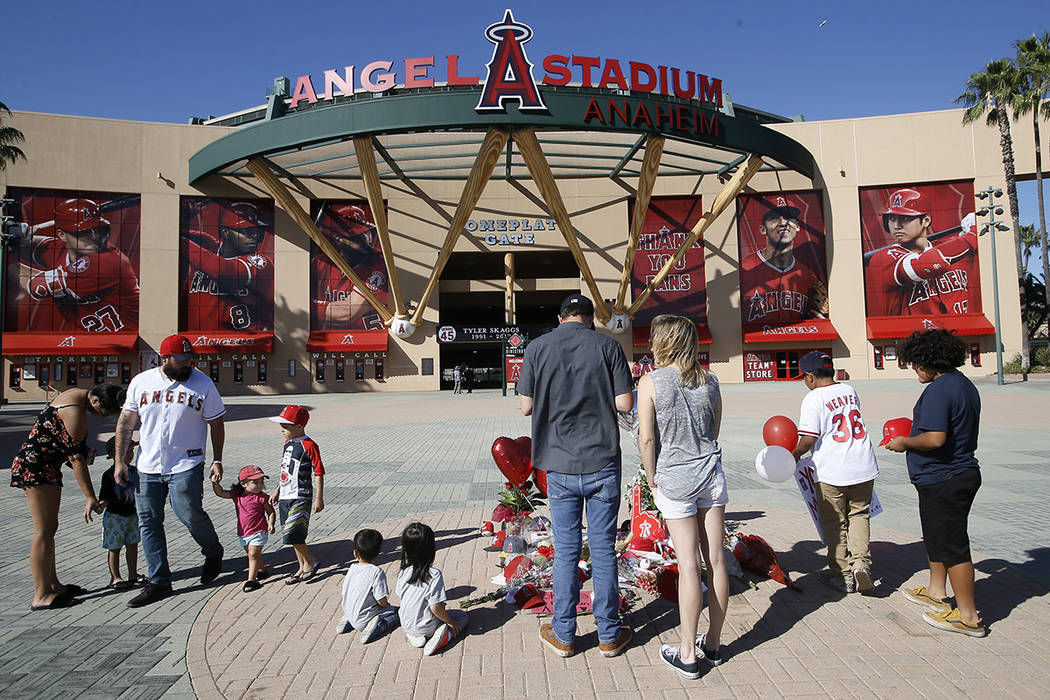 Los Angeles Angel mourners stand at a memorial to give their condolences for pitcher Tyler Skaggs at Angel Stadium in Anaheim, Calif., Monday, July 1, 2019. Skaggs died at the age of 27, stunning Major League Baseball and leading to the postponement of the team's game against the Texas Rangers on Monday. (AP Photo/Alex Gallardo) 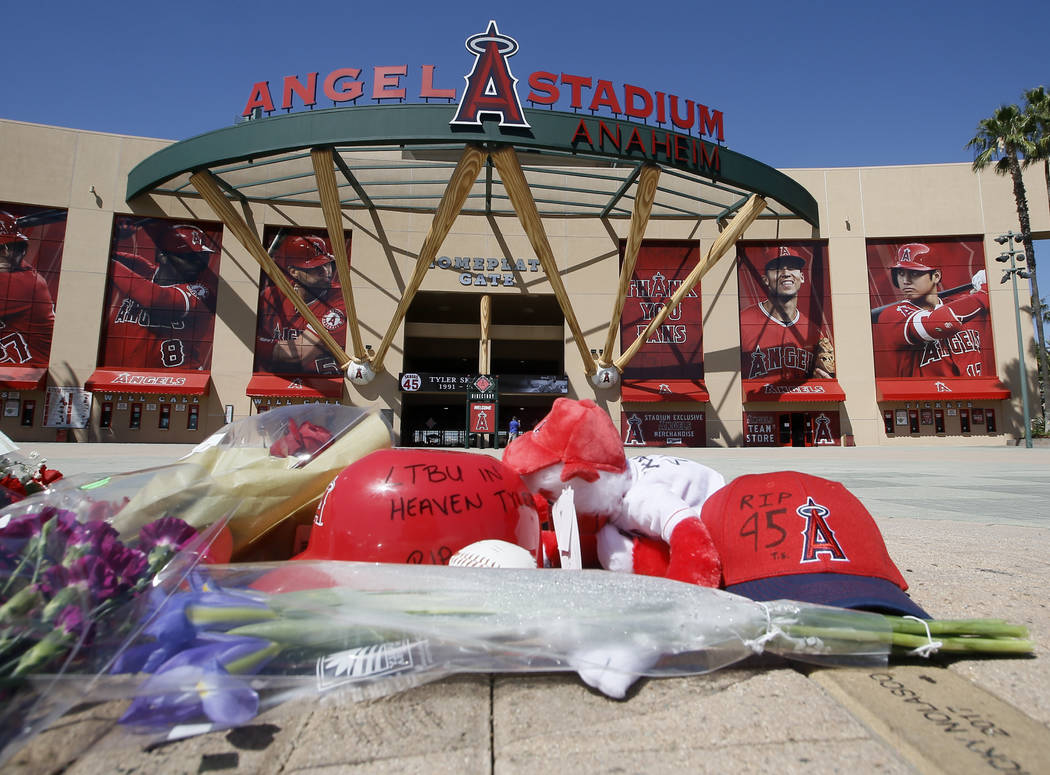 A makeshift memorial is set up in front of Angels Stadium in Anaheim, Calif., for pitcher Tyler Skaggs who died Monday at the age of 27, in Texas, stunning Major League Baseball and leading to the postponement of the team's game against the Texas Rangers Monday, July 1, 2019. (AP Photo/Alex Gallardo) 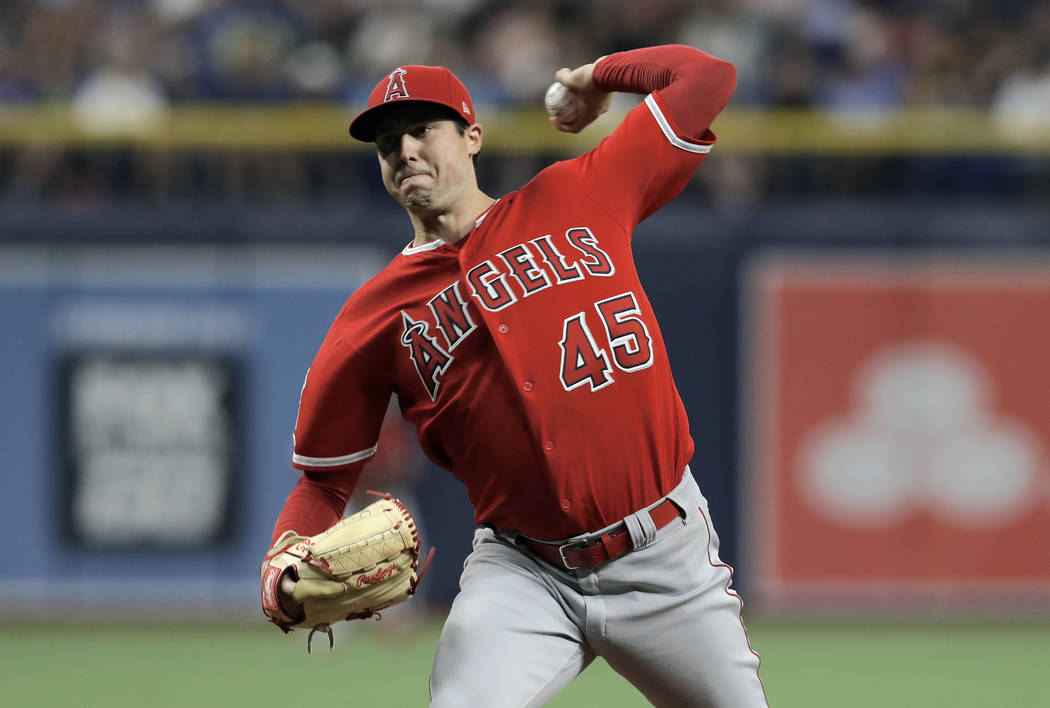 FILE - In this June 13, 2019 file photo Los Angeles Angels' Tyler Skaggs pitches to the Tampa Bay Rays during the first inning of a baseball game in St. Petersburg, Fla. Tyler Skaggs has died at age 27, Monday, July 1, 2019. Skaggs started the Angels' game Saturday night against the Athletics. Their game against the Texas Rangers on Monday night has been postponed. (AP Photo/Chris O'Meara, file) 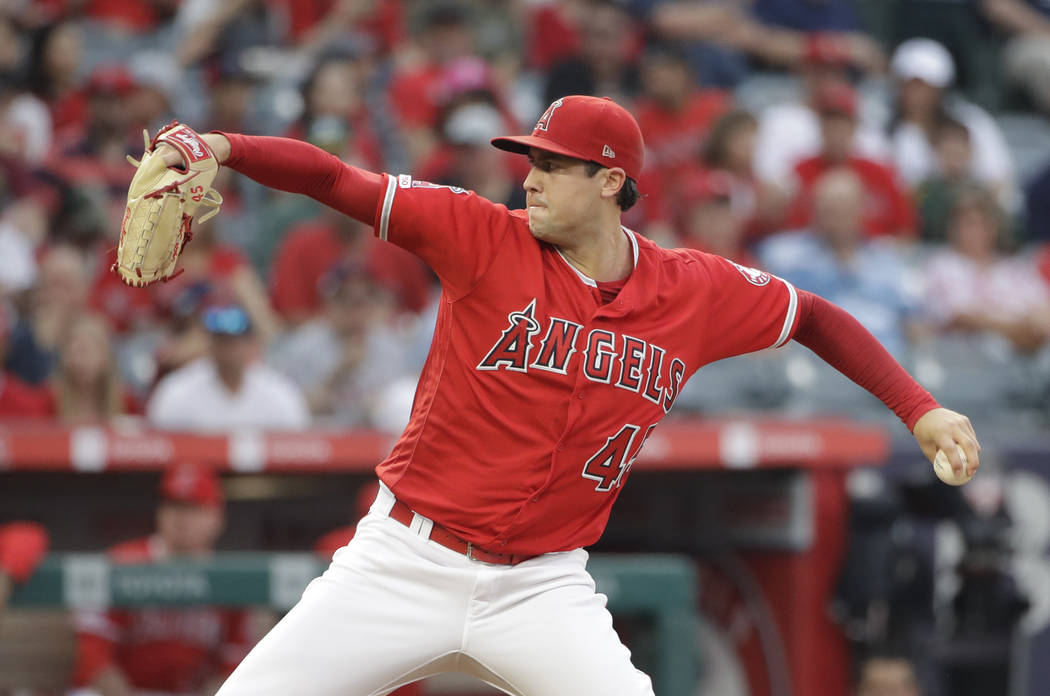 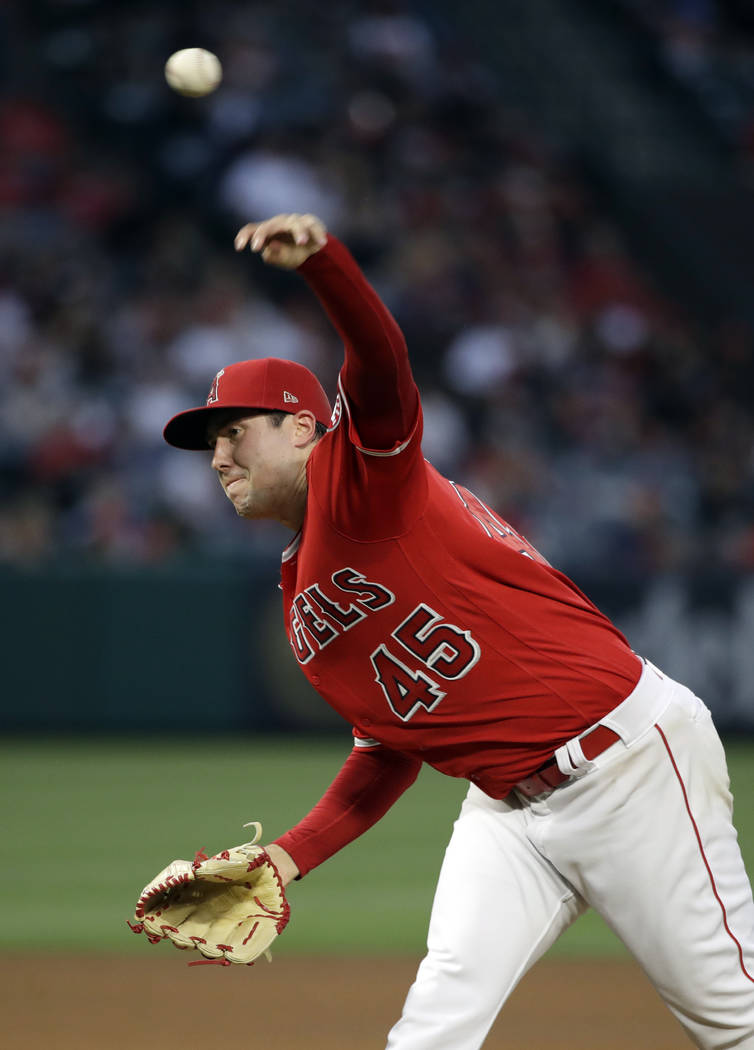 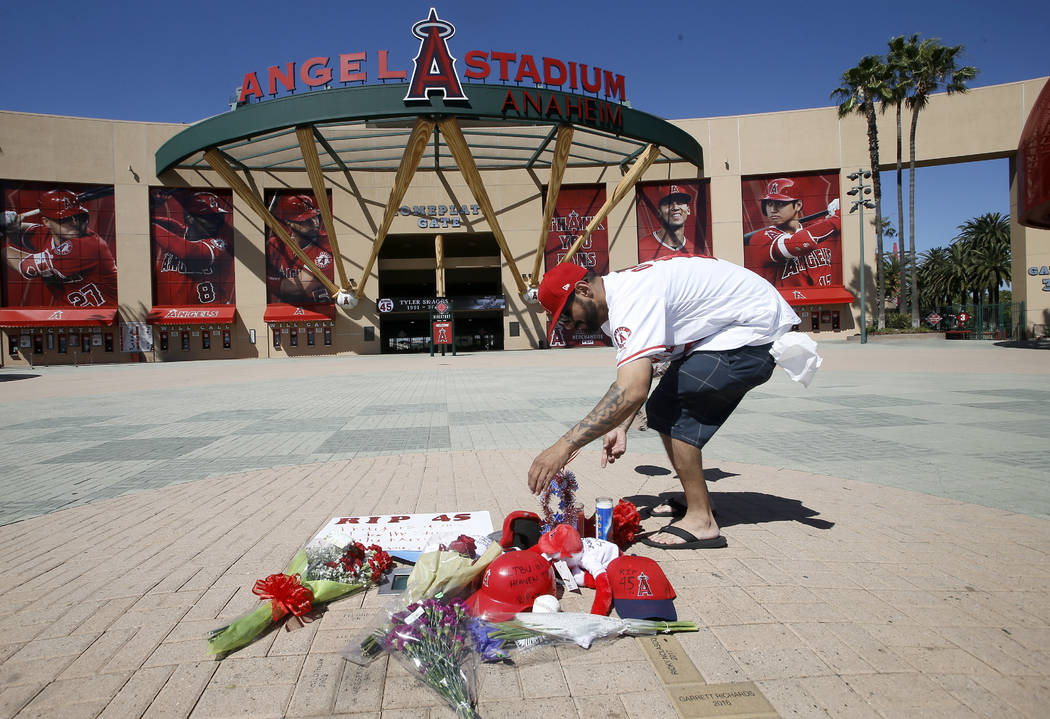 Los Angeles Angels fan Steven Beltran adds to a makeshift memorial at Angels Stadium in Anaheim, Calif., for pitcher Tyler Skaggs, who died Monday at the age of 27, in Texas, stunning Major League Baseball and leading to the postponement of the team's game against the Texas Rangers Monday, July 1, 2019. (AP Photo/Alex Gallardo) 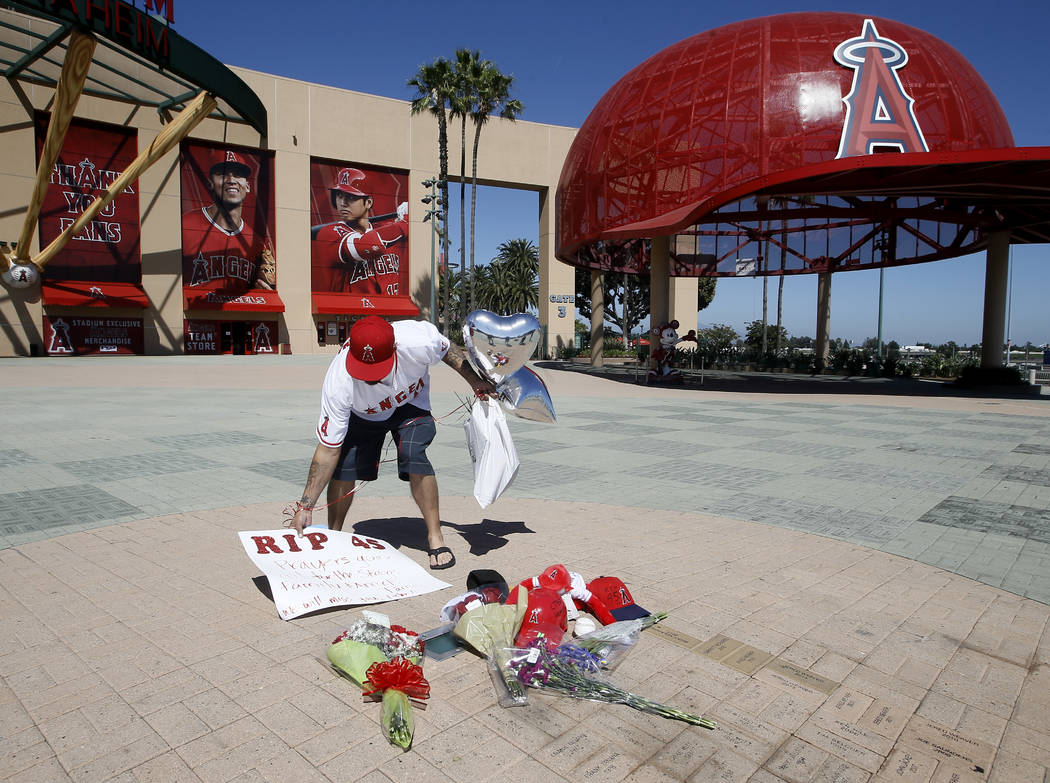 Los Angeles Angels fan Steven Beltran adds to a make-shift memorial at Angels Stadium in Anaheim, Calif., for pitcher Tyler Skaggs, who died Monday at the age of 27, in Texas, stunning Major League Baseball and leading to the postponement of the team's game against the Texas Rangers Monday, July 1, 2019. (AP Photo/Alex Gallardo)

ARLINGTON, Texas — Tyler Skaggs had persevered through injuries to be a valuable pitcher for the Los Angeles Angels.

The left-hander had posted a photo of himself and teammates in cowboy hats for their weeklong trip to Texas where he was set to start on the Fourth of July holiday.

The 27-year-old pitcher died Monday, when he was found unresponsive in his hotel room in Texas, stunning Major League Baseball and leading to the postponement of Los Angeles’ series opener against the Rangers.

Skaggs was “an important part of the Angels Family,” the team said in a statement. “Our thoughts and prayers are with his wife, Carli, and his entire family during this devastating time.”

Angels statement on the passing of Tyler Skaggs. pic.twitter.com/6XA2Vu1uWV

Police said they were investigating but that no foul play was suspected. Skaggs was pronounced dead at the scene.

Skaggs, who would have turned 28 on July 13 and was married just seven months ago, had been a regular in the Angels’ starting rotation since late 2016, when the left-hander returned from Tommy John surgery. He struggled with injuries repeatedly in that time but was 7-7 in 15 starts this season to help an injury-plagued rotation.

In his cowboy-themed Instagram post Sunday, Skaggs wrote “Howdy y’all” and made reference to the Texas trip for games against the Rangers and the Houston Astros this weekend.

“We will support the Angels’ organization through this most difficult period, and we will make a variety of resources available to Tyler’s teammates and other members of the baseball family,” Manfred said in a statement.

At the team’s hotel about 20 miles from the ballpark, All-Star center fielder Mike Trout was among players in the lobby and a nearby patio before they all left together to go to another part of the hotel. None of the players spoke to reporters, but Trout shared his thoughts on Twitter.

“Words cannot express the deep sadness we feel right now. Our thoughts and prayers are with Carli and their families. Remembering him as a great teammate, friend, and person who will forever remain in our hearts… we love you, 45,” Trout said in the post.

Words cannot express the deep sadness we feel right now. Our thoughts and prayers are with Carli and their families. Remembering him as a great teammate, friend, and person who will forever remain in our hearts… we love you, 45. pic.twitter.com/zCO8Ne01Gy

A fan with an Angels jersey sat on a rock wall near the hotel entrance with a bouquet of flowers attached to a balloon that read “thank you.”

Skaggs is the first Angels player to die during a season since Nick Adenhart was killed by a drunken driver 10 years ago. The 22-year-old rookie right-hander was coming off his first start of the 2009 season, his fourth career game in the big leagues.

Jose Fernandez, a two-time All-Star pitcher for the Miami Marlins, was killed in a boating crash near Miami Beach, Florida, in September 2016. He was 24.

Pitcher Darryl Kile, who played in the majors for 12 seasons (1992-2002) was on the road with the St. Louis Cardinals when he died in June 2002 in his Chicago hotel room at age 33. Albert Pujols, now a member of the Angels, was Kile’s teammate then.

The Angels clubhouse was never opened to the media before players and coaches who had already arrived for Monday night’s game left together to return to the hotel.

Texas general manager Jon Daniels and manager Chris Woodward told their players what had happened and dismissed them.

Woodward described it as “one of those moments where you’re just kind of numb” and said the Rangers were thinking about Skaggs’ family and the Angels organization.

“There were a lot of pretty emotional guys in there,” Woodward said. “Some guys that didn’t even know him were visibly shaken.”

Rangers officials said there had been no discussions on the status of Tuesday’s game or the rest of what was supposed to be a four-game series. They said only that Monday’s game would not be made up this week.

Our deepest sympathies are with the family of Tyler Skaggs & the entire @Angels organization. pic.twitter.com/Xi1qNEmbRa

Skaggs was born in the Los Angeles neighborhood of Woodland Hills, in the far western part of the sprawling San Fernando Valley. He graduated from Santa Monica High School in 2009, when the Angels drafted him in the first round.

The Angels traded Skaggs to Arizona in 2010, and he started his big league career with 13 appearances over two seasons for the Diamondbacks. The Angels reacquired him in December 2013, and he won 25 games over five seasons with the club.

Skaggs started a career-high 24 games last season, going 8-10 with a 4.02 ERA. He missed playing time in April this season with a sprained ankle but came back strong.

Skaggs was part of the same Angels’ draft class as Trout, and they were roommates in the low minor leagues before Skaggs was traded to Arizona. They played on the same team in Cedar Rapids, Iowa, in 2010.

Cleveland Indians pitcher Trevor Bauer, who played with Skaggs in the Diamondbacks organization, tweeted: “We came up together. We won together. We laughed and celebrated together. Today, we all lose and mourn together.”

Skaggs’ mother, Debbie, was the longtime softball coach at Santa Monica High School. She famously provided postgame tips on his pitching mechanics, even deep into his big-league career.

Skaggs grew up in Santa Monica, on the west side of the sprawling Los Angeles metroplex, but rooted for the Angels instead of the closer Dodgers.