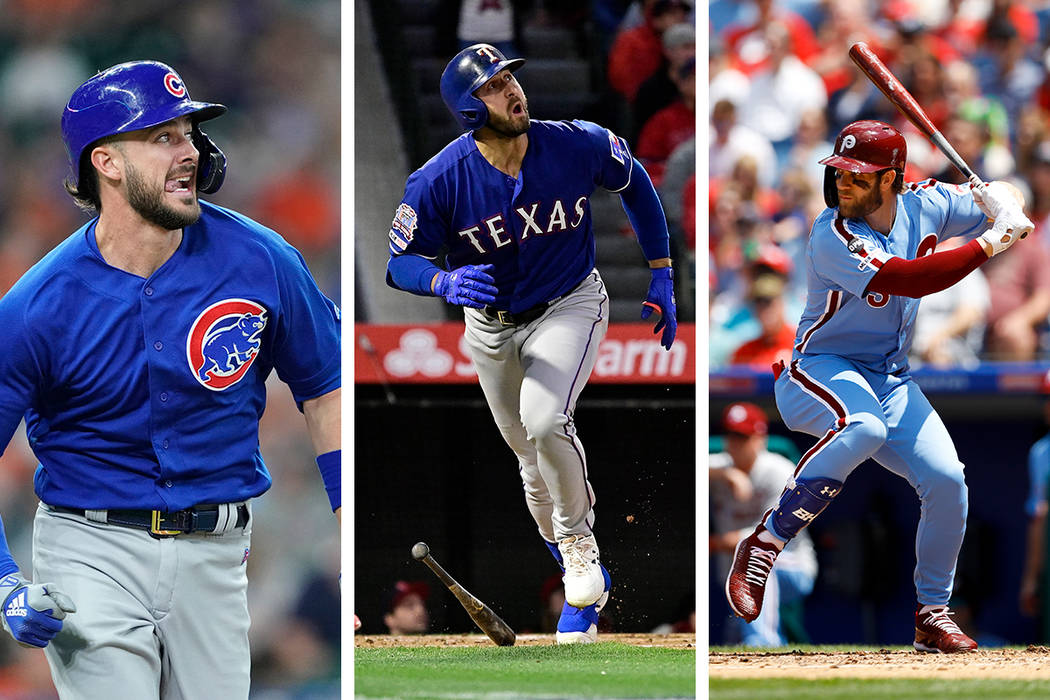 Kris Bryant of the Chicago Cubs (from left), Joey Gallo of the Texas Rangers and Bryce Harper of the Philadelphia Phillies. (AP/File) 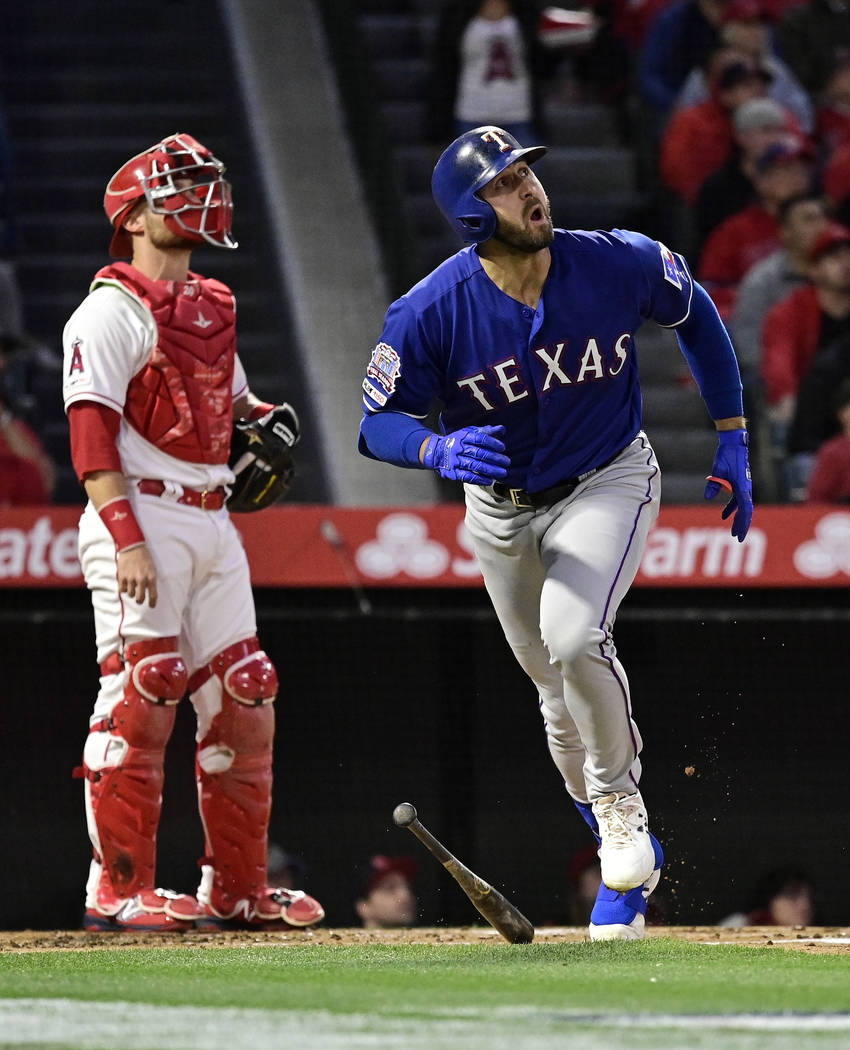 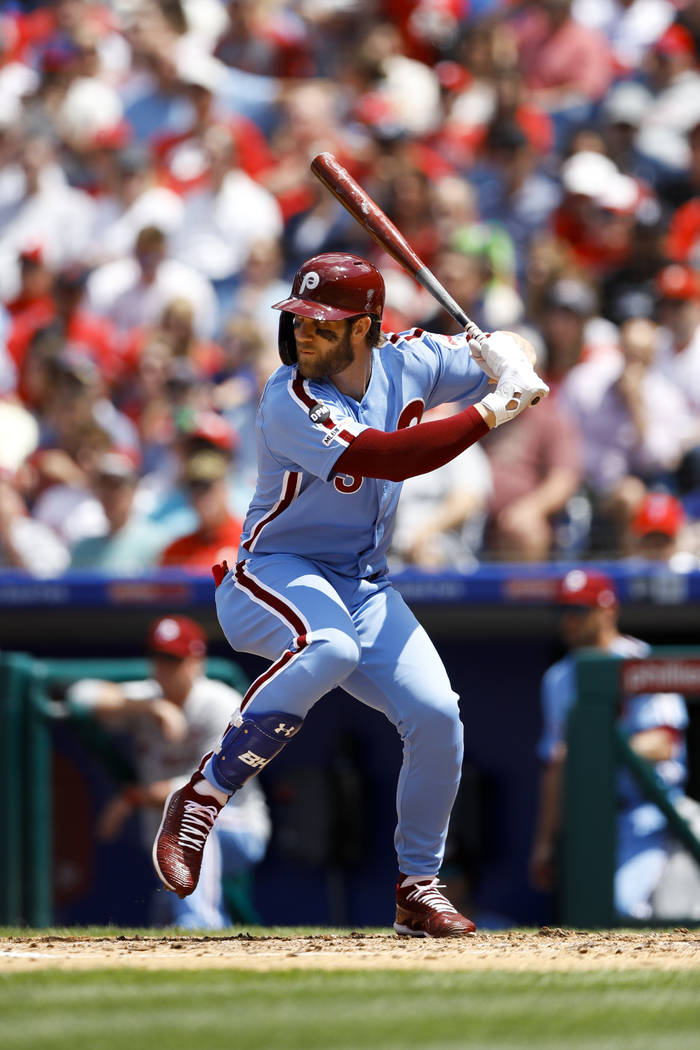 Philadelphia Phillies' Bryce Harper in action during a baseball game against the Milwaukee Brewers, Thursday, May 16, 2019, in Philadelphia. (AP Photo/Matt Slocum) 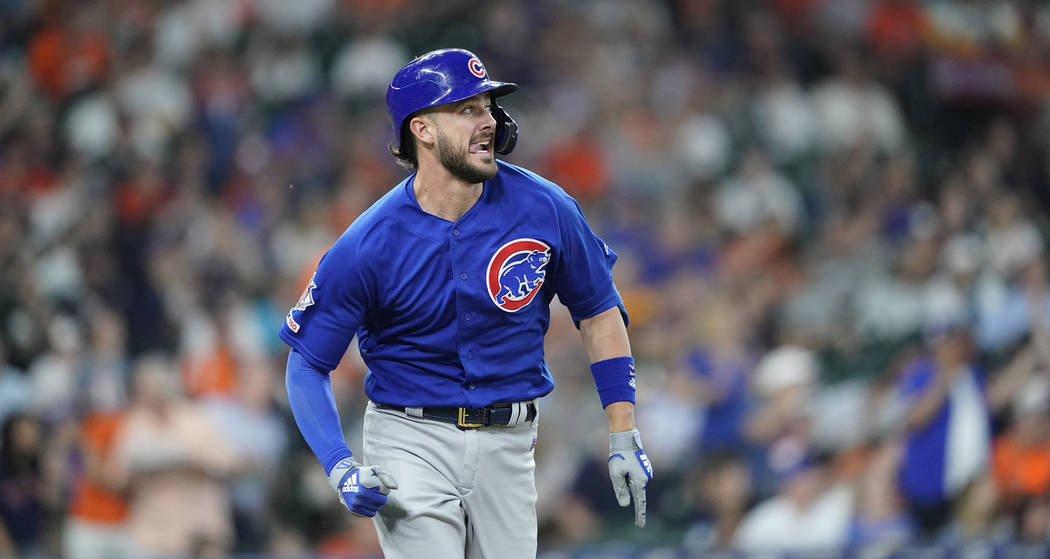 Chicago Cubs' Kris Bryant watches his home run against the Houston Astros during the third inning of a baseball game Wednesday, May 29, 2019, in Houston. (AP Photo/David J. Phillip)

Two players with Las Vegas roots — Chicago Cubs third baseman Kris Bryant and Texas Rangers outfielder Joey Gallo — are poised to advance to the next round.

Perennial All-Star Bryce Harper of the Philadelphia Phillies is on the outside looking in.

MLB revamped its voting procedures this year, implementing the Primary Round and Starters Election. The top three vote-getters at each position per league (and top nine in the outfield) as of 1 p.m. June 21 will advance.

Gallo, a Bishop Gorman graduate, is in eighth place with 281,179 votes, nearly 80,000 ahead of the Twins’ Max Kepler. He is leading the AL in slugging percentage (.653), with 17 homers, 41 RBIs and a career-high .276 average. Gallo’s tape-measure rockets have dominated sports highlight reels, but he’s been sidelined since June 2 with a left oblique strain.

Harper (Las Vegas High, College of Southern Nevada), who signed a 13-year, $330 million deal with the Phillies after seven seasons with Washington, is 10th in the voting with 242,719 votes, trailing Alex Verdugo of the Los Angeles Dodgers by 269 votes.

Harper, who made six All-Star Games with the Nationals, is hitting .251 with 11 homers and 45 RBIs but also leading the NL in strikeouts (85).

Despite helping the Rays going neck-and-neck with the New York Yankees for the AL East lead, outfielder Tommy Pham (Durango) is likely hampered by Tampa Bay’s miserable attendance mark. Pham, hitting .282 with 8 homers and 25 RBIs, is 15th in the AL vote (119,691).

The 90th annual contest will be held July 9 at Progressive Field in Cleveland.