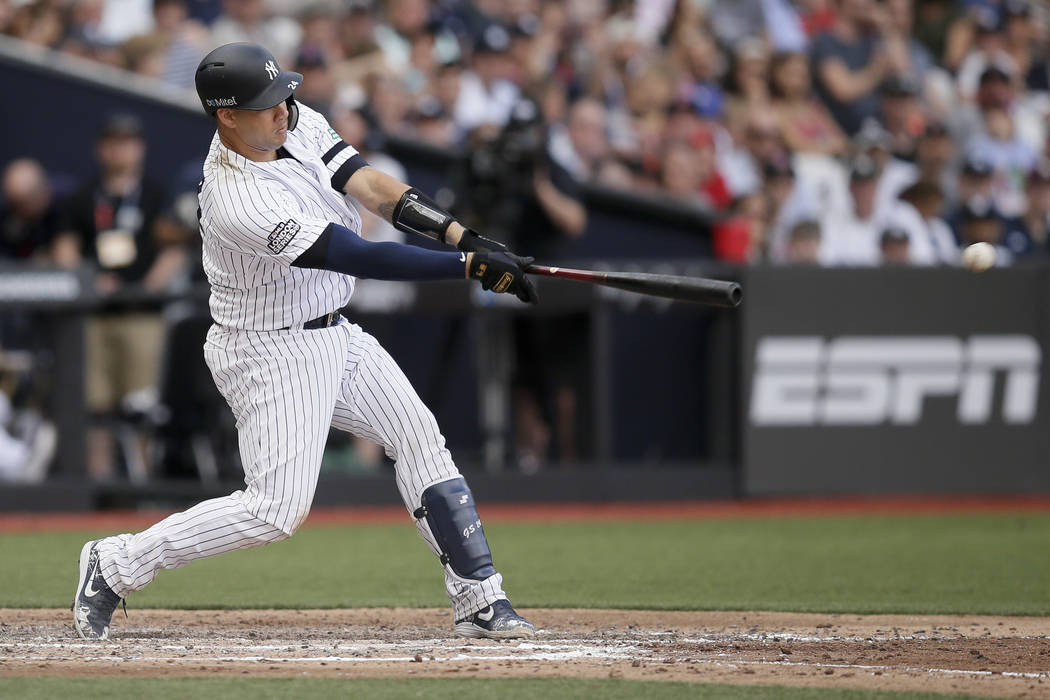 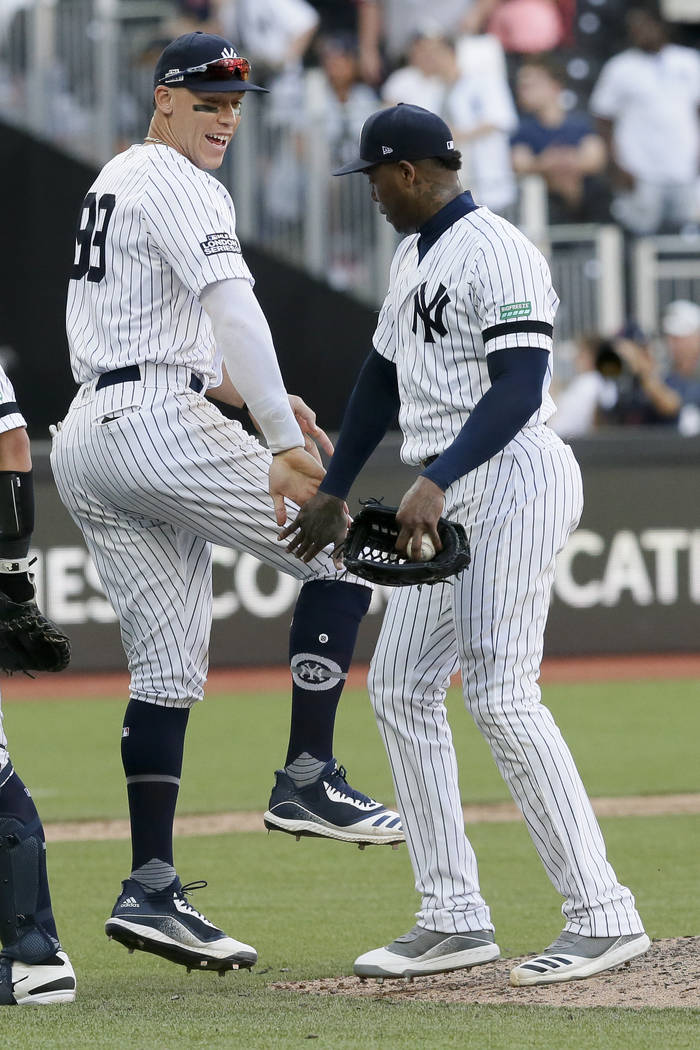 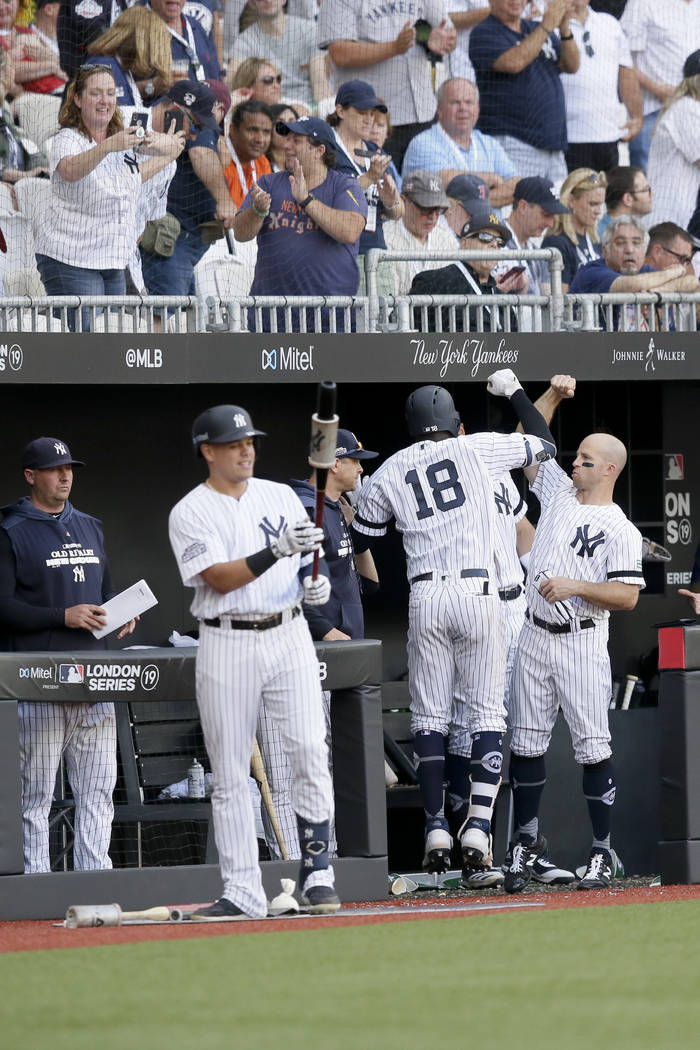 New York Yankees' Didi Gregorius (18) celebrates at the dugout after a home run against the Boston Red Sox during the sixth inning of a baseball game in London, Sunday, June 30, 2019. (AP Photo/Tim Ireland) 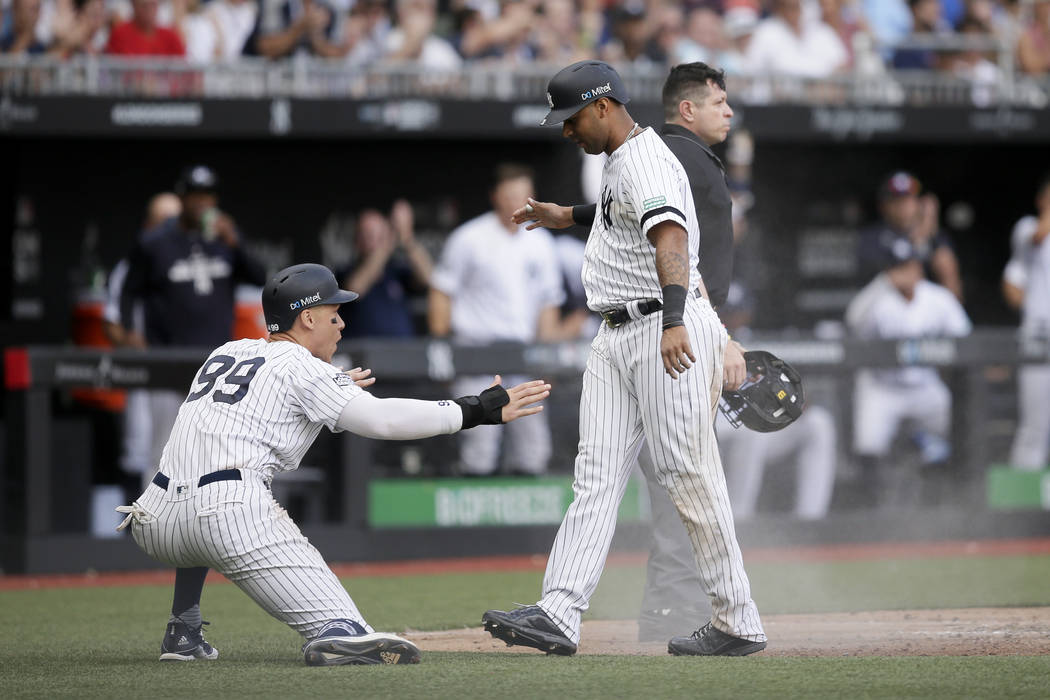 New York Yankees' Aaron Judge, left, and Aaron Hicks celebrate after scoring on a single by Gary Sanchez during the seventh inning of a baseball game against the Boston Red Sox in London, Sunday, June 30, 2019. (AP Photo/Tim Ireland)

LONDON — Britain loves tradition, and the New York Yankees wrapped up Major League Baseball’s first trip to Europe with one of their sport’s customs: a late-inning pinstriped comeback.

Gary Sánchez hit a go-ahead, two-run single in a nine-run seventh inning, and the Yankees overcome a four-run deficit to beat the Boston Red Sox 12-8 Sunday for a two-game sweep of the groundbreaking, high-scoring trek across the pond.

DJ LeMahieu doubled off Marcus Walden (6-1) leading off the seventh and hit a two-run double against Josh Taylor later in the inning as the Yankees opened an 11-4 lead, sending 14 batters to the plate in their highest-scoring inning in four years.

Didi Gregorius went deep against Ryan Brasier in the eighth, extending New York’s record streak of games with home runs to 31. Combined with the Yankees’ 17-13 win Saturday, the teams scored 50 runs on the weekend, four more than their previous scoring mark in consecutive games against each other.

Before a sellout crowd of 59,059 at Olympic Stadium, the defending champion Red Sox began brightly on the sunny afternoon in their alternate red jerseys. Xander Bogaerts, J.D. Martinez and Christian Vázquez became the first trio of Boston batters in four decades to hit home runs in the first inning, banging and mashing to a 4-0 lead against Stephen Tarpley, who was making his first big league start.

But after a game that took 4 hours, 24 minutes — 18 minutes swifter than Saturday’s — Boston made a depressing Brexit. The World Series champions dropped a season-high 11 games behind the AL East-leading Yankees, who won for the 13th time in 14 games overall and improved to 6-1 against the Red Sox this year.

Adam Ottavino (3-2), the second of six New York relievers, got the win. After Boston rallied in the eighth on Vázquez’s two-run single off Chance Adams, Eduardo Núñez’s RBI double and Sam Travis’ run-scoring single against Zack Britton, Rafael Devers stranded the bases loaded with a groundout.

New York’s Old Chap — Aroldis Chapman — gave up a leadoff hit in the ninth, then struck out three in a row.

Built for the 2012 Olympics, the stadium was designed for minimal wind, leading some players to speculate that might have been a factor in pitchers’ difficulty locating breaking balls.

Pregame pomp and circumstance returned for an encore, but there was less of a crowd buzz. The temperature dropped to a more normal 73 degrees at first pitch — 20 below Saturday’s scorcher. Batters at times struggled to see pitches sailing through the sun and shade created by Olympic Stadium’s roof and famous triangular light banks.

Boston homered three times in the opening inning for just the sixth time and the first since Aug. 14, 1979, when Carl Yastrzemski, Carlton Fisk and Fred Lynn did it at Fenway Park off Minnesota’s Pete Redfern.

New York closed in the second on Gio Urshela’s RBI groundout and Brett Gardner’s run-scoring single, But Eduardo Rodriguez showed the more “normal” side of baseball and the Red Sox maintained their 4-2 lead into the sixth, when Colten Brewer got the final two outs. Boston’s bullpen then blew a save for the 17th time, second only to the New York Mets’ 21.

Walden allowed all four batters he faced to reach: He allowed LeMahieu’s double, walked Aaron Judge, gave up an RBI double to Aaron Hicks and then the single to Sánchez that put the Yankees ahead 5-4.

Urshela hit a two-run single off Matt Barnes, LeMahieu’s second double boosted the lead to 9-4, Hicks hit a sacrifice fly and Sánchez hit a grounder with English that bounced off the glove of Michael Chavis at first for a run-scoring error.