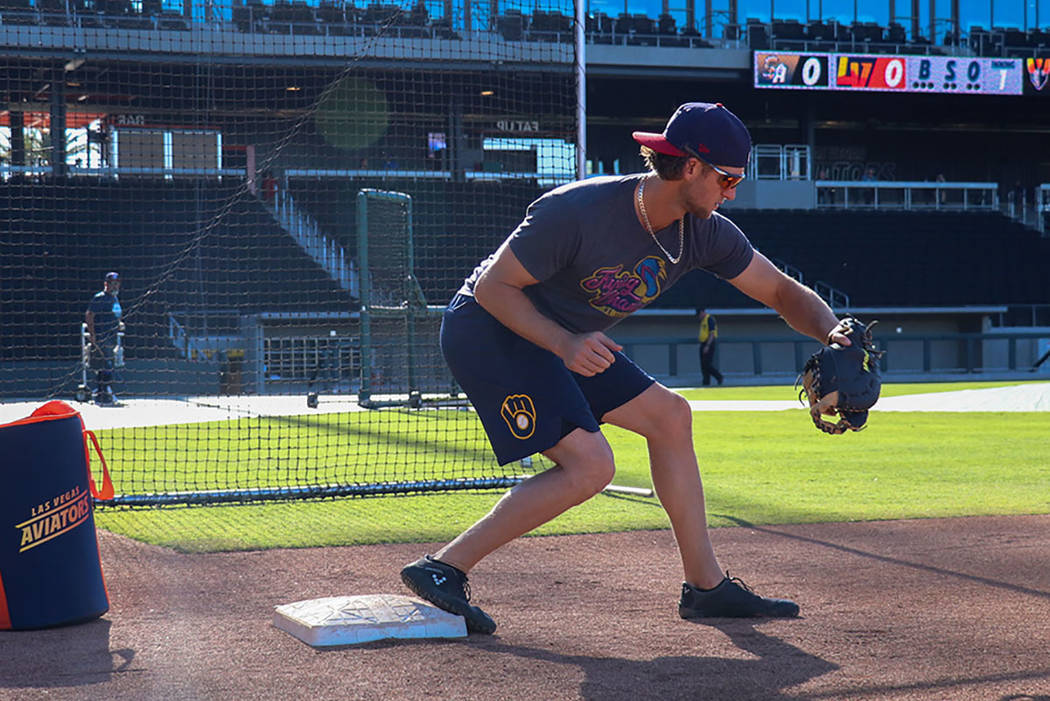 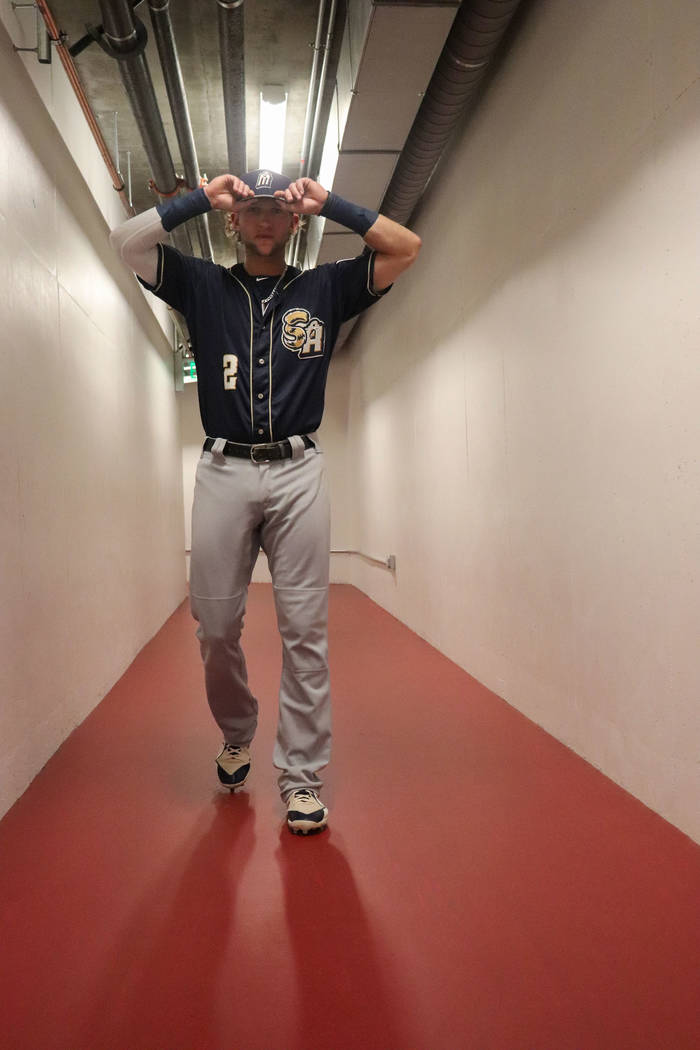 San Antonio infielder Jake Hager walks through the tunnel ahead of a game against the Aviators in Las Vegas, Saturday, June 8, 2019. Hager went 0-for-4 with a strikeout in a 5-2 Missions win. (Terrel Emerson/Las Vegas Review-Journal)

The San Antonio Missions’ versatile veteran played shortstop, first base, third base and was expected to play in the outfield Monday when they wrap up a four-game series against the Aviators.

Hager is batting .243 with five home runs and 20 RBIs for the Milwaukee Brewers’ Triple-A affiliate. The chance to return and play in the Aviators’ new stadium brought back memories for the Henderson native.

“(Las Vegas Ballpark) is absolutely beautiful, they did everything right,” Hager said. “When I saw we were coming back to Vegas, I was so excited to play in this new ballpark. I mean, it’s unbelievable. And especially in this city, you couldn’t have picked a better spot to build this park.”

Hager’s stellar numbers — a .547 batting average, 11 home runs, 57 RBIs and 22 doubles as a Sierra Vista senior — earned him the 2011 Nevada Gatorade Player of the Year award. In high school, Hager also helped his team improve its record every year, resulting in a 108-30 overall record, and led the Mountain Lions to four straight state tournament appearances.

“I have so many memories from back there, but probably those long practices – early Saturday mornings,” Hager recalled. “Just the everyday grind of being out there with my teammates, my coaches – they all helped me out so much. I can’t thank them enough. It was a blast there. I loved it.”

The Tampa Bay Rays took notice and made him the the 32nd overall pick in the 2011 draft.

“It all started back in seventh grade, when I tried out for Sierra Vista and that’s where I met (former Mountain Lions coach) Nate Selby,” Hager said. “Since Selby took me under his wing, he taught me how to take my lunch pale to work everyday.”

He climbed the ranks from rookie ball to Triple A in the Rays’ organization, before signing with the Brewers as a free agent. Along the way, Hager has learned to deal with an ever-changing league.

Having played almost every position, Hager and San Antonio manager Rick Sweet agree catcher might be the only spot he probably couldn’t play.

“I remember going into rookie ball and just being with a bunch of older guys,” Hager said. “But the pace of the game, each level you go up the game gets much faster. It becomes a chess game.”

Sweet has taken special notice of how Hager has dealt with the process of maturing as a player.

“He plays the game the right way, number one,” he said.

Various homecomings are nothing new to Sweet, who has participated in one as a player himself.

“I know the experience, it builds in you, you’re excited about it and you want to impress everybody,” he said. “But it adds extra pressure and sometimes you get out of your game trying to do too much.”

However, Sweet did guarantee Hager would play in front of some familiar hometown faces. But Hager struggled through the first three games against the Aviators, going 1-for-11 with an RBI, a walk and three strikeouts.