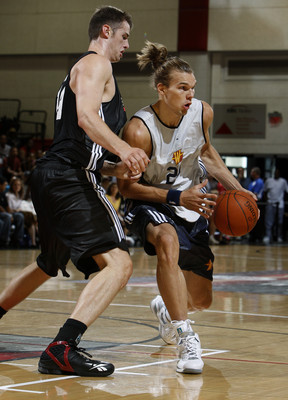 Louis Amundson probably was hoping his summer league days were over. But participation is a must for borderline players like Amundson as they try to prove they belong in the NBA.

The 6-foot-9-inch former UNLV forward, who spent last season as a reserve with Philadelphia, is seeking a spot with the Golden State Warriors.

“I hadn’t really thought much about it,” Amundson said of still being in the summer league. “You just roll with the punches and move on.”

He logged six points and eight rebounds in a 96-89 win over the 76ers on Friday as the NBA Summer League tipped off at Cox Pavilion, with Golden State coach Don Nelson watching from the stands.

Amundson appeared in 16 games last season for Philadelphia, averaging 1.1 points and 4.4 minutes. He has 27 games of NBA experience in two years.

“I think Golden State’s a good fit for me because of their style of play,” Amundson said. “I feel like I’m at the top of my game right now. My jump shot’s really improved, and I got a lot of experience going through an entire NBA season and the playoffs.

“My only disappointment was I didn’t get to play more. It’s hard to get better when you’re sitting all the time. But I tried to make the most of my opportunities (in Philadelphia), and I think I’m good enough to stay in the league.”

• LAKERS FALL — The Los Angeles Lakers were manhandled by the Detroit Pistons on opening day, 84-73.

Detroit, paced by Rodney Stuckey’s 21 points, led by as many as 18 points in the fourth quarter. Former Brigham Young center Trent Plaisted added 10 points and five rebounds in 23 minutes off the bench for the Pistons.

• D-LEAGUE INFLUENCE — The NBA’s Development League is a perfect breeding ground for summer league rosters. This year, 83 players on the 21 teams in Las Vegas have D-League experience.

• LINE OF THE DAY — Former Colorado State center Jason Smith had the oddest stat line of the day. The Philadelphia 76ers forward finished with 11 points and 10 personal fouls along with nine rebounds.

Summer league rules disqualify a player after his 10th foul.