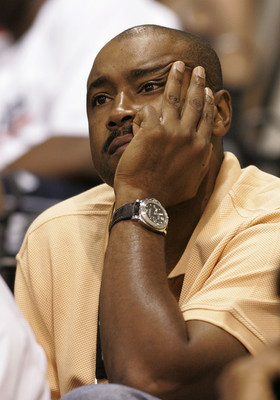 In their four-year existence in the NBA, the Charlotte Bobcats have been a nonfactor.

General manager Rod Higgins is trying to change that culture.

He shuffled the deck on his bench, replacing Sam Vincent with veteran Larry Brown. He picked up an extra first-round pick in last month’s draft to bolster his roster. He even decided to change the Bobcats’ summer league destination from Orlando, Fla., to Las Vegas.

In Charlotte, change is considered a good thing. And given the team has a .332 winning percentage since it entered the NBA in 2004-05, it can’t hurt to go in a different direction.

“This is our fifth year as a franchise, and we’re trying to build through the draft and do it the right way,” Higgins said as he watched his team defeat the Los Angeles Clippers 81-66 in its NBA Summer League debut Saturday at Cox Pavilion. “For us, being here in Vegas is probably more important than most teams because we’re so young and we’re building for the future.”

Sitting with Brown and player personnel director Buzz Peterson, Higgins had to like what he saw from D.J. Augustin, the 6-foot point guard from Texas whom the Bobcats selected with the ninth pick at last month’s draft.

Augustin, who left the Longhorns after two years, played with confidence and got better as he got more comfortable on the floor. He finished with 14 points but had only two assists.

“I started out a little slowly, but I was able to settle down,” Augustin said. “I think we’ve got a lot of talent here, and I’m glad to be in Charlotte.”

Along with Augustin, the Bobcats are counting on 7-foot French center Alexis Ajinca, whom they used their 20th pick on, and second-round selection Kyle Weaver, to contribute sooner rather than later.

While preaching patience to the fans is easy, it’s harder to sell that notion to the team’s managing member of basketball operations.

That would be Michael Jordan. Patience is not one of his virtues, and he wants the Bobcats to move on a faster track toward respectability.

It was one of the reasons Brown was brought on board, to see if he could extract the most out of the talent on hand before he suffers another flameout and moves on.

Brown didn’t want to be interviewed Saturday but made a brief assessment of Augustin before leaving the Cox.

“He’s going to be special,” Brown said. “I really liked what I saw.”

Saturday was the first time he saw Augustin in a game setting. The Bobcats never worked out Augustin before the draft, never brought him in for a personal interview.

It appeared that Augustin would go to Portland, which had worked him out and liked him.

But Higgins, Peterson and the rest of the Bobcats’ staff believed they had done enough homework on Augustin to draft him at No. 9.

“I was a little surprised they took me given I didn’t work out for them,” Augustin said. “But I’m glad I’m here. I’ll learn a lot from Coach Brown. He’s a great coach and a proven winner.”

Higgins said this week in Las Vegas will go a long way toward helping the franchise move in the right direction.

“We wanted a little different atmosphere, a place where the competition is always going to be there,” Higgins said. “We were ready for a change.”