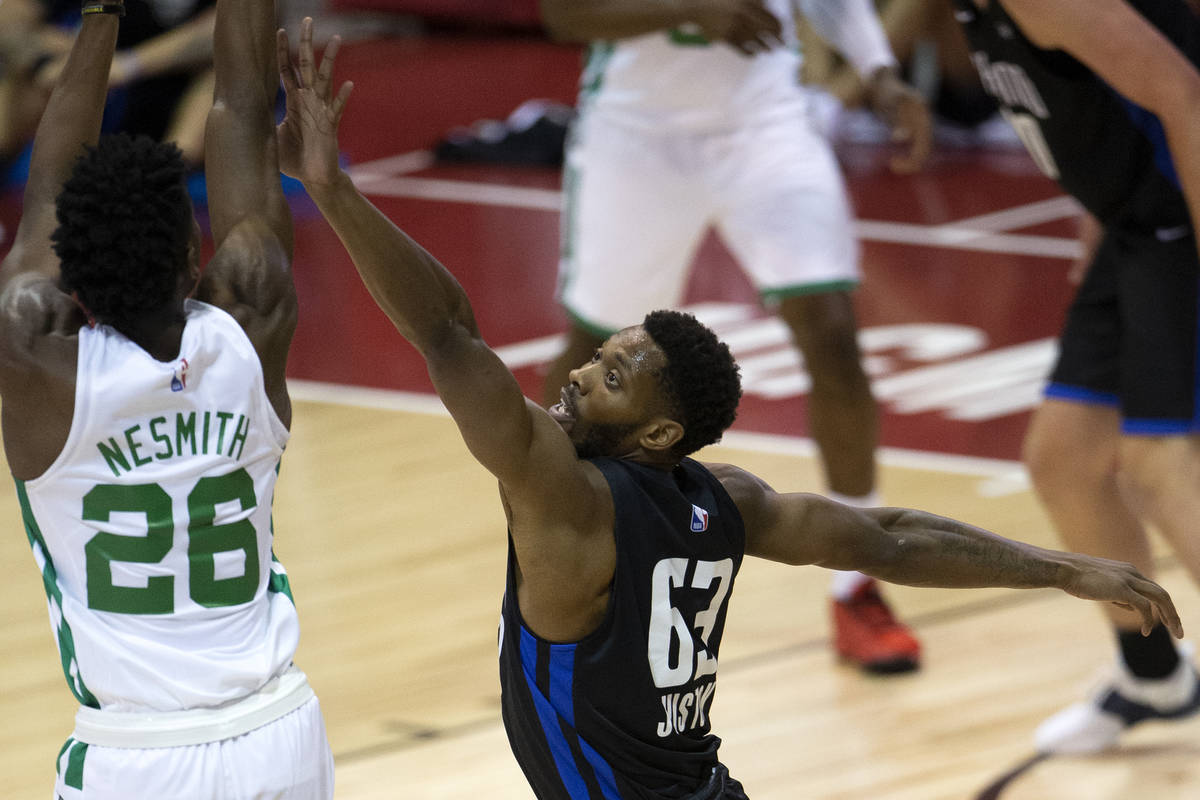 Orlando Magic forward Shakur Juiston (63) attempts to knock down a shot by Boston Celtics forward Aaron Nesmith (26) during the second half of an NBA Summer League basketball game at the Cox Pavilion on Thursday, Aug. 12, 2021, in Las Vegas. Juiston played for UNLV during his college basketball career. (Ellen Schmidt/Las Vegas Review-Journal) @ellenschmidttt 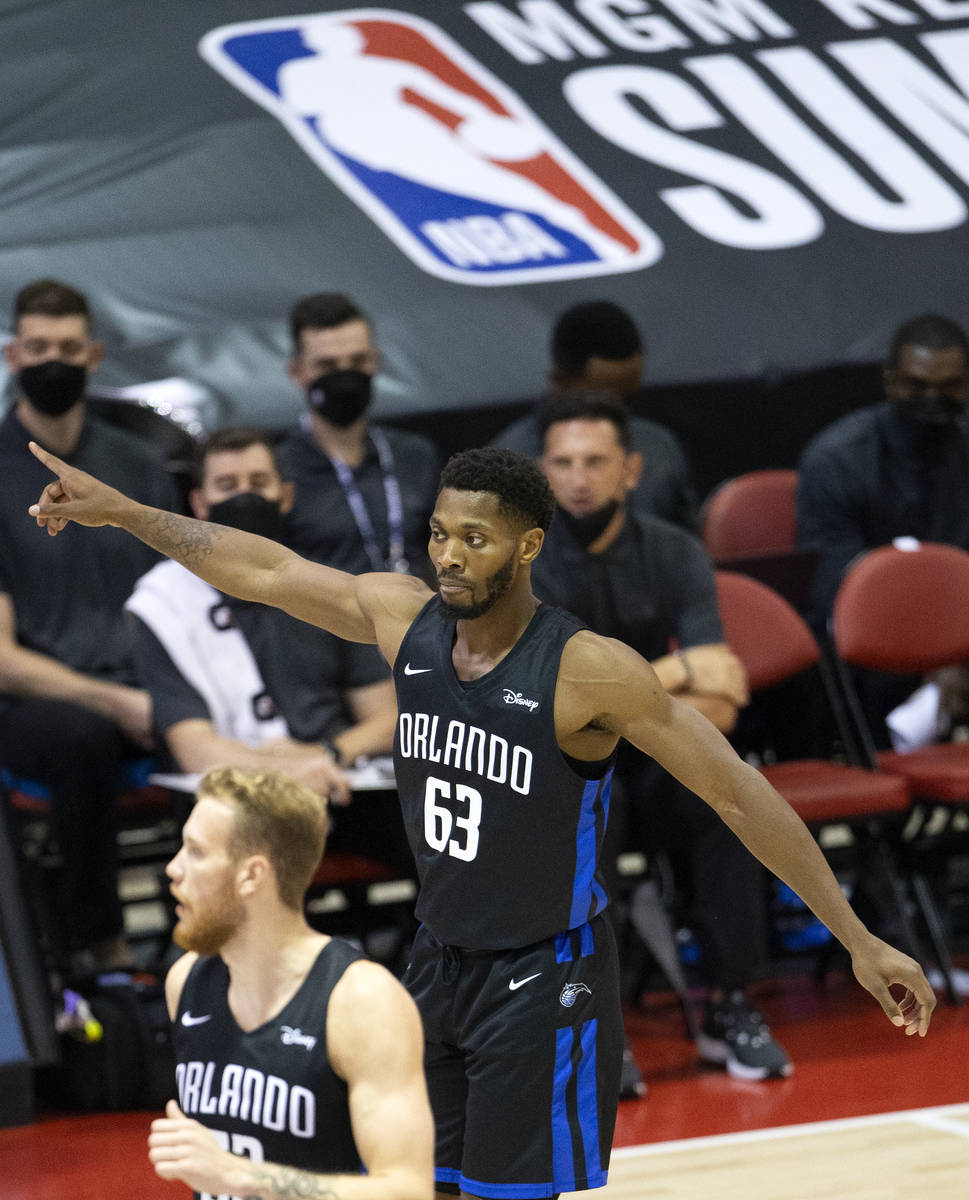 Orlando Magic forward Shakur Juiston (63) signals to teammates during the second half of an NBA Summer League basketball game against the Boston Celtics at the Cox Pavilion on Thursday, Aug. 12, 2021, in Las Vegas. Juiston played for UNLV during his college basketball career. (Ellen Schmidt/Las Vegas Review-Journal) @ellenschmidttt 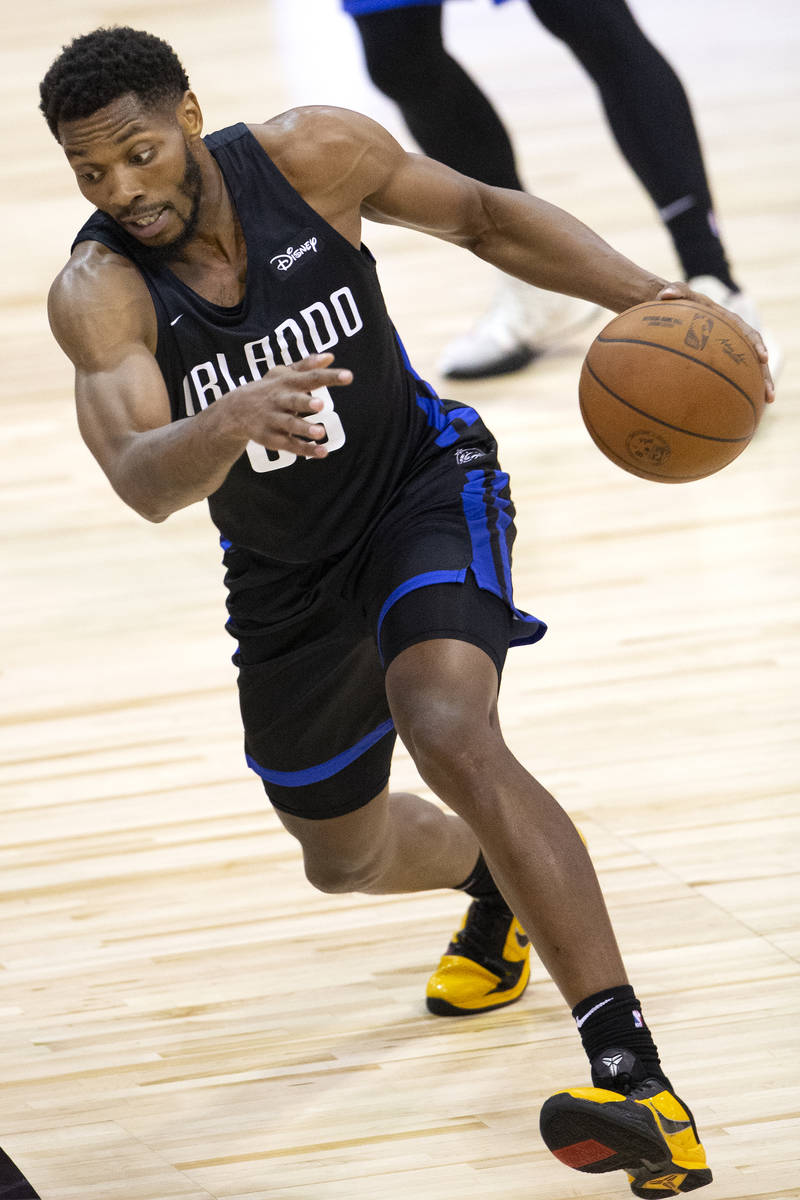 Orlando Magic forward Shakur Juiston (62) dribbles down the court during the second half of an NBA Summer League basketball game against the Boston Celtics at the Cox Pavilion on Thursday, Aug. 12, 2021, in Las Vegas. Juiston played for UNLV during his college basketball career. (Ellen Schmidt/Las Vegas Review-Journal) @ellenschmidttt 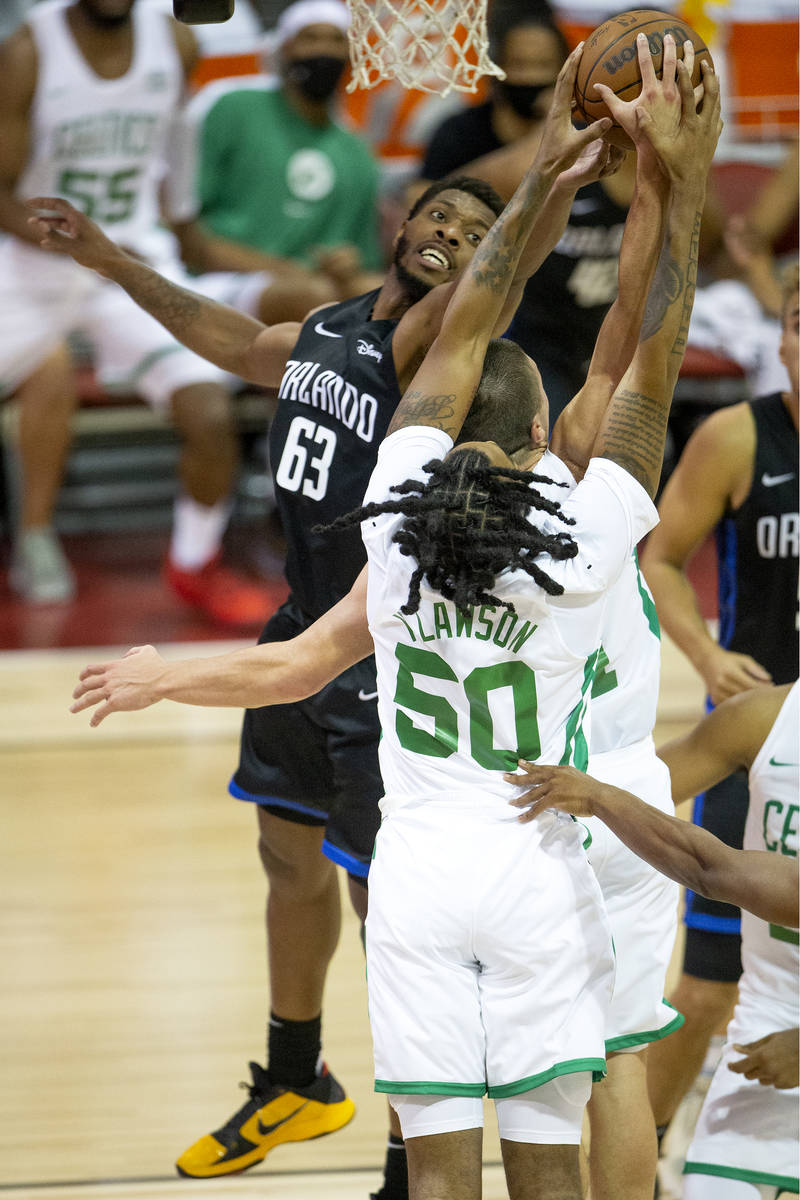 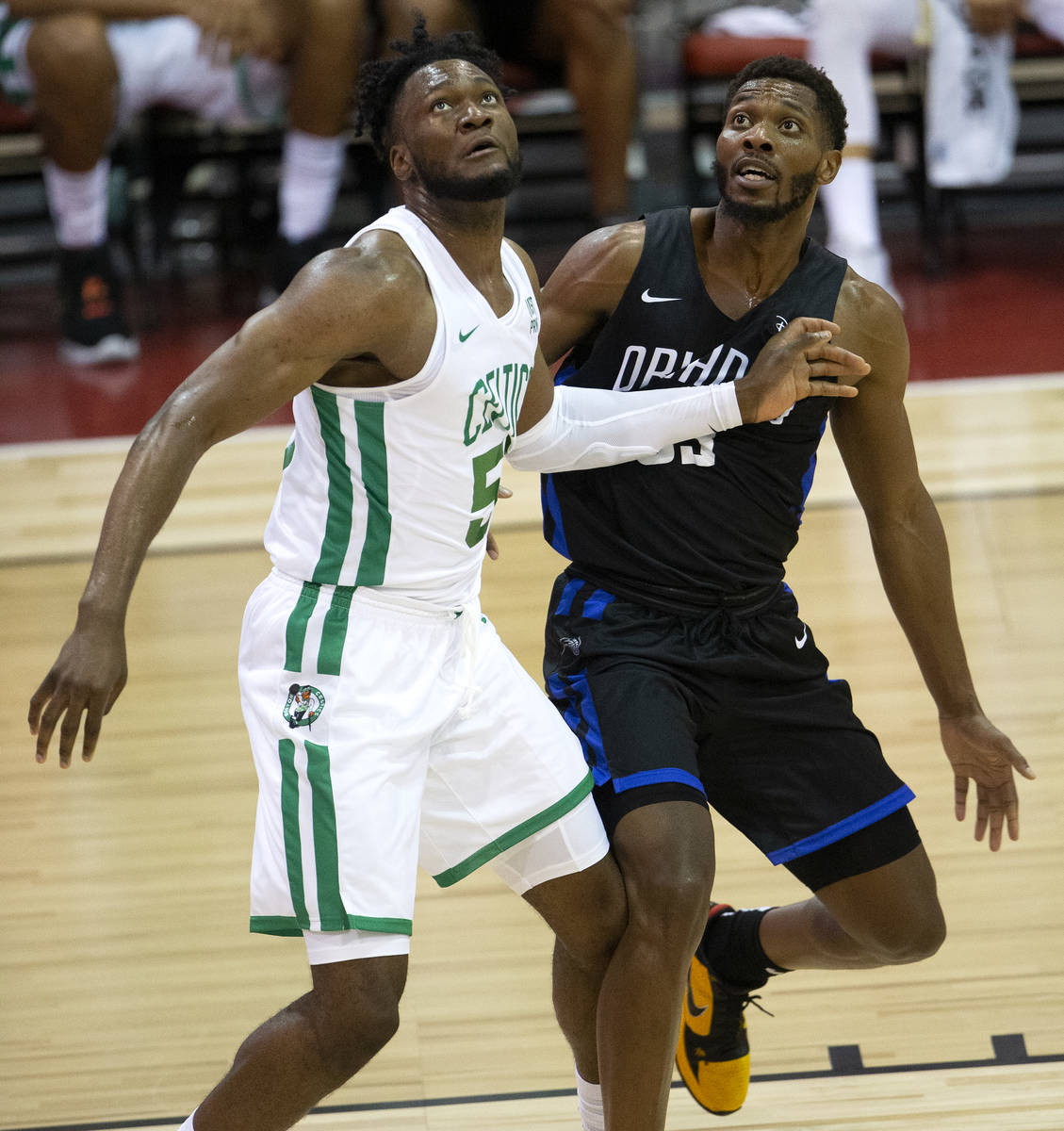 Shakur Juiston sat on the bench after an Orlando Magic practice earlier this week fondly remembering how the UNLV crowds yelled, “Juuuuuuuice!” after he grabbed defensive rebounds or scored.

His signature move after making such a play was to kiss his middle and index fingers and raise them to the Thomas & Mack Center roof.

But as Juiston sat there reminiscing, he also made it clear those days are long past. He crossed himself and did the signature two-fingers kiss and point, and said, “Rest in peace, my man Juice. He passed away.”

He thought for a second.

“But, no, that’s one thing I really miss — the crowd, the atmosphere,” Juiston said.

Juiston went from a national junior college player of the year to a fan favorite and double-double machine at UNLV to leading Oregon with 6.3 rebounds per game on the Ducks’ 2020 Pac-12 Conference championship team.

Then the pandemic shutdown happened just as Oregon was about to compete for the conference tournament title and perhaps make a deep NCAA Tournament run. For Juiston, without the ability to attend workouts or participate in the Portsmouth Invitational Tournament for college, it also meant his pro career was much more uncertain.

The 6-foot-7-inch forward signed with the Memphis Grizzlies’ G League team in February and played in four games, averaging 6.8 minutes.

Now with the Magic, Juiston is not only fighting with other players a year removed from college who didn’t get a Summer League audition last year, but true rookies as well. Double the players searching for roster spots crammed together at the Thomas & Mack Center and Cox Pavilion.

“I joke with a lot of people and say, ‘I’m the 25-year-old rookie,’” Juiston said. “But it’s a blessing. I’m not going to sit here and shortchange myself because it’s a good thing to be here.”

Juiston knows he is auditioning not only for the Magic, but the other 29 clubs. After not getting any playing time the first two games, Juiston played more than 10 minutes on Thursday against the Boston Celtics. He didn’t take a shot and finished with three rebounds and a steal.

Jamahl Mosley, who doubles as Orlando’s NBA and Summer League coach, said he has been impressed with what he’s seen in Juiston, but didn’t commit to any kind of plan for him.

“His energy is great,” Mosley said. “He works his tail off. I really enjoy watching him play. His activity in practice has been fantastic. He’s helping the young guys out that are working their way in. He does a really good job of being a pro, and he’s in the right spots the majority of time with his defensive effort.”

Mosley said it was too early to say if Juiston would need to start the season with the Magic’s G League team in Lakeland, Florida.

Whatever happens, Juiston keeps showing up every day and giving his all.

Few promises are made to 25-year-old rookies.

“They just want me to come in here and listen and pay attention and try to grasp things and be ready when my opportunity comes,” Juiston said.