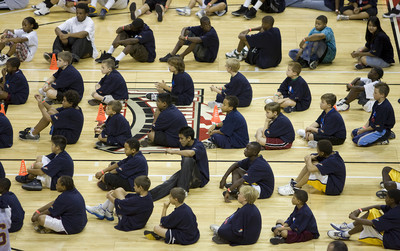 Conversation is simple when NBA players and local kids team up for the day.

Perched before a tray of chicken nuggets and Tater Tots, Phoenix Suns forward Alando Tucker craned his neck to hear an elementary school student seated next to him on the lunchroom bench.

The curious pair was linked Wednesday for an NBA Cares event at Hoggard Elementary School.

Tucker, along with three other NBA Summer League players and coaches, read and ate lunch with students at the school. The event tipped off a day’s worth of festivities.

Eight-year-old Marlon Burke jumped at the chance to attend a junior basketball clinic with some of the future stars.

The Las Vegas resident’s massive blue NBA T-shirt swung at his knees as he ran up and down the court at UNLV’s Thomas & Mack Center.

"I get to meet two new NBA players and play with my team and learn some new facts about basketball," Marlon said of his teammates and Portland Trail Blazers J.R. Pinnock and Morris Finley.

Marlon was among about 100 boys and girls who got a chance to meet the players, run drills and play basketball under the lights during the two-hour clinic.

Earlier in the day, audience participation was the name of the game at the elementary school reading event.

One by one, the kindergarten through fifth grade students — some of whom have special needs — jumped up and read portions of "If You Give a Mouse a Cookie" by Laura Joffe Numeroff.

"What better way to care than to show a child how to read or explain a book to them," said retired NBA player Spencer Haywood.

Haywood, Tucker and Detroit Pistons guard Arron Afflalo agreed that Dr. Seuss books were among their favorites when they were young.

As the dribbling quieted on the hardwood at the Thomas & Mack, guard J.R. Pinnock, who is a father of three, said working with kids is rewarding for him.

"The summer league can get stressful when you’re thinking about playing time and making the team," he said. "These are things that remind you what the game really means."