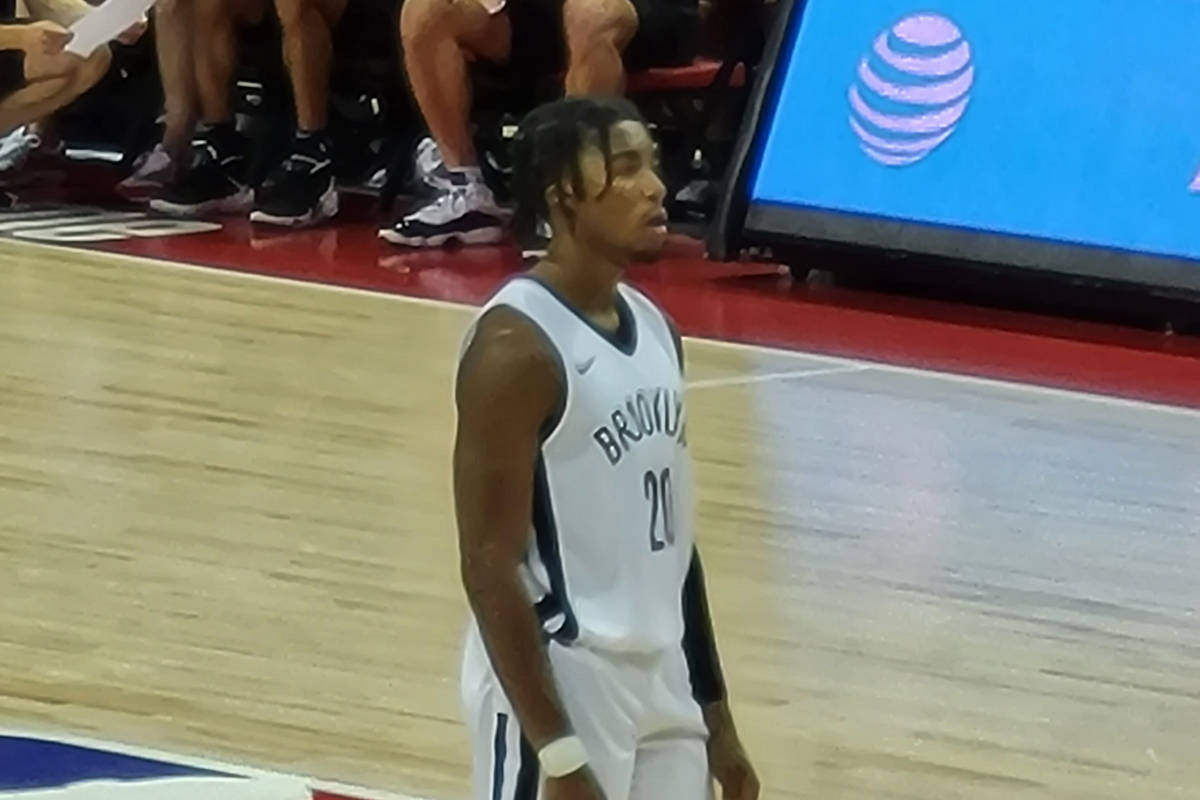 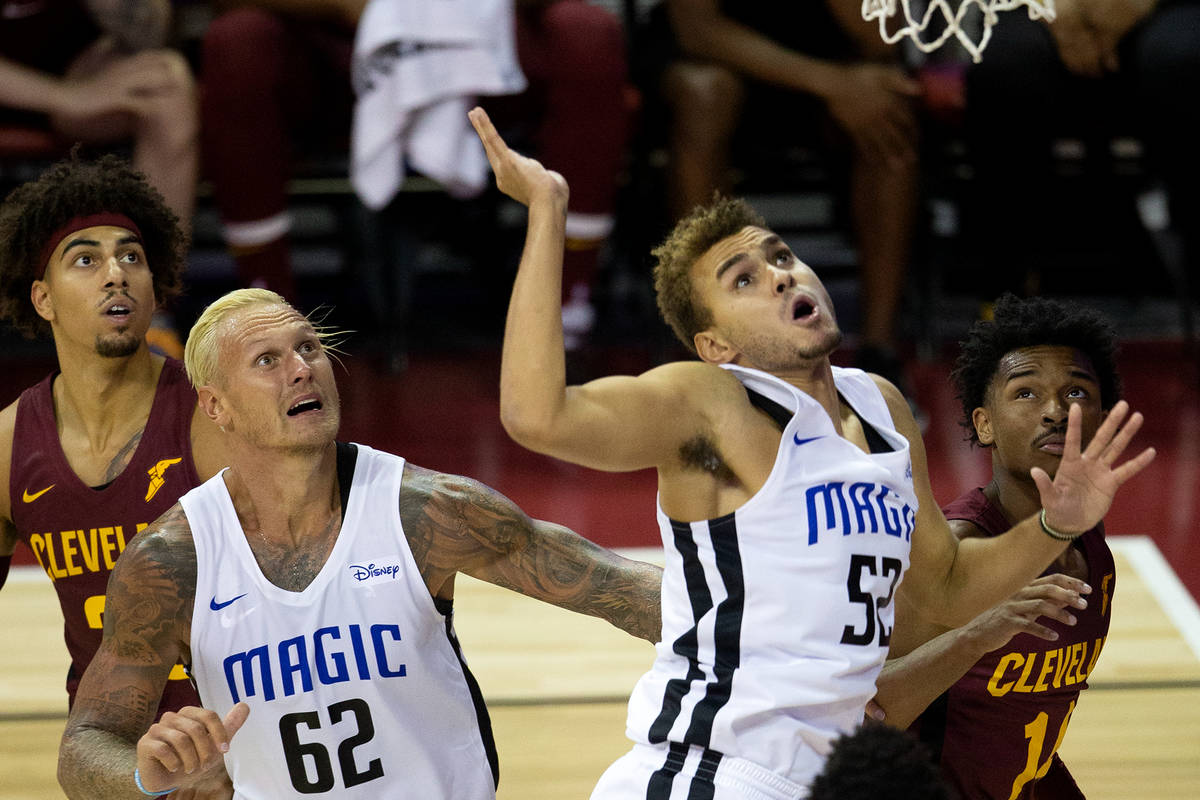 Orlando Magic forward Janis Timma (62) and forward D.J. Hogg (52) watch to see if their point went in the hoop while Cleveland Cavaliers guard Brodric Thomas, left, and fuard Jaylen Hands, right, look on during the second half of an NBA Summer League basketball game at the Thomas & Mack Center on Wednesday, Aug. 11, 2021, in Las Vegas. (Ellen Schmidt/Las Vegas Review-Journal) @ellenschmidttt 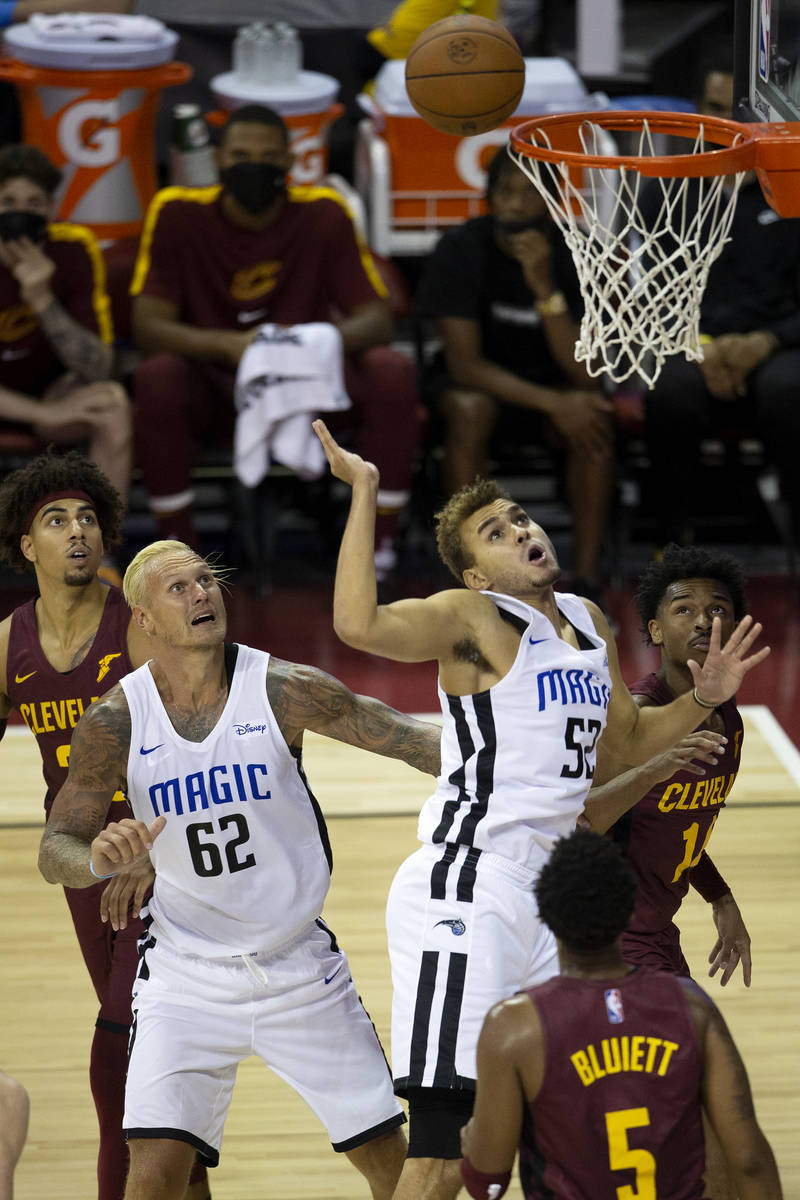 Orlando Magic forward Janis Timma (62) and forward D.J. Hogg (52) watch to see if their point went in the hoop while Cleveland Cavaliers guard Brodric Thomas, left, and fuard Jaylen Hands, right, look on during the second half of an NBA Summer League basketball game at the Thomas & Mack Center on Wednesday, Aug. 11, 2021, in Las Vegas. (Ellen Schmidt/Las Vegas Review-Journal) @ellenschmidttt

Warriors stars Stephen Curry and Draymond Green sat together in the Thomas & Mack Center while Golden State played the Toronto Raptors. Green wore his gold medal from the Olympic Games in Tokyo, but the bottle of LeBron James’ tequila he drank from on the team bus was nowhere to be seen.

Jazz part-owner Dwyane Wade, who is rumored to have played some basketball back in the day, took in Utah’s game against the Dallas Mavericks at Cox Pavilion. No word on where the Mavs owner was Wednesday night, but Mark Cuban’s wallet is considerably lighter these days after signing Luka Doncic to a $207 million extension.

Knicks coach Tom Thibodeau and team president Leon Rose as well as Lakers general manager Rob Pelinka watched their teams play each other in the late game at the Thomas & Mack.

The Heat’s Tyler Herro watched his team play the Memphis Grizzlies at Cox.

Your name is what?

One of the rookies on the Nets is David Duke Jr.

That is not a typo.

The junior part makes it clear that is a family name, but not that family. This Duke has nothing to do with the former Ku Klux Klan leader.

Duke was asked about his name following a recent Nets practice.

“I’ll use this whole thing as motivation to me,” he said, according to the New York Post. “One day when you look it up, it’s just going to be me and not the other dude.”

Maybe one day that will be the case. Duke is trying to make the Nets’ G League team mostly on defense, but against the Bucks on Wednesday, he scored 10 points.

Magic guard Cole Anthony finally is getting his Summer League experience after missing out last year because of the COVID-19 shutdown. He played in the same Thomas & Mack building where his dad, Greg, has his No. 50 hanging from the rafters.

But Anthony isn’t the only notable Magic player getting his first critical look at Summer League.

There’s a rookie who has drawn his share of attention, 29-year-old forward Janis Timma.

Timma was taken last in the 2013 draft by the Memphis Grizzlies, who traded their rights to him to Orlando two years later. Even so, the Latvia native remained overseas where he played professionally.

Now he’s in Las Vegas, and in two games Timma has totaled 19 points and 10 rebounds.

When asked if he had a point to prove, Timma said his focus was on playing the game.

Max Strus scored 32 points and had nine rebounds to lead the Heat to a double-overtime victory over the Grizzlies. Once a game goes into double overtime, it becomes sudden death. Strus pulled up from 25 feet to bury his seventh 3-pointer of the game and give the Heat the victory.