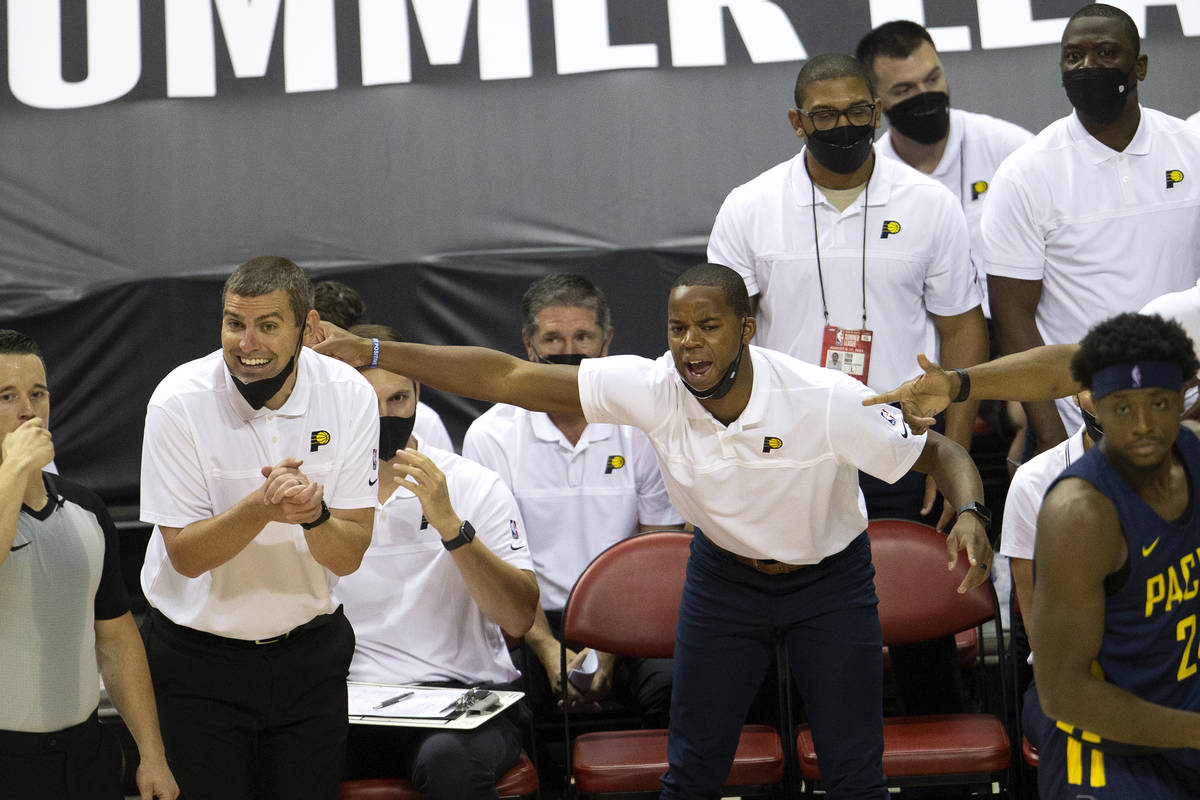 Members of the Indiana Pacers coaching staff, including head coach Mike Weinar, left, express anger toward a referee during the second half of an NBA Summer League basketball game against the Portland Trail Blazers at the Thomas & Mack Center on Thursday, Aug. 12, 2021, in Las Vegas. (Ellen Schmidt/Las Vegas Review-Journal) @ellenschmidttt 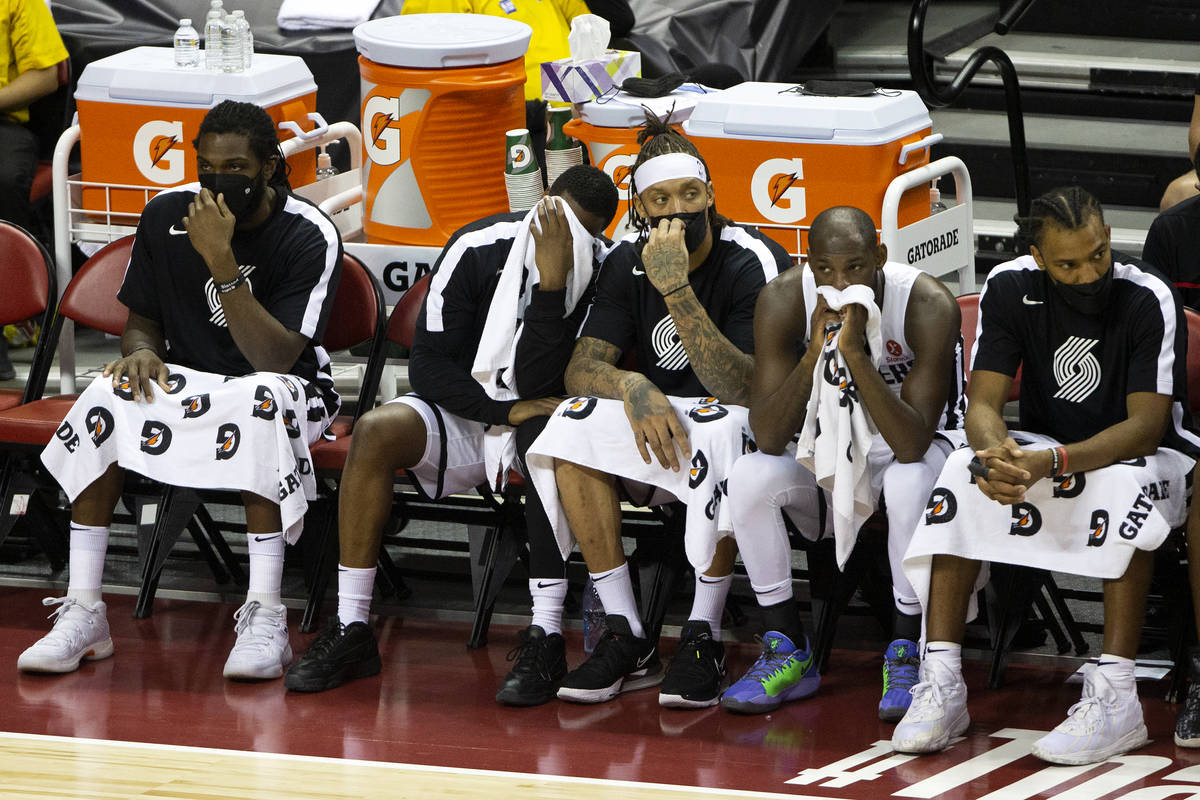 Portland Trail Blazers players, including Kenneth Faried, left, Emmanuel Mobiay, second from left, and Michael Beasley, third from left, watch the final seconds of their game against the Indiana Pacers during the second half of an NBA Summer League basketball game at the Thomas & Mack Center on Thursday, Aug. 12, 2021, in Las Vegas. (Ellen Schmidt/Las Vegas Review-Journal) @ellenschmidttt 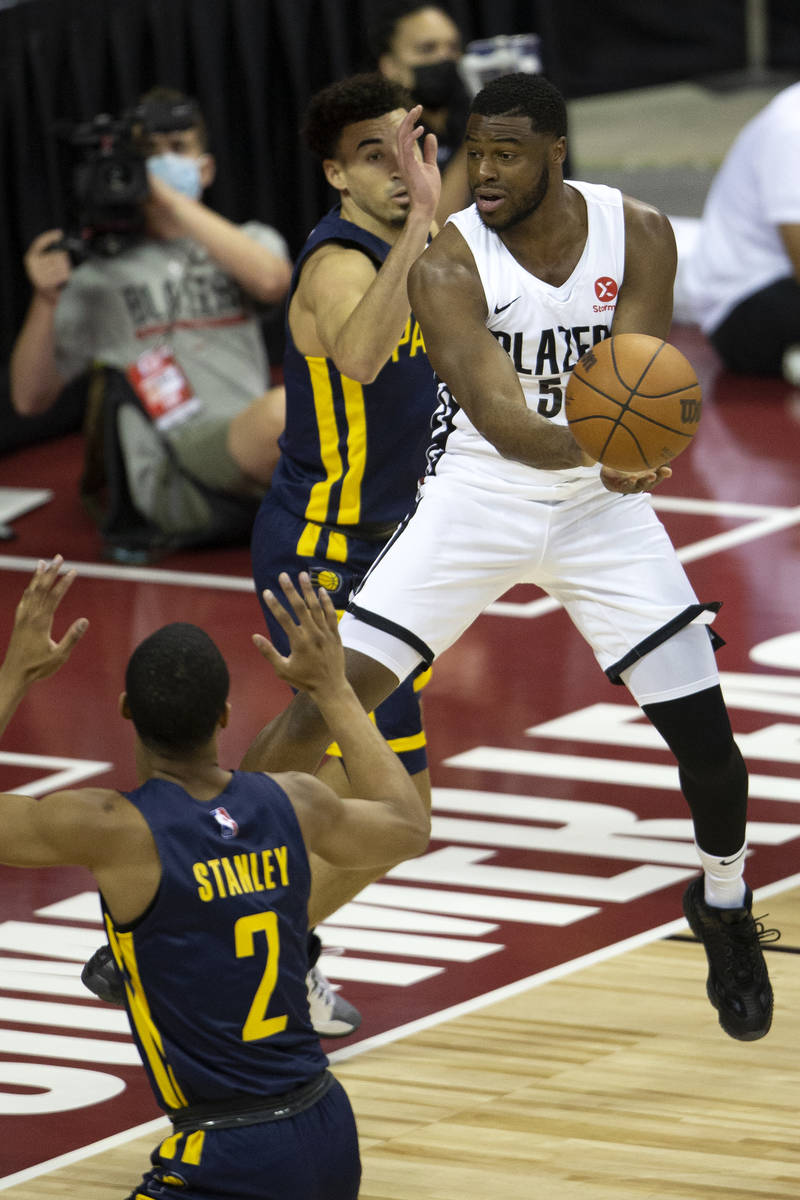 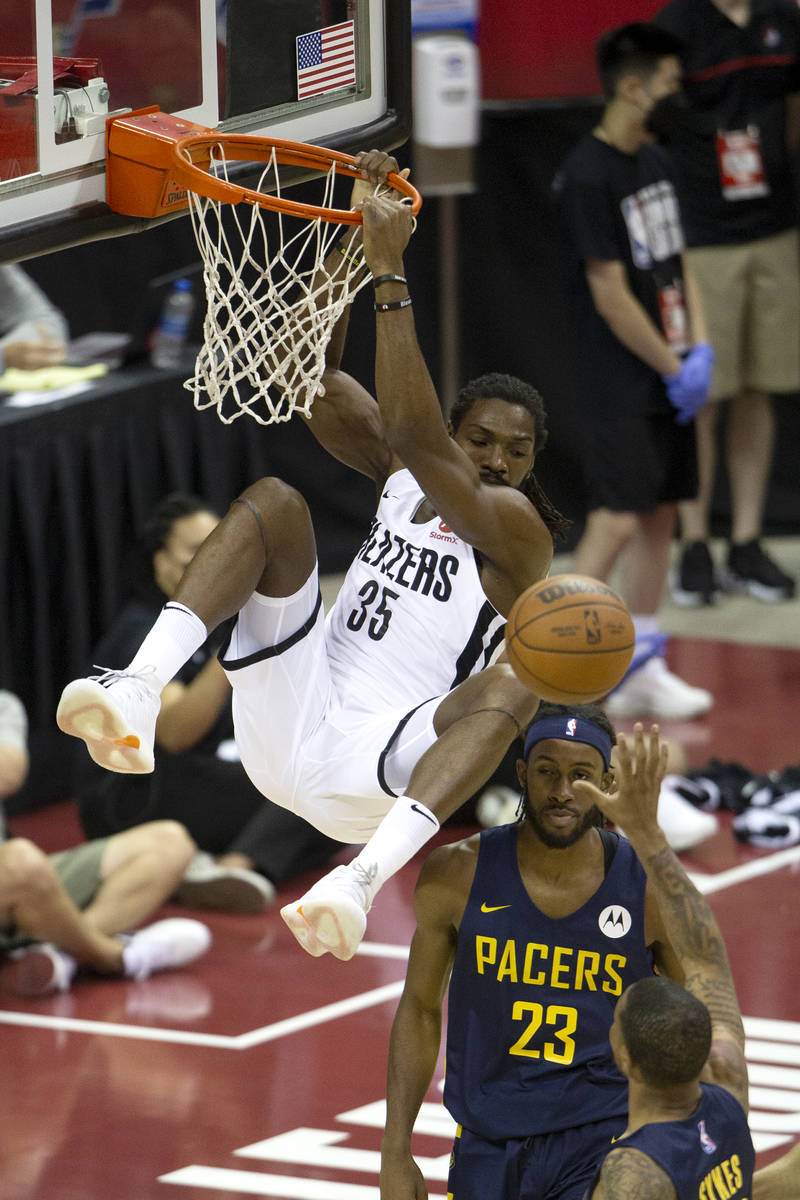 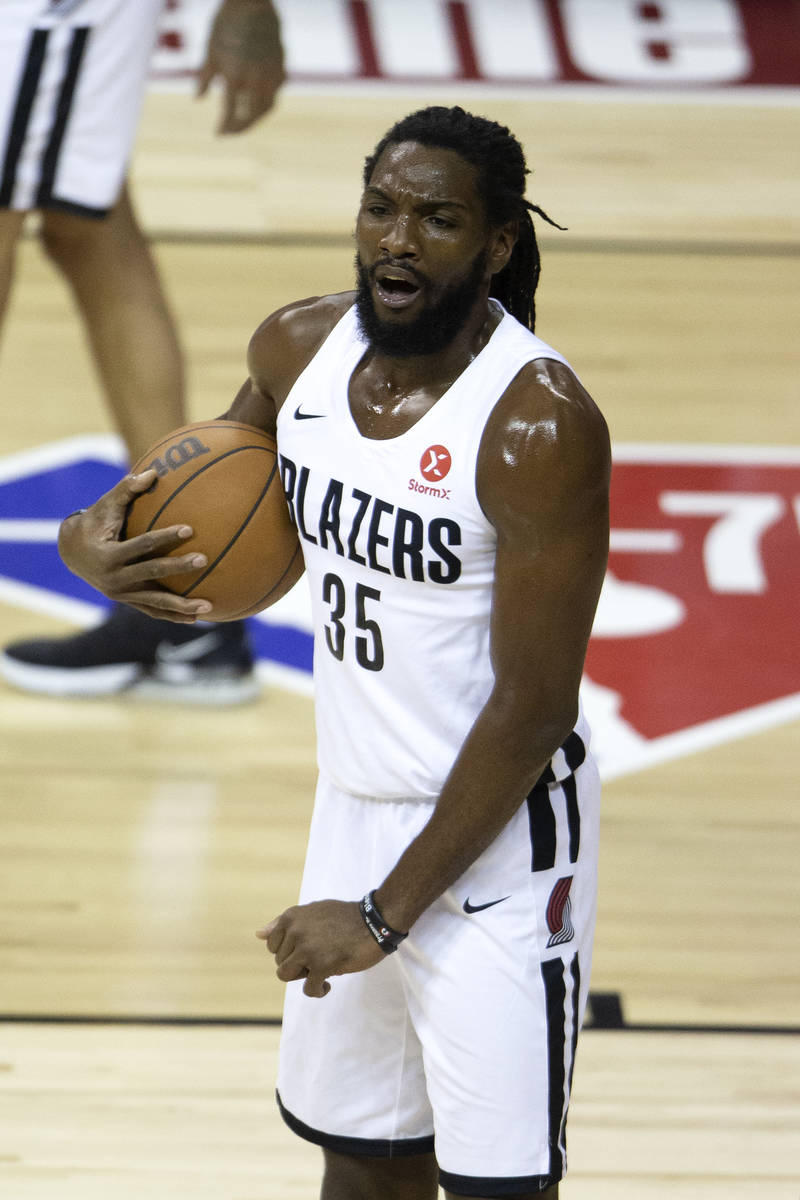 Portland Trail Blazers forward Kenneth Faried (25) reacts to a referee's call during the first half of an NBA Summer League basketball game against the Indiana Pacers at the Thomas & Mack Center on Thursday, Aug. 12, 2021, in Las Vegas. (Ellen Schmidt/Las Vegas Review-Journal) @ellenschmidttt 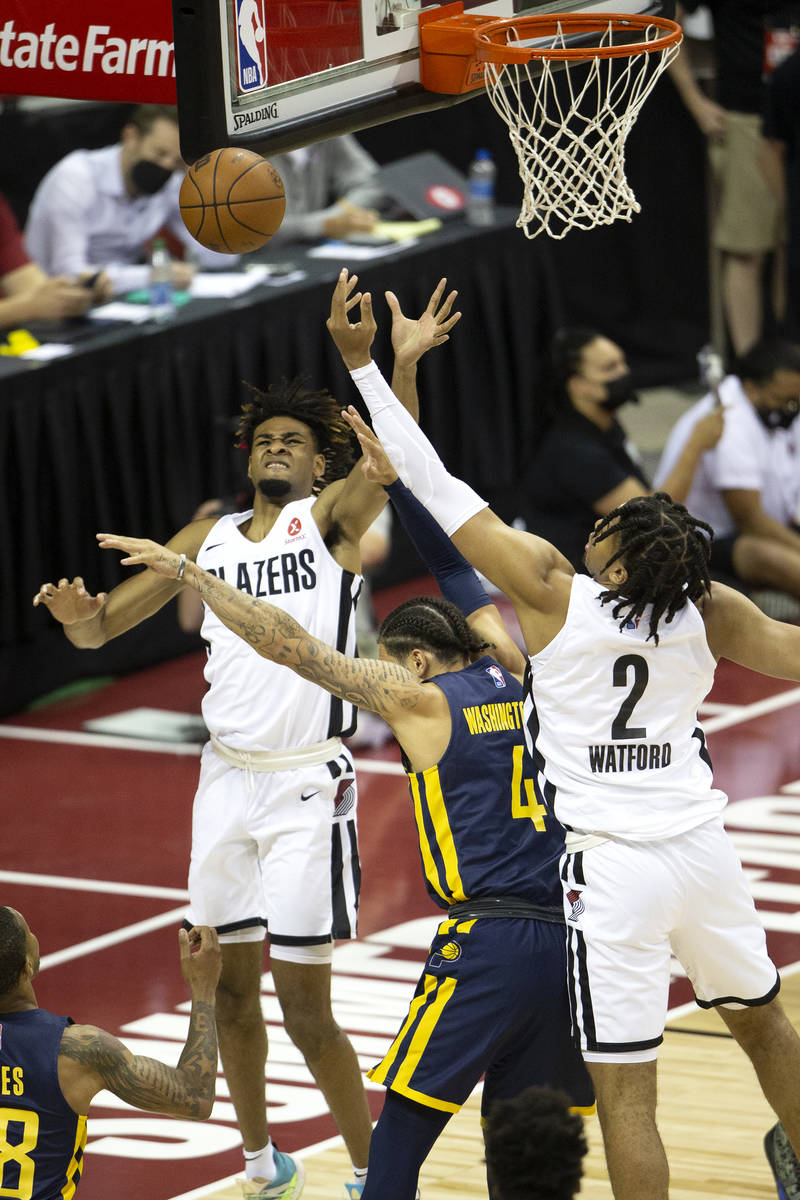 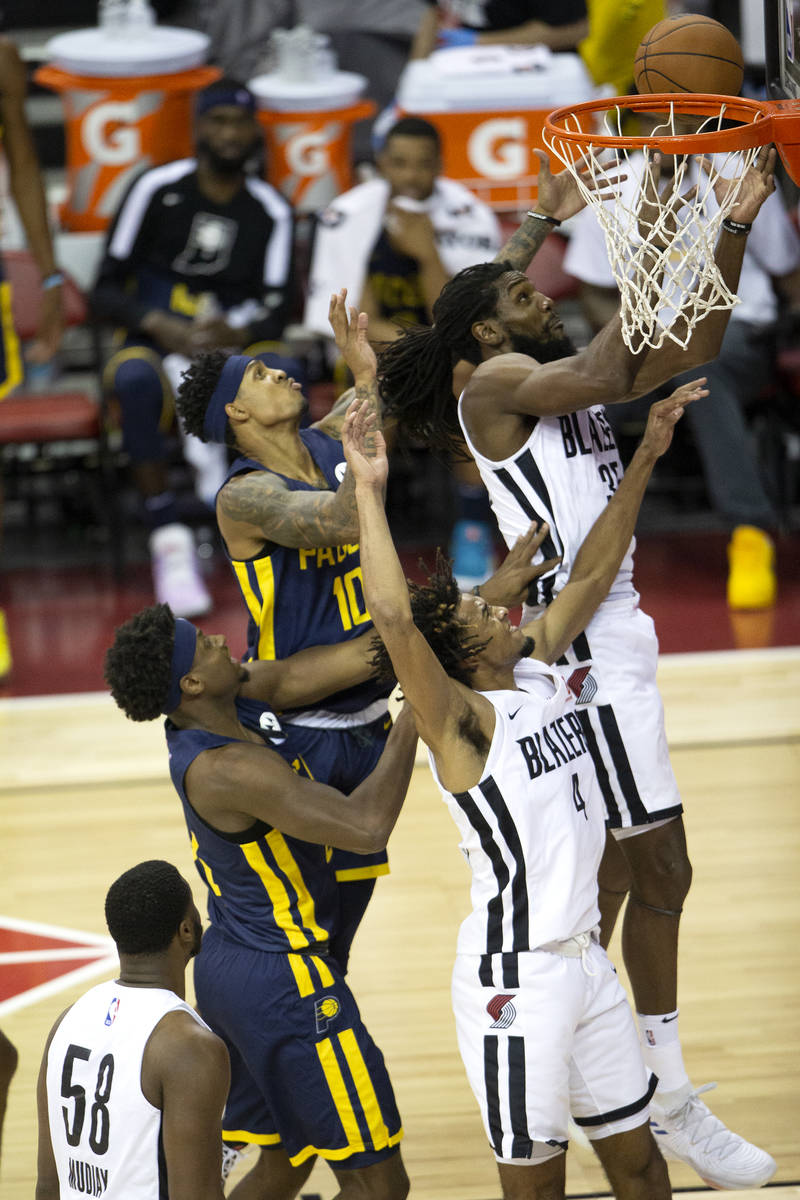 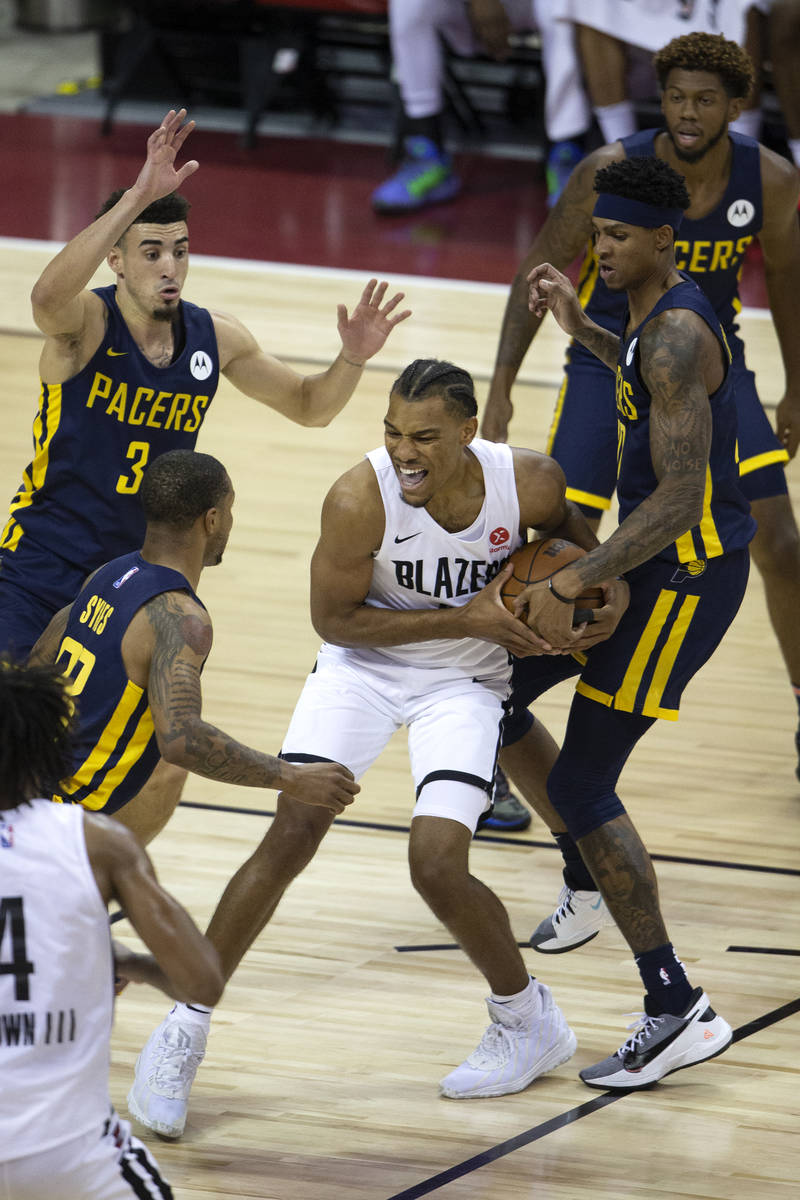 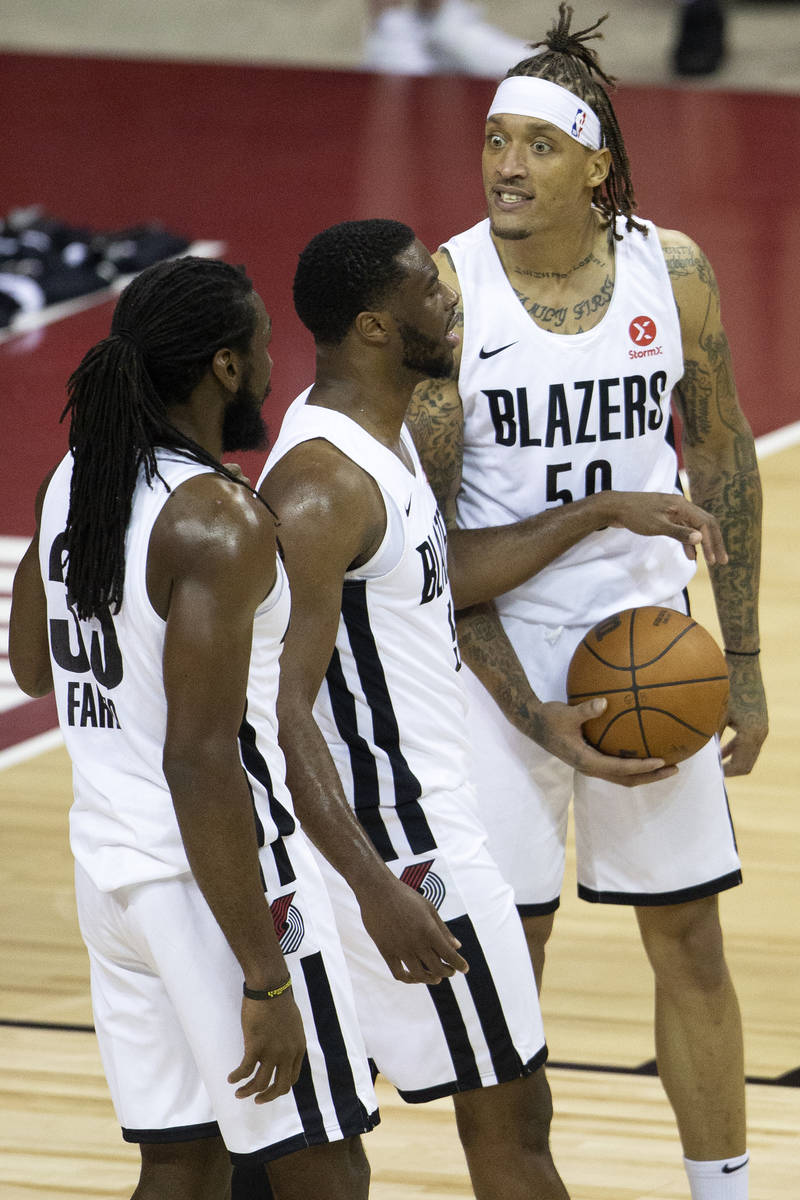 Portland Trail Blazers forward Michael Beasley (50) reacts to a referee's call next to his teammates forward Kenneth Faried, left, and guard Emmanuel Mudiay, center, during the first half of an NBA Summer League basketball game against the Indiana Pacers at the Thomas & Mack Center on Thursday, Aug. 12, 2021, in Las Vegas. (Ellen Schmidt/Las Vegas Review-Journal) @ellenschmidttt 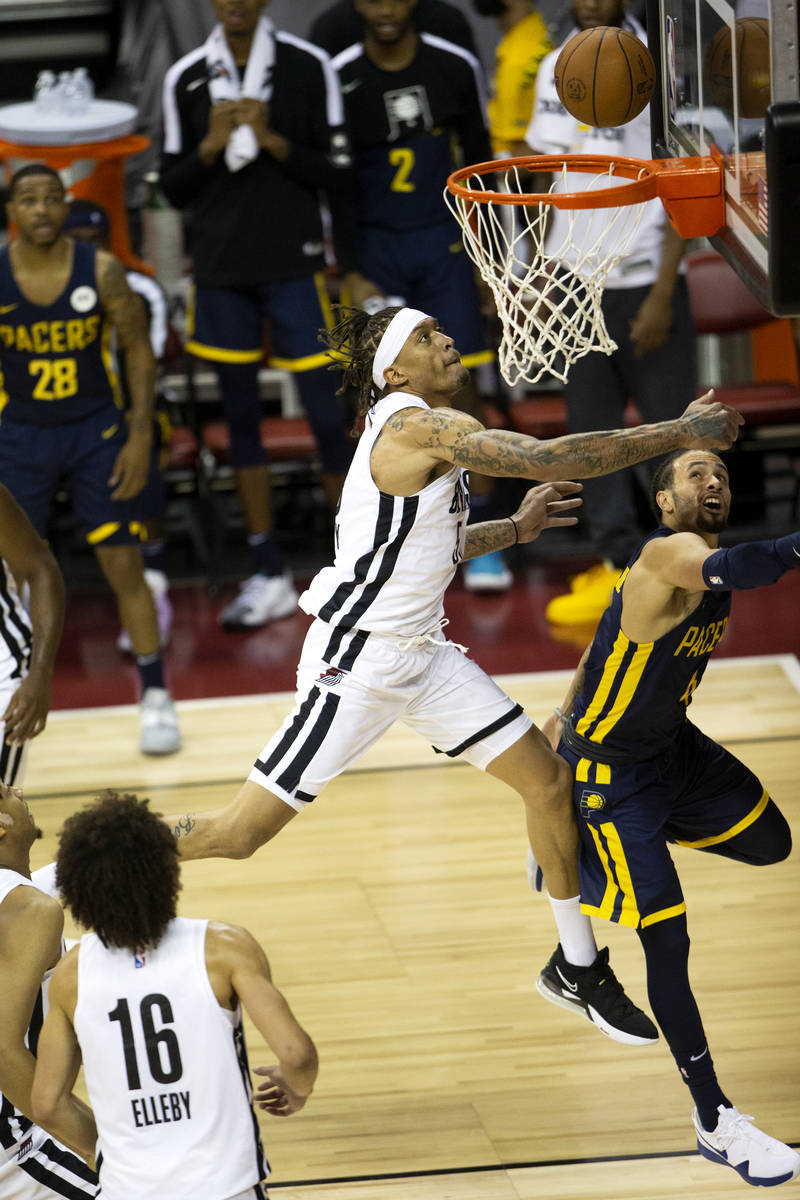 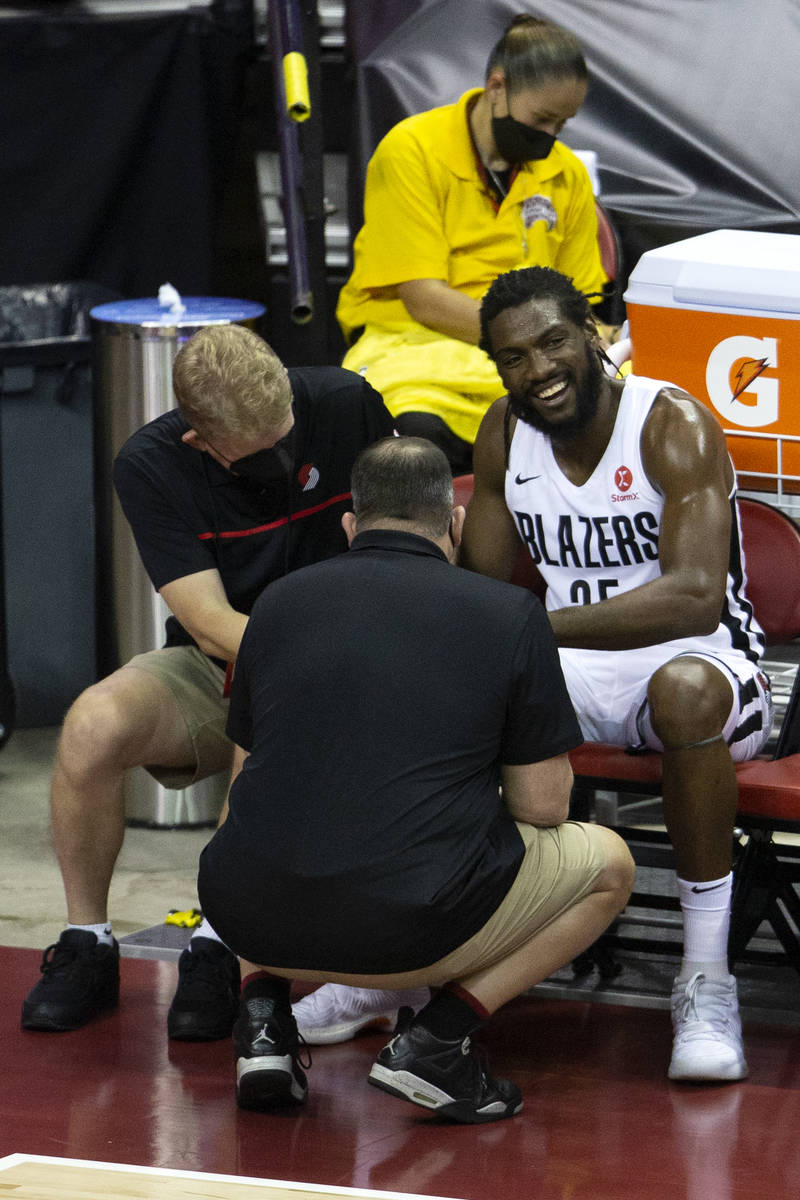 Portland Trail Blazers forward Kenneth Faried (50) is attended to by trainers after getting injured while dunking during the second half of an NBA Summer League basketball game against the Indiana Pacers at the Thomas & Mack Center on Thursday, Aug. 12, 2021, in Las Vegas. (Ellen Schmidt/Las Vegas Review-Journal) @ellenschmidttt 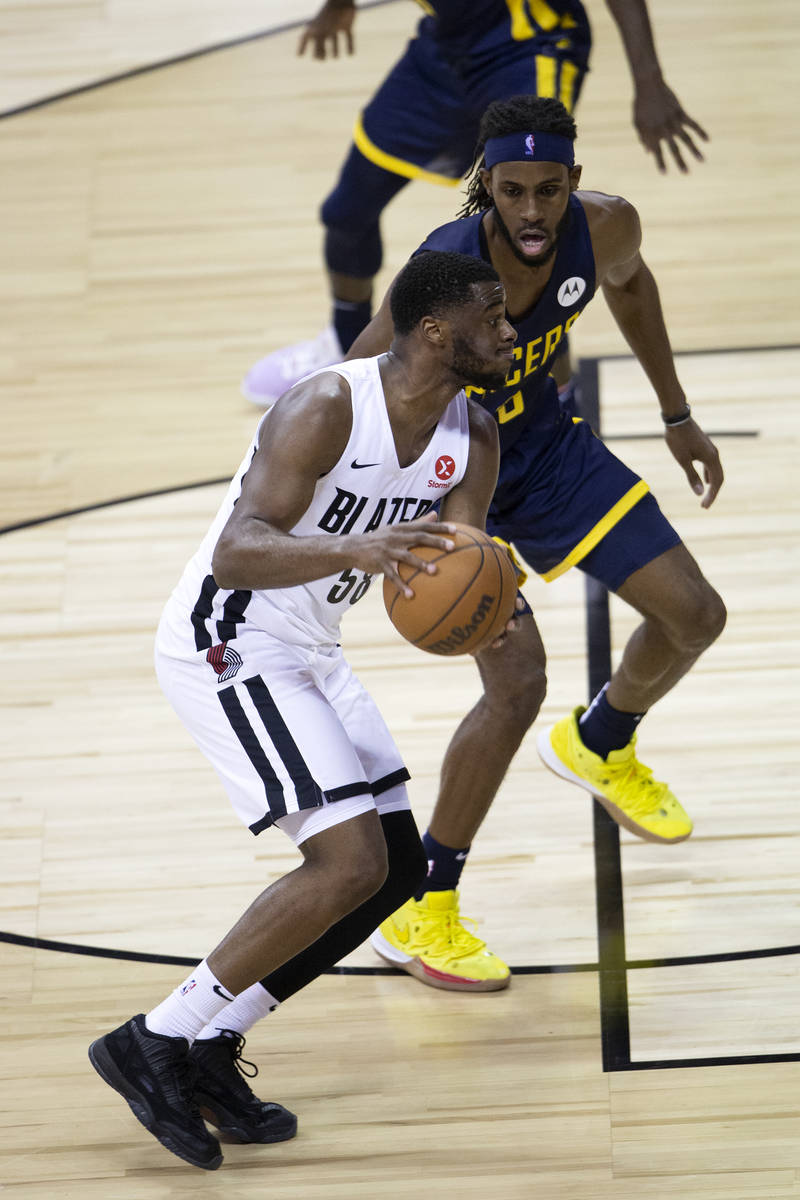 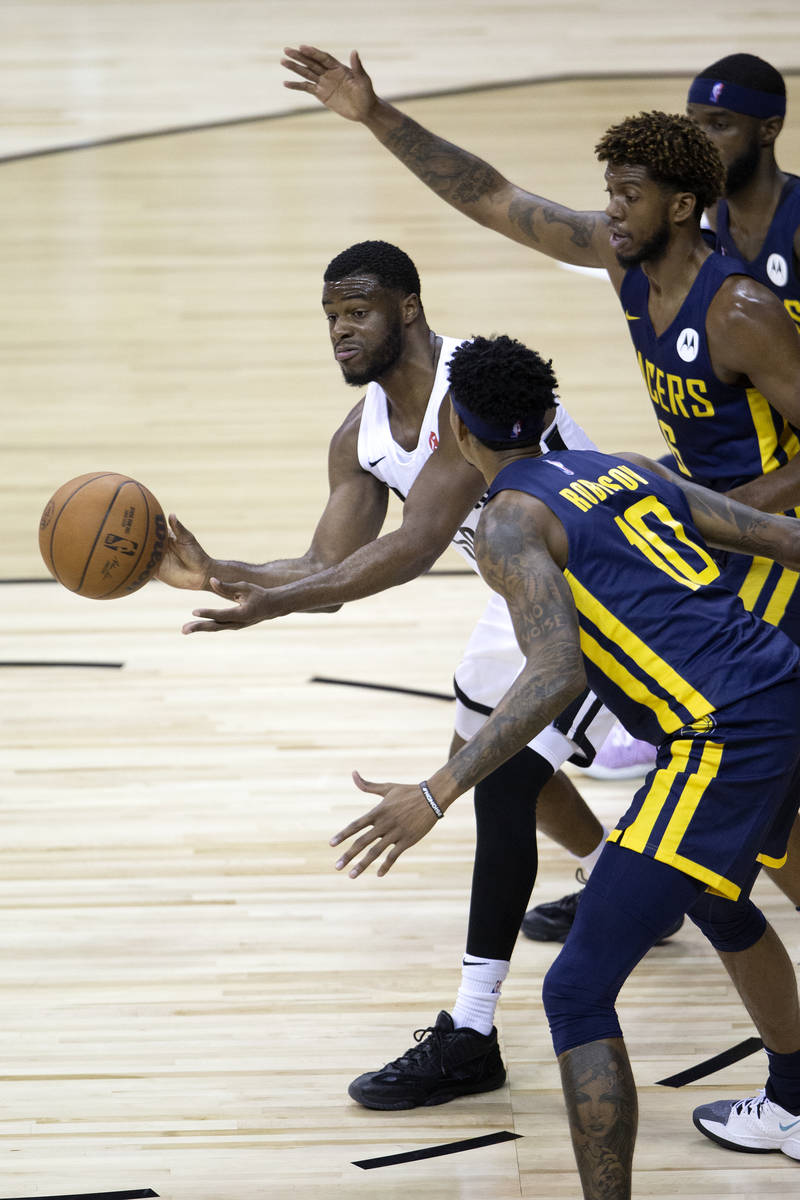 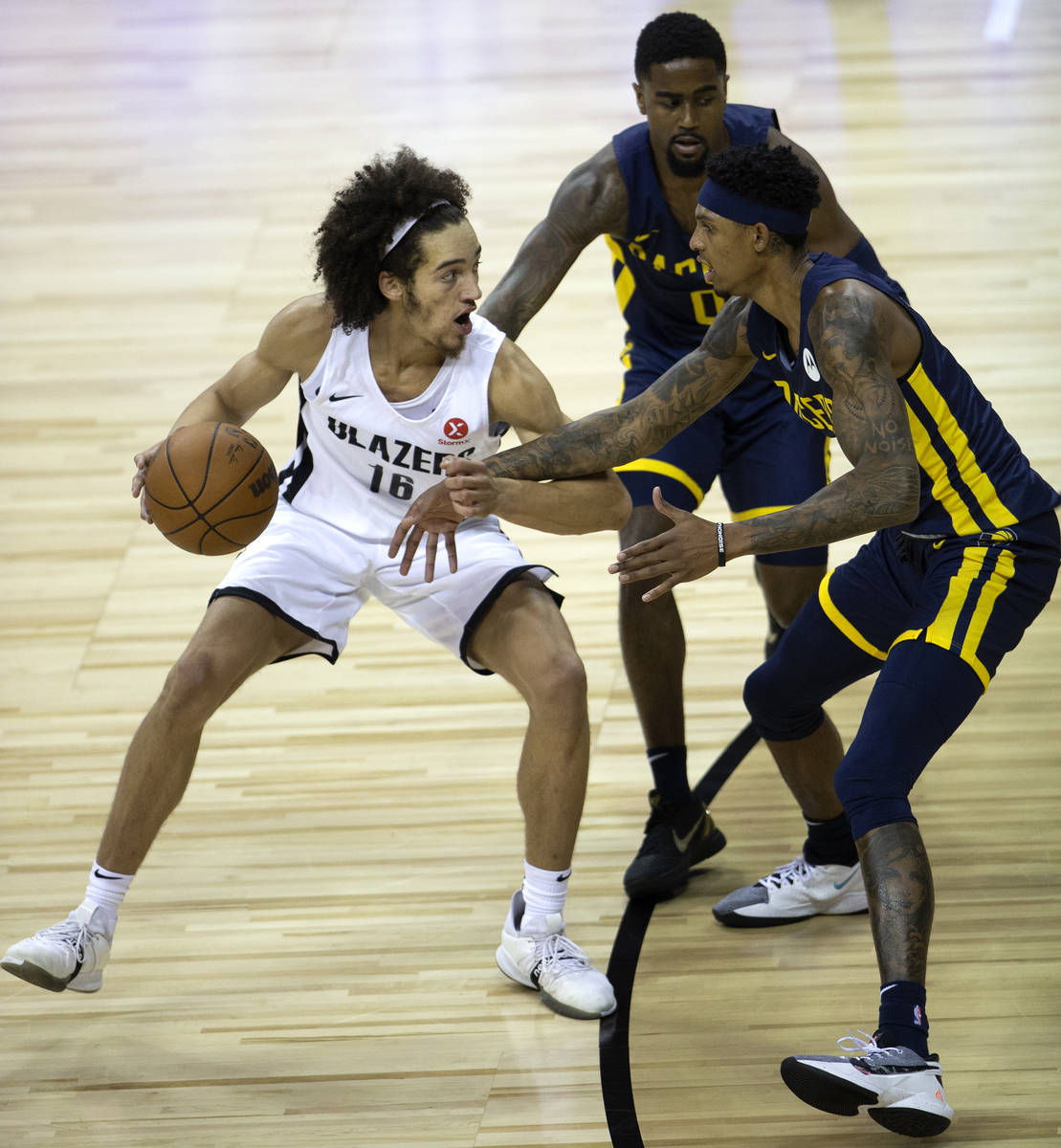 Former UNLV player Derrick Jones Jr. watched his Trail Blazers play the Pacers at the Thomas & Mack Center. Despite going undrafted in 2016, he’s become a highlight reel, which is no surprise for Rebels fans. Jones won the NBA Slam Dunk contest in 2020.

Reigning WNBA MVP and Aces star A’ja Wilson took in the action. She didn’t appear to have her Olympic gold medal on her, bucking a recent trend.

Paige Bueckers, last season’s national college player of the year, also was in attendance. According to the Wall Street Journal, the UConn sophomore could make $1 million a year thanks the NCAA standards regarding name, image and likeness being changed.

The Trail Blazers are as close to a real NBA team as there is at Summer League.

They decided to play several veterans rather than put out a roster full of first- and second-year players.

And the Blazers are playing like a veteran team. At least they were before losing by 33 points on Thursday to the Pacers, which left Portland Summer League coach Roy Rogers wondering if the sun actually would come up the next morning.

The question is why the Blazers went with this approach.

“What happens sometimes in Summer League is young guys tend to press a little bit and take ill-advised shots,” Rogers said. “We thought we could have some veteran players so those young guys could feel comfortable and play more into their role in the regular season.”

On the Summer League roster are 11-year veteran Michael Beasley, eight-year vet Kenneth Faried and fifth-year pro Emmanuel Mudiay. Players who probably thought their Summer League days were far behind them, but Beasley and Faried are doing what they can to find their way onto an NBA roster.

Only three other players on Summer League rosters are in their fifth year or later — the Nets’ Brandon Knight, the Warriors’ Gary Payton II and the Spurs’ Skal Labissiere.

“There are not lot of vets on any (other) Summer League teams,” Blazers rookie Greg Brown III said. “We’ve got the most of them, so they know what it’s like to be in an NBA practice, an NBA game, an NBA locker room. So I try to feel what they’re talking about.”

The marquee matchups typically go to the Thomas & Mack, but easily the best games the past two days were at Cox Pavilion.

Thursday’s opener between the Spurs and Hornets was decided with less than a second remaining on an acrobatic shot. That was followed by a double-overtime game between the Wizards and Nets, which meant a sudden-death ending. The Nets won it on Cam Thomas’ 28-foot 3-pointer. The final game of the night there went to overtime, with the 76ers defeating the Hawks.

Two of the three games at Cox on Wednesday went into double overtime.

Spurs point guard Tre Jones drove the lane, hung in the air and double-clutched before making the winning layup with 0.4 seconds left to beat the Hornets. It was the capper of an outstanding game for Jones, who had 34 points and nine assists.

Thomas of the Nets deserves at least an honorable mention. Not only did he make the game-winner from deep, he also scored 31 points.