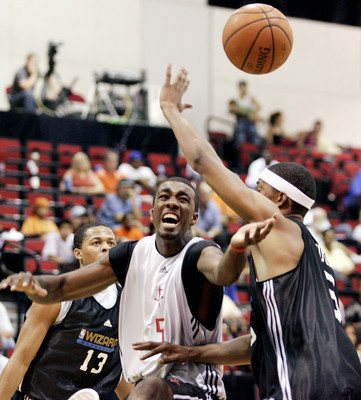 True, Donte Greene was was a first-round draft pick, but not many people outside of Baltimore and central New York state knew who he was when the NBA Summer League began play last week.

But Greene, drafted No. 28 out of Syracuse, has emerged from the shadows with four strong games in Las Vegas.

With the summer league set to wrap up today, the 6-foot-9-inch Houston Rockets rookie small forward has averaged 22.8 points per game — second only to Portland rookie guard Jerryd Bayless (27.7).

However, Greene still must learn to defend at the NBA level.

Otherwise, Greene is going to give up as much at one end as he scores at the other, and that probably would earn him a lot of time seated near Rockets coach Rick Adelman.

“That’s why I’m here, to learn and get better,” said Greene, a Baltimore native. “But I feel like I’ve played well. I’m just trying to work hard and learn the offense.”

Houston traded for Greene because of his ability to create his own offense and finish.

In his first game Monday against Phoenix at the Thomas & Mack Center, Greene had 36 points through three quarters and finished with 40.

Though he hasn’t come close to matching that initial effort, Greene scored in double figures in each of his next three games. He had 17 points against Cleveland and 19 against Denver. On Saturday, he struggled to score 15 on 5-for-19 shooting in an 80-75 overtime loss to Washington.

“It was just one of those days. Everyone has ’em. But I’m not tired or anything. I’ll bounce back,” said Greene, who will get his chance to rebound when Houston (2-2) plays Sacramento at 5:30 p.m. today at the Thomas & Mack.

A second-team All-Big East selection last season, Greene averaged 17.7 points as a freshman for Syracuse. He left college after one year, thinking he was ready for the NBA.

Few teams agreed with him. He slipped to No. 28 as Memphis took him and then traded him to Houston for Darrell Arthur, who was taken at No. 27.

Greene has played angry in Las Vegas this week, determined to show the teams that passed on him that they made a mistake.

“I came to Vegas with a chip on my shoulder,” Greene said. “I felt I had a lot to prove to a lot of people who overlooked me, and it feels good to have played well here.”