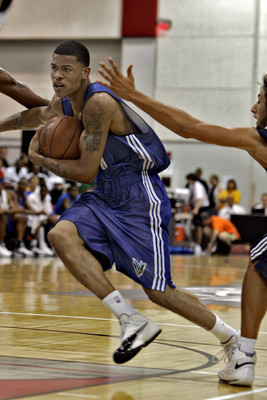 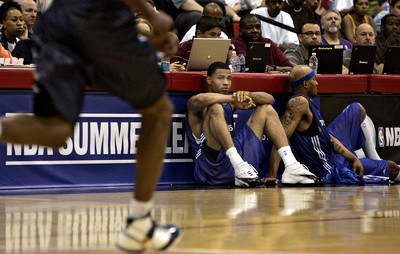 He was coveted by the Boston Celtics and his future appeared secure.

So why was he at Cox Pavilion on Sunday playing in the NBA Summer League?

Because he has to prove himself all over again, even though he’s only 22 years old.

The one-time high school sensation who was a teammate of UNLV’s Wink Adams at Gulf Shores Academy in Houston is basically starting from scratch after his hometown team, the Rockets, released him in the spring.

"I don’t think it’s weird to be back here," Green said after scoring 15 points for the Dallas Mavericks in a 95-86 loss to Golden State. "I’m just grateful for getting a chance."

Green’s fall from grace was steeper than a leap off the Stratosphere Tower. In the past year, he was traded from Boston to Minnesota in the Kevin Garnett deal, moved on to Houston after a 29-game stint with the Timberwolves, then released by the Rockets after just one game.

On July 2, the Mavericks signed Green, a three-year veteran, to a one-year deal at the NBA’s minimum salary of approximately $850,000.

"It was tough not being with a team," Green said. "But I never gave up hope. I knew I could play. I just needed to be more mature on the floor."

The Celtics would go on to win the NBA championship, while Green went unemployed.

"I’m not bitter," he said. "I loved my time in Boston. I’m happy for the Celtics and for their fans."

At 22, his NBA future is indeed at a crossroads.

He finds himself back in Las Vegas, where it all started in electrifying fashion when as a Celtics rookie in 2005, he soared over 6-foot-11-inch Mark Bortz of the Los Angeles Clippers and dunked on him in the second year of the Summer League.

It remains one of the best dunks — if not the best in the five years the league has been in Las Vegas.

That might be part of Green’s problem in his attempt to stick in the NBA. He’s an electrifying, crowd-pleasing presence on the court. YouTube has his top-10 dunks as well as his All-Star slam dunk performance. But he may have earned a tag as a one-dimensional player and he knows he’ll have to work his way past that.

"A lot of people think I’m just a dunker," Green said. "People tend to look at the highlights and judge me on that.

New Mavericks coach Rick Carlisle said the potential reward is worth the risk in signing Green.

"He’s been through a humbling year," Carlisle said. "But we feel he’s a good risk with his age. We know he has NBA talent."

Carlisle said Green’s shooting range, his ability to go one-on-one and his overall athleticism made him attractive to the Mavericks.

"We think he can be effective from the 3-point line," Carlisle said. "We also think with his length and size he has the tools to be a good defensive player."

But it will be up to Green to show the Mavericks he’s more than a dunker if he hopes to stay in the league.

"I think Gerald is starting to understand the difference between being a sideshow performer and being a basketball player," Carlisle said.

"I like putting pressure on myself," he said. "That’s when I’m at my best. But I’m not going to put it all together in one night. I just want to keep learning and keep improving."