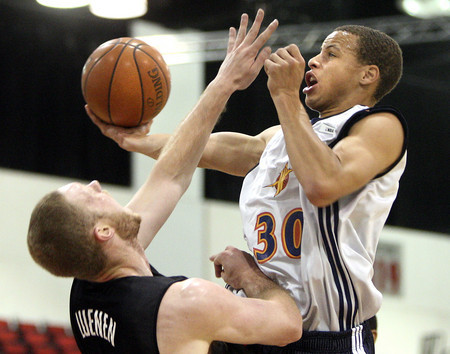 Can his long-range shooting and high scoring carry over to the NBA after a successful All-America career at Davidson? Can he have some of the success his father, Dell, had in the NBA in the 1980s and ’90s? Can he get the Warriors back to the postseason and help make them a legitimate challenger in the Western Conference?

Curry sat down before his NBA Summer League debut Friday at Cox Pavilion — in which he scored 16 points against the Houston Rockets in a 73-69 loss — to discuss life on and off the court.

Q: Why are you a good fit for the Warriors?

Curry: "The way they play, getting up and down, putting the ball in the basket, that’s the way I’ve played my whole life. They have a very talented team, and I can just come in and add something to it. The way Coach (Don) Nelson coaches, I see myself being very productive for them."

Q: The crowd at New York’s Madison Square Garden booed the Warriors for picking you at No. 7. What was your reaction?

Curry: "I was just so excited. It was such a relief for me to go up there after being picked at No. 7 and shake (commissioner David Stern’s) hand. I just blocked everything out and enjoyed the moment."

Q: What did Stern say when you met him onstage?

Curry: "He asked me if I liked the boos, because it was a sign of admiration for me and a chance to show I can handle New York. He said to drown out the boos and enjoy the experience."

Q: Did you feel bad the crowd booed Jordan Hill, taken by the Knicks at No. 8?

Curry: "I thought it was a little unfair. They didn’t get what they wanted, but I know he’ll have them cheering for him once they see him play."

Q: There’s a photo of you circulating on the Internet that shows you with Don Nelson when you were 3 years old? Do you remember it?

Curry: "I remember getting on the Hornets’ plane to go to Minnesota, going to the Mall of America, then going to Orlando and seeing my Dad get knocked out in the first round of the 3-point shootout. I faintly remember that picture, and now it’s weird that I’m going to be playing for Coach Nelson."

Q: Nelson doesn’t usually play rookies major minutes. Why will it be different with you?

Curry: "I’m coming in with a strong work ethic and a great IQ for the game. I hope I can show him that he can trust me on the court and give me significant time."

Q: Would your basketball IQ be as high if your father had not played in the NBA?

Curry: "I don’t know. I grew up watching him play, and I took things from that and I learned a lot. I had a head start picking up things early."

Q: Anthony Morrow, your old high school rival from Charlotte and now your teammate, says you’re the same guy today that you were in high school. How is that possible given your success and fame?

Curry: "I have a great family who won’t let me do otherwise. They keep me humble and don’t let me put too much attention on myself."

Q: You visited the Bay Area in February, when Davidson played at Saint Mary’s. What were your impressions of the place you now call home?

Curry: "It’s different from Charlotte. It’s going to be different for me, coming from the South to the West Coast. But I know the fans are great, and they support the Warriors no matter what."

Q: What was the first touristy thing you did after officially becoming a Warrior?

Curry: "We went to the water and looked at Alcatraz, and we could see the Golden Gate Bridge in the fog. I didn’t realize how cold it was."

Q: Best part of having played at Davidson?

Curry: "Going to the (NCAA) Tournament, getting to the Elite Eight. Ending up on the national stage when nobody knew who we were. Just how small the school was, everyone got to share the experience together."

Q: One of the perks of attending Davidson is you and all students get their laundry done for free. When was the last time you actually did your own laundry?

Curry: "Probably the last day I was home before I went back to school. I got spoiled having my laundry done for me. I guess I’m going to have to learn how to do laundry again."

Q: You seem to be addicted to Twitter. What’s the coolest thing about "tweeting?"

Curry: "Being able to stay in touch with my friends, knowing what they’re thinking and getting those little updates on what they’re doing. I’ve gotten tweets from a lot of people in the Bay Area who are excited to see me play, so that’s kinda cool."

Q: You come from a family of great shooters. Who wins a game of H-O-R-S-E between you, your brother Seth and your father?

Curry: If we play 10 games, I win five, my dad wins three and my brother wins two. I’m still the King of the Currys in H-O-R-S-E.

Curry: "The hashmark on the sideline off the backboard. I can knock that down every time."

Q: What’s the first thing you plan to buy now that you’ve signed your contract?

Curry: "A car. What kind, I’m not sure. I’m into trucks. So a truck will be my first purchase.

Q: The tech toy I had to have right away was …

Curry: "A navigation system. I need to know where I’m going."

Q: My secret weakness is …

Curry: "Candy. Not chocolate. But Jolly Rancher fruit chews. I have a real sweet tooth. Anything with sugar that’s sweet."

Q: My biggest phobia is …

Curry: "Spiders. I was at a camp when I was 13, and I woke up and there was a swarm of spiders. I was the last one in the bunk before breakfast and I had to get rid of them myself. That shook me for life."

Curry: "I’m the best drummer ever on ‘Rock Band.’ I got it for Christmas, and me and my teammates took off on it. I’m pretty good at it."

Q: I’m glad I grew up in Charlotte because …

Curry: "I would have never known where Davidson was."

Q: My Summer League goal is …

Curry: "To take advantage of the opportunity and give 100 percent. I don’t know what to expect out there, but I just want to go out and play hard and have fun."