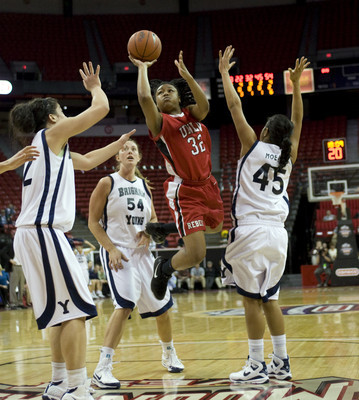 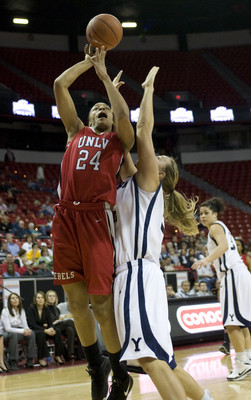 It was Brigham Young. It couldn’t be easy.

After all, UNLV twice appeared to have the Cougars beaten during the regular season, only to watch BYU escape with victories both times.

Not this time. Not in the Mountain West Conference basketball tournament. Jamie Smith wouldn’t permit it.

Smith, the league’s Freshman of the Year, scored 18 points and grabbed 15 rebounds and made a backbreaking 3-pointer with 2:20 left that helped the No. 7 seed Lady Rebels hold off No. 6 BYU 66-58 in a first-round game Tuesday night at the Thomas & Mack Center.

“I wish she was a senior,” BYU coach Jeff Judkins said.

“I feel like our team feels we can compete with anyone,” UNLV coach Kathy Olivier said. “If we can come in with the same kind of intensity we did tonight, I think it’s going to be a game.”

UNLV’s victory was its first in the postseason since the MWC Tournament in 2006. It also was the first win by a seventh seed in the 10-year history of the conference tournament.

Cougars guard Jazmine Foreman then missed a layup, and Smith grabbed the rebound and on the other end made her critical 3-pointer.

“Kind of knocked the wind out of us,” said Shawnee Slade, who led BYU with 15 points.

UNLV made five free throws to ice the victory.

“It was critical to get that momentum swing,” Smith said.

Defensively, the Lady Rebels played zone nearly the entire game to hold BYU to 37 percent shooting, including 27.3 percent from the 3-point line — amazingly close to its season averages.

UNLV’s players wanted another crack at the Cougars after BYU swept them during the regular season. On Jan. 21, the Lady Rebels let a seven-point lead with 4:22 left turn into a 67-62 loss at home. On Feb. 21 at Provo, Utah, the Cougars scored with 1.7 seconds remaining to win, 53-52.

As crushing as those losses were to the Lady Rebels, they came away with confidence they could defeat BYU.

“We said, ‘We hope we play them again,’ ” Olivier said. “Our wish came true. We really stepped up to the plate with a great deal of intensity and a great deal of focus. It was a total team effort.”

In Tuesday’s other games: