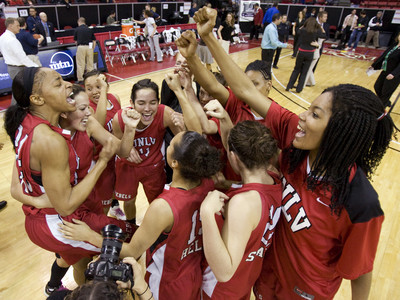 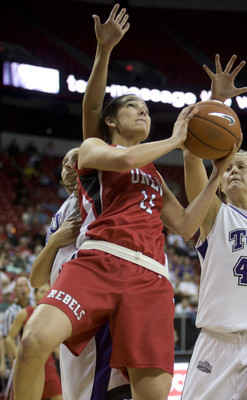 Seconds seemed to tick off like minutes for UNLV coach Kathy Olivier as another big lead began to shrink.

Time, however, remains on the Lady Rebels’ side as No. 7 seed UNLV stayed alive in the Mountain West Conference Tournament with an 84-75 upset of third-seeded Texas Christian in Wednesday’s quarterfinals at the Thomas & Mack Center.

That victory followed a 66-58 win over sixth-seeded Brigham Young the night before.

"Our confidence level has gone up," UNLV center Shamela Hampton said. "Coach has helped us with that. She said we could do this."

UNLV established itself early in both tournament games, leading the Cougars by 16 points and the Horned Frogs twice by 22.

Both games became more competitive toward the end. BYU pulled within three points, and TCU chipped into UNLV’s lead but never could overcome the Lady Rebels’ 15-0 and 16-4 runs.

"It was really a team effort," Smith said. "I mean, everybody was hitting outside. Everybody was grabbing rebounds."

Even Allison Holiday played a key role. Limited to 7.7 minutes per game entering this one, Holiday took over at point guard for Erica Helms for long stretches against TCU. Playing 25 minutes, Holiday made three 3-pointers and had eight assists.

"When I have that chance, I’m going to go and prove to Coach K.O. that I really want to be out there," Holiday said. "I took advantage this game."

This tournament for UNLV has been about taking advantage of situations.

Probably nothing underscores that more than Hampton’s work at the free-throw line. A 60.6 percent shooter during the regular season, she has made 17 of 20 foul shots in the tournament.

The Lady Rebels beat Utah and New Mexico and took San Diego State to the wire.

"This is not a big surprise here that they’re playing very well and playing at home very well," Mittie said.

Center Angela Hartill added 18 points for New Mexico, which plays No. 1 Utah (20-9) in the semifinals.