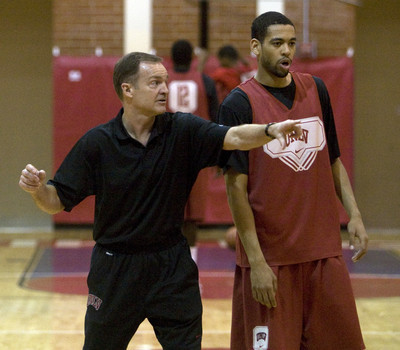 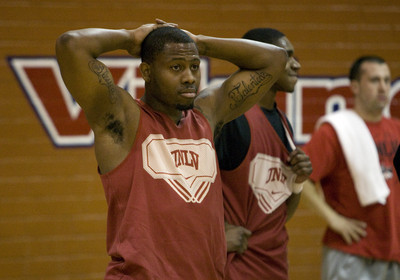 Before their senior season, Wink Adams and Rene Rougeau envisioned a script for UNLV to follow.

It included winning the Mountain West Conference regular-season and tournament titles and reaching the NCAA Tournament. The Rebels blew one opportunity by finishing fifth in the league.

Two more goals — and the two most important — are still within reach. So the script, Adams said, could wind up as a good read.

"Everybody is on the same page," Adams said. "Everybody knows how important these games are to us. We can’t dwell on the past."

UNLV already has lost several important games, but its margin for error no longer exists.

The fifth-seeded Rebels (21-9, 9-7) face a do-or-die scenario against fourth-seeded San Diego State (21-8, 11-5) in the MWC tournament quarterfinals at 2:30 p.m. today at the Thomas & Mack Center. The loser probably will be eliminated from NCAA Tournament consideration.

There is good news for UNLV, which is 31-1 in its past 32 games against MWC opponents at the Thomas & Mack. The bad news is the loss during that stretch was to the Aztecs.

San Diego State is aiming for a season sweep, after beating the Rebels 68-66 in overtime on Feb. 3 in Las Vegas and 57-46 on Saturday in San Diego.

"To beat anybody three times in a row is hard to do," Aztecs coach Steve Fisher said, "and to beat them on their home court twice is even more difficult."

All four MWC tournament games today are rematches from Saturday. Rougeau is planning a different result for the Rebels.

"We’re focused like never before. We’ve had three days of great practices," he said. "Everyone has got to have their mind right. We have no choice at this point in time. This could be our last game.

"This team swept us. We’ve got a lot of motivation going into this game."

But will UNLV be able to find a lot of offense? After scoring only 46 points in each of their past two games, the Rebels need to emerge from their offensive funk.

At this stage, coach Lon Kruger is not about to unveil a new offensive system that will produce more easy baskets and fewer 3-point jumpers late in the shot clock. He continues to preach the same principles — getting higher-percentage shots through more aggressive play.

"We’re not attacking offensively and not making shots. We need to get some shots to go down early to help improve that confidence," Kruger said. "We don’t have a lot of people who are going to score from the low post. But still, we need to get it in there and play a little bit inside-out."

Adams is hoping to emerge from a three-game slump in which he has totaled 23 points and shot 9-for-33.

"We’ve got to be on the attack more and not settle for a lot of 3s," Adams said. "Whenever we don’t hit shots, it’s always tough."

San Diego State’s defense, led by athletic forwards Kyle Spain, Lorrenzo Wade and Billy White, cut off most of the driving lanes while limiting UNLV to 15-for-45 shooting on Saturday.

"We’re looking to get to the rim more. We’re helping these guys out by just settling for jumpers all day," Rougeau said. "Coach has a good game plan for us, so we’ve got to execute it now. We’ve got to jump on these guys early.

"It’s a sense of urgency for us. We’ve really got to pick it up if we want to get to the (NCAA) tournament."

The urgency theme has been talked about often, but it has not always been apparent in the Rebels’ effort.

"You’ve got to see it now," Kruger said. "I know they are anxious to go and anxious to line up and play, and disappointed by losing a couple times to San Diego State."

According to the oddsmakers, UNLV is a 4-point favorite. Adams is ignoring that part of it, because the Rebels have not handled the favorite’s role well from the start.