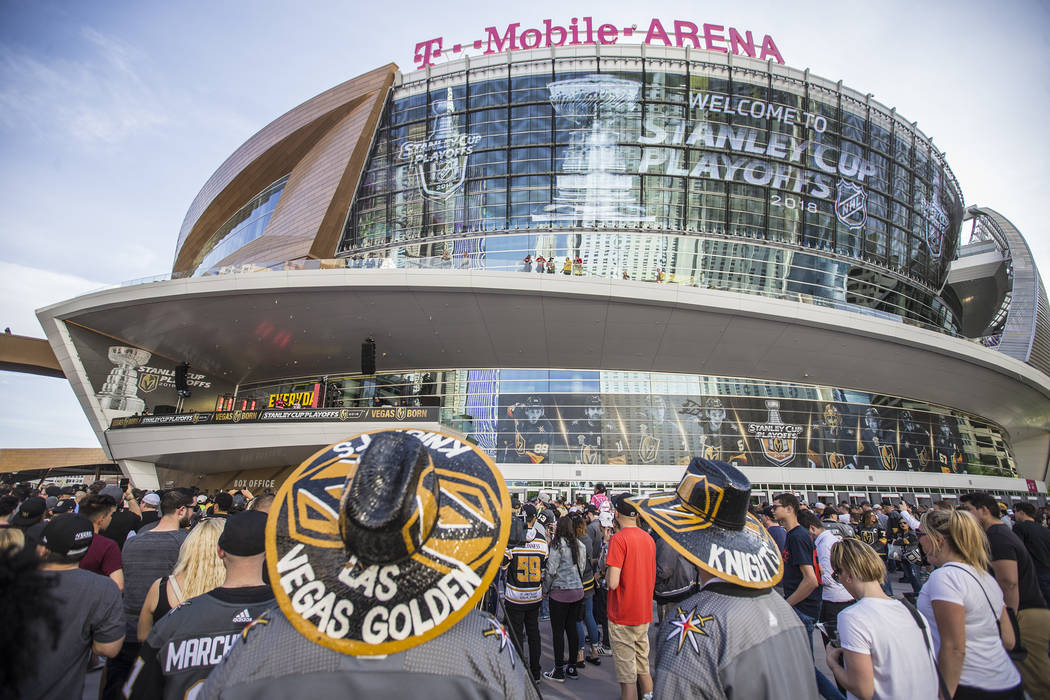 Fans file into T-Mobile Arena before the start of the Golden Knights first round playoff game with the Los Angeles Kings at Toshiba Plaza on Wednesday, April 11, 2018, in Las Vegas. Benjamin Hager Las Vegas Review-Journal @benjaminhphoto 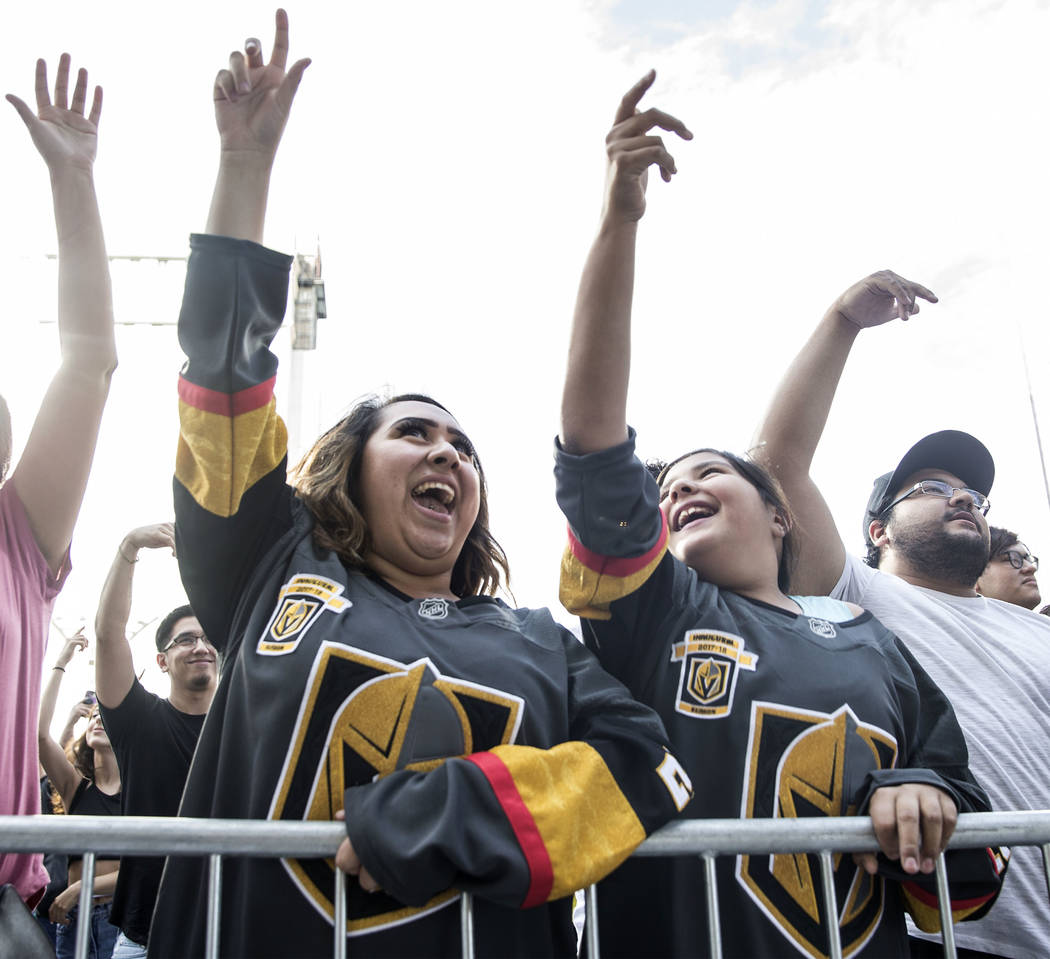 Fans cheer for rapper Logic outside T-Mobile Arena before the start of the Golden Knights first round playoff game with the Los Angeles Kings at Toshiba Plaza on Wednesday, April 11, 2018, in Las Vegas. Benjamin Hager Las Vegas Review-Journal @benjaminhphoto 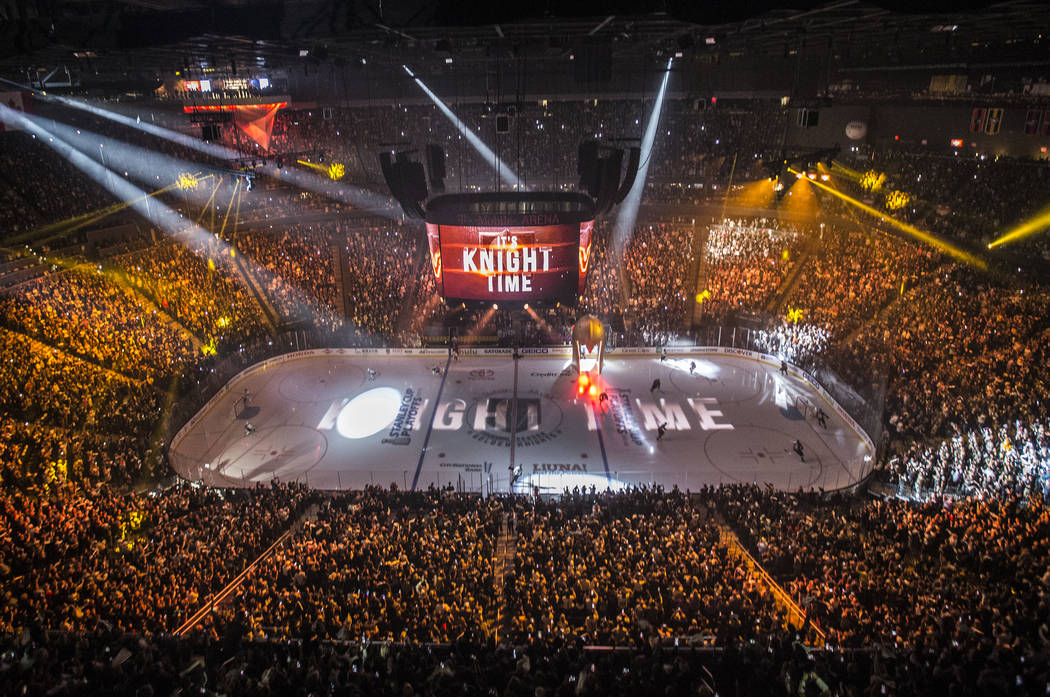 The Golden Knights and Los Angeles Kings take the ice before the start of game one of their first round playoff series on Wednesday, April 11, 2018, at T-Mobile Arena, in Las Vegas. Benjamin Hager Las Vegas Review-Journal @benjaminhphoto 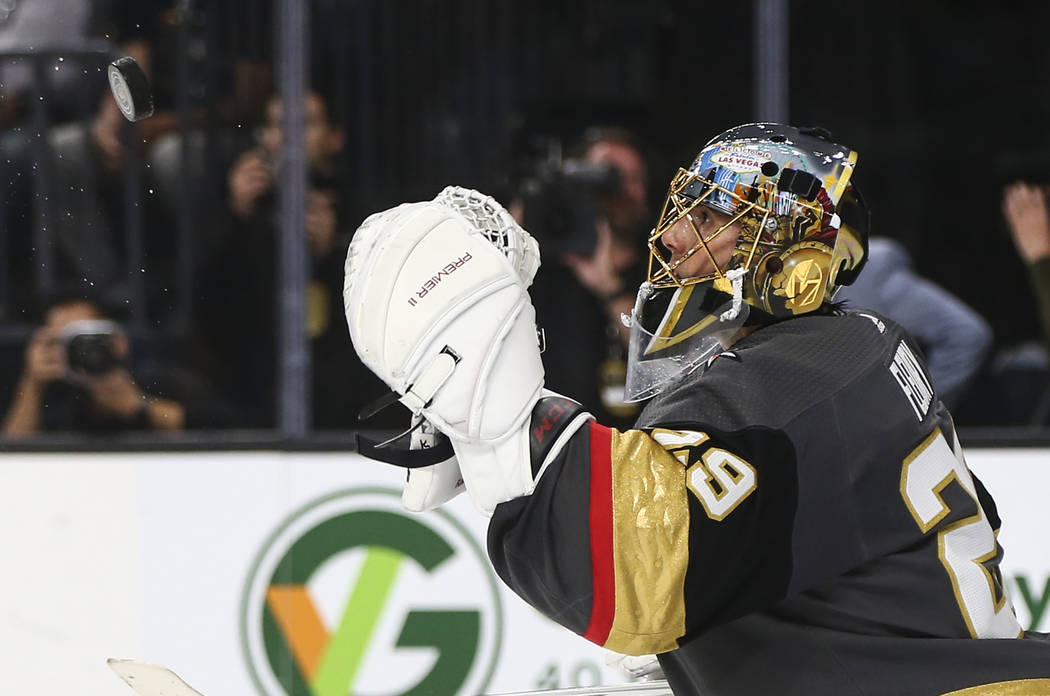 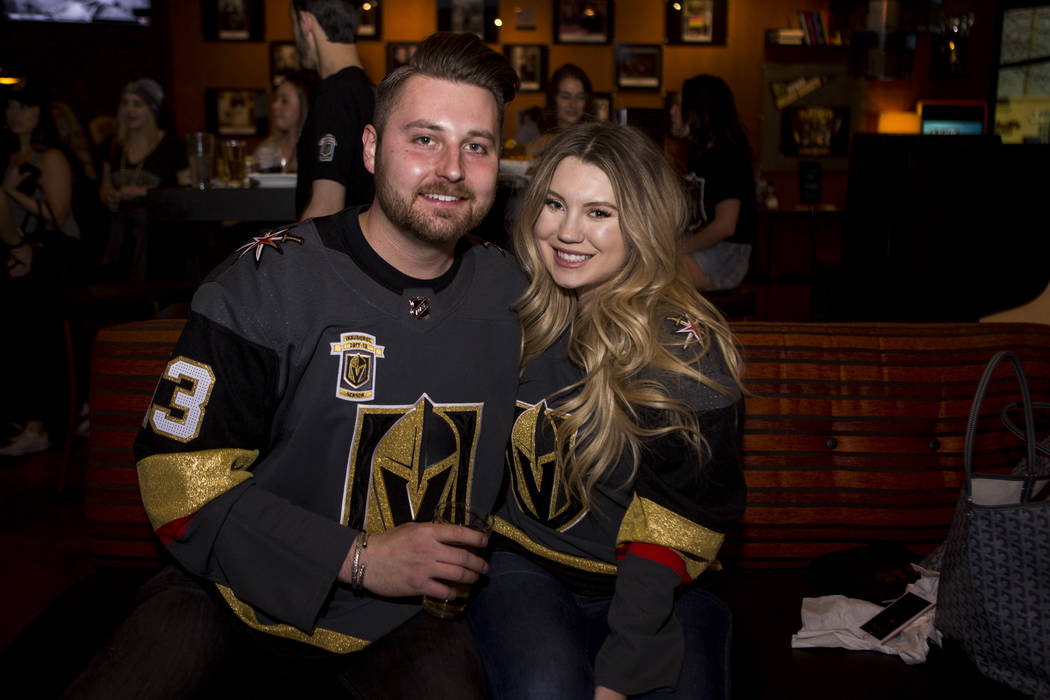 Golden Knights fans Chaisson and Devan Prescott, who were both born in Vegas and met in high school, prior to the start of the team's first playoff game at Born and Raised in southwest Las Vegas on Wednesday, April 11, 2018. The couple has been to ten games this season and watched all the others at Born and Raised. Patrick Connolly Las Vegas Review-Journal @PConnPie

Picture a traditional hockey town, only with better weather.

Thousands of frenzied fans filled the plaza outside T-Mobile Arena on Wednesday for the first playoff game in Golden Knights history.

Dallis Holmes marked the occasion by getting the Knights logo tattooed on his hand at a booth in Toshiba Plaza.

“Because, I love hockey!” he explained.

The $30 tattoos were part of a promotion by Revolt Tattoos, with proceeds going to the Golden Knights’ charitable foundation.

Two hours before the game, the NHL hosted a free concert in the plaza, headlined by rapper Logic. A sea of steel gray, black, gold and red cheered, jumped and sipped their beers along with the music.

Elsewhere, barbers shaved Knights logos into the heads of decked-out fans. A boy with a sparkly gold mohawk skipped along the plaza before throwing a bean bag at his brother’s head in a runaway game of cornhole.

Members of Blue Man Group donned Knights jerseys and performed for the crowd, which made its way inside the arena.

Mandalay Bay security guard Jesus Campos — who was shot by the Oct. 1 gunman outside his suite — received a huge ovation when he was recognized as the Vegas Strong Hero of the Game.

At 7 p.m., the lights went dark inside the arena. “History is made,” the announcer called.

The sell-out crowd waved white towels as the team skated onto the ice through a giant knight’s helmet.

The Knights responded with what proved to be the game-winning goal three minutes into the first period. Richie Colletti, 31, jumped out of his seat and high-fived all the strangers who met his gaze.

One of the women who high-fived him was Darcy Dougherty. She and her husband, Bob, season-ticket holders from Henderson, sat in the back row.

“The energy here is off the charts,” Darcy Dougherty said. “I’m looking for a Stanley Cup. From the very beginning, seeing the excitement, I knew it was a possibility.”

Bob Dougherty said the homegrown team had something important to play for.

Hockey fans who didn’t score tickets to the game gathered in front of TV screens at bars and sports books across the Las Vegas Valley.

Las Vegas native Chaisson Prescott showed up at his favorite neighborhood tavern, Born and Raised on Warm Springs and Cimarron roads, three and a half hours before game time to stake out a spot on an L-shaped couch facing the 160-inch projection screen.

He and his wife, Devan, said they have been to 10 Knights games this season, including the team’s emotional home opener Oct. 10. They have tickets to Friday’s Game 2 at T-Mobile, but for the rest of the playoffs, they should be easy to find.

“If we’re not at the game, we’re here,” Chaisson Prescott said.

By the time the puck dropped, the Prescotts had been joined by about 200 other rabid fans, most of them in Knights garb. When the Knights notched their first playoff goal in franchise history a few minutes into the game, the roar inside the Born and Raised drowned out the bell the bartenders ring whenever Vegas scores.

Bar general manager Ben Burkhalter said the city’s first major professional sports team has been great for business and “a breath of fresh air” for the community since its first game.

“You couldn’t have written a better script for how it’s taken off,” he said. “We finally have something to say, ‘That’s ours.’”

Sara Lohmeyer, a 20-year resident of Las Vegas, enjoyed the best of both worlds Wednesday. First she stopped at Born and Raised, then she and her friends jumped on one of the Regional Transportation Commission’s shuttle buses to T-Mobile to watch the game in person.

She had never been to a Knights game or any NHL game.

“Just learning the game,” she acknowledged as she walked to the bus.

So what if she couldn’t really explain what icing was? She had a team to cheer for now, and she was going to cheer.

As it turned out, her first game ended in victory.

When the final horn sounded inside T-Mobile Arena, Trevor Mills grabbed his girlfriend, Cherly Betancourt, and planted a winning kiss on her lips.

Next year, they will be season ticket holders, he said.

At that moment, the last song of the night played in the arena: “Viva Las Vegas.”